Part Three: My Own Little Miracle

We arrived early for our induction. Dr. Johnson came in to break my water. She took the "crochet hook" instrument and proceeded to make the tiniest opening. I felt the warmth slowly trickle out and as I looked down I heard Dr. Johnson. Oh Sh@#! She exclaimed. Let me tell you, when your very kind and well-mannered doctor swears, you know two things... something just went wrong and your birth plan more than likely just flew out the window...

Or there is a third option. Dr. Johnson is also vocalizing exactly what she has encountered. "Normal" amniotic fluid is clear. What I quickly saw as I looked down was a pool of what looked like "pea soup," pooling underneath me. It was greenish-brown and I knew it was meconium. Meconium is a sign that a baby has somehow been stressed and has had their first bowel movement, in utero.

The rest of the day Murphy's law laid waste to any preconceived ideas I had concocted for myself about this birth experience. I was in bed for the day, tied to monitors and iv's. While priding myself on the ability to breathe through the initial contractions, as the crescendo of fastly intensifying contractions soared to unchartered magnitudes, my ability to cope with grace and dignity intact, waned.

I sent up the white flag and surrendered to the placement of the epidural in my back to assuage the pain. But not without, still another complication. I was allergic to the numbing medication they gave me and now had splotchy red hives breaking out all over. Oh the irony of deadening any sensation from the waist down while activating the most intense fiery itching from the waist up!

And then we were suddenly given the green light. I was 10 centimeters dilated. It was time to push. And push. And push and push and... push some more. On my back. Now on my side. How about on my knees? We carefully orchestrated each position while maneuvering iv's and oxygen masks and blood pressure cuffs and fetal monitors.

An hour passed. Then two. And three. Where was that white flag? And a fork... I was done. Convinced I couldn't do this. The baby was stuck. Dr. Johnson surmised it was facing the wrong way. Up, instead of down. But she kept telling me if she really thought I couldn't, she'd consider a c-section. But she thought I could. She tried the mighty-vac hoping that help with some suction on the baby's head might be the answer. After three pop-offs, she stopped, saying it was unsafe to proceed with any more.

In the meantime, I was deep within myself. I had long ago surrendered to needing some help. I prayed and talked to God, summoning some strength and courage to keep going. But a new thought was repeating itself over and over again in my head. What about that baby? What if he or she is scared too? The baby has been in that tunnel over three hours now. Why might he or she be finding it safer there, instead of in my arms? Because... I knew, in my heart, I still had the tiniest shred of doubt. I still didn't think I could handle whatever this baby was going to bring me. I was surrendered to it, resigned to it. But still not sure I could face it. And it was slowly occurring to me, that I was the one standing in the way of myself. I had to let it all go, every last ounce of it, released. I started blocking out the noises, the lights, the machines. I turned my only focus to reassuring the baby.

And wouldn't it be a beautiful thing to be able to tell you that is all it took and the baby came out? Well it didn't. But something did change. Dr. Johnson had been on the phone with a colleague who had a suggestion. He was coming in to see if he couldn't help "turn" the baby and facilitate the head through the last little bit. And as I had done before, I started to build a foundation of hope. "See baby? Mommy knows how you feel too. Its time we do this, together, no matter how uncertain we both are."

I might have retracted that thought had I known that Dr. C's idea was actually called "forceps." But in no uncertain terms, Dr. Johnson said this was it. And Dr. C said I had one chance. I would push with everything I had and he would turn the baby from face up, to face down. Believing for the first time that I had one chance to show this baby that not only was I ready, but excited to meet him or her, I pushed with renewed vigor and stamina, and the head popped out. While "searing pain" doesn't begin to describe what the forceps feel like, the amount of relief I felt when the head was out was indescribable.

One more push and the baby was out. And after all this time, while Dr. Johnson handed the baby off to the NICU team waiting, nobody remembered to tell me what I'd had! Girl, or boy? And then I saw, it was a BLUE hat they were placing on his head as they took him to be checked. They decided he sounded "chunky" and wanted to get him back to the NICU. They came to us to fill out the card on his bassinet and to let me get my first real peek at him. Nolan James. 7 lbs. 3 oz. 10:47 pm, May 14th, 2000. He was wide awake and alert. My eyes studied his. I slowly took in the landscape of his face, his tiny slender fingers, all that hair. He was perfect. In my heart I had all the answer I needed. Take a look. My own little miracle. 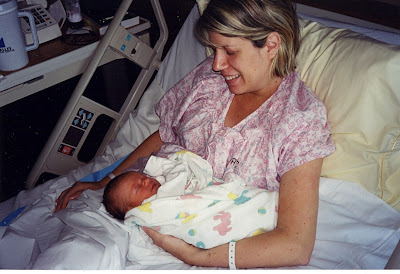 Two hours later Rick returned. Dr. Johnson and the NICU doctors had just finished checking Nolan over. Rick confirmed what we both had had seen with our eyes. They all concurred there were no visible signs of any birth defect. 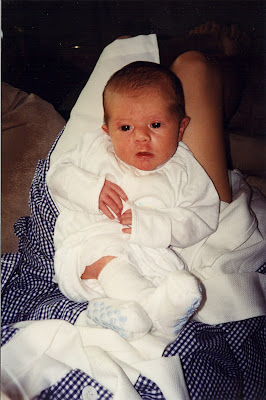 But God hadn't done all of this work in my heart for no reason. I was being prepared. For just what, it would take awhile to unfold. It seems that in a lot of ways, our journey with Nolan was just beginning and being revealed to us. We had truly ended the chapter of this particular story. It turns out the name was not Down Syndrome. And even if it had been? I would unequivocally tell you, this much I believe, every baby is indeed a miracle.
Posted by Vicky at 12:05 AM