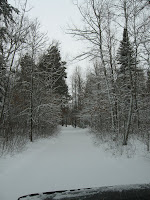 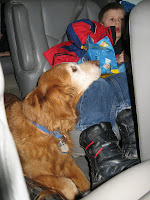 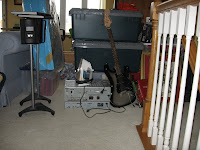 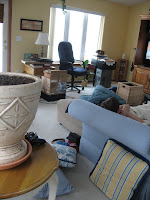 My mom could have sworn she heard that Zone one was being allowed to return home. So we started to pack up yesterday and then did some research. Mom was wrong. Not yet. But soon. So we called a couple of friends who said we had 10 new inches of snow on the ground, but it had stopped for awhile. We decided to head for home. We snapped the first photo as we left the lake. And as you can see Dakota picked a different boy to snuggle close to, although it may have had something to do with the french fries on Colton's lap.

We returned to a mess, but a dry one! While the river levels continue to decline however, they have warned about the possibility of a new crest when all this snow melts and so I am allowed to organize the mess, but it will have to stay upstairs till we're safely through the next crest.

I even talked to my dad last night for the first time since early last week. His voice is stronger and his spirits are good. And to everyone who has been saying prayers for all of us? I have to say I think they are working. Do you know that the hospital my dad is in only started taking patients 15 minutes before he arrived? 15 minutes. Otherwise he would have been transported to Minneapolis. My dad has been hospitalized many times in this hospital. But this time is unique for many reasons. He has two doctors. And he said they both come in and sit down. They shoot the breeze with him and have gotten to know him. And the chaplain came to see him. I could tell that struck a chord with my dad. And then the head administrator came for a visit. Since dad is a bit of a regular there, the administrator wanted to know my dad's opinion on the care he receives there. I am certain my dad was happy to tell him. But I think the extremely attentive nurses have been my dad's favorite thing so far. I heard one telling dad he went all over the hospital just to find the strawberry Jello for dad.

While no one is proclaiming we are completely out of the woods, the sense of relief I feel is huge. The only April Fools joke I have to share with you is that the flood gates still opened. My own that is... I have been a teary-eyed mess all morning. And it isn't that we suffered or lost, or weren't made extremely comfortable at the lake, cause we were indeed. But we've just been under a lot of stress. Regardless of the reason, the tallest of dikes could not have held me back. What a relief, they don't have to.
Posted by Vicky at 8:47 AM