We took Mayor Walaker's advice.  In a press conference Friday afternoon he said "Go out to eat.  Go to the mall.  Fill up with gas and buy groceries.  Rest.  Relax."  Little did he know we had already started.  Nolan's friend Riley invited him to play Thursday afternoon.  They even got to go out for pizza and Riley's very considerate parents took Colton along with Riley's younger brother Sam.  Decompression began to settle in.  When Rick got a dinner invitation for the very next night, we jumped at that chance too.  And Grandma came and sacrificed herself and her Friday night to bail us out of finding a sitter.
We spent a delightful evening with former yearbook colleagues and talked about going to the lake, fishing, raising boys, and we reminisced about the past.  Lorrinda and I used to shop together at the annual sales meetings in whatever location the yearbook company picked for the twice-yearly meeting.  Usually we'd go to places in Florida, California or Texas.  Its one of the things we both talked of missing from our former jet-setting selves.  The last sales meeting we attended together I was 6 months pregnant with Colton but we marathon shopped at the outlet stores in beautiful Palm Springs anyway, on a mission to find appropriate fitting shoes for my swollen-larger-than-normal feet.  The search was complicated by trying to match the shoes to my less than glamourous "tent" dress I was wearing for the formal awards dinner. 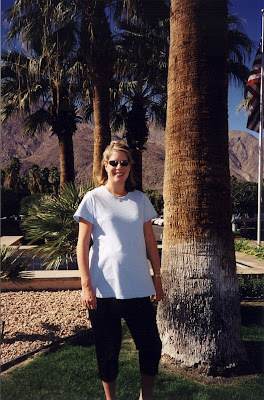 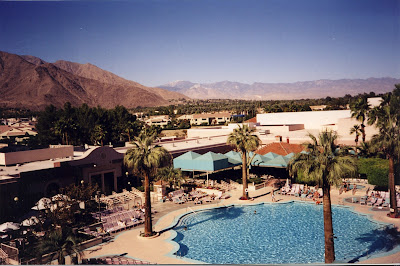 I also spent a quiet morning by the pool while in Palm Springs, writing in my pregnancy journal. The water was so blue and inviting. And I wrote about how it wouldn't be long and I could introduce Nolan to swimming in a pool. That my days of sideline watching were going to be put on hold. So I soaked up sun and stillness, and intermixed shopping with slumber and solitude. While reflecting on the changes occurring with folding another child into the mix, I had no idea the deeper changes at work. For what I didn't realize, is this would be the last meeting I would attend. A mere year and 1/2 later after welcoming our second son we would be moving, changing careers and ending a chapter in our lives.

The rest of our weekend has been filled with cleaning out some closets and creating a path-way through our belongings now occupying the main floor.  Rick left yesterday for a trip to Idaho and the boys and I are spending a quiet palm Sunday together.
If it weren't for the rest of the news contained in the press conference last Friday, I would say we were returning to normal.  The part that I am turning a blind eye to, for now, is the news on the second crest.  With the new snow and still-unthawed ground, the national weather service has calculated a 75% chance of the river reaching a new crest of 41 feet and a 25% chance of reaching a crest of about 43 feet between the middle to later part of April. The first crest was at 40.8.  You see how this isn't the kind of news we hoped to hear.
But I will tell you, there are more disagreements over this prediction.  The Fargo Mayor, for one, disputes these numbers.  He worked hard to assuage the fear quickly rising up through the restored calmness. I choose to believe him for now.  I am taking the weekend off, if not more, from thinking about another wave of flooding.  From the looks of the tranquil streets, I'd say most people are.  But you probably haven't heard the last of it yet...