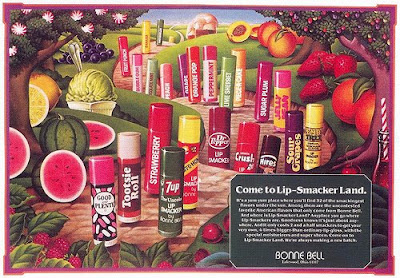 While I found a lot of references to the two c's ,cleaning and church, in my diary from 1977, I also read about cosmetics I haven't thought about in years. Does anyone remember Bonne Bell Lipsmackers? For Christmas that year I received Dr. Pepper and bubble gum flavors. Later on, I realized Dr. Pepper had the slight tint to it and it became a staple in my "forbidden" make-up regime. And oh how I longed for Love's Baby Soft perfume! I eventually settled for Sweet Honesty while my mom picked Jontue as her scent. And since I was sporting the Dorothy Hammill wedge haircut, I most definitely insisted on Short and Sassy Shampoo.

We played the games Pay Day, Life, and Yahtzee. We spent summers at the lake, where we swam and roasted marshmallows for s'mores. We put baby oil on our skin and baked in the sun. We rode our bikes to the library and up to Tempo, which was an older version of Target. We ate Tastee-Freeze and went to Sher's Kitchen for homemade caramel and cinnamon rolls. (Sher's was known for the SIZE of the rolls, which covered a dinner plate, as well as their gooey goodness. In college, in fact, it was a freshman rite of passage to be woken from sleep your first week on campus and be taken for rolls at Sher's in your pajamas at 2 in the morning. It was like saying "Welcome to college life, you didn't expect to sleep did you?)

My diary was riddled with notes about Sunday school and church. And watching Love Boat and the movie Freaky Friday with Jodie Foster. I laughed when I read about Easter, and wrote that "the Easter Bunny, which is mom, left us candy in our baskets." Ha! But the day that had me in fits of laughter, was the day I turned 10. I can seriously do an entire post about the jinx of my birthday. Let me give you an example, the day that John F. Kennedy Jr. died in an airplane crash? My birthday. My 4th birthday I spent in the ER having my toenail removed after getting a cement brick dropped on it. The day that Great Grandma Julia died? My 7th birthday. So it should not have surprised me to read about the elaborate plans for the birthday party planned at the lakes. My cousins were coming and our friends from the lake. We had food and cake and anticipation... and only 1 thing missing. Me. I was in the ER 45 miles away, with strep throat. We have one feeble attempt at a picture of me with flaming red eyes and cheeks trying to smile and hold up a cake. Ahh, the good ole days.

I'm left with a craving for a caramel roll and ice cream from Tastee-Freeze. What year were you in 4th grade?  What are the scents and flavors that take you back to that time?