All that melting snow has to go someplace. In 1997, the Red River Valley and surrounding areas suffered 3.5 billion in flood related damages as the Red River flooded its banks in the worst flood since 1826 according to Wikipedia. This weekend we are engaged in preparing our house for the possibility of flooding, as the community as a whole starts filling sandbags and building dikes to help keep the overflowing Red River at bay. While water may encroach upon 40th avenue running past our house, it should only come within a block of our house or so. But we still have to be vigilant about our sewer system's and lift station's ability to keep up with the deluge of water. We are scrambling today to find an adequate battery backup for our sump pump should it either quit working or the power get shut off to it in a power outage. Rick enlisted the help of his parents who are on their way to Bemidji, MN which is maybe 3 hours away from us, to look for the battery and some much needed sewer plugs for our basement.

This morning we asked both boys to clean up all the toys on their floor. With Nolan's room being in the basement he especially needed to get everything up off the floor. Lickety-split he was done. Promising there was no mess he was okayed to go ride bike to his friend's house. When are we going to learn? Just see for yourself what an amazing job he did. 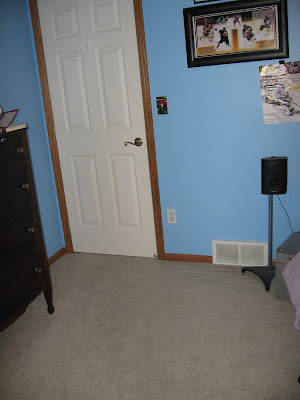 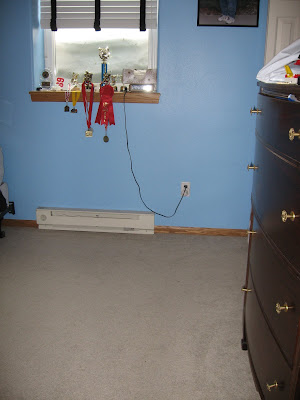 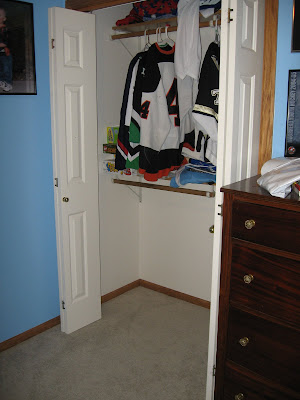 Its passable. The floors are indeed clear of any objects. But just where do you suppose all of his stuff went? Think eight-year-old- boy who just really wants to go and play with his friends and you might conclude where the most logical place would be to put all of your things... 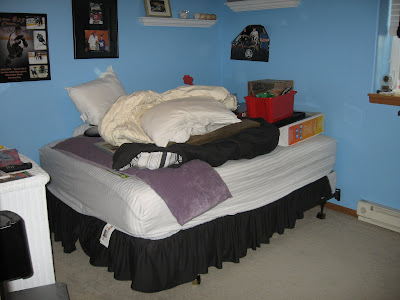 Brilliant. Now the only thing on the floor tonight will be Nolan.
Posted by Vicky at 10:27 AM