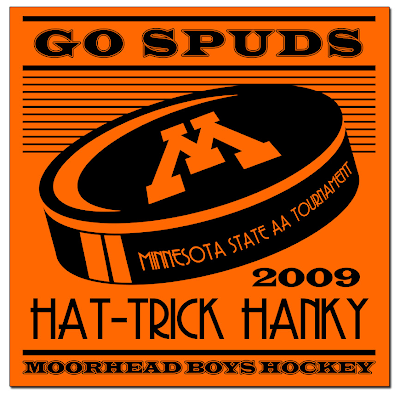 We're getting ready to cheer on our Moorhead Spuds Hockey team at the Excel Energy Center in St. Paul, MN., this Thursday night.  Luck of the draw has our team facing the number 1 ranked team in the state, Edina.  It'll be on the edge of our seats hockey to be sure.

In honor of the teams accomplishments, Rick and I came up with our own take on the "Terrible Towel."  We had the idea for a hanky to wave and cheer on the team with.  But what should we call it?  Having a friend who teaches at the high school provided us with the perfect answer.  Within a short time of me proposing asking the students, she called me.  One of her students called out "Hat-Trick Hanky" and we knew as soon as we heard it, that was it.

Thanks to the help of our talented photoshop guru, Jena, who designed the concept for it, we picked up our first batch of Hankys today... and promptly sold them.  Hopefully we'll be able to pick a couple up tomorrow, depending on how bad the blizzard gets.

They've cancelled school and the highways are closed.  They are predicting temperatures below zero and up to 60 miles per hour wind speeds.  And a mere 7-14 inches of snow.  Yuck.

I've been getting some funny "material" lately from the boys.  I wrote some of them down because my brain could not keep these tidbits for more than a second or two.

Last week I was dusting and Colton was  playing with his Star Wars Legos.   One of his "droids" was resting on top of the tv.  As I was dusting I went to move it to be with the pile below and Colton saw me.  "No, you can't move him," he said. "How about if I just lay him down over here I said?" "No, you can't move him, cause he is dead." "Well, how about if I just rest him on the ledge for a bit?" In total exasperation, Colton said, "But mom, he is up there away from the others because he is in Heaven. Please don't dust Heaven." Boys rule number one, there is no dusting Heaven.

On another day last week the boys were playing in Colton's room. I heard a door shut. Then silence. Any good mama knows that is secret code for "better go investigate." As I walk down the hall I hear giggling and shrieks of laughter behind the bathroom door. They've migrated I see. The door is locked. I tell them to come out and I go to answer the phone. A couple more minutes pass and Nolan comes around the corner, soaking wet with a towel in his hand and only his underwear on. "What the heck?" I ask him. "Oh we were just playing a game in the tub. We put water in a cup and spit it at each other and didn't want to make a mess." So I am groaning and thinking as he stands there in his underwear, they must have soaked their clothes. "Nolan, are your clothes all wet?" "Oh no mom, he says with a big smile, we were totally naked!" Boys rule number two, just take your clothes off before you spit water on someone.
Posted by Vicky at 9:00 AM