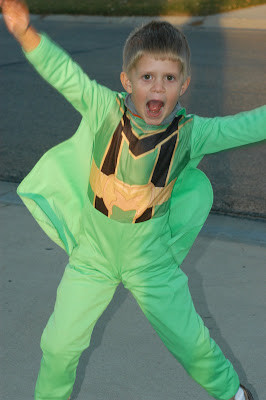 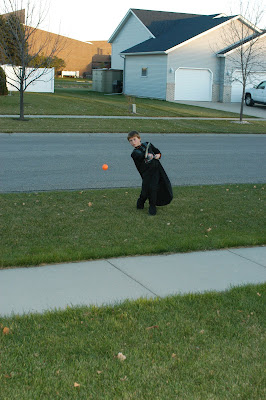 After 8 years of Halloweens with Nolan, we've finally figured out he has a "script" for it. Ironically, his first Halloween was probably the smoothest although we as young parents just didn't know it yet. He was a pumpkin his first Halloween and due to the time change by the time it got dark outside and trick-or-treaters started coming to our door, he fell ASLEEP and promptly missed the whole thing. We were so disappointed. By the next Halloween I was newly pregnant with Colton and in the throes of "morning" sickness which came and didn't leave until I went to bed and promptly became known as all-day sickness in my world. We decide on an impromptu visit to Minnesota and my sister-in-law, Missy loaned us a fuzzy lion costume for Nolan. And act like a lion he did! He clawed at it trying to get it off. He howled and whimpered and finally roared until we took it off. I recall the pathetic looking picture we managed to get of one worn out nauseous mom struggling to hold her little lion cub and in the meantime throwing up prayers for the next baby to be a girl! Princesses don't roar, do they?

And so the saga began. The next year Nolan decided on a buzz light year costume and Missy came to the rescue again providing a tricked out buzz costume. And although we practiced every day for a week trying it on and getting used to it come Halloween night our little buzz never saw the light of day let alone the outside of our house.

I stopped being able to remember exactly which year we finally made it at least around the block once but not without at least one complete meltdown before we got outside of the house. And so each year there has been progress. When Colton came along he may not have been the "girl" that I had hoped for, but he was the sweet, flexible, easier temperament that has been a breath of fresh air for us all. And he helped smooth the way. He was the one not afraid to go up and ring the doorbell as Nolan cowered behind him. Little brother led the way and slowly big brother gained in courage.

And as for mom and dad? Well we have grown some very thick skin and a sense of humor which was needed last night...again. Nolan was in perfect form. He was ready in his costume by 5:05 pm and couldn't understand why we declined to take him just yet. We finally told him he had to wait for the universal signal, the outside lights on the house had to come on... and he just couldn't take it any more. He went in the house and took off his costume and proclaimed Halloween OVER. But much to his dismay, mom and dad have now been around the block a time or two and only stood outside laughing in an all knowing fashion.

The few photos I snapped say it all. We knew better than to try and force too much. So I snapped a couple of Nolan in an appropriate Darth Vader costume, taking some of his aggression out with a ball and his hockey stick. And Colton, completely oblivious to the shenanigans of his brother, was gleefully happy in his green power ranger costume and without any prompting leapt for joy when the camera was pointed his way. They have such different ways of being in this world. I would say one is a little bit more of a "trick" and the other is a little bit more of a "treat" and it takes the two of them to make our Westra World complete.
Posted by Vicky at 10:13 AM