My little slice of Oprah. 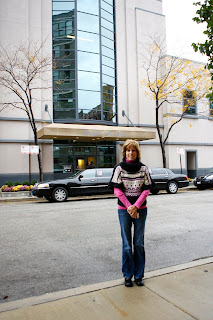 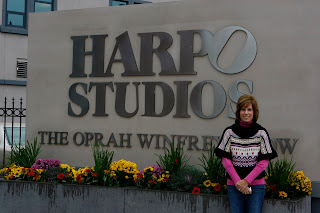 Its no secret. I abandoned soap operas just after college. But me and Oprah? We go way back. And I'm still devoted. Hopelessly. I used to dream about what earthshattering thing was going to happen in my life, you know, so I would be worthy of being on the show. And by earthshattering I don't mean tragic. I didn't want to cry... just you know, make her want to be my friend back! I even thought long and hard about what I would say to her. Think about it. If you were to meet your favorite "celebrity" on the street and had a chance to say something, what would you say? And as the words eluded me time and time again, my perspective began to shift. If you were to ask me today, I'd just as soon light my hair on fire than be asked to be on stage, in the spotlight or be the center of attention.

So I was oddly content to visit the outside of the studio last week. The audience had just been let out of an afternoon show. Will Smith had been her guest and by all accounts has an amazing movie due out soon. The atmosphere was joyful, energized, and fun to be around. I'll admit that my heart was pounding a bit at the mere thought that only a concrete wall separated ME from HER. And I would certainly not be against tickets to the show to be part of the audience, just so we're clear.

I also think I may have figured out what I would say to her. For the longest time there have been some MAJOR differences in our past. Her history was not my history, we were on opposite sides. But what I have come to realize, with the election of Obama as our President elect, MY future is HER future. In major ways, all the important ways, Oprah and I are closer together than ever! Now, if only she knew!
Posted by Vicky at 12:38 PM