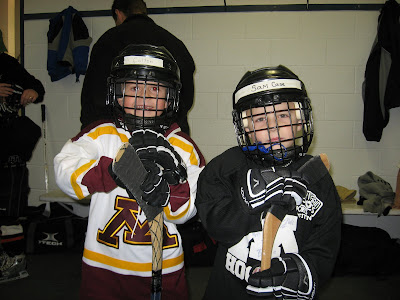 It was our hockey jamboree this weekend. The boys are in two different levels. Colton, pictured here with his friend Sam, is a second year Rookie. He will skate with the canadians this year. The commitment of a parent with a rookie is really pretty basic. One hour of practice on Wednesdays and one game on the weekend, november through the end of March. For the jamboree this weekend they got to skate in two games.

It starts to get a little trickier the higher up in levels you go. Nolan is a second year Mite. He will skate with the blackhawks this year. He practices two days a week, Tuesdays, and Fridays. His games are on Saturdays and Sundays. For his jamboree he had three games this weekend. Next year they say is when we will get the true test of a hockey family, traveling, when Nolan moves up to squirts.

Every year the players and their coaches go through a "draft" to pick teams. There are about 8 teams of 12-14 kids per team at each level through squirts. The draft is used to ensure that the teams are pretty evenly divided. Then each team is assigned a color for their jersey. We won't even have their jerseys for another week. But Nolan was a little bummed that he was assigned to the white team again this year. What he really wanted was to be on the "black" team which has had a reputation for being really good each year for some odd reason. Well guess who got drafted to be on the black team? Colton. And Nolan's response? "Oh Colton, you're going to be REALLY good this year." The power of the black jersey I guess.
Posted by Vicky at 12:53 PM