In a sports column from this summer, Mike McFeely, a sports columnist with the Fargo Forum newspaper, reported being somewhat skeptical that the elusive Mr. Chen even exists. Rick and I got a big laugh out of this. Indulge me another long story.

Mr. Chen is a sports enthusiast, financier/entrepreneur, that at one time owned a CBA basketball team called "The Fever", here in neighboring Fargo, ND. But he was a quiet man. A smart and humble man that didn't like the spotlight. He'd quietly fly in, make arrangements, and leave. He was as behind the scenes as you can get. And yet he was passionate about the sports world. And for some reason, Rick, being all of 21 years old, heard that Mr. Chen was also a baseball guy, and one day Rick, came in contact with Mr. Chen and shared with him an idea he had for bringing minor league baseball to the FM area. It turned out to be not the right time, and Moorhead wasn't the place. (Years later, with a whole different cast of people, we now have the FM Redhawks).

But a conversation had been started. To this day, we don't know what the spark of interest was. Yes, Rick and I both worked for Mr. Chen's team, the Fargo Fever which made a go of it for a few years. But basketball wasn't the main connection. Rick and Mr. Chen talked on the phone many times sharing ideas and stories and memories of baseball. And again, on a whim, Mr. Chen extended an invitation to Rick and I to come and "visit Chicago." We were young, eager, hungry for adventure, and in conversation one day Rick told him we would take him up on his offer and we would come to Chicago.

Did I mention we were Naive? We arrived in Chicago and called Mr. Chen at dinner time. He invited us to meet him at his house before dinner. I recall there was a huge amount of some kind of construction going on at one end of the road that he lived on and he warned us about. We made our way around and found the correct address. The houses were somewhat secluded from the road and set way back on the property. We found his house and were welcomed inside. As he was on the phone we chatted with his wife and were ushered into the family room. I noticed the slot machine collection at about the same time Mrs. Chen asked if the Jordan's construction site had posed a problem for us. We said no without reading much into it.

As Mr. Chen got off the phone he grinned when he saw us admiring the slot machines. Apparently he was a Las Vegas fan as well. The machines were real. And they were dripping with quarters. He urged us to play... but I was too busy trying to compose the thoughts of my whirling brain. Dinner plans were made and he offered to drive. We were ushered into his SAAB and off we went. His wife reminded him to avoid the construction, and Mr. Chen laughed. He shared with us that Mrs. Jordan was adding on to the house and it was a good thing that Michael had purchased the lot on the end with enough room. (Did you catch that? Yes, as in Michael Jordan. As in Air Jordan. ) My whirling brain was in high gear by now. But it paused long enough for him to share with us that he lived in the "perfect" area. "To the right his neighbor was Phil Jackson, coach of the Chicago Bulls, and to the left of him was Mike Ditka, coach of the Chicago Bears." Now he said this, not to impress, really, but truly, wasn't it the perfect place for a sports enthusiast to live, sandwiched in between these iconic sports figures?

The rest of the weekend unfolded in a blur of activity and a complete unveiling of just who this mysterious, humble, quiet man was. He seemed to take great delight in showing us around. There was pride in everything, but he was not boastful in any way. For the unimaginable wealth he possessed, he was a really down to earth warm person. The next day we toured one of his bars, Sluggers. He was having so much fun, he insisted we try the new thing they were all doing at the bar... I kid you not. There we were, at 11:00 in the morning doing Jello shots with Mr. Chen! Speaking of whirling. Anyhow, next on the agenda was the creme De la creme of our plans... tickets to watch the Cubs play at Wrigley Field. Mr. Chen was a season ticket holder, 7Th row up from the dugout. (He even gave us the tickets for the next game and said we could scalp them and pay for our trip, but we were hooked on the Cubbies.) 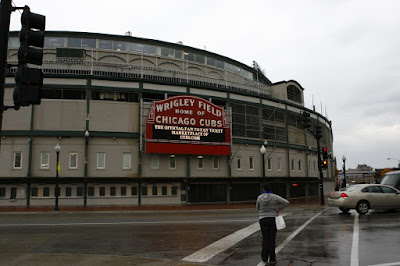 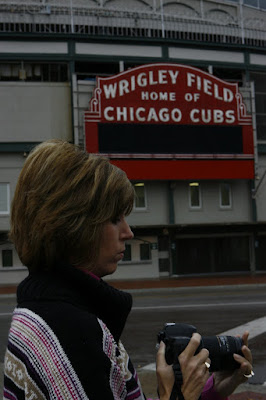 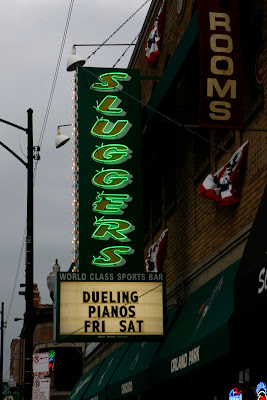 After the game, two tall beers and a hot dog later, he took us for, what else? Chinese food! As he is generously ordering the food and plate upon plate begins to arrive, he excuses himself to the restroom. The waiter comes to us to ask if everything is to our liking. Yes we respond. Good he says, he wouldn't want to disappoint the restaurant owner's guests. I think its safe to say I was officially spinning by now. On our way back from the restaurant Mr. Chen shows us the last little part of his Chicago. Driving along the "Magnificent Mile" he points out skyscraper after skyscraper that he has "collected" over the years.

This is what I make of the whole surreal experience. Mr. Chen was a generous man. He came from humble beginnings. He saw something in a young man he connected with. He took a chance too, in extending himself. He asked for nothing in return. He just seem to delight in showing two young and impressionable kids that dreams can become reality. Even big ones.

I process things slowly sometimes. It hit me the other day. Perhaps, giving to Lake View Academy the other day, was really a full circle moment. We were simply given an opportunity to pay back an old debt to a guy who had at one time taken a chance on us when we were young and impressionable. What comes around, goes around. Sometimes its years in the making. But you really never know how what you do today will affect someones life in the future.