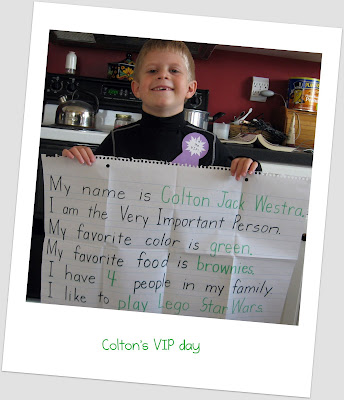 Colton was the VIP in his class today in Kindergarten. The date has been inscribed on our calendar since the first week of school. He took it so seriously! Yesterday, in preparation, he wanted a HAIRCUT. This coming from the little boy that used to require THREE suckers to sit long enough for a few snips. He carefully edited my choice of clothes for the day and ended up deciding on a black Nike under armour type of shirt with jeans and his new slip-on shoes. And even though I offered to give him a ride to school along with his brother he wanted to take the bus to be sure to get to school extra early! This is a boy after my own heart.

We had the most FUN picking out all the things he wanted to include in his shiny tinfoil-wrapped shoebox he was supposed to share. Of course there were lots of pictures. And hockey pucks... the autographed ones of course. And his first hockey trophy from last year... which is really just a participation trophy but I am not bursting that bubble anytime soon. He also threw in a couple of golf balls and one dolphin webkinz named flippers. And then he came home with a big sheet of lined paper with all kinds of sentences about him, you know, like HIS story. He also had a little ribbon taped to his shirt. But in typical Colton fashion he didn't really want to TALK about it when he got home. Plus it took 3 jolly ranchers for him to agree to let me take ONE photo. Hey, some things will never change and he is clearly a boy still after my own heart!
Posted by Vicky at 12:51 PM