If the Sports Reporting is Wrong Tonight, Don't Blame Me!

Welcome to the Jungle...

We went to St. Cloud State University today to watch our Moorhead Spuds compete in the hockey section semi-finals. The boys "rocked out" most of the way down there.

Rick didn't have anyone to help him videotape the game today. He talked me into doing it by telling me how SIMPLE it was to do it. He set it all up on a tripod and hooked up the camera to a big monitor and told me to just follow the action of the puck. Sounds easy enough. But then they dropped the puck and actually started skating and holy crap was there a learning curve involved! For one thing they are fast, and the puck is tiny and trying to keep it all in the frame was no small feat. I can't tell you how many times I'd be following a player with the puck only to have him emerge on the other side of the rink... WITHOUT the puck! It had been stripped away and was already on its way back the other way before I caught up with it! Now all of this Rick told me how to prepare for, so I did catch on with practice.

What he didn't prepare me for was working alongside a sports reporter for our local news station. I recognized him instantly and he went out of his way to introduce himself and chit chat with me. But then Moorhead scored a goal. And I was concentrating so hard on capturing the play, the sports guy's question caught me a little off guard. He said "can you verify for me who YOU saw?" Thank goodness he didn't whip out the microphone on me, but he did lean over his pen and paper waiting for my response. He nodded when I told him what I thought I had seen.

Okay, this EASY job was coming with a little bit of pressure. He started asking me more questions. Was he mistaking me for a professional? I mean he had to have known in reality, I am The Wife of the guy who is the professional, right? Uh, maybe not.

Period two, another Moorhead goal. Colton who is standing next to me cheers for Braden, just as the announcer, tells us its Jordan who scored. Oh know, camera guy is leaning over my way again. It WAS Braden, right? I am now relying on the wisdom of my six year old when I tell him, yeah, Braden. Low and behold a few minutes later, the announcer tells us it was Braden, not Jordan who scored the goal. Finally Moorhead scores their third goal. This time I am ready. I not only have it perfectly on tape, but I have the name and number of the player. He smiles at me this time when he says "now that one, I saw clear as day, no controversies on that one." Figures. 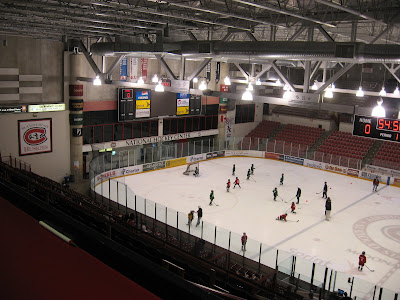 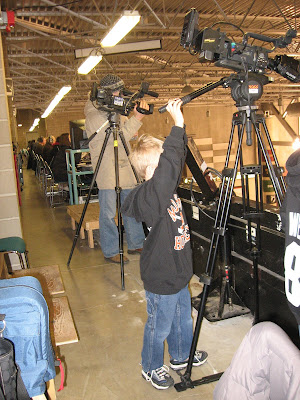 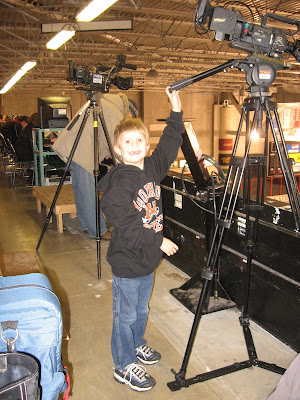 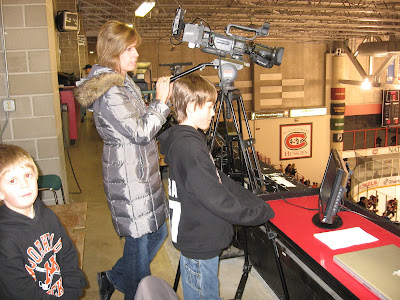 I was somewhat relieved when the game was over and Moorhead wound up winning 4-0. I'm going to go and watch the sports soon. If for some reason, the sports guy doesn't get the names exactly right on all of the plays, don't blame him. Really, you never can tell these days just WHERE they might have gotten their information!
Posted by Vicky at 8:38 PM