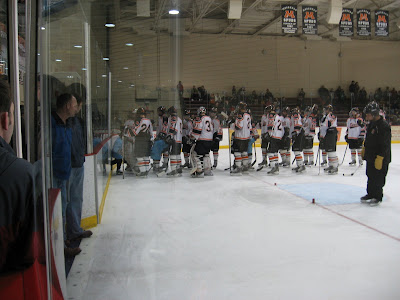 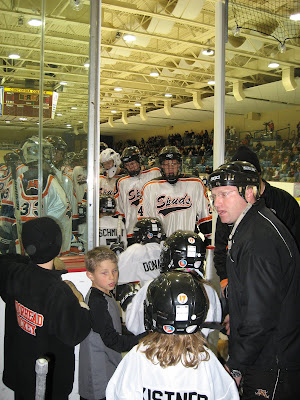 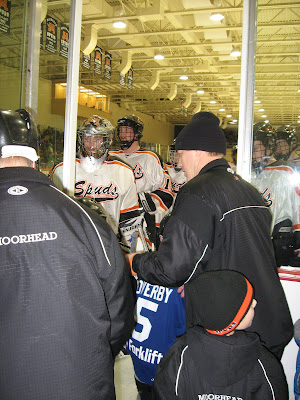 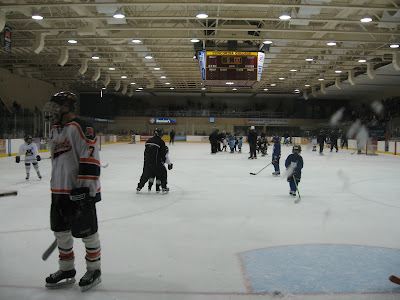 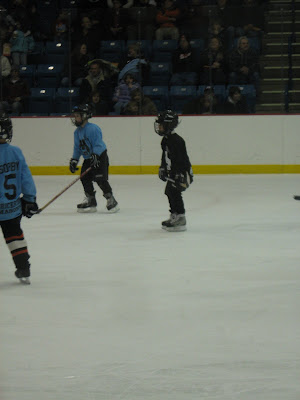 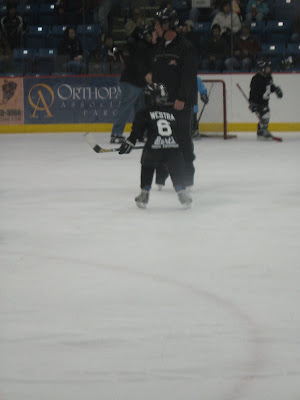 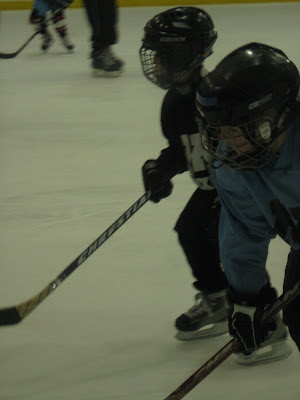 Every year our youngest hockey players get to skate in-between periods of a boys high school game. They get about five minutes to go out and skate in front of a big crowd of people. Its orchestrated chaos as 8 teams of 15 players each, assemble to go on the ice.  As the first period comes to an end the coaches set up 6 nets crosswise on the ice, drop the puck and get out of the way.  And the crowd goes crazy. Our boys have participated in this for 5 years now and it never gets old. But it makes for a long and very late night for two little boys. I hope to have pictures up soon! Soon turned into this morning, oh well.  It really was late.
So let me explain.  Our little boys really idolize and worship these big boys.  They want to wear the same coats and hats, have the same sticks and skates and look just like these boys.  At every game our little boys line up by the locker room door and hold their little hands up to give these big boys high fives.  Every time the high school players walk to the ice and are coming off the ice all the little boys get in line to enjoy this ritual. Colton used to call them fibes, he'd say can I go fibe the playders?
Tonight, for the first time ever a new tradition was hatched.  The BIG boys lined up and fived the LITTLE boys as they were going on the ice.  It was the cutest thing ever!  To see these 4, 5 and 6 year old boys and girls, some of whom can barely skate, make their way down this tunnel of big players and come shooting out the other end onto the ice was just hilarious and really sweet.  Next year will be our last year to enjoy this little ritual and I will definitely miss it.  You should know that all of those pictures came from my little point and shoot as Rick is still ripping down his big files from his camera.  I'll post his really clear shots if he gets some good ones, later!
Posted by Vicky at 8:00 AM