Do any of you remember some of the early chapter books you first read when you were in grade school? Do you remember Judy Blume? I would read, re-read and read her books yet again because books were like the older siblings I never had. The education that could be had by reading one of her books! And I don't mean learning how to read. She had an edge, even when "edge" wasn't so clearly defined. She was comically vulgar, and yet poignant and spot on with her writing, from what I recall. Her characters could say and do things that would have ensured me being grounded for weeks. There was always something going on between a boy and a girl behind the A&P, and in my naive but imaginative mind, I was convinced that A&P was code for something forbidden and alluring. Imagine my chagrin at finding out A&P was the name of a store... a chain of grocery stores, to be exact. She should have just called it the Piggly-Wiggly if she wanted me to figure it out.

For Nolan, reading has not really been his chosen activity. Now he has been read to from since the day we first learned about his existence. But he hasn't been really fond of reading on his own. Until he discovered what must be the Judy Blume of his elementary school years, Jeff Kinney. Nolan, who is 8, has been swept away by the "Diary of a Wimpy Boy" series of books. He saved his money and took it all to the book fair and bought all 4 books this week. While I attended my first book club meeting this evening, he sat working on his first book called "Do-It-Yourself Book." Its like a diary of sorts with fill in the blank pages with writing prompts. 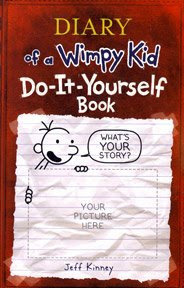 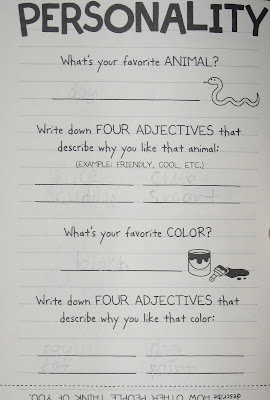 And then I happen to view the next random page.  Its about inventions and asks you to write down your ideas so no one else can claim them. 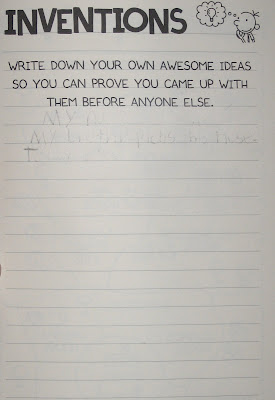 Now, to be fair, I can tell he did TRY to erase his answer.  But I can still see the vague remnants just enough to make out what he wrote.  It says...
"My name is Nolan.  My brother picks his nose, today I saw it.  The end."
I could only think, how very Judy Blume of him...   and clearly he is not my child.