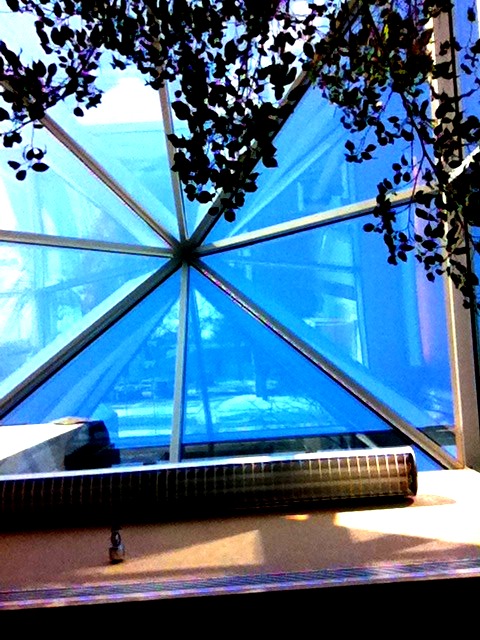 I started my week off bathing in light in the waiting room at Roger Maris.  My camera is sitting on my lap and I am shooting straight up.
I met with my radiation doctor on Monday, Dr. Ethan Foster.  He had read my file and was familiar with my history.  Then he asked to examine me.  Before I could warn him about my lymph node under my arm he pushed just a little too hard and I flinched.  He jumped back and I felt so bad.  But the reason he had to push around to find it?  Is because its already shrunk.  It may be that the swelling has just gone down, but it could be that the node itself is shrinking.  Either way, we decided to hold off on radiating the nodes under my arm for now.  Love finding the silver lining so quickly!  Halaven seems to be having an effect on my nodes!
Next we moved onto the issue of the spot in my back.  At times its fine.  Other times it flares and gives me fits.  Since there is a lengthy history with it,  and its precariously close to my spinal cord, we decided now is the perfect time to zap it.  The biggest side effect I may have is difficulty in swallowing for a few weeks, due to the esophagus being so close to the spine.  He felt a two week course of treatment should be enough, but he'd adjust accordingly if needed.
Then we got down to the biggest concern.  I have to admit, I've been pretty blasé about the whole brain blob thing.  When I don't have any symptoms, I simply don't focus on it very much.  But the reality of it set in as we started talking side effects of treatment.
I have two choices.  A one time targeted dose to the spot in my brain.  Or whole brain radiation.  With a targeted dose, the hope is to direct the radiation only to the tumor, and preserve the healthy tissue surrounding it.  Fatigue would most likely be the biggest side effect.
Whole brain radiation on the other hand, targets the entire brain.  But the well known possible side effect is a decrease in overall mental functioning.  As Dr. Foster said "you could lose a few IQ points."  With my School Psychologist background and my intimate knowledge of IQ, well, "losing" and "IQ" are two words you never want to see sitting side by side in a sentence about yourself.
But....  the more nebulous/ominous question remains... are there more cancerous cells in my brain waiting to make their appearance?  Whole brain radiation would certainly zap those as well...
Such big decisions, and yet for some reason, I didn't wrestle with this as much as I thought I would.  In fact, he had me choose first and then told me his thoughts.
I chose a one time targeted dose.
He concurred.
Then he shared with me, for most people he recommends WBR.  But, if he were in my shoes, at my age?  He could see why I'd want to try the least invasive first,  he would too.
Whew.
Of course, I have to have another brain MRI first.  One that will take even more thinly sliced views of the brain.  If more spots appear, I will have no choice but to go for WBR.
I topped off my big day with wig shopping.  I still have my hair, but my wig comes in this week!  I am ready.
And this was just my Monday... sigh... I feel like I am passing through time in light years... 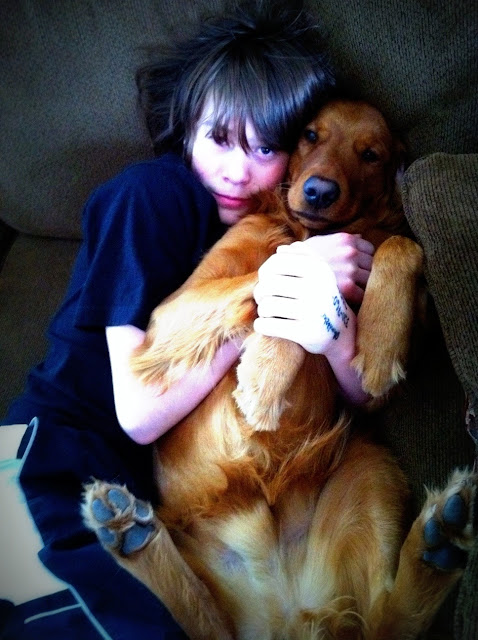 Our big snowstorm?  Is kind of a bust.  We did get a few inches of snow and its blowing around out there, but  oh well, we'll take the snow day and snuggle in.
One tiny prayer request?  I referred myself back to wound care.  I have a small "crater" that opened up along my incision. Sigh.  You prayed me through the last time and it totally worked.  But even this has a silver lining- I get to see Dr. Bouton again next week.
An abundance of light has shown up in my mail box and front step!  Thank you for continuing to beam light at me from all angles!
Posted by Vicky at 11:49 AM