People ask me all the time how the kids are doing and I answer they are doing well.  And they are.  But  after spending 3 months with them all day, I have a better sense that I am not the only one touched by cancer.  Its just more subtle with the boys, and they don't always have words to articulate how it makes them feel.

We laughed at Colton the other day.  His comment was, "well I don't get to do anything cause mom is sick in bed every day..."  We had to laugh, because its simply not true.  We teased him about all the things we've done and he had to admit that might have been an exaggeration.  But I do get that is how he perceives me.

Being 11 hasn't been easy on him.  We've tried unsuccessfully several times now to rescue a golden retriever.  The organization warned us that the young dogs go fast.  Every time we've inquired about just corresponding with a foster family, we've been told that dog is spoken for already.  Nolan gets his hopes up so high- theres been Jack, Susie, Gunner, and Booster as of late.  All spoken for.  We were a step closer with Jack than we've been with the other dogs- our family's file made it to the foster family to review.  But it was rejected because they felt Jack needed a fence.   Nolan sobbed.   He had already picked out the spot where Jack was going to sleep, next to his bed of course.  I know he just desperately wants that unconditional bond of love with a pet that he misses.

He has such a big heart.  His emotions can be so intense sometimes and anger flashes at times when he is covering up for how hurt he is.  Its later that he verbalizes how filled with remorse he is over his words, and how defeated he feels.

He's been camping out on our bedroom floor at night.  He waits till we are asleep and then sneaks quietly in with his pillow and blanket.   He has turned down going to 3 birthday parties this summer, and two sleep overs. He doesn't want to leave my side.  Its all I can do to convince him to go play at one or two friends houses on occasion.  But he either can't stay long or his friends can't play at all and I see how sad it makes him, but he'll tell me its okay, he just wants to be close to home and check on me anyways.   He is 11 sometimes, sometimes 30. 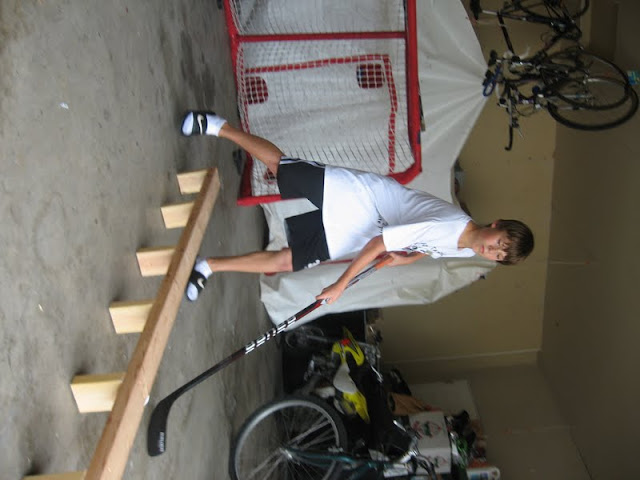 So we're bonding- this togetherness of him and I.  I see how very Tween he really is.  He and his Dad built this form for stick handling.  He is out in the garage every day with his stick and a ball weaving it in and out.  He is creating discipline.   He has also gotten strong enough to help Rick do some demo at my mom's old house.  He swung the hammer like a pro and stuck with it all day.  He has grown a ton this summer and is long and lean.  But I still find the little boy in him.  I'll find him making a team out of his stuffed animals and turning the basement into a baseball field.  The couch cushions double for bases and his stuffed animals get a work out around those bases.
He is excited for 5th grade.  Many of his friends are in his class this year and he has such a fun teacher again. And then I see that smile fill his face when he speaks of seeing his friends every day at school... and I am hopeful for him.  For us.  Cancer is leaving its mark on both of us- our hearts just continue to expand together.