Writing on the Wall. 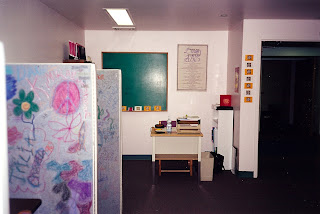 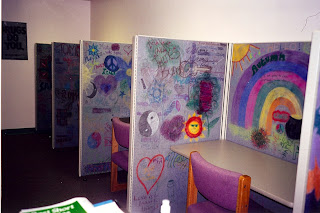 I've been looking back to look forward these days. I get a sense for that saying that goes if you want to know where you are going, just look back at where you have been, or something to that effect. We've been sorting, purging and rearranging throughout our house. One of the things that I put away for a rainy day was oodles of pictures that have been stashed all over the house. I went as far as labeling the time frame they came from, but that is it for organization. I put the thought in my head that someday I would have time to properly organize and sort them. It seems now is the time. The kids have had a glorious time looking back through the photos with me.

As the boys looked at the top two pictures I explained these were taken at the hospital I used to work at and that this was my classroom of sorts. I was hired as an Education Director for the Adolescent unit at Canyonview Psychiatric and Addiction Services. But an MS in Psychology enabled the staff to use me for a variety of positions. I did everything from nursing groups and symptoms management to nutrition groups to group therapy.

And while I had a skill set that I brought to the job, I lacked so much in experience. I probably looked as scared as I felt the first few days. Months later I learned the staff had all taken bets as to how long I would last! The man who I was replacing while being a wonderful person with lots of knowledge to impart had no idea how to manage the patients behaviors first. I followed him around for three days and came up with the only plan I could figure out based on what he showed me he did. I figured out I had to be nothing like him! While he was convinced it was a hopeless situation, I wanted the kids to feel hope. Where he saw lack of respect from the kids, I demanded it. He told me he kept waiting for the staff to come and tell him what to do. I decided I would just do and wait for the staff to tell me if I shouldn't do it.

One of the first few weeks I encountered a cleaning woman grumbling to herself as she scrubbed at a few patches on the wall. As I approached I could see she was trying to get curse words off of the wall. She told me it was a constant battle and that they had just recently repainted the whole wing because of the graffiti the kids put everywhere. An idea slowly brewed in my head.
In the morning goal setting group the kids would often sit and write or doodle. We had great art supplies and some of the kids were so talented. Since there was already so much profanity in the classroom on the partitions between the desks, I decided one day to let the kids try to cover up the words with some of their artwork using oil pastels. I told them it had to be a positive and appropriate message. I was not only blown away with how quickly the walls were transformed, but also by the inviting nature of the look. It quickly evolved into a privilege the patients could earn for being respectful, following my rules, and not writing on the walls of the hospital!

In looking back what I hadn't counted on was remembering so many of the stories behind each of the art doodles. The boy that made the sunshine had a bad "acid trip". He went from being an honor student to having to be reminded of his name, over and over again. He completely "fried" the wiring of his brain. But he has such a great spirit and had suddenly discovered he could draw. The rainbow was drawn by a girl who was the daughter of a celebrity. She worked up the courage to tell her father that she would have traded the riches for more time with him while growing up. She double whammied him when he told her she didn't need to keep seeing her doctor after she was discharged and she said SHE DID. That rainbow STILL brings a smile to my face. And the stories are so numerous and varied I could go on for days.

When I finished telling the boys what they could absorb, Nolan wanted to know why I quit working at the hospital. The very next picture pretty much tells the whole story. This was taken the night before I was induced with Nolan. I worked up until the day before my labor was induced and then I never went back. I told the boys I had new "stories" I was working on, and they were called Nolan and Colton. Colton smiled. And Nolan said, "no fair, at least your other kids got to WRITE ON THE WALLS!" Which pretty much gives you a glimpse of the story of Nolan. 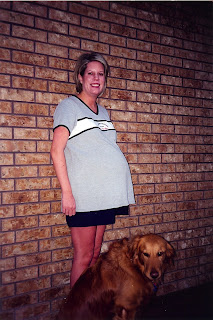