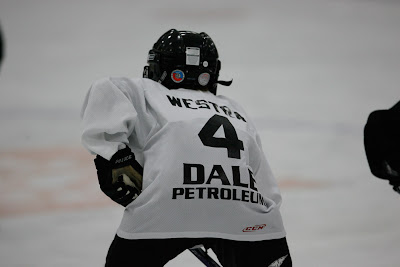 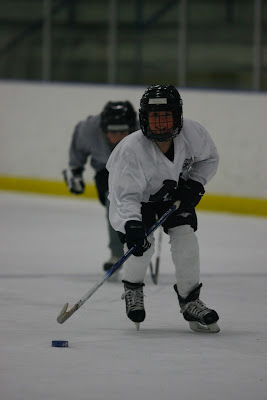 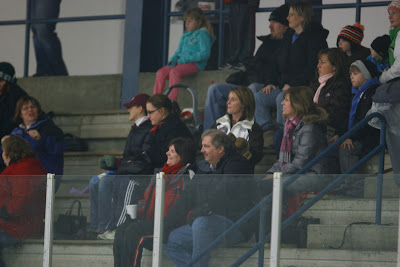 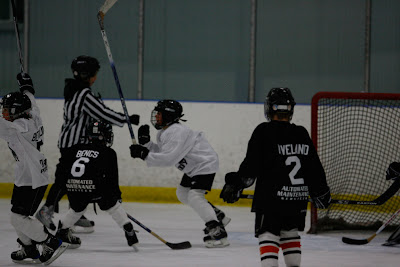 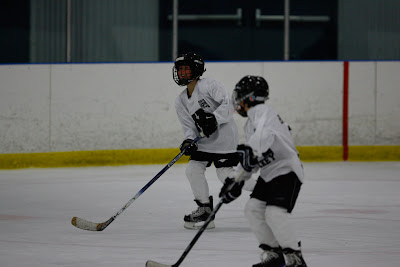 It was jamboree weekend for the boys hockey team this weekend. Rick took photos of a couple of games. He gave me all 500 images... each at full resolution. He smiles when he hands them to me knowing I'll have to go through, pick my favorites and then knock them all down in size to be able to post them.

Typically we don't keep score at our games yet. But they have started these jamborees to give the players a chance to experience what it will feel like to play in a game one day. Not only did they skate all the way up and down the ice, but the music was turned on (loud) and there were mini-refs on the ice learning the game from an official angle and calling off-sides on our rather confused kids.

In the coaching circles a lot of strategy comes into play. With the excitement and energy ramped up, the expectations rise too. The players learn that victories have a sweet taste to them and make you hunger for more. And for Nolan's team they learned that losing just plain feels bad. My heart hurt a bit when Nolan told me his thoughts at the end of the tournament. "Mom" he said. "I was just trying so hard. I kept telling myself to do more. But I didn't know what that was? Do you know what I can do?"
I was a little silenced by the weight of his questions for an 8 year old. We always say he isn't listening to us. Not only was he asking us thoughtful questions, he was telling us he was ready to listen to our responses.

I told him maybe taking last place and losing 3 out of 4 games was just meant to be, regardless of hard work. Sometimes luck plays a role too. And lots of things we can't control. But as long as he believed and worked hard, he would win at some point. Plus, maybe there was a really big win in his future. But that the only way to find out was to keep trying hard. We also had a good chat about how when he is older, it won't be the winning and losing he remembers nearly as much as the fun and the friendships. I was on a little bit of a soapbox when I realized my little hockey player had drifted off to sleep.
Posted by Vicky at 12:40 PM