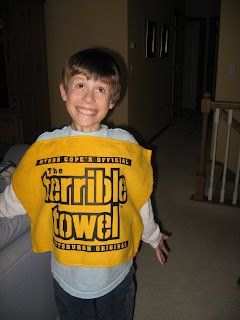 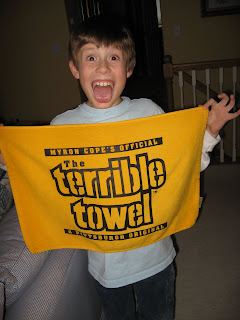 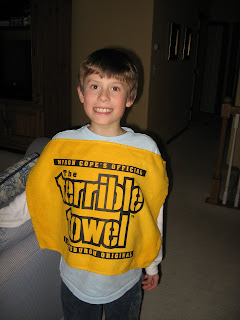 Guess what arrived in the mail today? A package for our all things Pittsburgh related boy sized fans! And inside? Two of Myron Cope's Terrible Towels. They're famous you know... but in case you didn't here is what Wiki has to say:

The Terrible Towel is a gimmick associated with the Pittsburgh Steelers, an American football team in the National Football League (NFL). Created in 1975 by then Steelers radio broadcaster Myron Cope, the Towel has since become "arguably the best-known fan symbol of any major pro sports team".[1] Since its invention, The Terrible Towel has spread in popularity; fans take their Towel to famous sites while on vacation. The Towel has been taken to the peak of Mount Everest and seen on Saturday Night Live. It is widely recognized as a symbol of the Steelers and the city of Pittsburgh.[2][3]
Proceeds from sales of the Towel have raised over US$2 million for a Pennsylvania school which cares for people with mental retardation and physical disabilities. The Terrible Towel is credited with being the first "rally towel" and its success has given rise to similar products promoting other teams.[4] Numerous versions have been produced; all are black and gold in color with the words "Myron Cope's Official The Terrible Towel" printed on the front.

Those towels have gotten a work out. Young boys don't really require much of an explanation of what they are supposed to be used for. So they've been waved and flapped and wrapped around and thrown on the dog and well, you get the picture.

There was a note inside too. Here is what is said:

We thought you could use these
during the Superbowl. If you don't
like Pittsburgh, maybe your mom
could use them in the kitchen
to wash and dry the dishes.


Thanks Uncle Lee and Aunt Kelly and Madi and Alex! The boys are super excited for the game. They went to the store with their dad just to buy stuff for chili on Sunday. And now they have everything they need.

And the reference to the washing and drying dishes? Flashback a few years with me. Chief dishwasher here. Chief dish dryer, Uncle Lee. And that sink sprayer? In our house it meant only one thing! Prepare yourself for battle, fastest draw wins! 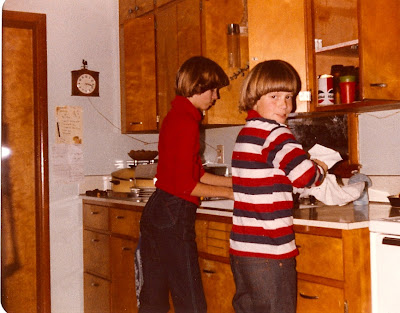