I just don't have a creative life force flowing through me at the moment. I've started and deleted more stuff than I care to think about. The winter "blahs" have taken their grip on so many people I know. This doesn't mean that I am sad or upset or even frustrated... just a little on the less than enthusiastic side. I'm not alone.

My neighbor called me over for tea the other day. I laughed when I arrived and she said she had no tea, or really anything to go with tea, but she DID want company. She was tired of the still white walls in the lower level of her house, that reminded her of the still white sea of white that we live in. I laughed when she mentioned wanting to paint the walls blue and yellow. We are kindred spirits in our quest for all things outdoors and sunny and boy-proof. She didn't blink the day she invited us over to enjoy the new inflatable pool she bought that first summer we moved in... and the boys delighted in... filling it with rocks and sand. I knew we would be fast friends.

And while she and I laughed over stories of summer, our boys were busy outside. Winter has nothing on them. It was a high of -7, and there they were, building another snow fort. With rosy cheeks and teamwork and their little wagon that has become their little engine that could. Even Colton, who took a hockey stick to the face in the shooting room at hockey, and has a big nasty looking scrape on his face, insisted on being outside. They stop for hot chocolate every now and then, and to wave at all the people driving by admiring the massive beauty of their snow fort. Secretly, I wonder sometimes if the people driving by aren't more amused with the kids willing to play outside when its -7. In the five minutes I stood out there taking pictures, my fingers were numbing quickly and aching with cold and I didn't hesitate running my wimpy little behind back inside. I was momentarily sustained with imaginary tea and sweets with a kindred spirit and our now blue and yellow colored winter blahs. 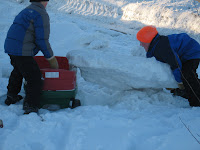 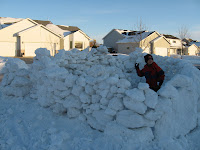 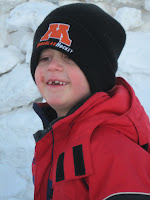