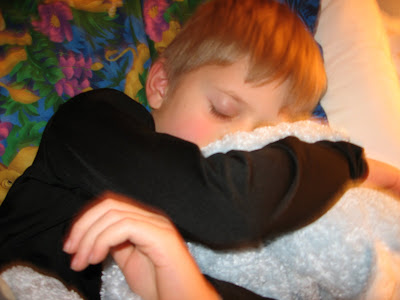 Colton came home from school on Tuesday irritable and whiney. Not his typical demeanor at all. He decided to go and play in his room and when I couldn't hear him I went to check on him. He had crawled up on his bed and fallen asleep. Two hours later he was still sleeping. Finally he got up. His face was flushed and he said he was hot. I took his temp and it was 103. I gave him some Motrin. During the night he woke up and came running to our room crying. "I'm all sweaty everywhere!" Hurray, I thought. The fever broke. We decided he should stay home from school in the morning. Wednesday he seemed better. By late afternoon Wednesday, his fever was back. Wednesday became a repeat of Tuesday. Thursday repeated Wednesday. And Friday the fever that came was 104. Today we took him to the doctor. He had a normal temperature. She checks him over and says she can't find an obvious reason for the fever. It must be a virus. And since he didn't wake with a fever, he may be turning the corner.

After a normal rest of our day I happened to pass Colton in the hall. Cheeks flushed, glassy eyes. 102. Hmmmm. Any mommy warriors care to jump in on this one? I waver between thinking its just a fever, to its a fever that has come back 5 days in a row now... Of course Colton's take on the whole thing left us doubled over in laughter, He calmly stated "Hmm, I guess I'm NOT going to die. Thats good!"
Posted by Vicky at 6:39 PM