You're gonna miss this too.

I've noticed this Trace Adkins song (You're Gonna Miss This) on many blogs lately and I can see why. The boys are preparing for the start of their hockey season today. I have to admit I both dread and look forward to hockey for various reasons. One of the parts I struggle with is the challenge of getting the boys dressed in their gear. Now, I've been around the block a time or two, so I can dress them in my sleep if need be. But it helps so much if they just cooperate the tiniest bit. And each year I have to say we make strides in their independence. So today we calmly stated we should go to open hockey today because clinics start next week. The boys seemed okay with this idea. So we got their gear and told them we needed to leave at 12:30 so we should begin dressing at 12:00. I also mentally noted that I needed to make sure they were properly fed and hydrated well in advance of this time. And then the strangest thing happened. Nolan began laying out his gear. Then he began putting it on. All of it. He tied his skates, he tied his breezers, he snapped on his helmet. And went and found his stick. By himself. And I was silent the ENTIRE time. But I made sure he knew how proud I was of him and we made a special point to call dad and tell him. Not wanting to be left out, Colton attempted the same as well. He truly does need just a bit more help, but he has made progress too and we are equally as proud. As they were about to leave Nolan gave me a quick hug. I about fell over. Literally, with his skates on we are almost on equal footing. It scared me and Rick as well. We went for the tape measure. On his skates Nolan was 58 inches tall, and Colton was 51. I'm left wondering where my little boys went. Yup, we are really gonna miss this. 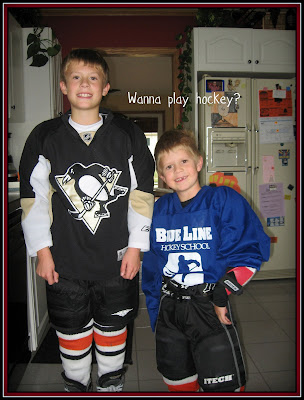