This last week our travel hockey team has been preparing to host our first home Squirt tournament. It was definitely a week of firsts. It was also a weekend of stepping out of our comfort zones... in a big way. I faced more challenges, obstacles, decisions as well as emotional ups and downs, than I have faced in a long time. The really rewarding part, however, is that I didn't do it alone.

There were two "teams" involved in the success of our tournament... the players on the hockey team, and the parents of the players running the tournament. We've quickly discovered there are no manuals, for running a tournament. There aren't lists, or flowcharts or how-tos and how-don'ts anywhere. You have to go outside of yourself and figure out the best way to navigate the rocky waters.

So behind the scenes the planning begins... as well as the worry and stress. Long before it becomes visible to everyone else, the "coordinating" of the event begins. I feel so very fortunate to be sharing the coordinating position with my friend Kim. Because quite honestly, she has been the driving force to making sure it has all gotten done. But no decision has been made without the two of us having hashed over every detail. We have shared hundreds of emails, dozens of calls and many face to face conversations in coordinating our efforts to help plan this weekend's tournament.

When you look at the pages of notes I have, its overwhelming considering so many of the tasks are so foreign to us. Check credentials, passports, birth certificates? Determine brackets? Run a chuck-a-puck contest? What? Who me?

But thats what we did. One challenge at a time we figured it out. We relied on the help of our parents who all stepped up and played a role in the success of the tournament.

Perhaps we only needed to look to our kids to figure out the formula for success. They easily won their first game. Lost a heart wrenching second game at the buzzer, and came back to win a close game in OT, for third place.  How fitting that Kim's own son scored the game winning goal!!

I'm weary... tired doesn't begin to describe how I feel... mentally incapacitated or tecnically I have mushy brain syndrome.

But as we were leaving for our inhouse game last night as a night cap to our weekend of hockey, I started a mini pep talk with Nolan realizing how tired he was and that he wouldn't want to go play another game. I told him that we were down to our last month of hockey starting today. He screeched at me "What? No way... we barely just started and now our team is getting good and its going to be done? I don't want it to end! I am not tired of hockey!"

As usual, my nine year old managed to give me proper perspective.  Anytime any of us have asked him to step up and deliver, he has.  When we needed him to play defense, even though he dislikes it, he does.  When we've needed goals, he has found a way to score.  When we need him to skate down the ice, and back, and then down again, he will.  He doesn't tell us my legs are burning, and my lungs are on fire, even though we know they are... he just does it.  We forget sometimes, we ask a lot from him... from ALL of them.

We asked them to step up in a big way, why shouldn't they expect the same from us?


Our warm up to the big tournament was Colton's 8 am game playing goalie for the first time!  He would hate me for saying this... but does he not look totally cute in all that big goalie gear? His coaches also said he made a lot of saves and did a good job.

Nolan was beside himself, not only getting a medal, but having it placed around his neck by some of his favorite Moorhead Spuds hockey players that he has long admired. They give him their broken sticks and he cuts them to his size and uses them in his games. He so wants to be them some day.

Congratulations to the Squirt Orange team in their third place finish of their first home tournament! 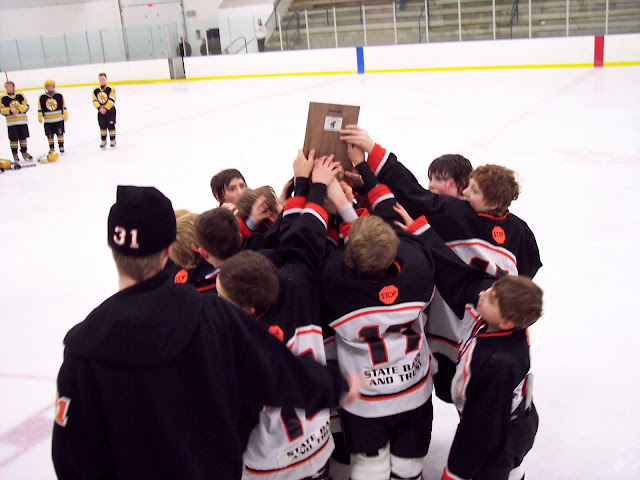