The elephant in the room?  Well actually its not... in the room.The elephant is outside my house.  But it is there nonetheless.  Every time I go to write the date of an event for March on my calendar, the elephant intrudes on my thoughts.  Should I even bother to write down the dates?  Will we be able to go?  Or will much of March as we have planned, unravel before our eyes, just like last year.

If you are from the area you know.  Or if you followed my blog last March you know... the name of the elephant is "Flood."  And Flood is reportedly once again making his presence known.  All you have to do is look around outside.  The mountainous snowdrifts that you can't see around when backing out of the driveway, or when creeping out into the intersection, are some of the tallest I've seen since childhood. 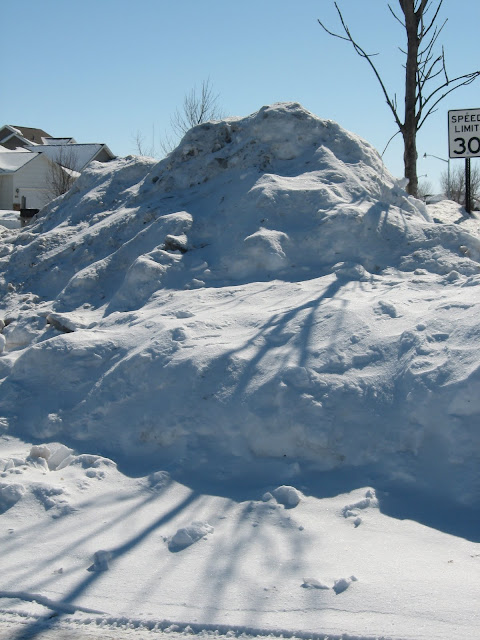 In March, the temperatures start to warm up.  As the temps rise, snow melts and starts to run off.  But the ground is still frozen.  So instead of seeping down into the ground, the water pools and collects, and puddles and streams anywhere it can find to spread out.  Much of it, empties into The Red River which divides our two communities, Moorhead and Fargo.

Last year, the river crested at a history making record of 40.8 feet above flood stage.  I blogged about it here, and here, and here, and most of the month of March.  We sandbagged and constructed a huge super dike along the coulee a block away from our house extending down through our backyards for miles.  The river overflows it's banks and then backs up into the coulee, threatening our homes. Even if the water does not flood our homes directly, the water overwhelms our lift stations, which can cause sewers to back up into our homes. Or if a power outage occurs, our sump pumps can shut off again leaving water to "seep" through the basement into our homes.

So for nearly two weeks last March we filled sandbags around the clock.  School let out, colleges emptied their classes and volunteers arrived from surrounding communities to pitch in.  The national guard set up post outside my house and the neighbor across the street and I kept a constant supply of cookies and beverages and hot foods going out to them.  But then the Red Cross showed up and took over feeding everyone so we could go fill sandbags and work on the dikes.

The saga seemed never ending.  Adding insult to injury, a blizzard descended upon us shutting down operations for a bit.  Our hospitals and nursing homes were evacuated.  The national news crews circled our block as well as our town.  We were both exhausted mentally and physically, but buoyed by the outpouring of help and support coming from everywhere.

We were shocked the day the code red went out telling us to evacuate.  I still maintain, that largely because of the images of Hurricane Katrina victims staying in their houses, we all listened and left our homes when asked.  The national guard remained.  They walked the dikes and watched for holes or weakening walls.  The force of the water rams and batters the bags of sand.  The tiniest of holes can lead to a major breach which could be disastrous.

In the end, many homes were lost to the flood.  However, many MORE homes were saved.  Almost instantly our community leaders began looking to formulate plans for permanent flood protection.  At the cost of billions of dollars however, no perfect plan has been devised.  Too many of the plans call for a diversion of the river, which would in turn wipe out many communities further to the north of us.  Plus, its clear the solution won't come quickly enough for this year.

So we wait.  For the temperatures to rise.  For the sun to come out. For the water to run.

For the elephant named flood to be heaved off our collective chests, so that we may breathe freely again.
Posted by Vicky at 1:09 PM