The present you don't expect.

Its the unanticipated gifts that sometimes are the best.  Not because they are big or expensive, they're just so UNEXPECTED.  Intangible really.  You can't articulate them or dream them up.  Just one day they show up, and gleefully you accept them.
It was crazyville at our house after school. Colton had Ethan over.  Nolan had Isaac over and then Caleb came to join in.  While it was LOUD, and CHAOTIC, it was still mostly laughter and shouts by boys... well ... being boys.  They played wildly for almost two hours and then abruptly, I heard Nolan start getting worked up.  The boys were running and getting too close to his backpack.  He was adamant the boys not get too close.  When Dakota came careening around the corner and her paws skidded on the slippery floor within inches of his backpack, his last bit of composure escaped him.  His precise words, "everyone needs to leave NOW!"  He grabbed his backpack and headed for the other room. The other boys left as we sat down to eat dinner.  Nolan came from the other room.  "There are two important presents under the tree." he said.  "Don't anybody touch them.  They're fragile and I made them for you dad and one for you mom." "And", his voice getting stern now, "no PEEKING."  "Cuz I worked hard on those."
Rick, not missing a beat, piped up.  "Please, can't I just take a little look, just for a second?"  "NO, dad." "Aw c'mon, just one shake, please?"  Nolan getting a little put out now.  "DAD, they could break!"  "You'll have to wait for Christmas."  They continued going back and forth.  Finally Rick threw out the final threat "If I can't have it now I'M CANCELLING CHRISTMAS!"  By now both boys are grinning.  Colton calmly says, "thats okay, Christmas isn't about presents."  "Colton? What IS it about then?" I asked.   "Baby Jesus' Birthday!"  he proudly proclaimed.  "DUH."  And Nolan chimed in, "Besides mom.  Its about GIVING. Not what you and dad get."  Insert eyeroll here.  Picture parents leaping for joy here!  We so often wonder if we're heard. Or when we've said something for the 1000th time, is 1001 really going to be any different? And yet we repeat the same words and lessons constantly. And it appears that, maybe, just maybe, it happens one day. Maybe its the 768th time we've said something and it sinks in.  Maybe its the first time and they just love to see us squirm.  But what we as parents know, its a gift nonetheless.
Apparently Dakota was the only one unphased by all the hoopla.  After Nolan scolded her she sought refuge.  Could you blame her? 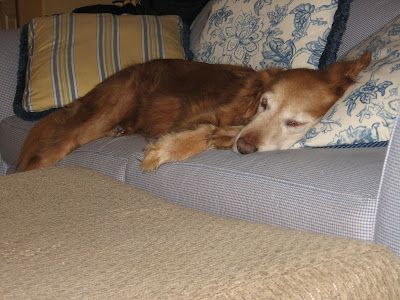