Jordy at the Ralph 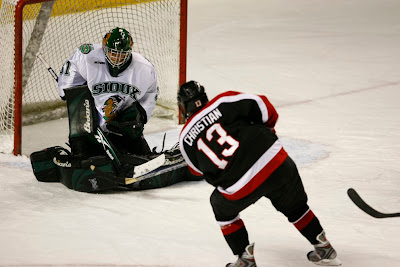 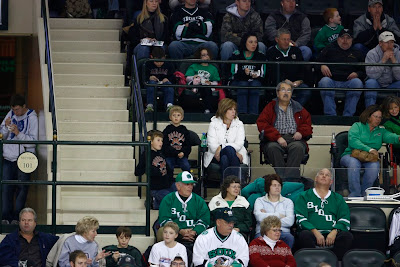 That is me in the white coat trying to keep up with the action and keep track of the boys in the black sweatshirts at the same time. 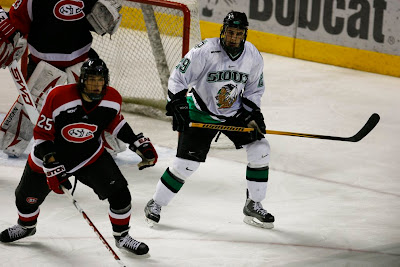 Chris Vande Velde, in the white and green, getting positioned for the puck coming his way.


When Rick called from the rink Thursday night he had an offer I just couldn't refuse.  Jordy's mom was at the rink and said they had extra tickets for The Huskies vs. The Sioux on Friday night, would we like to have them?  And maybe Rick could bring his camera and shoot some photos?  He would indeed.  We knew it would make for a long day.  We had the funeral in the morning and Rick had an appointment scheduled with a school in the afternoon.  The school was right on the way up to Grand Forks.  Plus, we didn't have early morning skating the next day.  So we went for it.  If we've been reminded of anything from our past week's  funerals, its too live life now!
I know I've blogged about Jordy before.   (Click here)  The Jordy worship by our boys just doesn't end.  The boys would go to see him skate just about anywhere.  But the Ralph?  Versus the Sioux?  C'mon.  It doesn't get much better than this if you're a hockey fan.  The Ralph Engelstad Arena is named after the man that donated the 100 million dollars to the University of North Dakota for the constuction of the arena.  You can see some more photos of this amazing facility here (Yes, those are real marble floors!)  Tickets are not easy to come by.  We felt so honored and lucky for this experience.
Rick was granted a press pass and it enabled us access to places other than just our ticketed seats.  The photographers tend to sit in the handicapped section (if it isn't full), as they don't block the view of someone watching from behind and they get an unobstructed view in front of them.  The boys were thrilled as it enabled them to stand behind the Huskie's bench and be near Jordy.
We were a little conflicted over which team to cheer for I'll admit.  Typically we'd cheer for the Sioux.  In honor of Jordy and the two other teammates that hail from Moorhead, John Ammerman and Brett Barta,  we cheered for the Huskies this night.  But we couldn't ignore the fact that the Sioux also have one of our Moorhead alumni who used to skate alongside Jordy, Chris VandeVelde.  It was fun to see Jordy  "go in the corner" with Vande.  Jordy is 5'10 or so and Vande is easily 6'2 or 6'3.
The Huskies ended up losing 3-2 but it was a close game.  After the game Jordy's dad showed us where to wait for the players to come up from the locker room.  But Rick's press pass enabled all of the men and boys to go down to the locker room.  Nolan and Colton got to meet the head coach of the Huskies, Bob Motzko,  who generously came over and shook hands with both boys.  And they got to walk up with Jordy who had a horde of peolpe waiting for him.
He said goodbye to us and offered this gift.  "I'll be in Moorhead next week.   I'll come watch you play, tell me which color team you are on."  He already remembered that Nolan is a second year Mite and a Colton is a second year Rookie.  And that is not an empty comment form him.  He will be there.  He will go out of his way to ensure that all the young kids who idolize him get his attention.  That is why he remains so special to us.  He still embodies the young man you want your little boys to grow up and be someday.
It was a late night.  We got home well after midnight with two very sleepy boys and two exhausted parents.  And we would do it all over again in a heartbeat.  It was so worth it.
One day soon I will do another post about the Christian family hockey legacy.  It goes way back and includes several Olympic medals including a gold medal won by Jordy's uncle Dave affectionately referred to as the 1980's Miracle on Ice.
Posted by Vicky at 10:41 AM