Doesn't almost every little boy who plays sports grow up dreaming he will play for a professional sports team? Nolan doesn't just dream about it, he does everything within his power to be around professional sports, namely hockey, as much as possible.

But he is limited to what mom and and dad can provide. Typically Wild tickets for the 4 of us is just out of the question.  Unless, a generous and compassionate wife of a professional player steps in.

Last summer, the day Matt Cullen, #7 for the Minnesota Wild, came to the rink to sign autographs for our young hockey players, its was his wife Bridget we spent so much time talking to. While Nolan is certainly a Wild fan, and a Matt Cullen fan, its no secret he is a huge Penguins fan and loves Sidney Crosby.

And Bridget's eyes grew big when she heard that. Since Matt and Bridget are friends with the coach of the Penguins, Dan Bylsma, maybe Nolan would enjoy coming to the game when the Penguins come to play the Wild?

True to her word, Bridget set aside two tickets to the Penguins game for Nolan and Rick last Tuesday. While I went to chemo, Nolan got out of school for a half day and drove to the cities with Rick.  (Colton had no interest in going this time which turned out well when he came home with a fever that day.)

Nolan was only momentarily disappointed that both Sidney Crosby and Evgeni Malkin had not made the trip.  Because waiting for him and Rick were family passes, allowing them to congregate with the families of the players outside the locker rooms after the game.

Rick had already submitted  a list of games to the Wild for him to shoot photos at, but he was turned down for some of them, including the Penguins game.  My point and shoot camera would have to do for their photos. 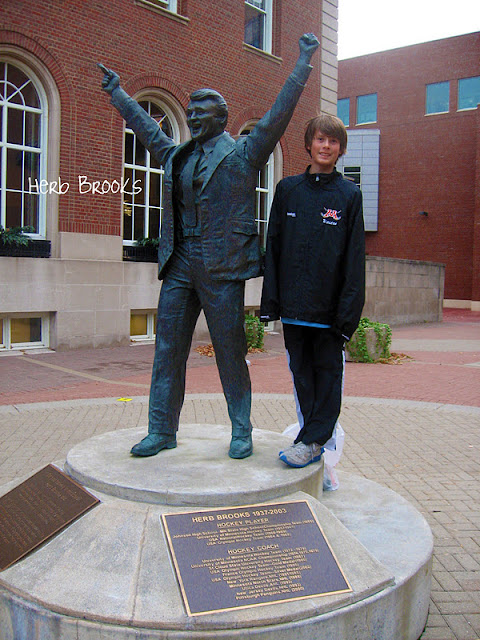 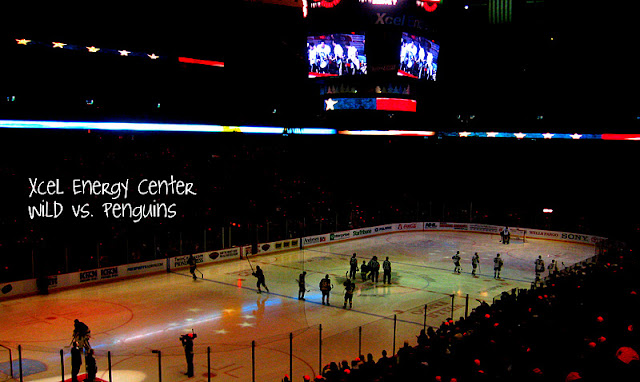 Matt Cullen taking the face off below for the Wild. 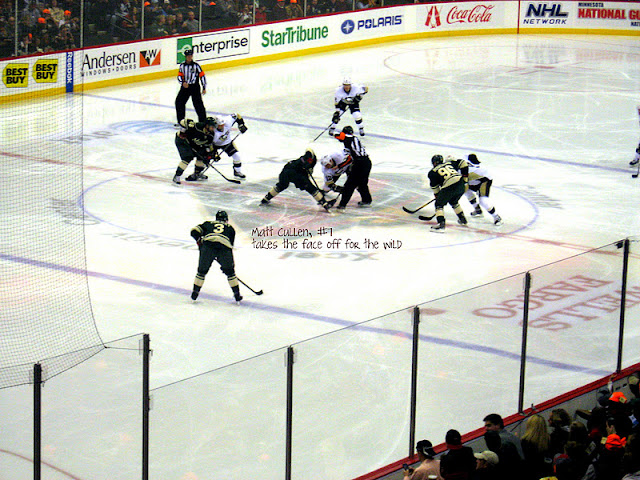 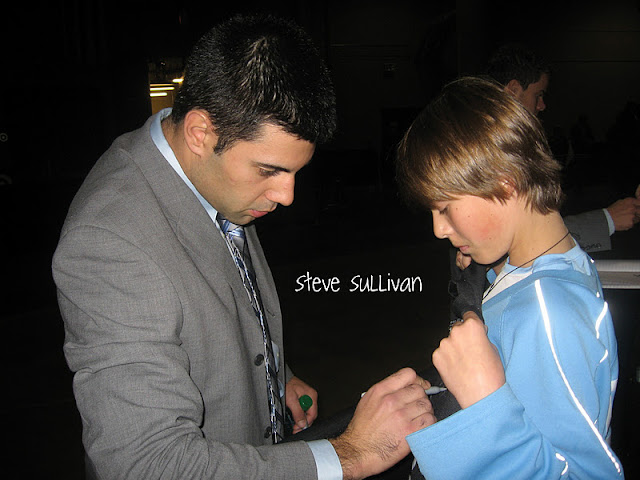 Co-owner of the Penguins and legendary player... Mario Lemieux 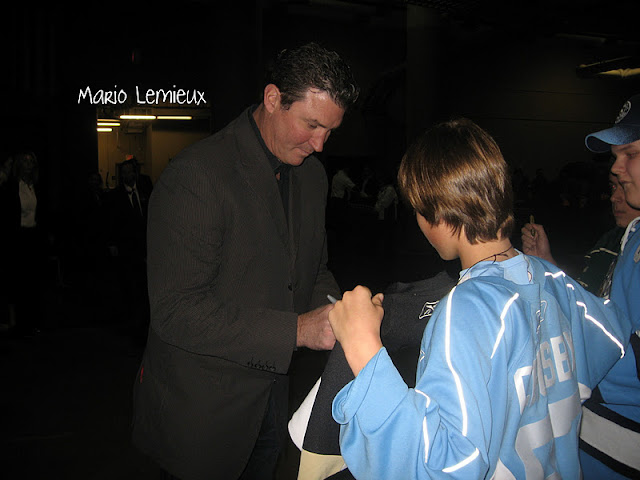 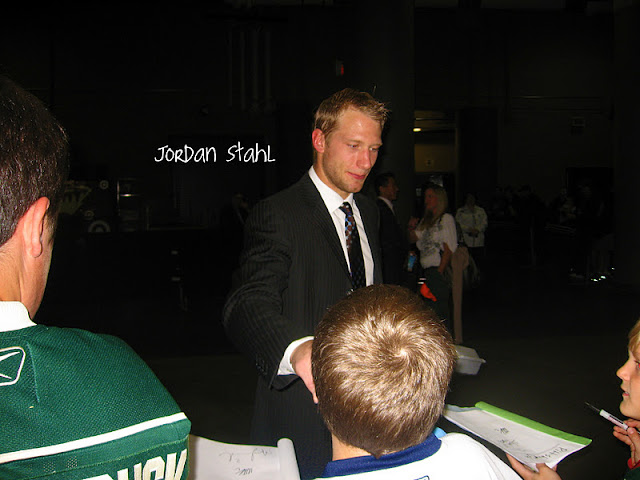 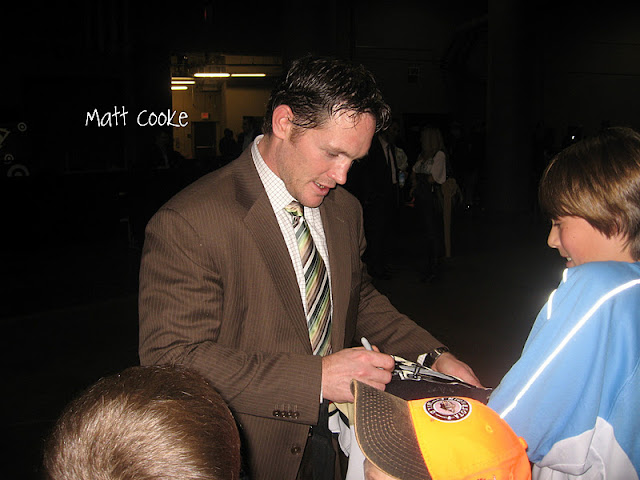 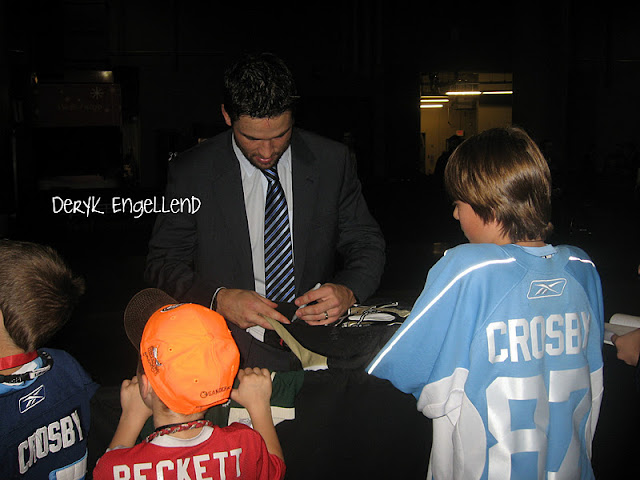 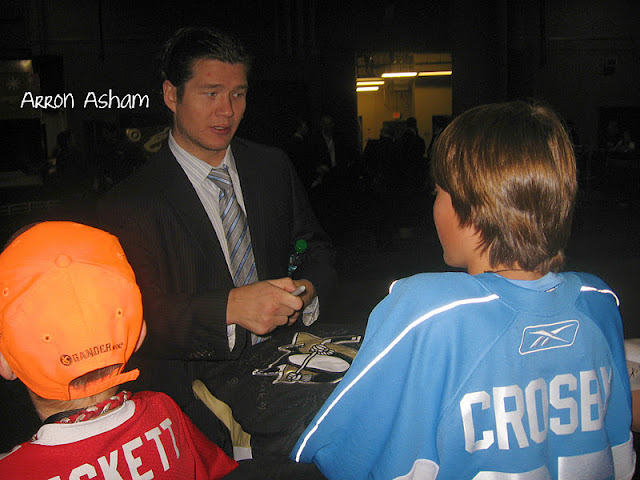 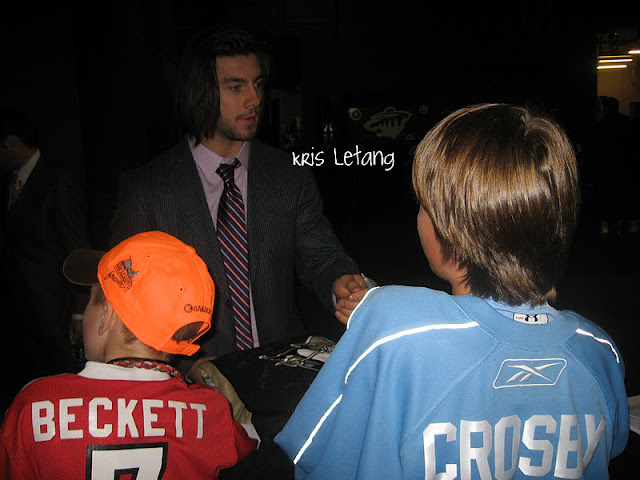 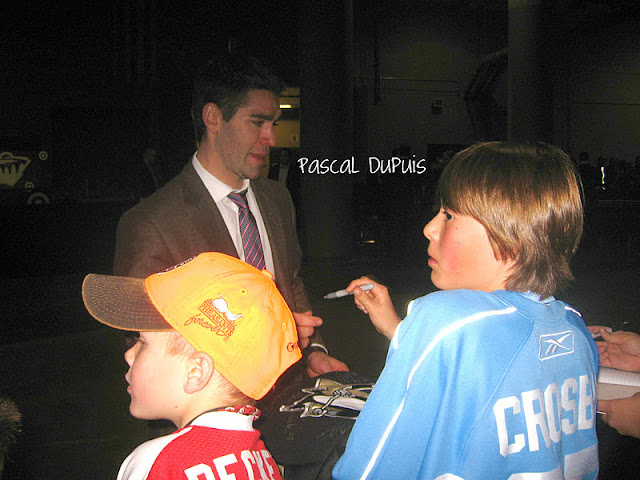 Nolan has been a long time member of the Pittsburgh kids club and he has hung onto every player photo they send to him.  He was thrilled when Fleury agreed to sign both the jersey and the picture Nolan had brought!  Plus, he got Nolan's name perfectly. Its always the little things that they remember. 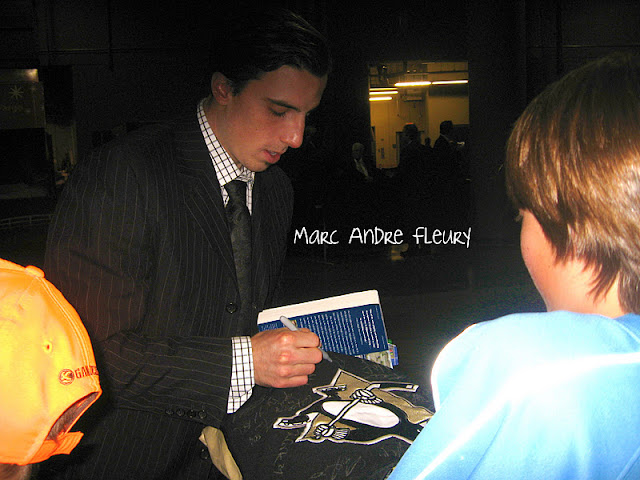 And now the Wild players.  They just had no puck luck that night and lost the game even though they played well throughout the night.  Nolan got several more Wild players, but Rick has abandoned my out matched camera by then. 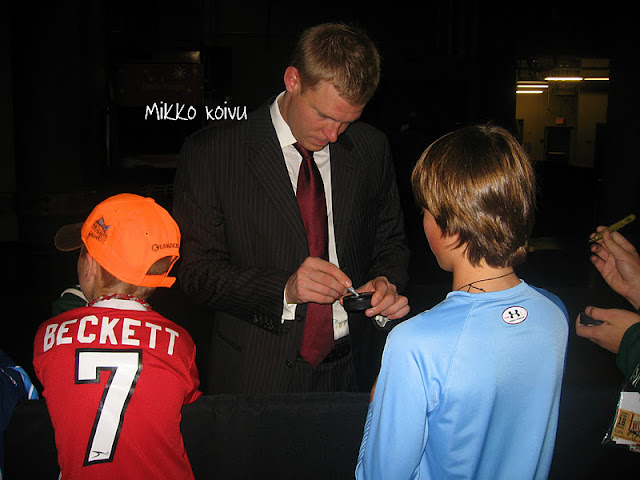 This is one exhausted, beaming kid. 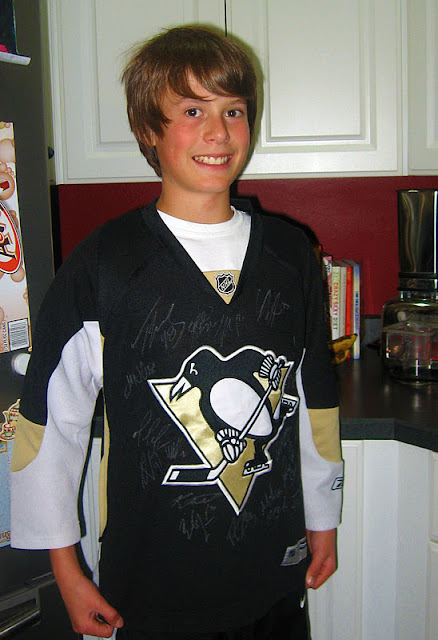 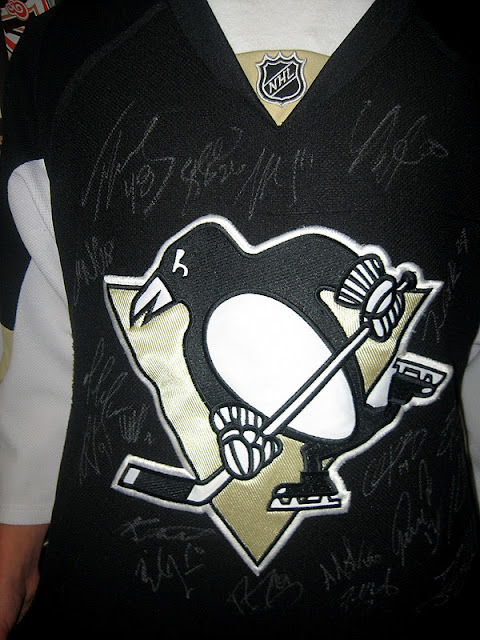 Nolan's hockey dreams are alive and thriving.  Who knows if he will ever have the "stuff" it takes to make it, but what I love, is that he at least believes in the dream and works pretty hard at hockey because of it.
We are forever indebted to Bridget Cullen for setting this whole thing up for Nolan and Rick.  Matt and Bridget are cofounders of the Cullen's Children's Foundation, or Cully's Kids which provides financial resources to organizations that support children's healthcare needs with an emphasis on cancer.  They both understand the stress and toll that cancer takes on a family and work tirelessly to raise funds and support for kids with cancer.  We're honored to volunteer at the events every summer and come away with rewards beyond measure in being around "Cully's Kids."
From my own perspective I know it was more than just going to the game and meeting the players, for my two guys.  Truly what Bridget enabled my boys to do, was forget about cancer for a day, and just be hockey loving fans, and that is the best gift of all.