Spontaneously,we rode along with Rick to Minneapolis Friday night. We had no big plans, and a limited amount of time. We were picking up yearbooks for delivery Saturday night. The forecast called for rain on top of more rain, so hitting the road sounded like the best plan.

I've admired the landscape in winter, but I come to life when I see the lush greens of the spring. Everywhere I looked I saw, rolling hills shrouded in greens, with a contrast of black dirt for the newly tilled fields waiting for planting, and red barns sitting alongside a white farm house. Classic Americana. I breathed the fresh air deeply. 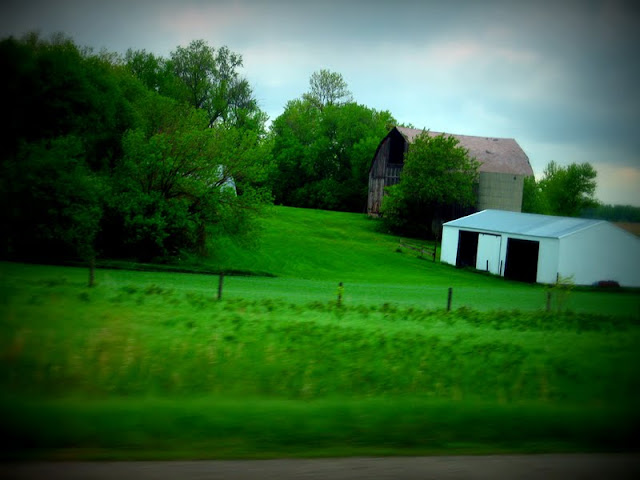 We awoke the next morning starving for breakfast.  I love google.  Google told us to go to Hell's Kitchen for one of the top breakfast places of downtown Minneapolis.  It was so close we could walk.  Nolan wasn't so sure when he passed under this to go down the stairs inside the restaurant. 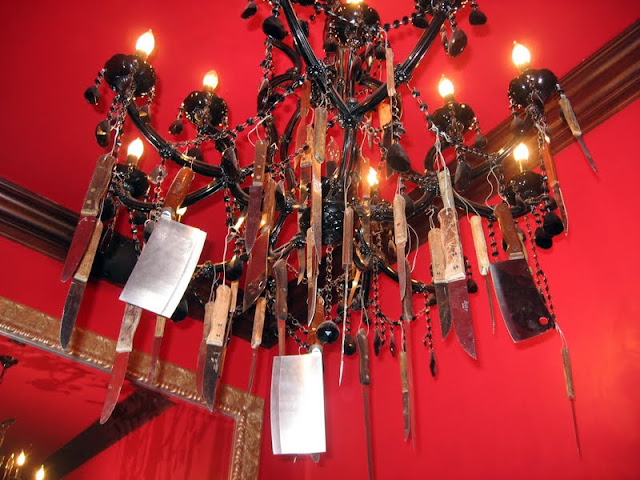 Obviously its an establishment for Adults and kids alike.  The smurfs were playing on the tv on the bar.  The kids were entranced.  "Hey mom, those are the "really old" toys you have."  Thanks kids, I never would have predicted that smurfs would one day date me as "ancient." 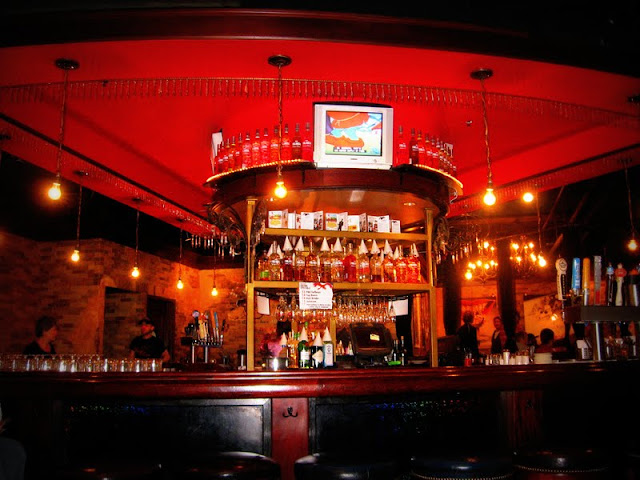 This little one wasn't feeling his best and had a gunky nose.  He hasn't missed a day of school for illness this year, and this is hopefully just a case of allergies. 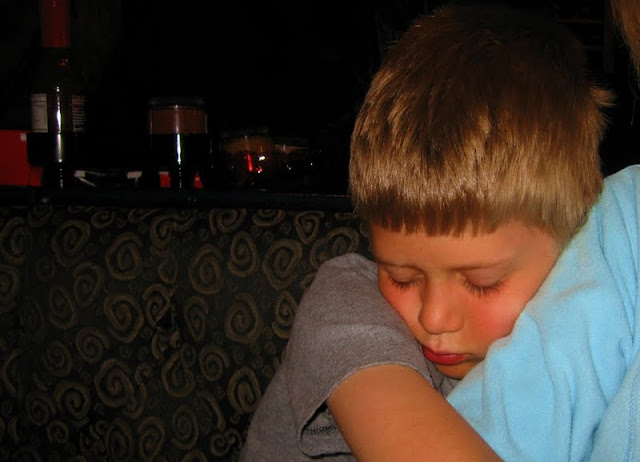 I have three words for you... lemon, ricotta, pancakes!  Wow, I didn't even need butter or syrup.  They were dense, but light.  Flavorful, but not too rich.  I ate the whole plate and crashed and burned on my vegan diet.  I'd stray again for those! 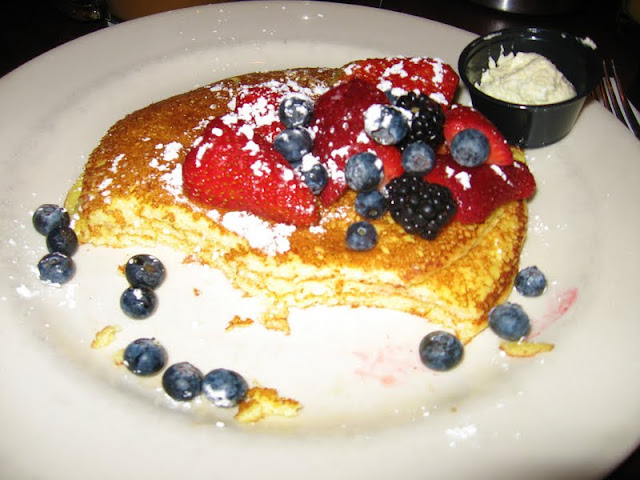 Because the Twins were playing that night, Nolan wanted to go to the souvenir shop and bring his birthday money. 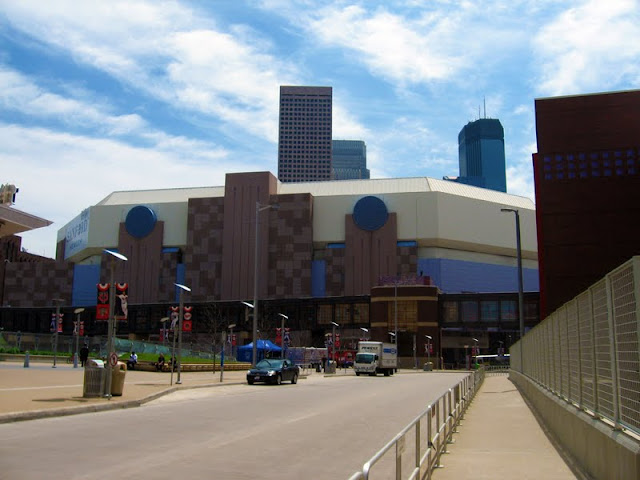 We had seen a couple of kids leave with newly autographed balls and the hunt was on for where the players were at. 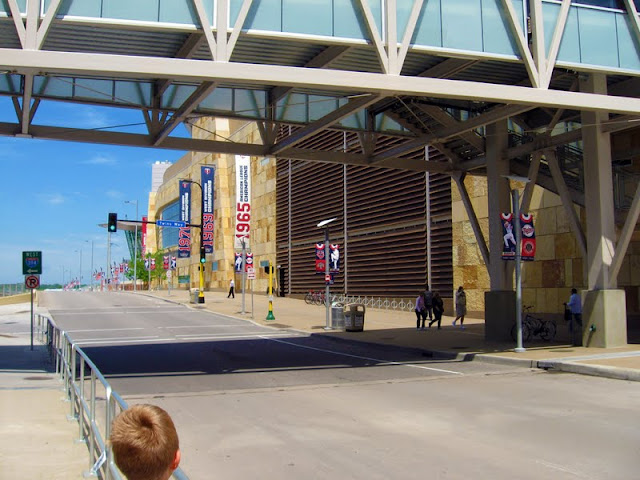 I still marvel at the architecture of Target Field even though I've been there once before.  The pro shop is below through the glass windows. 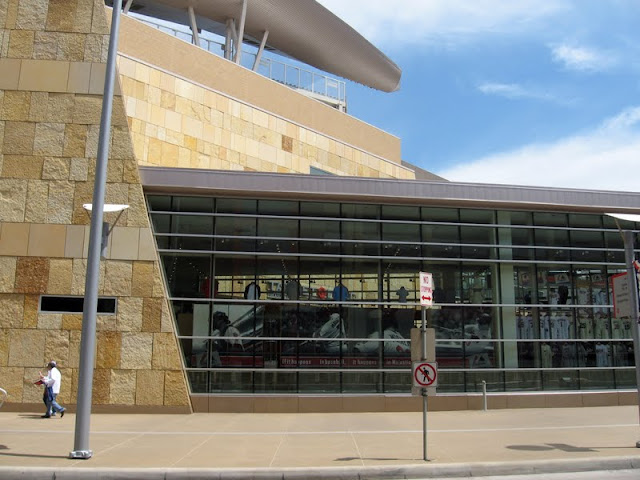 The boys heard they should bring something to have autographed and quickly bought baseballs and got in line. Autographs ended at 12:30, and it was 12:25.  I had a proud momma moment when the security officer told the boys the line ended with Nolan. But Nolan spoke up for his brother and said he was coming too and could he please be where the line ended?  How could they refuse? 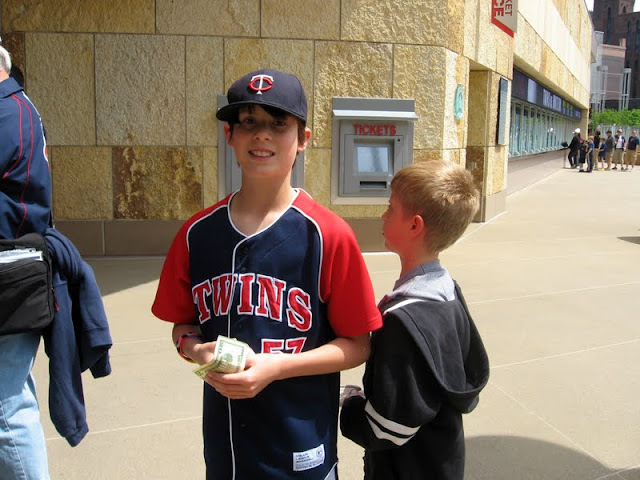 And this is what they were standing in line for.  Brian Duensing on the right and Matt Capps of the Twins. 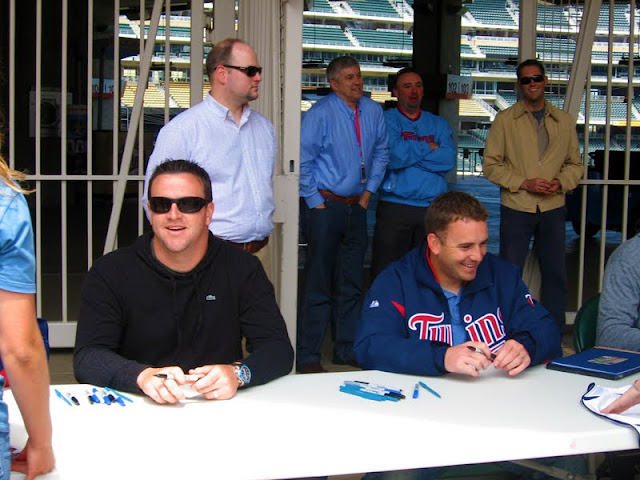 Along with Michael Cuddyer, 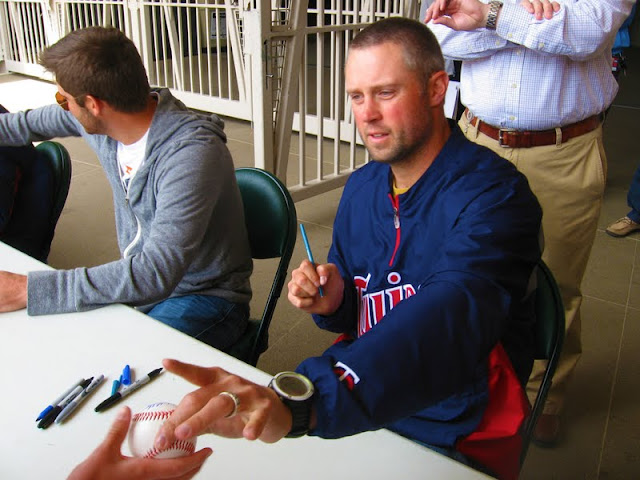 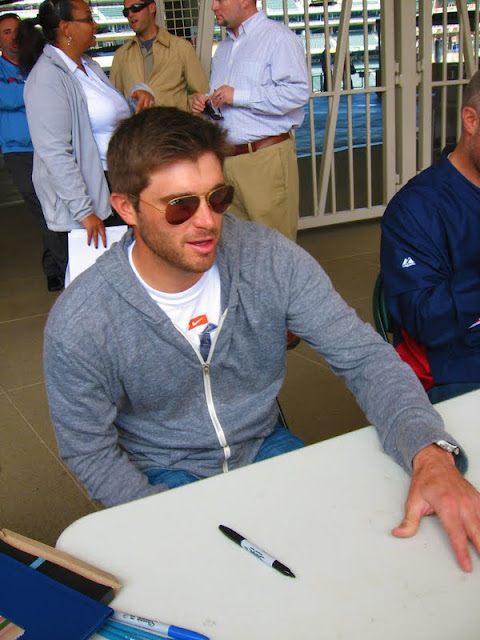 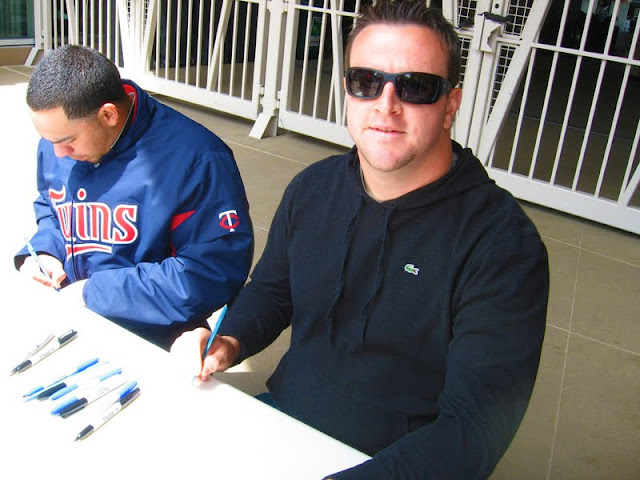 And finally a rookie, Rene Rivera. 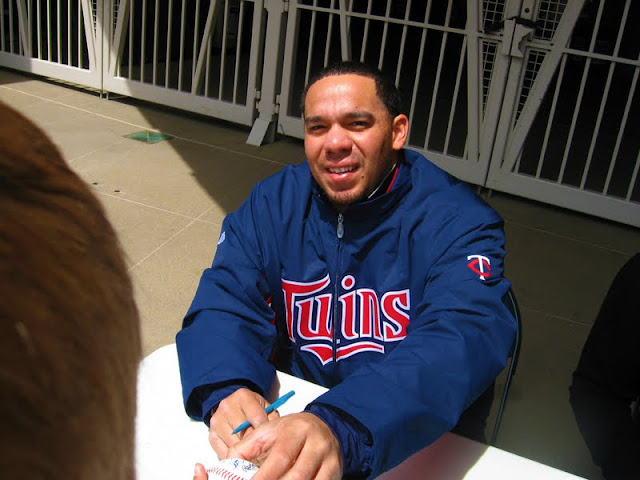 Another case of Nolan's luck coming through for us.  He has a knack for being in the right place at the right time.  He had begged me for hours to take him while Rick drove to get the books.  But Colton not feeling well, made us stay put till Rick got back and could give us a ride.  The timing was perfect.
We did the annual golden glove photo. 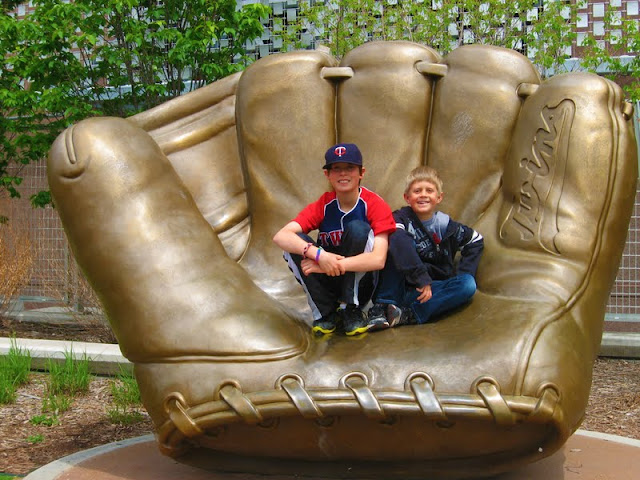 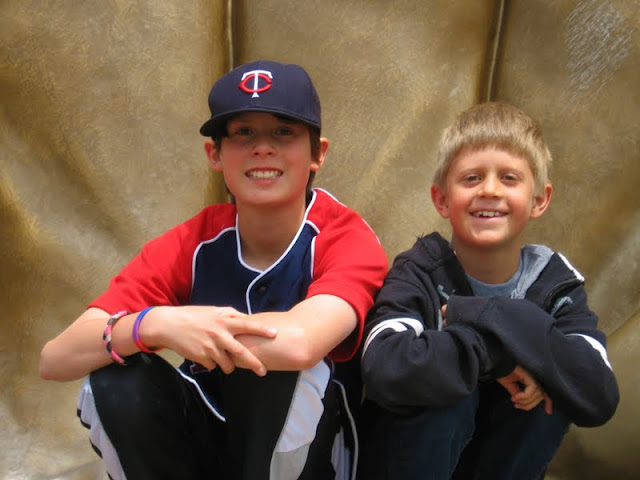 And wistfully said goodbye to Target Field.  The game was at 6 and we needed to leave and deliver our load of yearbooks instead.  Even Nolan is going old school sporting an old Santana jersey that is missing a button.  But he didn't care.  We practically had to pry his fingers off the gate to get him to go. 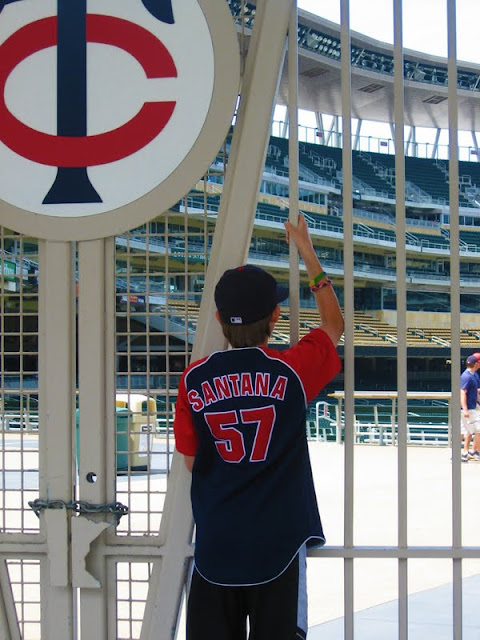 We left with the promise of a return trip to see a game sometime this summer.  Nolan offered to buy tickets for us... buddy, you got an awful lot of lawns to mow if that is the case!
Posted by Vicky at 8:47 AM