We earn our beautiful days around here. For every gray, cloudy, cold, wet, chilly, freezing, blizzard-y Minnesota-winter-day we endure, we bask in days like yesterday. All it takes are a little sunshine, a little breeze, no bugs and if you have a 4th grade track meet to attend all day? Well then it all adds up to a sublime way to spend a day.  Plus, Nolan's gym teacher went out of her way to call me and say she had chosen Nolan to represent our school in the opening torch run.

So Rick and I dashed to the clinic for lab work and arrived at the field as the buses were pulling in.  It was cool and a little brisk in the early morning hours. 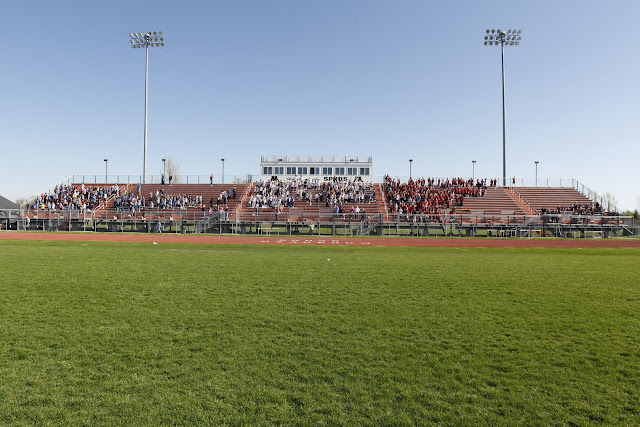 The first torch runners from Robert Asp school, Gavin and Izzie.  Nolan was so excited to see two of his friends be chosen to be torch runners. 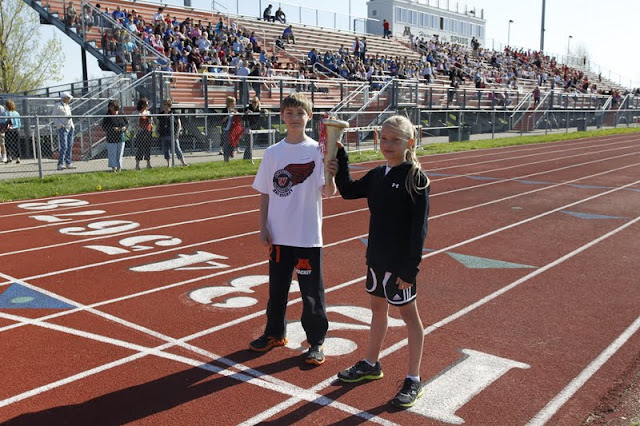 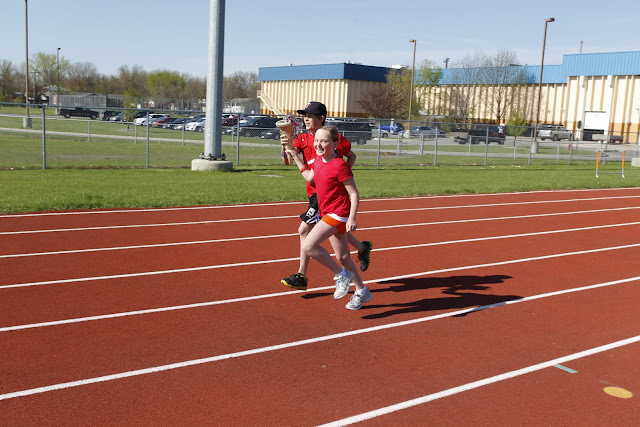 I don't think he stopped smiling all day. 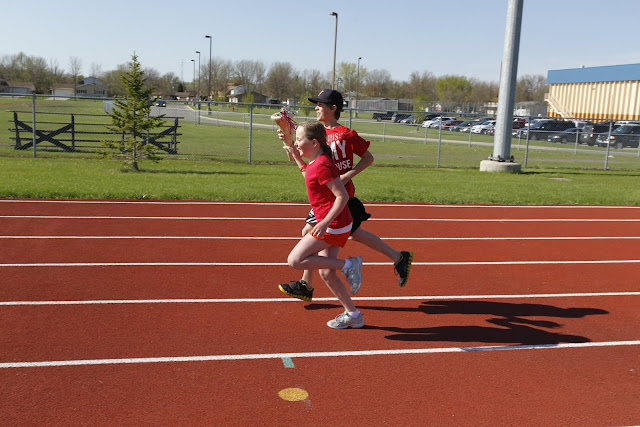 Ethan and a girl from St. Joe's school completing the torch run. 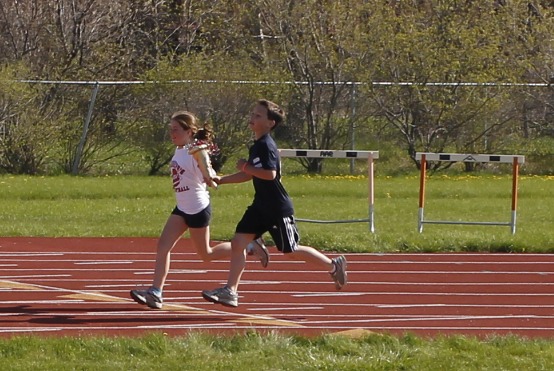 Nolan had three events.  Field events started right away and Gavin in the ball throw was up first. 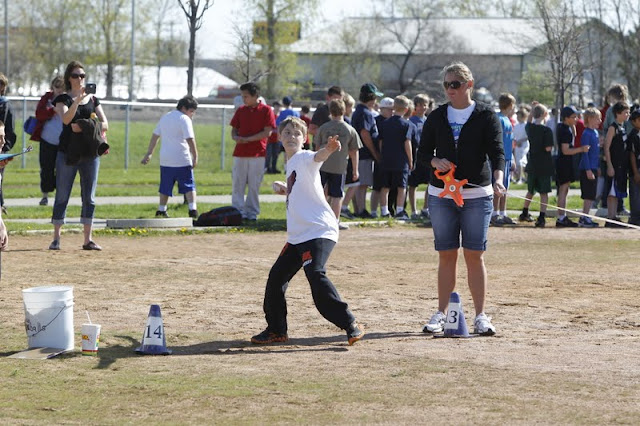 Alec tossing the ball for Reinertsen. 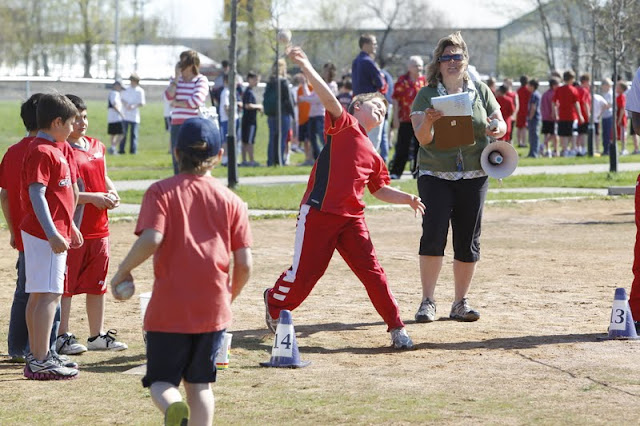 Finally it was Nolan's turn. 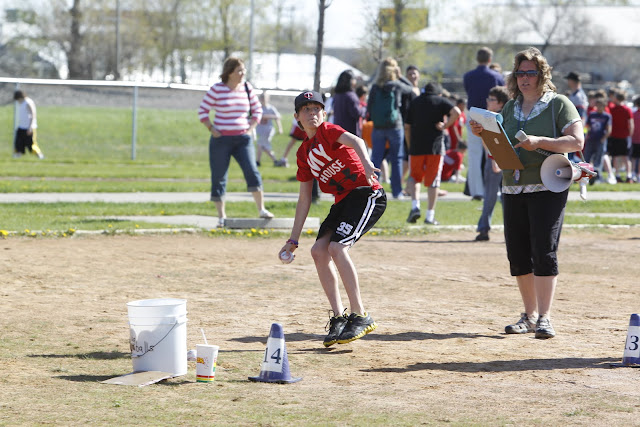 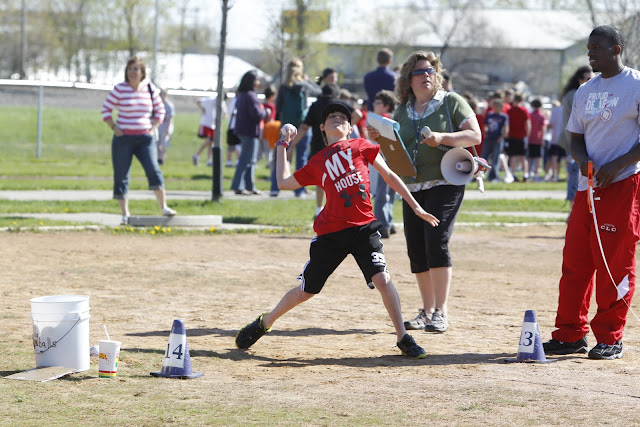 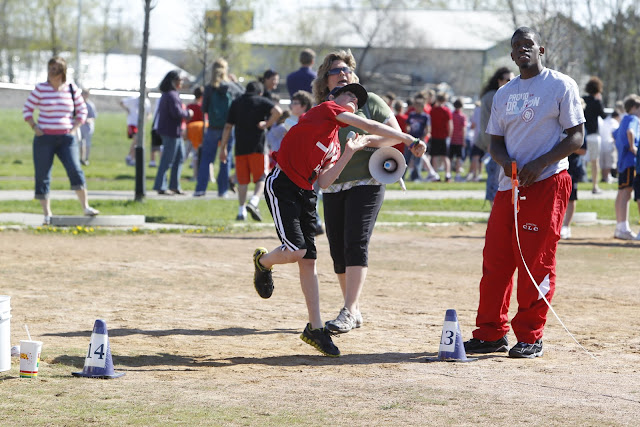 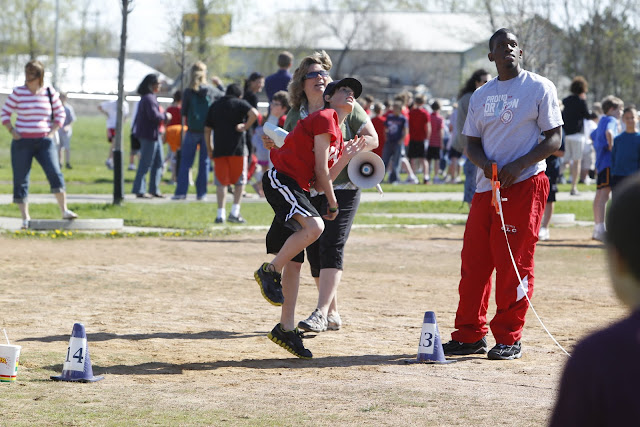 But then Griffin stepped up and with a Herculean launch, threw the ball 120.5 feet!!  Way to go Griffin! 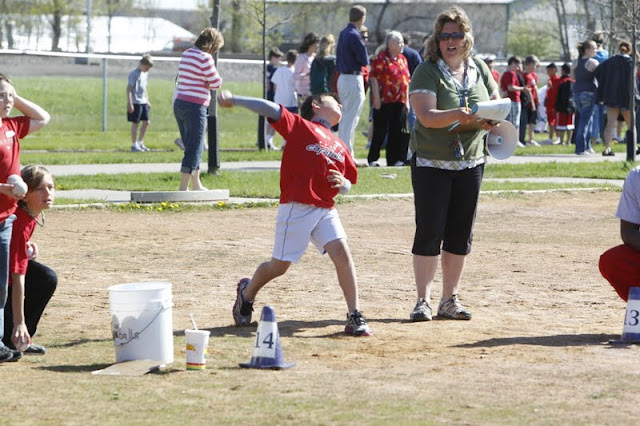 When all the school had taken their turn at the ball throw, Nolan ended up with third.  Way to go Nolan! 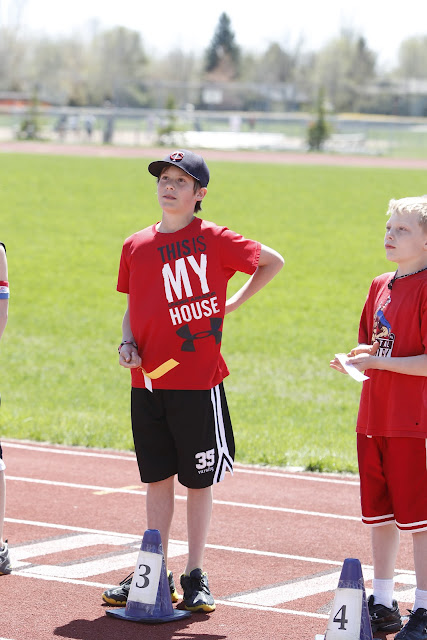 Nolan's friend Ethan had a spectacular jump in the long jump!  Rick's camera captured his jump in a long sequence, but here is the gist of it. 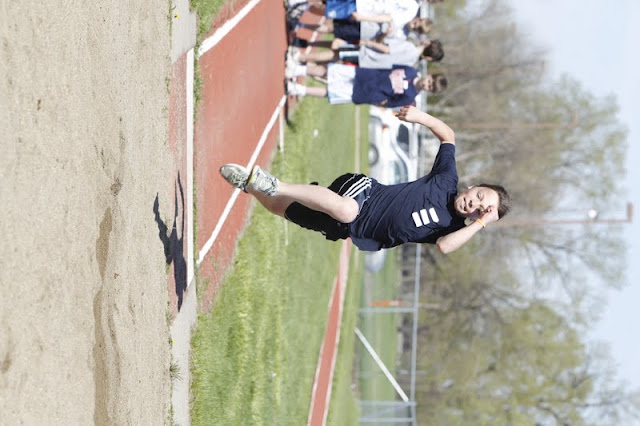 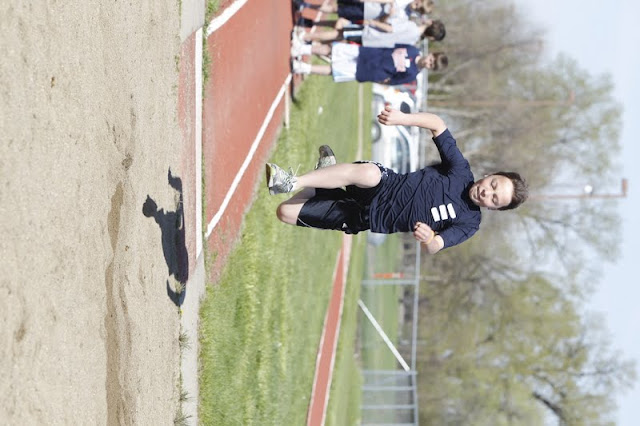 I can't say for sure, but I think he was second or third in this event.  Awesome job Ethan! 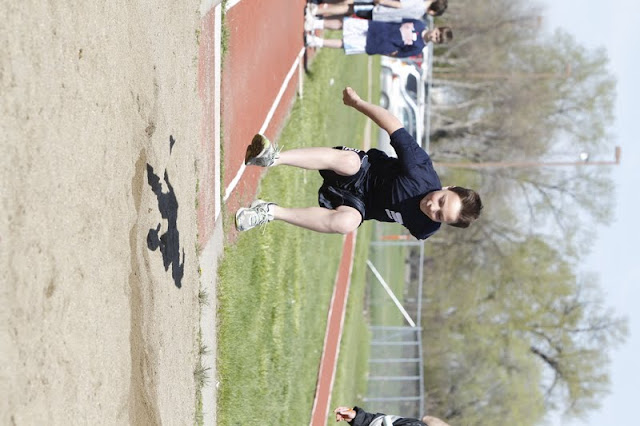 The Reinertsen kids were dressed in red.  4 elementary schools attended the meet, each wearing a different color.  Nolan and his friends sharing a blanket to keep warm before their events. 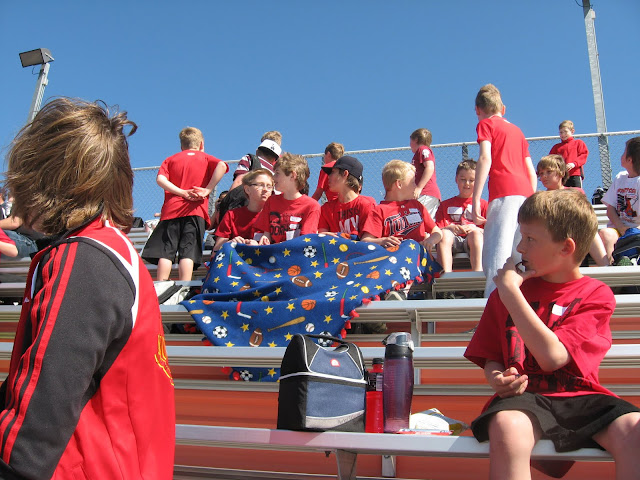 Some of the parents lined the fence by the finish lines for the races so we could cheer on the kids. 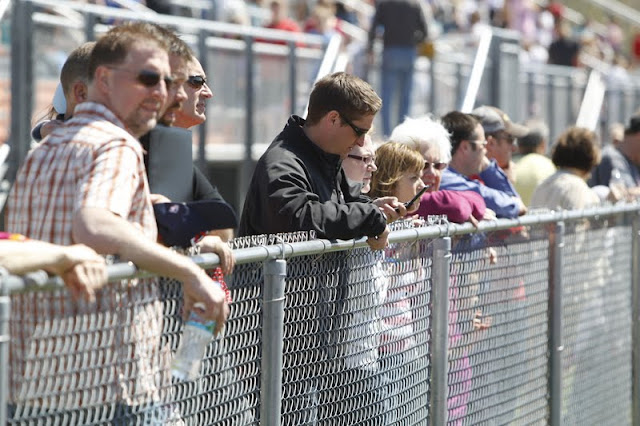 Nolan's second event was the relay race.  He was picked to race with two of the fastest kids in his class and he was so excited at their chances of winning, until he saw all the other fast kids line up with him! 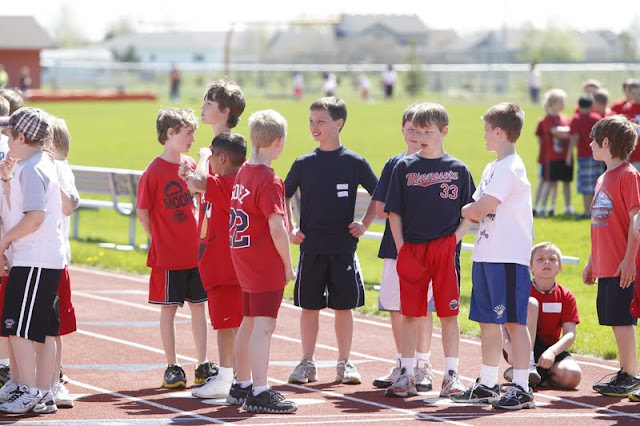 Riley got the relay team off to a really fast start, far right. 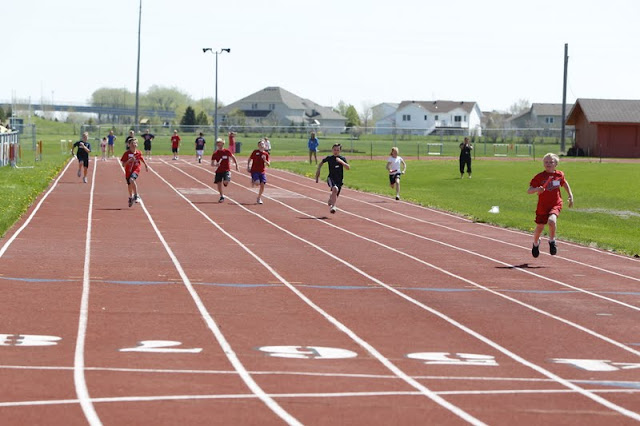 Nolan ran the third leg of the race and you can see they have held on to their lead. 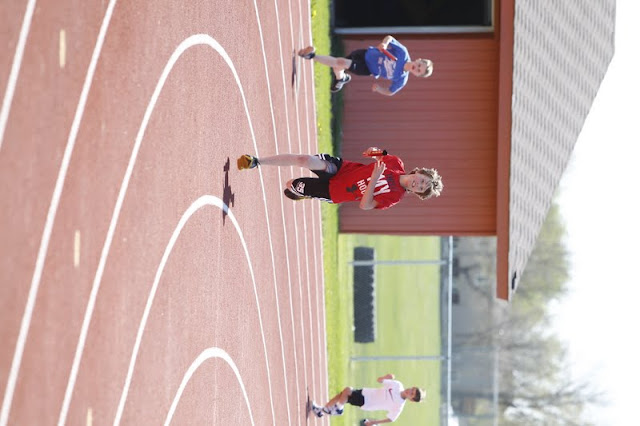 He is still smiling 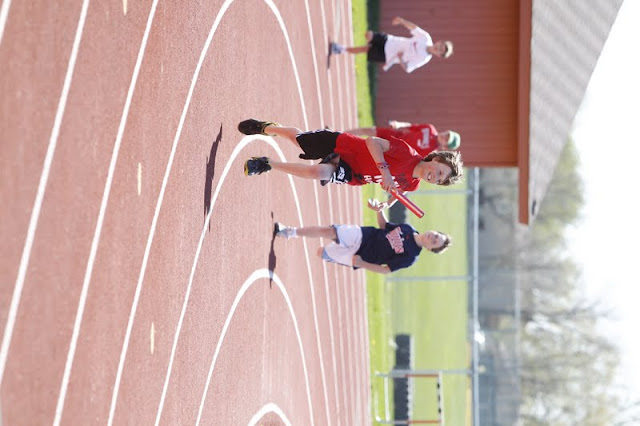 Nolan rounds the corner and hands off to his friend Tommy... 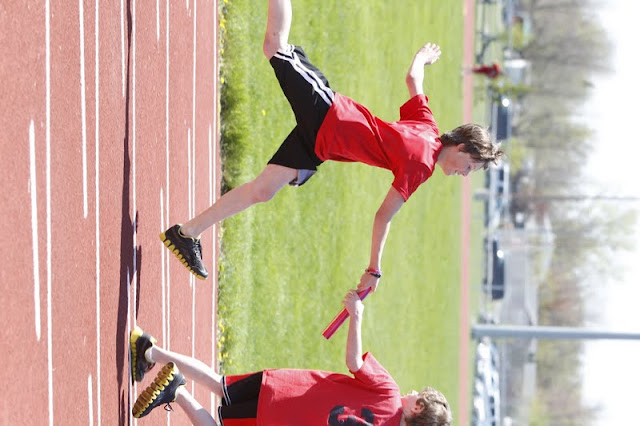 And Tommy is off like lightning.  The grace in his stride, the steady and sure pace, and the quickness and ease with which he moves are a real treat to watch.  Tommy has a gift you recognize, the second you watch him... you know what you are seeing is something special.  He later went on to run the mile and beat his own record with a time of 6 minutes and 12 seconds- yes- that is in 4th grade! 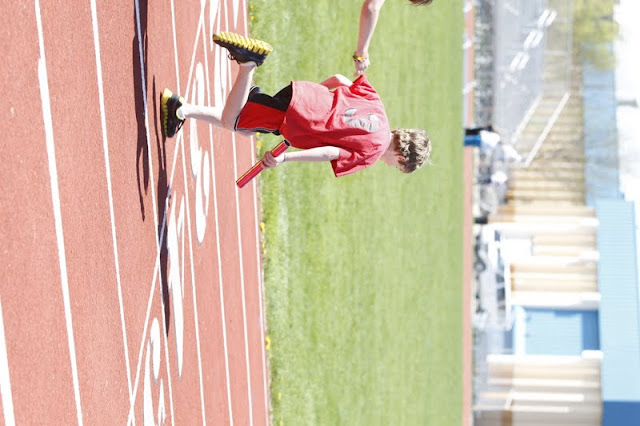 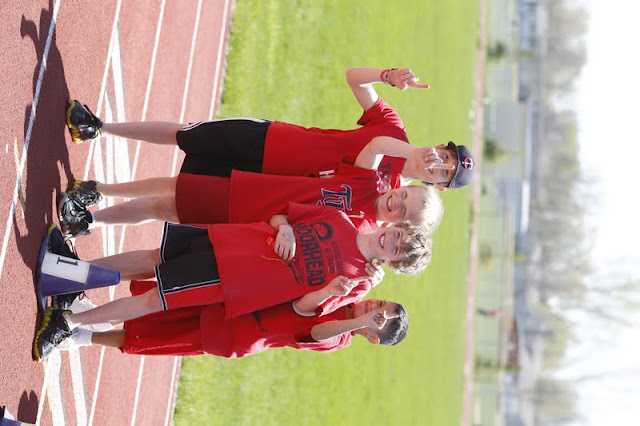 Nolan went on to run in the co-ed relay race, and they came in second place.  So he rounded out the day with a first, a second and a third place! 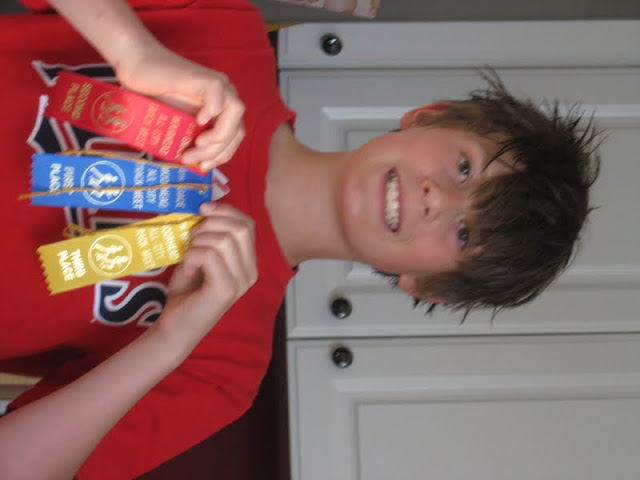 The fun of an event like this is that almost everyone left with a smile.  Winner or not, everyone got out of school for most of the day, or off from work.  The weather cooperated and all anyone could say was "Isn't this great?"
I said to my doctor the other day in regards to how I feel,  "I feel so lucky."  He looked at me with a what the heck are you saying- kind of look and then he said, "perhaps, at least in some aspects you are."  What he doesn't know.  What I can't say.  What is only a smidge of truth occurring to me... is that because of this c-word filter I've been given, these feel like the best days ever.  Its a choice I am consciously making.  To remember the sweet smell of sun drenched hair.  To take in the feel of sunshine warming the back of your neck despite a chilly breeze.  To relish the sound of kids cheering on one of their friends, and saving the loudest applause for the kid struggling the most to finish his race.
Maybe it has nothing to do with luck, but blessed beyond belief wouldn't be such a stretch.
Posted by Vicky at 8:41 PM