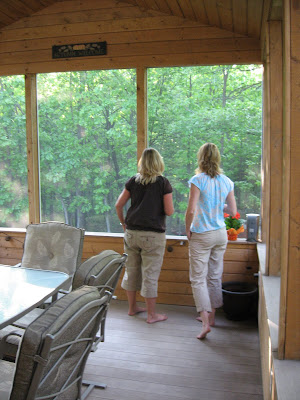 What is known in Minnesota as a 1 season screened in porch. It was a divine setting for book club. 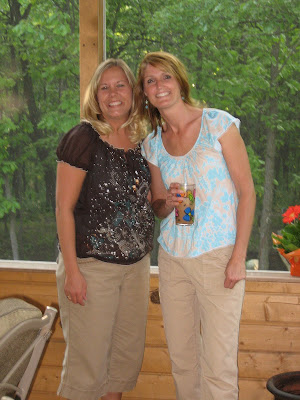 Our host Heidi on the left, and my friend and Heidi's neighbor Amy on the right. 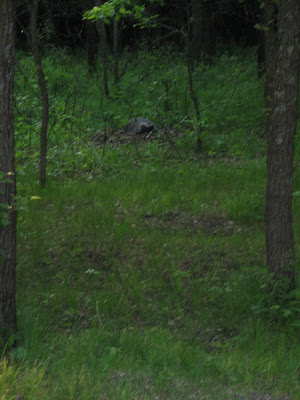 Chester, hiding in the trees. Can anyone do a good pig imitation? 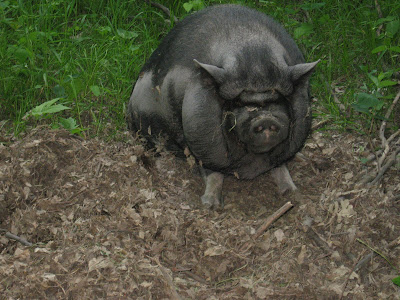 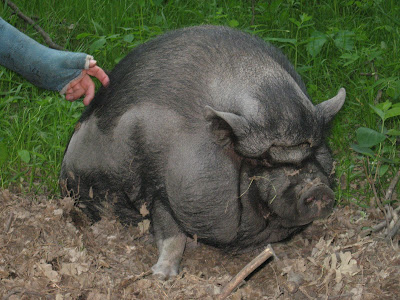 Do you want a backscratch? 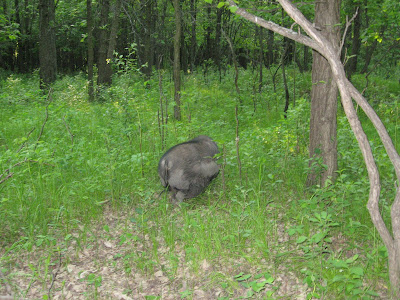 Till next time Chester!

I don't know if we're in agreement or not. I didn't really ask. But in my book? I vote for Chester to be our book club mascot! If you were to google book clubs you'd find a vast array of ideas about what a book club consists of. Some book clubs are known for their heated book discussions. I'd say ours are down right lively. And some are reported to pick books that lend themselves to themes that match the premise of their books. So had we chosen to read lets say, Charlotte's Web, we would have had the perfect setting for our theme. Still other book clubs reportedly have some pretty strict rules. Considering I didn't even read the last book we were meeting to discuss, I would so have been banned from one of those book clubs after last night! No, what truly sets us apart, I've decided, in addition to all the laughs we share and the fun we have, is our unofficial mascot Chester. Trust me, having a mascot is not mentioned in any of the book club descriptions I've ever seen. And he is no ordinary mascot. No, Chester is a pig.

Our gracious host, Heidi, discovered Chester living in between her house and her neighbor, Amy's house. They eventually figured out, that Chester, was probably not a wild pig and had probably been abandoned in the trees behind their houses by an owner who for some reason no longer wanted him. Yes, Chester was an orphan. But not for long. He wedged himself into the little house they provided for him and has lived there ever since.

The kids even game him his name. Chester was only fitting considered how many Cheetos he ate when they first started to feed him. Since that time he has happily had a home with Heidi and her family. During the flood, in fact, Chester was evacuated from his "house" in the back yard and given a new home of sorts in the garage.

With the flood waters now receding, it was apparent that Chester's "house" had fallen prey to the flood. Poor Chester, was added to the list of flood victims and until he learns his fate he has had to make due in some temporary housing. While Katrina victims were given Fema trailers to live in, Chester took matters into his own, um, er, pig's feet and made a bed out of ... LEAVES. Clearly, he is a clever pig! Last night, we found Chester in his bed of leaves out under the trees. He was very docile and let us all approach him, barely raising his head for the longest time. Finally with great effort he rose, snorted, and lumbered off further back in the trees. He may be our mascot, but he wasn't taking any chances on his role in our book club!!

Yeah, pretty much, we have The. Best. Book. Club. Ever. Thanks ladies! Here's to many more nights of fun, good food, lots of laughs, and oh yeah, the thing that brings us all together, our love of good books!
Posted by Vicky at 9:24 AM