On Saturday, January 21st, Rick and I headed down to the Xcel Energy Center to watch the Minnesota Wild take on the Dallas Stars.  It was also officially Hockey Day Minnesota, which our own town was honored to have hosted last year.  But the biggest reason we were going to the game?  Matt Cullen was being awarded the silver stick from the Wild organization for his 1,000th game in the NHL.  Rick graciously accepted when Bridget Cullen asked if he would go and take photos of the ceremony and the game, and the party afterwards.

I was feeling so poorly there for awhile, I didn't think I would be able to go.  But between eating lots of  spinach, kale, veggies and fruit all of last week and resting, I rallied, and everything fell into place for me to attend.

Now don't laugh, (okay go ahead... laugh) these first few images are mine, yes, with my little point and shoot camera.  This was my perspective of the game. 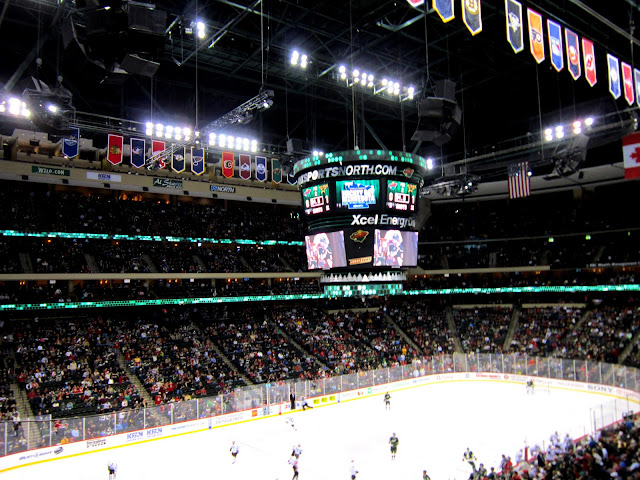 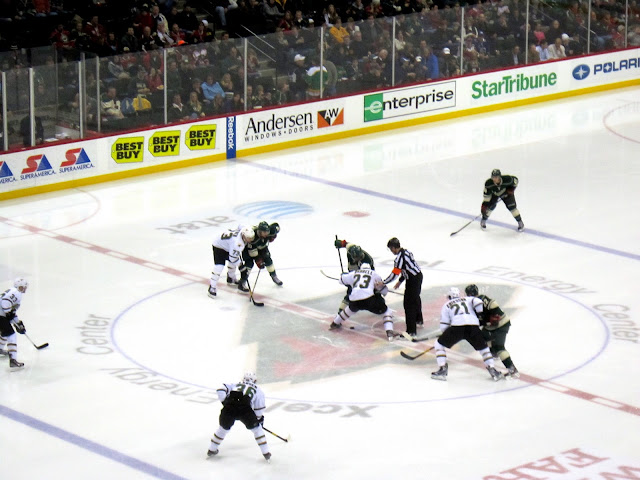 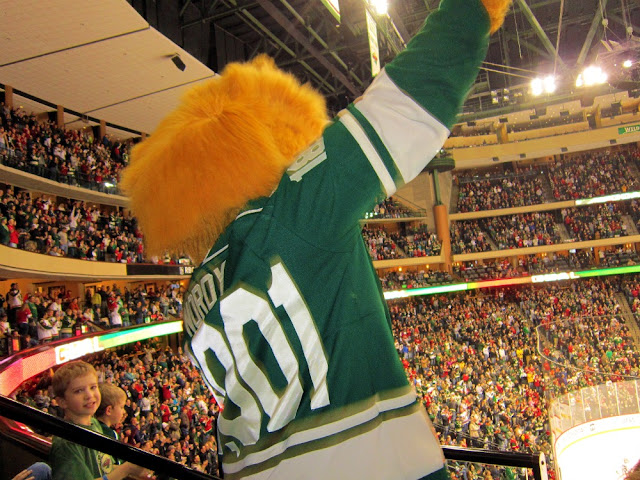 The Target shopping cart zamboni is my favorite... 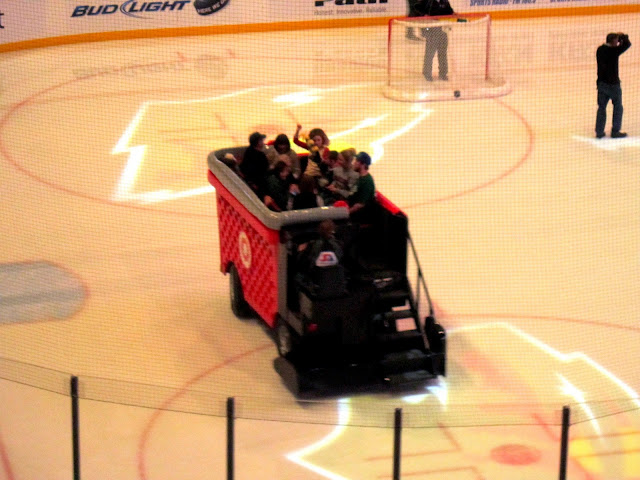 Just for the full effect, I took a short video of a goal celebration.  The Wild officially went up 4- 2 with this goal. They entered this game on a 4 game losing streak after a long road trip.

A few minutes before the start of the game, Rick texted me.  The Wild were letting him onto the player bench during warm ups and then he could take the ice and shoot photos of the ceremony.  He was beyond thrilled with the privileges they were granting him for the special occasion.  He took 1500 photos over the weekend!

Matt waving to the crowd. 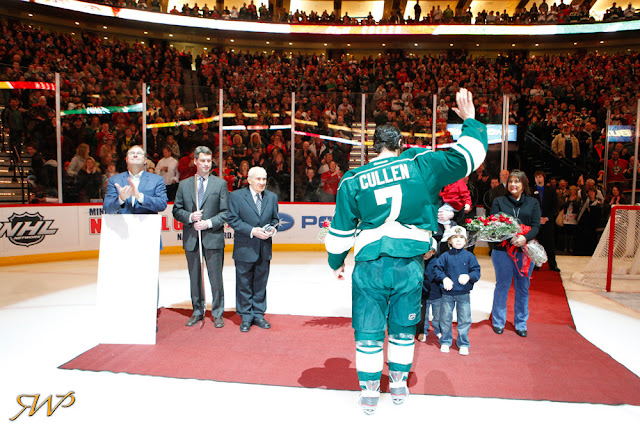 Matt's beautiful wife Bridget in white in the center, standing next to Matt's Dad, Terry, who is holding their youngest, Joe (1), with Wyatt (3) and Brooks (5) standing close to him as well.  Matt's mom is standing next to the boys. 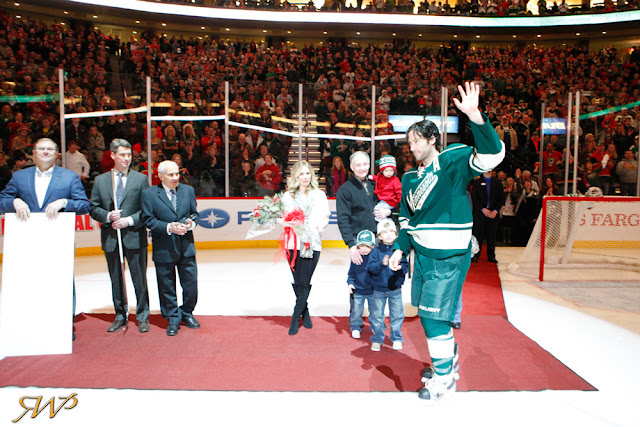 Matt receiving a crystal award for his 1,000th game. 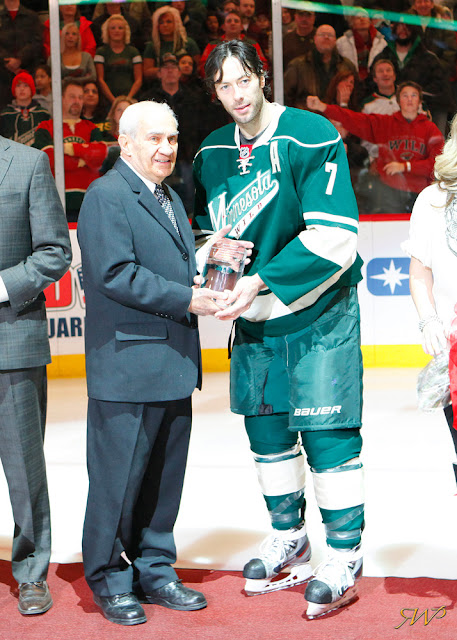 The silver stick award. It looks deceptively light, and its not.  Its solid and heavy. I loved what the sportscaster said about the ability to play in 1000 NHL games- you are not lazy if you can do that! 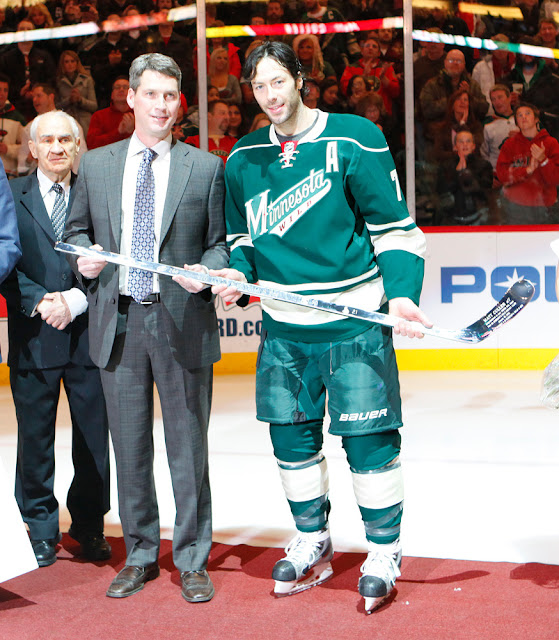 This a close up of the "silver stick." 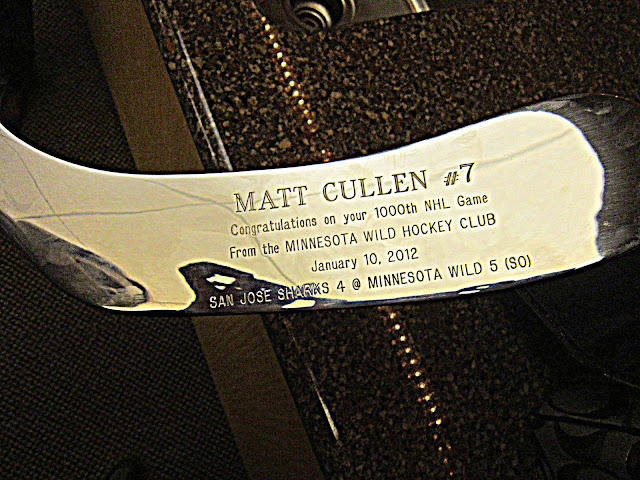 This is where I get all teary-eyed.  The Cullen Children's Foundation provides grants to organizations that provide funding for children battling childhood diseases, with an emphasis on cancer.  I know these funds will help a lot of kids! 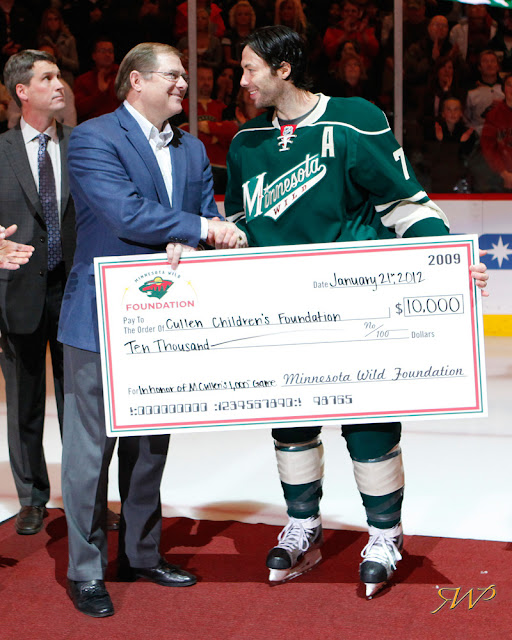 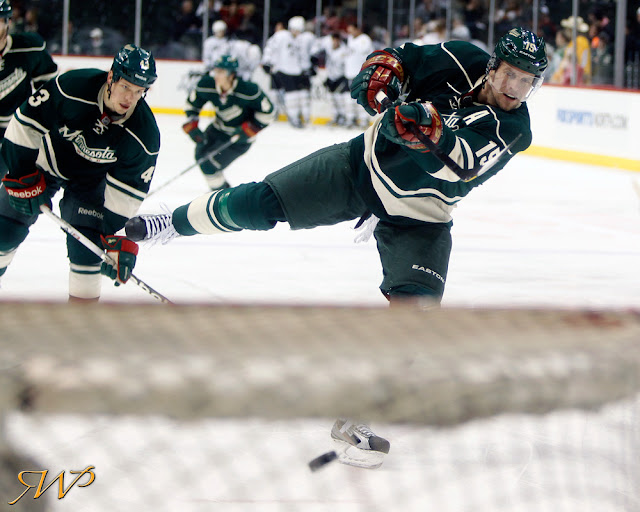 Rick stands behind the glass just behind the net while the players warm up.  The intensity always shows in their eyes. 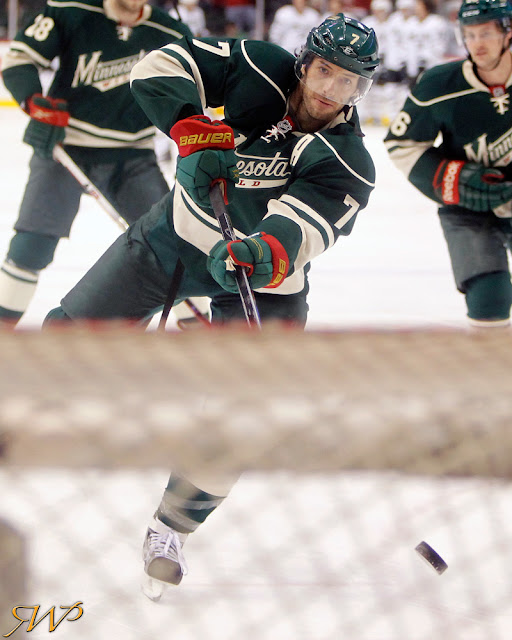 The face-off.  I didn't see the stats, but Matt won a lot of face offs Saturday night according to Rick's photos. 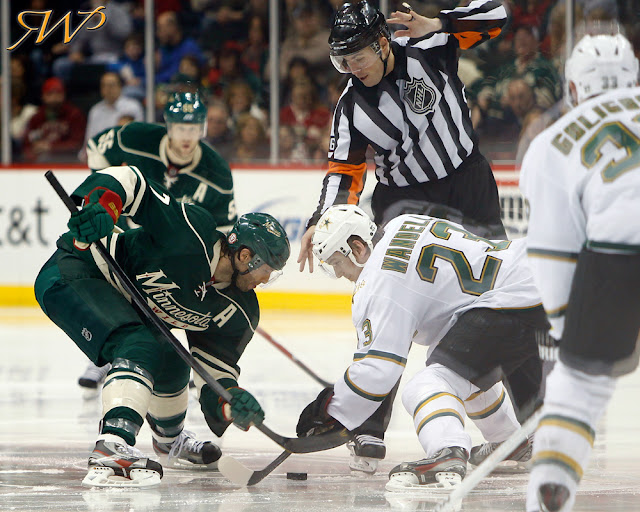 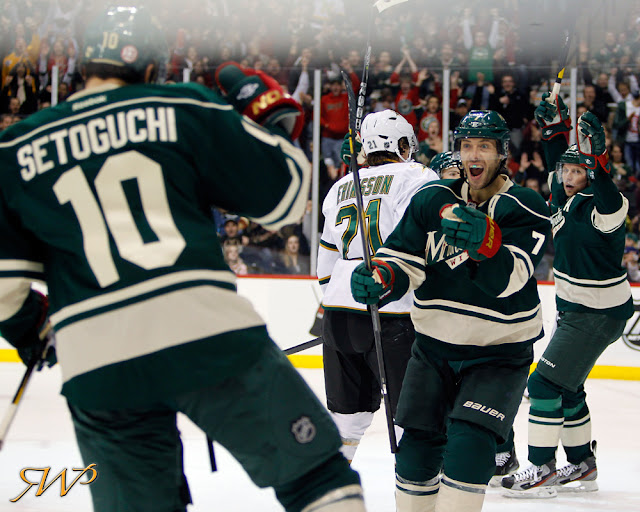 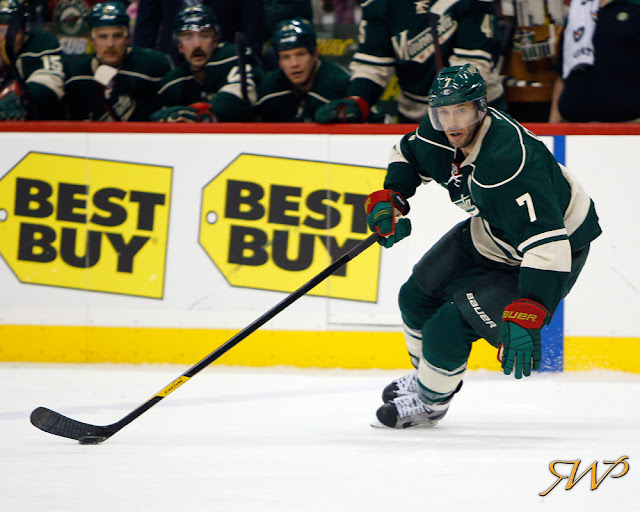 You know there had to be at least one fight... 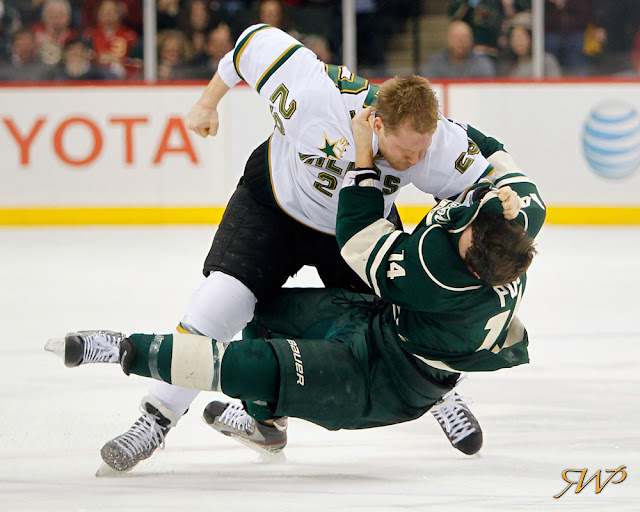 #36 is Chad Rau.  This was his NHL debut game and he is a Minnesota native.  And... he scored!!  Do you see the puck?  Its just out of reach of the Dallas defender trying to sweep it back from the goal line. 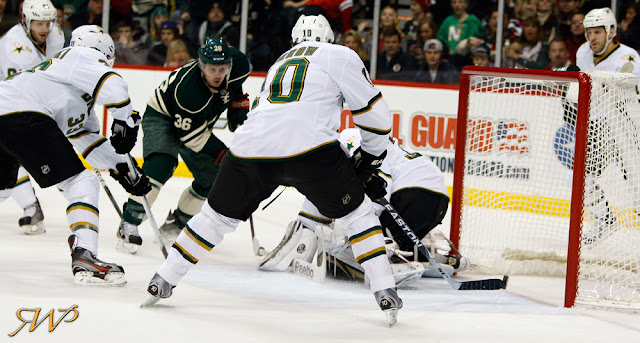 Look at the crowd behind the glass- the rookie just scored! 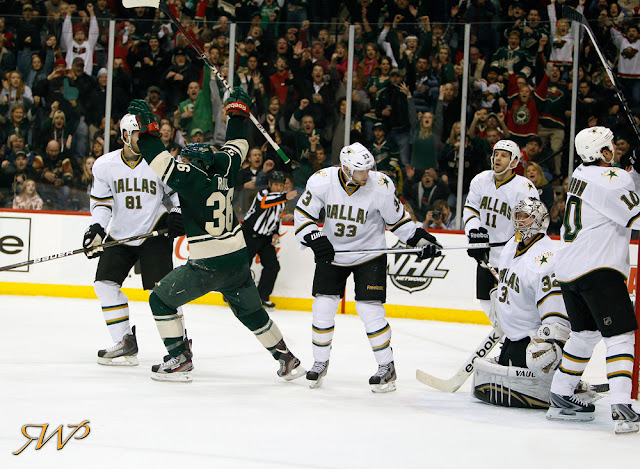 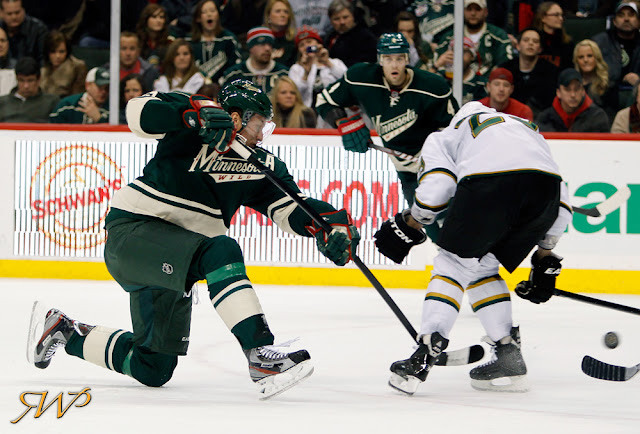 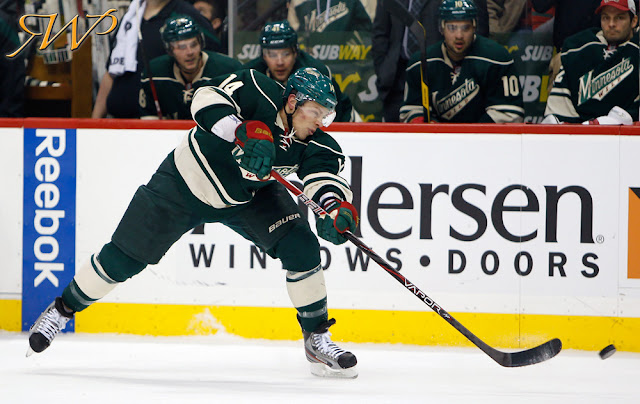 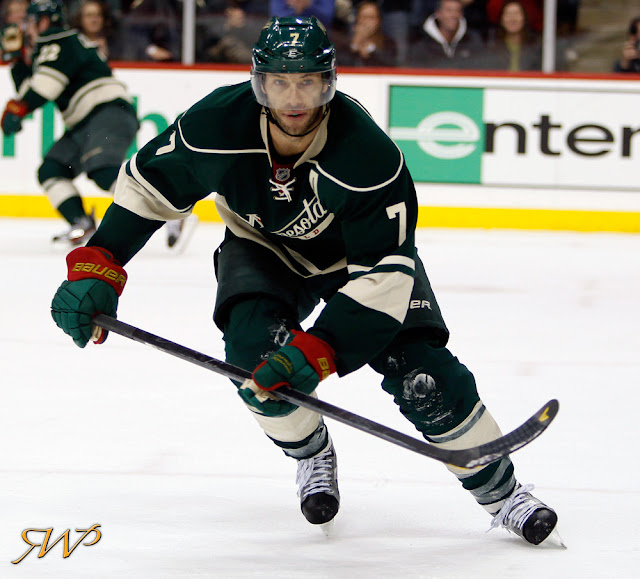 The Wild win 5-2!
After the game, Matt and Bridget hosted a party at a downtown restaurant.  While it turns out the restaurant owner had hired a photographer for the event, that was perfectly fine with Rick.  We relaxed,  talked amongst friends, ate yummy food, met some new acquaintances and had an enjoyable night.
From what I could tell  Matt's team mates showed up en masse.  As did Mike Yeo, the head coach and many others from management.  Its clear to see the respect everyone has for Matt.
But more importantly, its clear how blessed both Matt and Bridget feel.

"From what we get, we can make a living. What we give, however, makes a life."  Arthur Ashe

This is the quote you'd find on their Cullen Children's Foundation website.
They are the very essence of that quote. They're gracious, humble, and give back, immeasurably.
Congratulations to the entire Cullen Family!