We arrived back home from Minneapolis Sunday night to the news that the river had crested at 36.99 feet! Such a blessing and a huge relief! Other than some minor inconveniences and the weight of the whole will it/won't it debate, the flood was downright manageable this year. It still ranks in the top 7 of floods for the river. But its highly unusual that two of these seven historic floods have been back to back. Regardless, a permanent solution in the way of a river diversion has been a major source of debate for a couple of years. But funding, at the tune of billions of dollars and placement, as in which side of the river does it belong, have been great sources of debate.

We knew we had made a good decision in leaving for our big hockey trip as the temperatures soared into the 60's our first day. We were downright hot in our coats and long sleeves and it felt good to shed our heavy clothes along with our stress.

The first photo I took as we drove to the Xcel Energy Center, home of the Minnesota Wild, NHL team.  We were on our way to watch the Western Conference Hockey Association Final Five teams compete for the Broadmoor Trophy and seeding for the 4 different regional tournaments these teams will play in next weekend.  16 teams will compete in 4 regionals next weekend, 8 the next weekend and finally the frozen 4 and a national NCAA winner will be crowned.

Our small community of Moorhead, happens to have 6 of its hockey alumni playing in the Final Five tournament this weekend.  Division I hockey is a very high level of hockey and for 6 of our alumni to be playing this weekend is a major feat for our hockey community.  Rick scored a media pass to go and photograph the entire event and bought tickets for the boys and I to go cheer for our Moorhead players, playing for St. Cloud State, University of North Dakota, and Denver University.

Chris Vande Velde is in his last year with the UND Fighting Sioux. He comes back to Moorhead in the summers and coaches Nolan's hockey camp. Nolan has looked up to him since 2005 when he played in high school for Moorhead Spuds. Vande has been drafted by the Edmonton Oilers of the NHL and is due to join their AHL affiliate as soon as he finishes his college career this year. 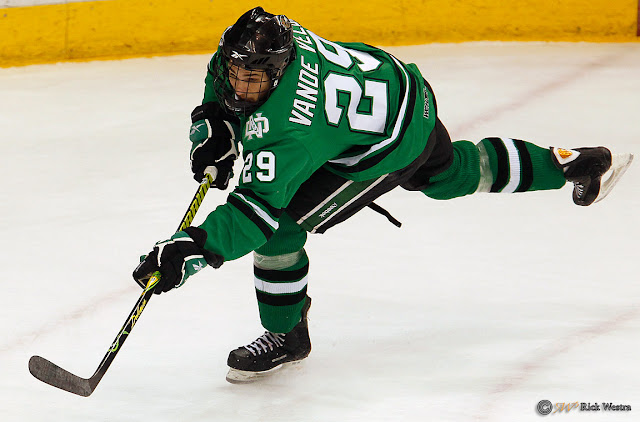 Nolan made signs for his favorite players as daddy spoiled us with tickets "on the glass." We had front row seats for the first two games and Nolan was hoping for his chance to be on tv. When we got home Sunday night, he was so excited to see himself as well as Colton and I in several shots on the recordings we had of the games. 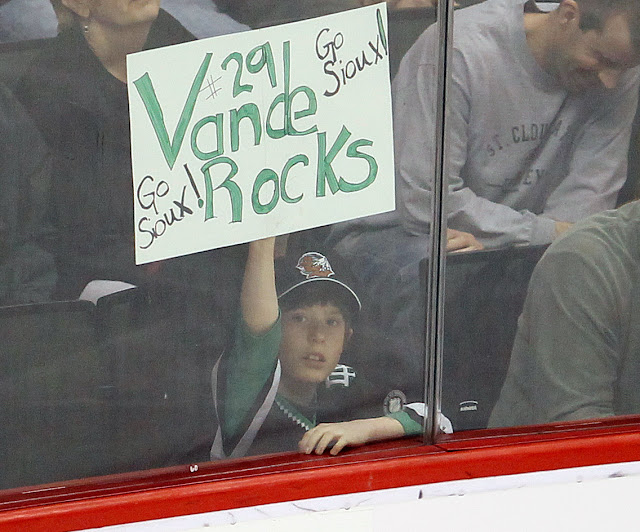 John Lee, younger brother of Brian Lee of the Ottawa Senators in the NHL. John has been drafted by the Florida Panthers of the NHL, but is currently playing for Denver. 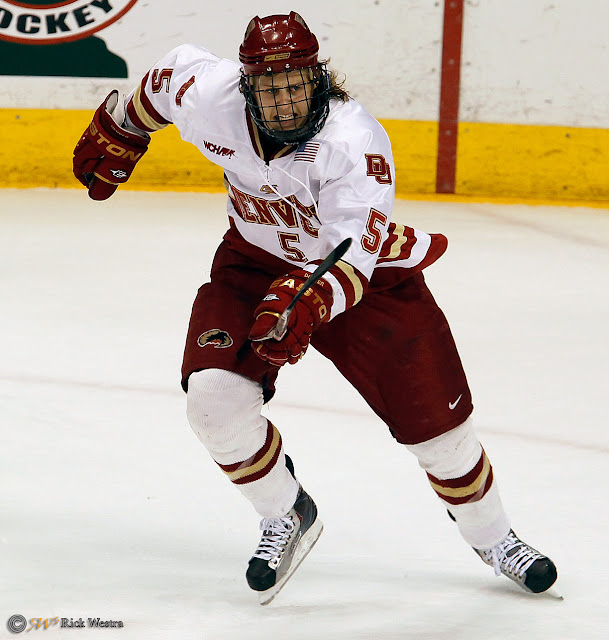 Jordy Christian, playing for St. Cloud State University, has been a friend since we first moved to Moorhead and enrolled Nolan in his first year of hockey. Jordy has deep hockey roots dating back to his grandpa who won a silver medal in hockey for team USA in the Olympics in the 60's. Jordy's uncle, Dave Christian, played on the 1980's Miracle on Ice hockey team that brought home the gold medal. What we love about Jordy however, is his passion and the exemplary manner in which he conducts himself on and off the ice. He has taken a genuine interest in our boys and has been known to take them golfing, or to come watch them play hockey when he is on break. 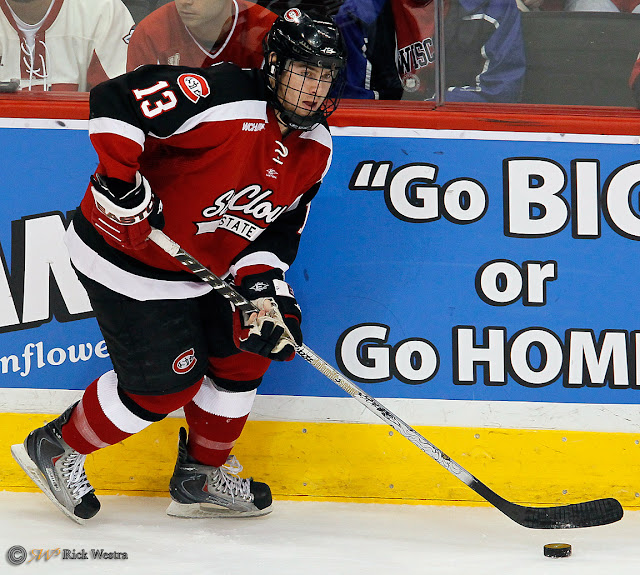 Our final night, the championship game pitted Jordy Christian and the St. Cloud Huskies, against Chris Vande Velde and the University of North Dakota Fighting Sioux, against each other. While it was an easy decision for most of us to wear out red and support Jordy, Nolan has been a Sioux fan for too many years. He bravely wore his Sioux jersey and cheered loudly against all of us. But the one time he took off his Sioux stuff, was when he waited for Jordy to come up from the locker room to see us. 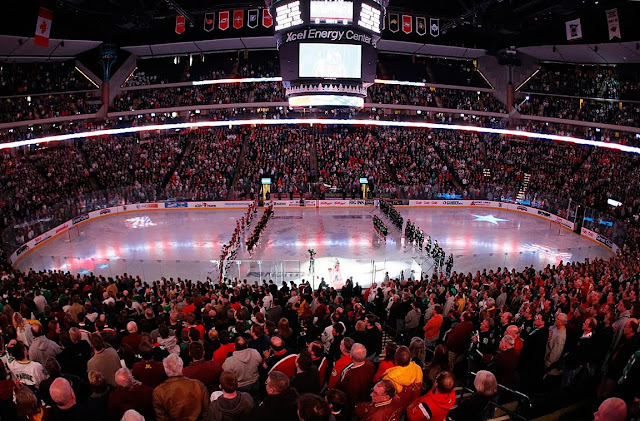 Nolan, Ryan, Jordy, Riley and Colton.  All of these boys have been Jordy fans since they were very young. 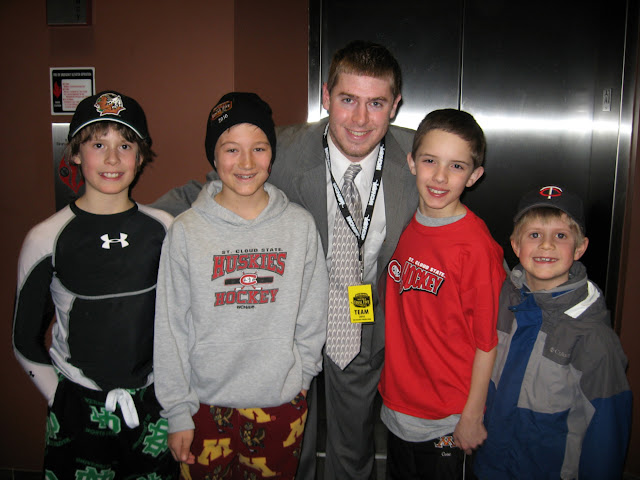 A highlight for Nolan to get his picture taken with Vande.  The Sioux came out on top in a close game, 5-3.  Vande's parents live in our neighborhood and instantly recognized our two boys who are always in the yard playing some kind of ball. 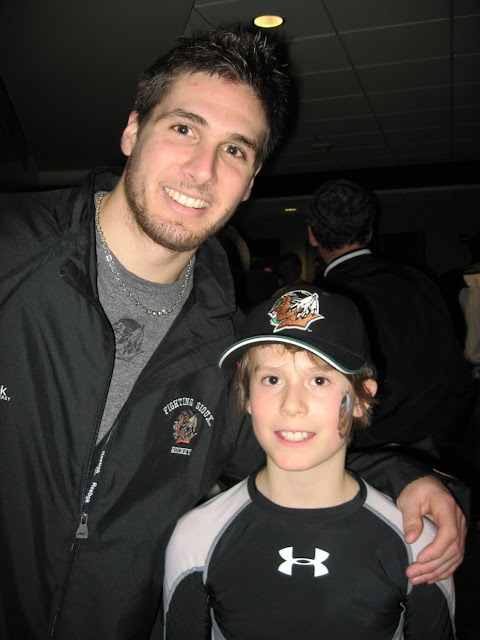 Of course the Final Five games weren't our only hockey games for the weekend. Nolan and his friends were invited to play in a hockey all star showcase. In case you weren't completely filled up on hockey already, I have more news and photos to share tomorrow...

I can't wait to come and check up on all my blog friends... I will be slowly making the rounds soon!
Posted by Vicky at 9:58 AM