These two.  They rebelled against the dress clothes for sure.  And to stand next to each other?  C'mon.  Pure torture.  Plus, although the sun was bright, it was in the teens for the temperature.  They were not happy.  So we told them to look serious in the photo.

It's one of my favorites.  Because somehow we pulled it off.  And you'd never guess by looking at the photo, all the drama that ensued before it was taken.

In the end, it was just worth it.  The time.  The patience.  The cajoling.  All worth it. 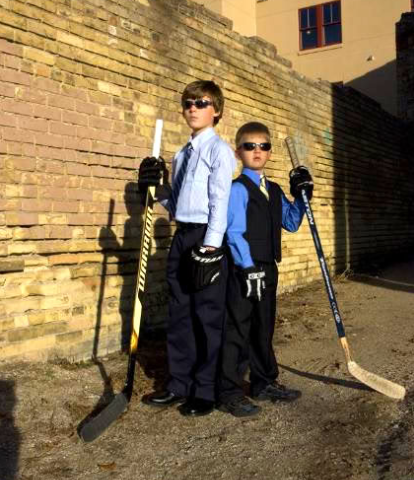 No different than this group of boys below.  Nolan's Squirt A team from what feels like ages ago.   For some of these boys it was their first Squirt International Tournament.  For most of these boys, it was the first year they had all played together.  The coaches invested a lot of time teaching them how to play the game.

We had no idea out of the 64 teams from across the country, we'd end up finishing in 5th place.

Their ability to finish so well, far exceeded our expectations.  I think the seed was planted.  The dreams ignited.  And every time these boys have been on a team together in the following years, they've gelled as teammates more and more.  They lead with their hearts, their strong will,  and their desire to compete at all costs. 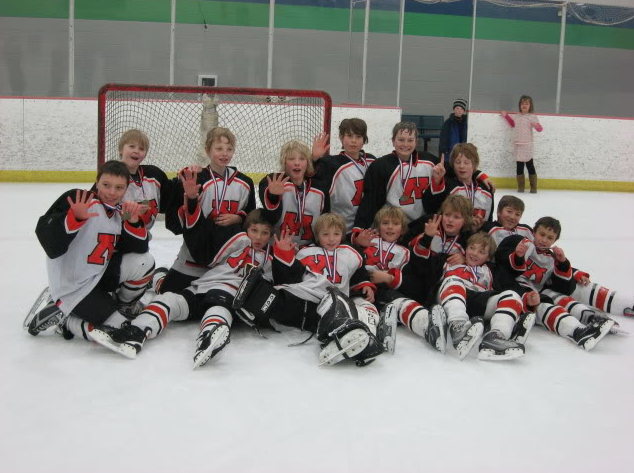 This weekend we have a big tournament.  It's the MAHA Regionals for Bantam AA hockey, held in Roseau, MN.  The top two teams will advance to the State tournament.

Time and again you've shown us, what happens when you leave it all on the ice.  And you always do.  Lots of sweat, sometimes blood, and even tears- along with the victory celebrations like the one above.

We believe in you.