I didn't forget! I just haven't stopped running since we returned.  Rick and I left last Wednesday morning for our two day excursion... to St. Paul. On the surface this may not seem like a big deal, but the excitement factor for me in particular was huge. I'm a little embarrassed to admit, I've never.... been to a Wild game. I have been to the Xcel Energy Center more times than I can count, but I've never actually seen a real NHL game!

At the beginning of every NHL season, Rick contacts the media person for The Wild and asks if he can come photograph some of their games. Its well known, that Matt Cullen, #7 for The Wild, is a Moorhead native. The Wild randomly select a few of the dates Rick requests and let him come shoot at those games.  Rick tries to shoot photos of Matt for his to use for posters for Matt and Bridget's Cully's Kid's Foundation.

And this time? Thanks to Matt and his wife Bridget, I got to come too.  We found a discounted hotel room nearby and were able to walk to the Excel Energy Center.  The Wild were playing the Chicago Blackhawks and we were in for a thrilling game! 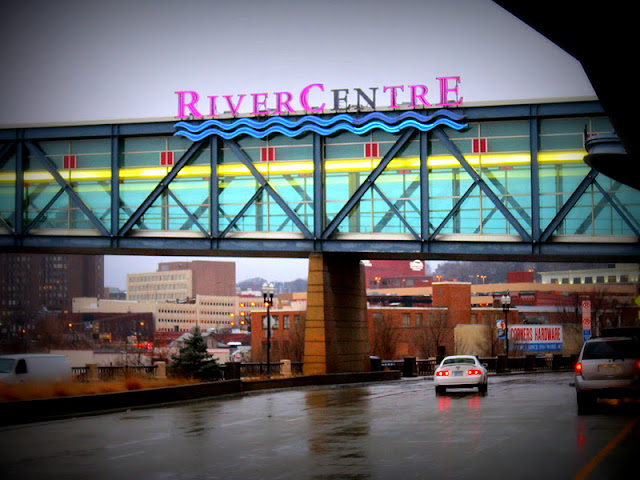 We arrived really early so Rick could get set up. 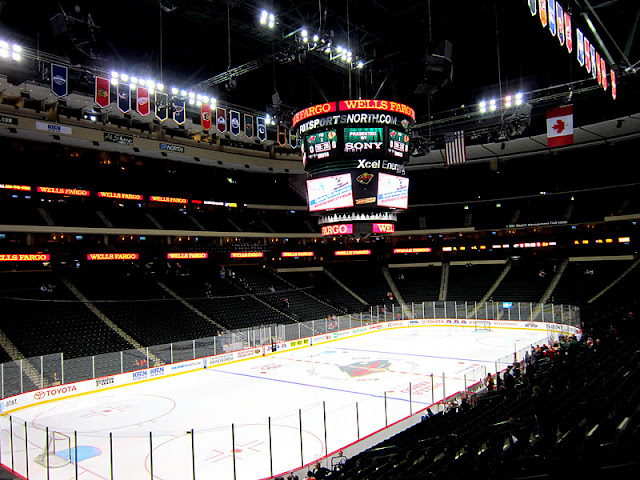 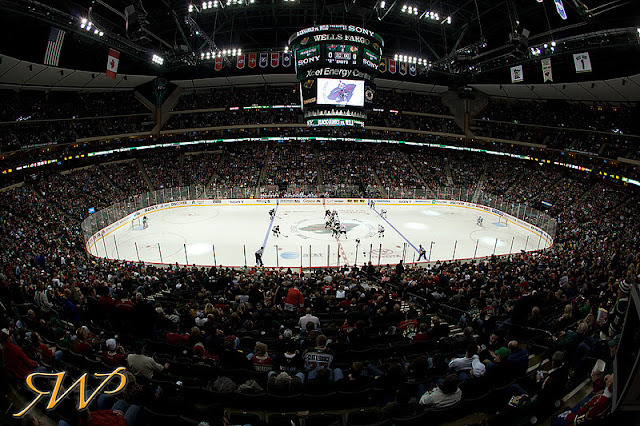 We've watched Jonathan Toews, #19,  play in college at UND many times, but haven't seen him play for the Blackhawks. 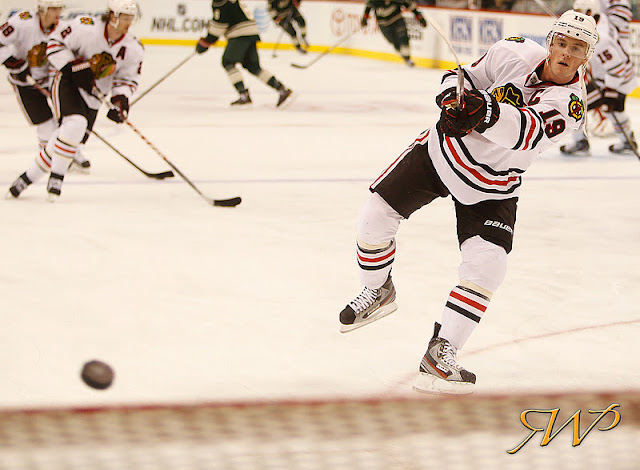 The night before the Chicago game, the Wild had been in Winnipeg to play the Jets.  Matt was visibly absent from the line-up.  We wondered if we'd even get to see him play.  But then we saw him. 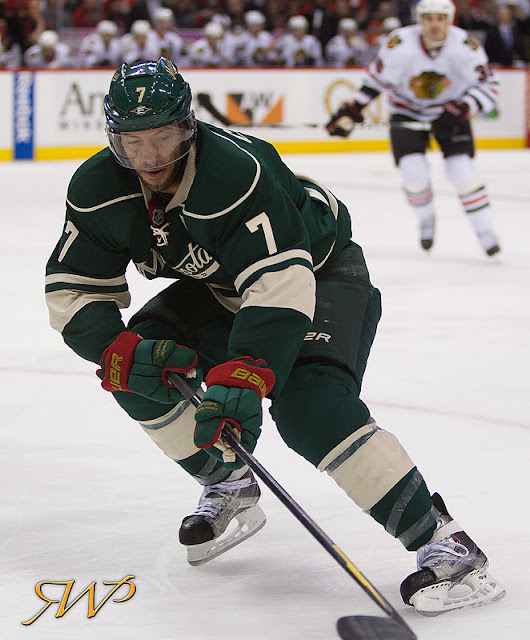 Admittedly the first period was rather flat and the crowd was fairly quiet... but then... 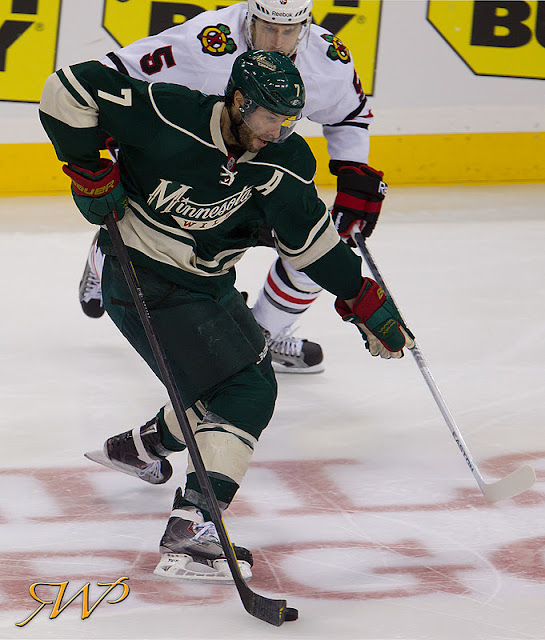 A fight broke out.  And as most fights do, it served the purpose of getting the teams all revved up, and the crowd along with the teams. 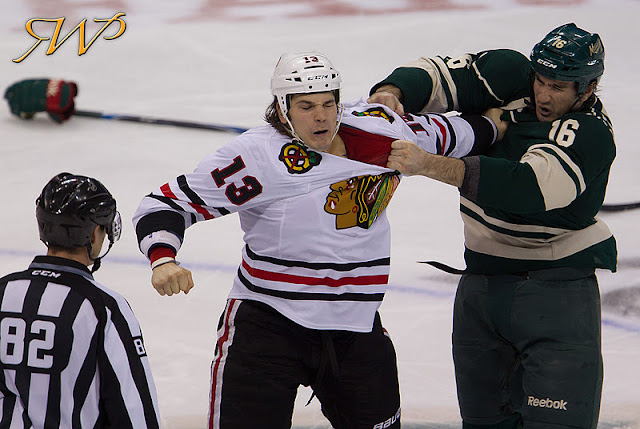 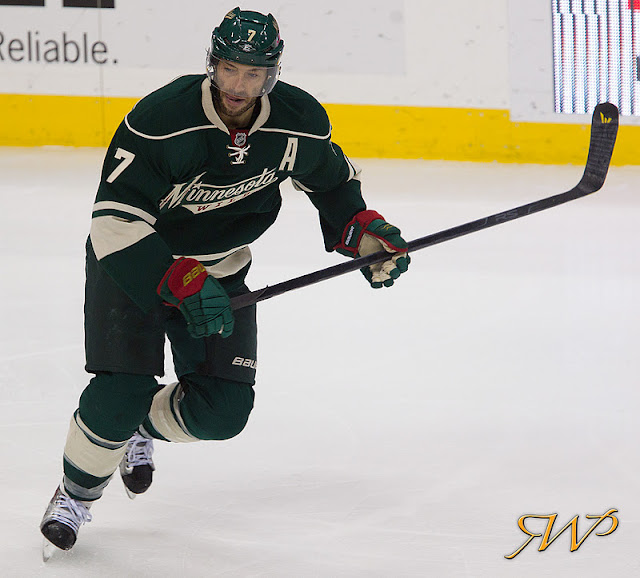 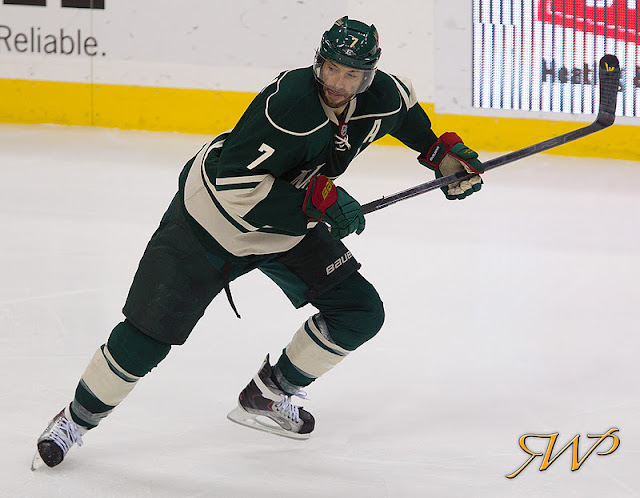 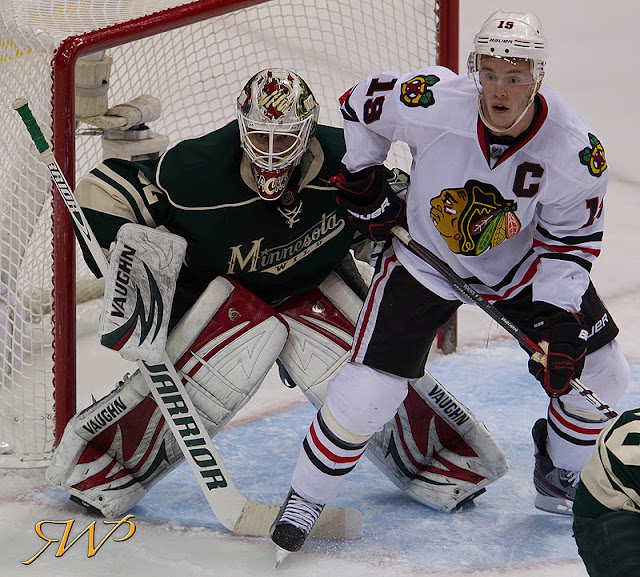 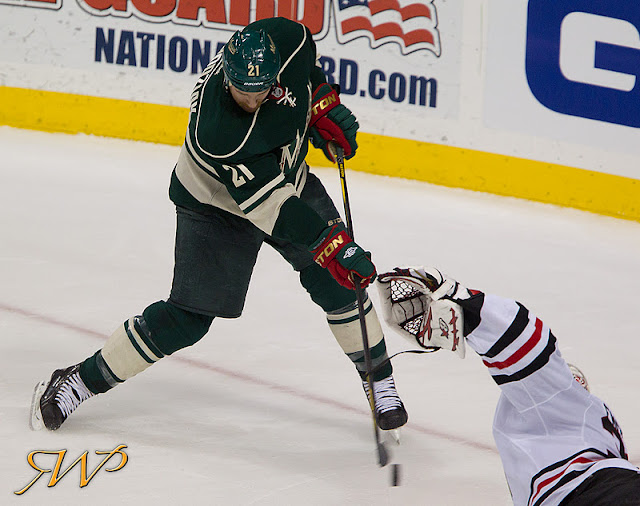 And then, look who was in the perfect position to knock one in?  #7! 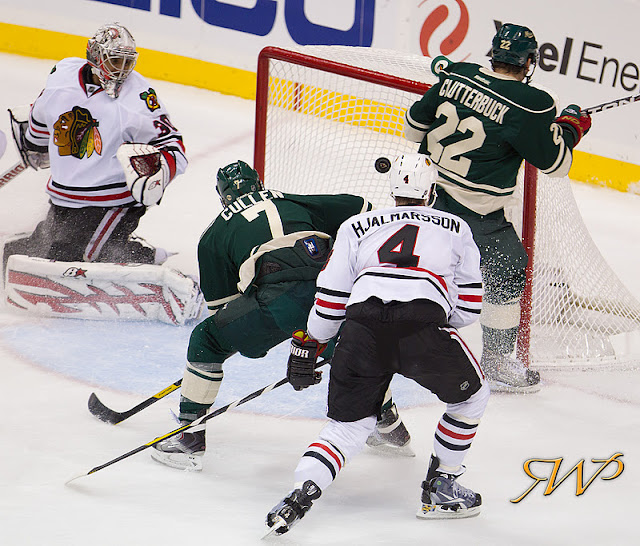 Way to go Matt- love those victory shots after the goal! 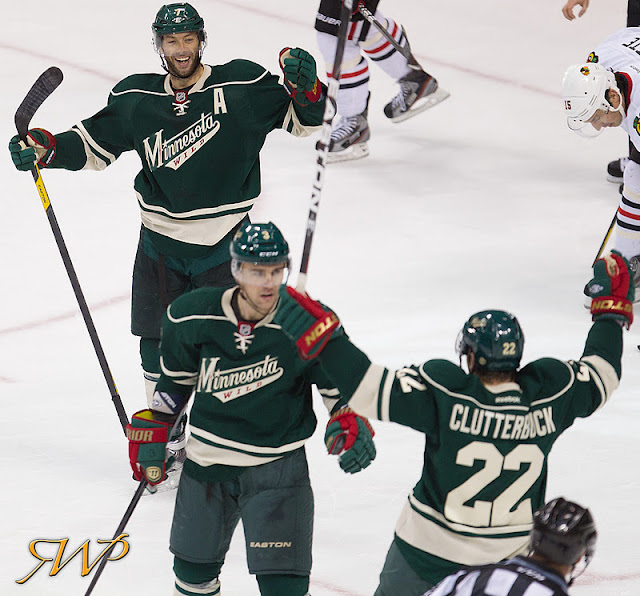 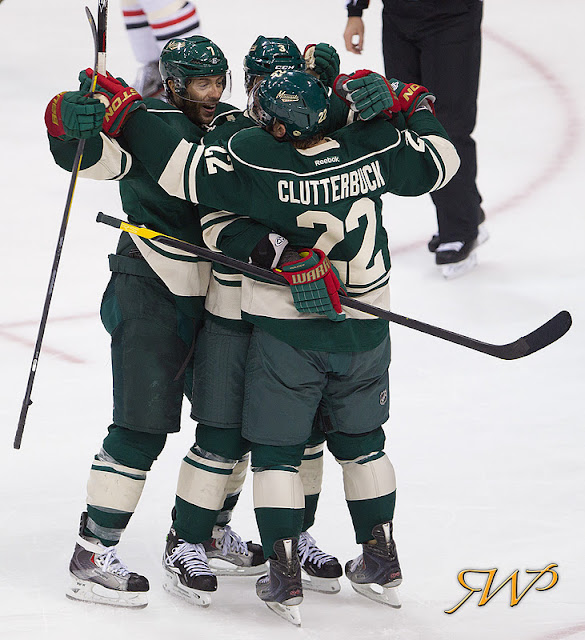 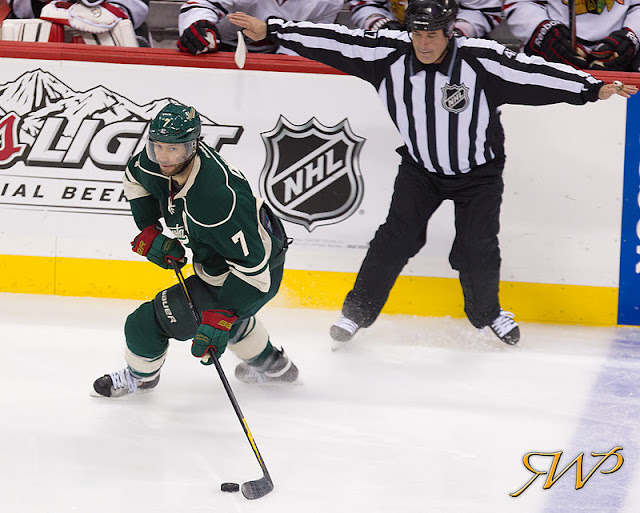 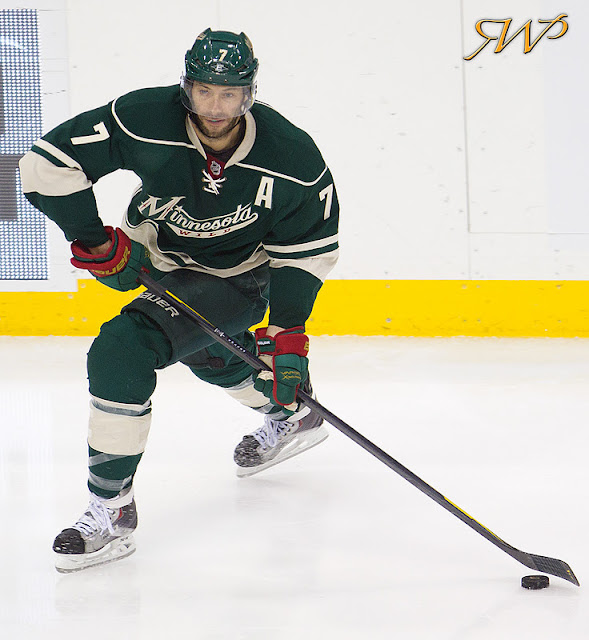 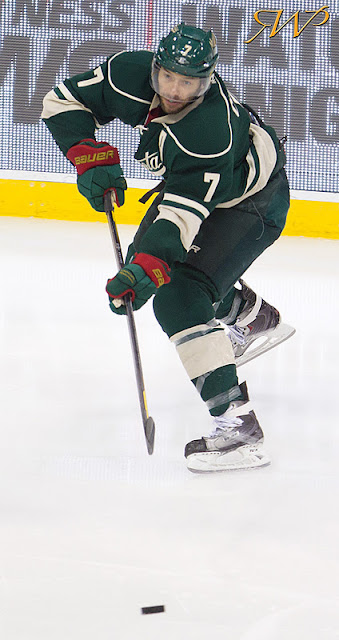 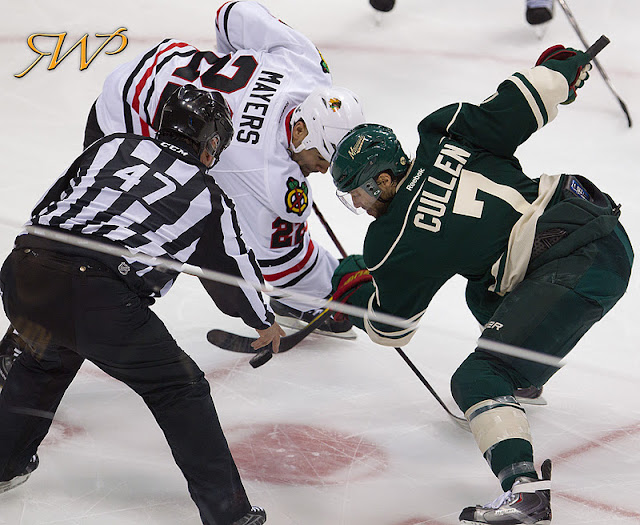 All of our kids try to flex their sticks, but they can't quite do it like the pros can- look at his stick! 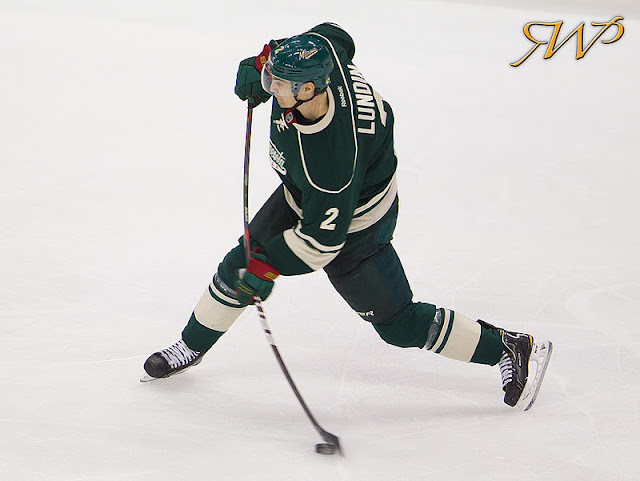 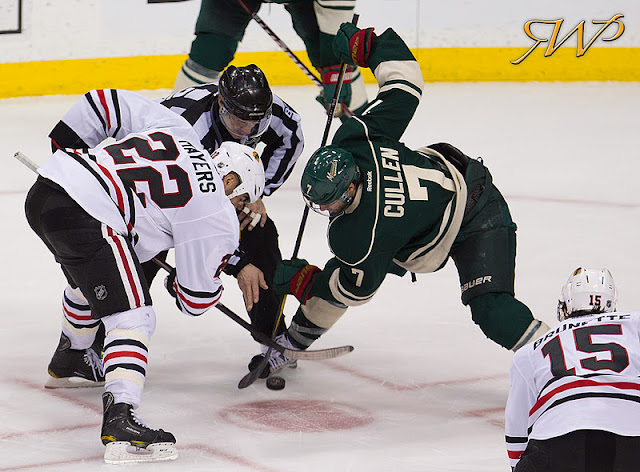 Bridget arrived right after the game got under way.  She is directly to the right of me in the photo below. I am so intently focused on the game, and trying to listen to her at the same time.  And do you know what she is telling me?  The reason Matt missed the Winnipeg game is because he caught the flu- from either Bridget or one of this three boys.  So Tuesday night he got two bags of fluids in an iv, and Wednesday morning he got two more!  He was skating on a bit of pasta in his stomach and some gatorade after nonstop stomach flu ran through his entire family, including himself. And he not only poured his heart and soul into the game- he scored!
The game ended in a 3-3 tie.  After a scoreless OT period, the game went to a shootout!  I was getting the full meal deal!  And Matt was picked to shoot first.  Bridget said I had to hold her hand while she closed her eyes.  We were both so wound up with emotion.  If we could have willed the puck in on our own, it so would have gone.  Except, it didn't.  And neither did the next Wild shooter.  But the Blackhawks managed to find the back of the net, and the Wild lost in a shootout.
I had a hard time feeling too bad.  It was such a great game to watch.
I splurged that night.  I bought myself a Christmas present.  I bought my own Wild jersey.  And after seeing the way Matt played?  I was seriously teary eyed knowing how weak and tired he must have felt.  But he gutted it out.  He could have taken the night off, but he didn't.  I was only semi-shy in waiting downstairs for the team to come out of the locker room.  I simply told him I knew, for other reasons, what its like to gut it out sometimes.  He totally inspired me and I was grateful to get the chance to say so. 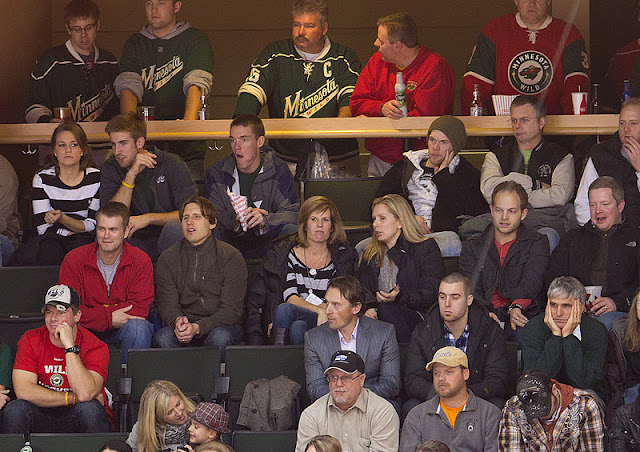 After the game, Rick and I walked over to the St. Paul hotel for a late night appetizer.  St. Paul was lit up and festive and downtown was lively with people coming and going. 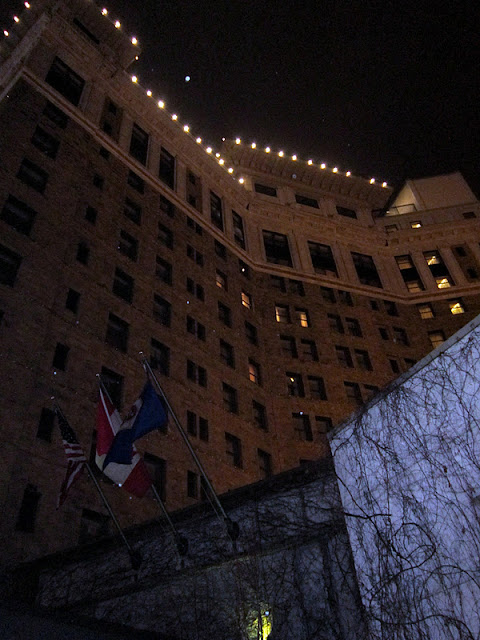 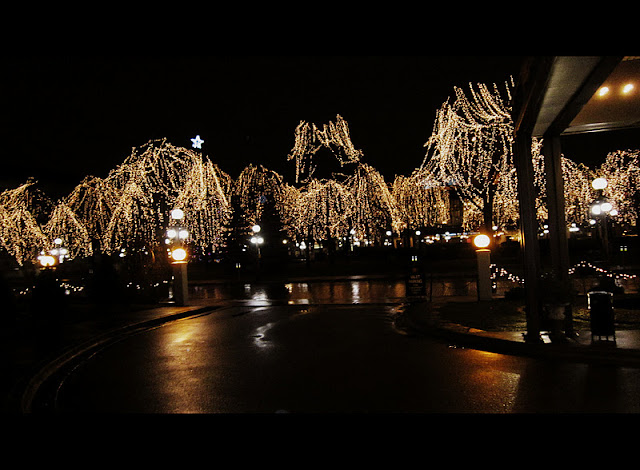 The next day I spent at the Mall of America doing some Christmas shopping while Rick drove to the plant to pick up some game programs.  I looked, and I looked, and looked some more.  But I was so filled from the day before, I felt like I needed nothing.  Maybe that is the best Christmas present of all. 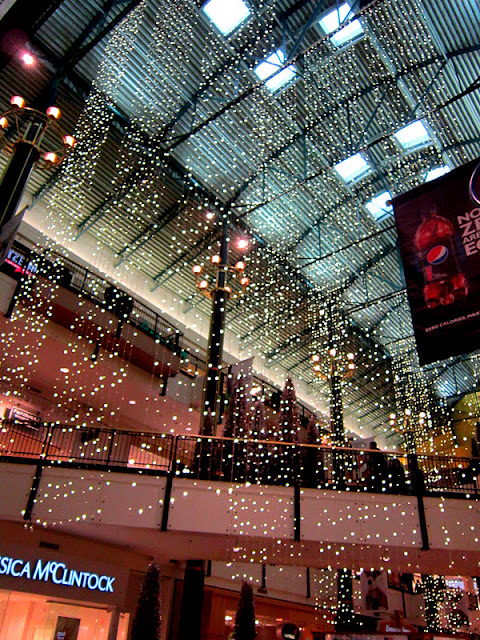 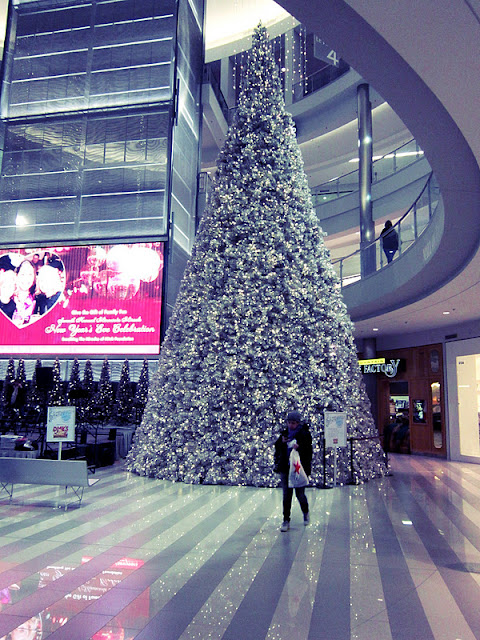 I feel like a broken record- but I simply can't say it enough.  Thank you.  For showing up, and reaching out, and reading and honoring me in all the ways you do.
Wound clinic tomorrow, and Dr. Panwalkar on Tuesday for results of my tests, and chemo.
Think this would make proper chemo attire?  I just might... 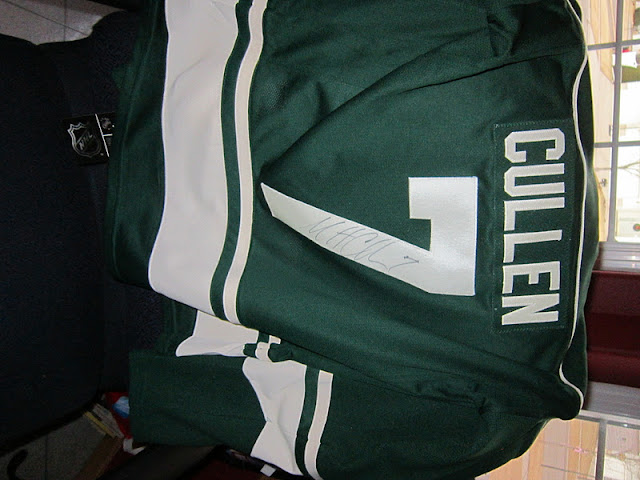