Its difficult to adequately express in words sometimes, the deeply generous acts of so many people, for our family.  This past weekend we were so honored and excited to have been given tickets to the Twins game on Saturday.  We had amazing seats in the Legends Club. Along with the tickets came a hotel stay for two nights, and a surprise "tour" of Target Field before the game.  Let me just say, we had a completely fabulous time.  We got the "rock star" treatment, and it will be a weekend we won't soon forget.  We left Minneapolis late Sunday night and the kids re-hashed every detail of their magical two days.

Our tour guide was Tom who is the Coordinator of Engineer and Broadcast.  He has been with the Twins for 22 years now, and can't say enough how thrilled he is to be working for such an outstanding organization.  Rick was in techie heaven.  It was obvious Tom had such pride in the facility and its state of the art broadcast equipment, as well as the overall Twins organization.  The boys and I were simply in awe of all that it takes to showcase a Major League Baseball Team. 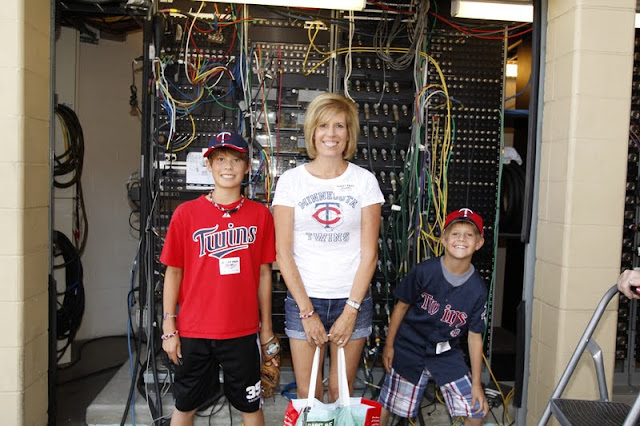 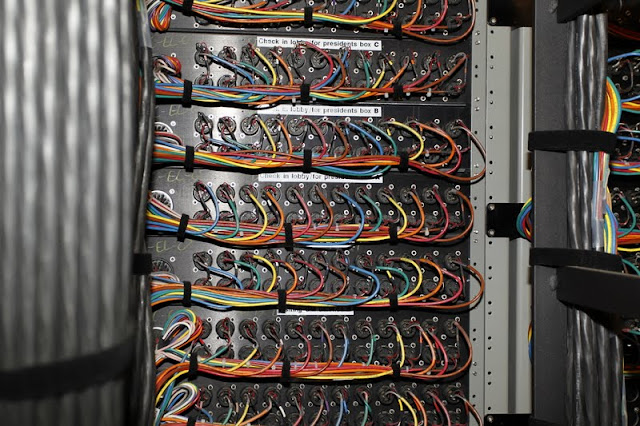 Even the piping for the ballpark beer was impressive. 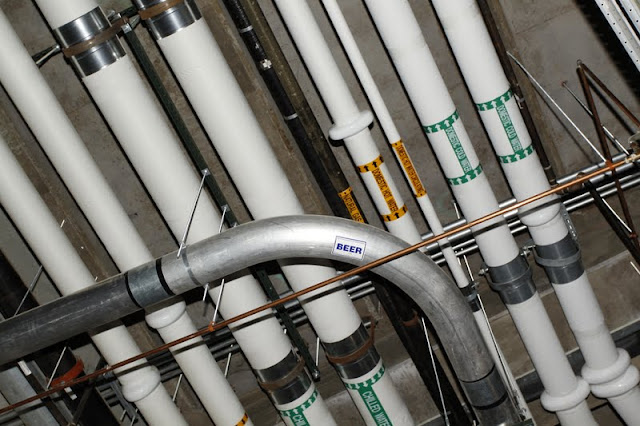 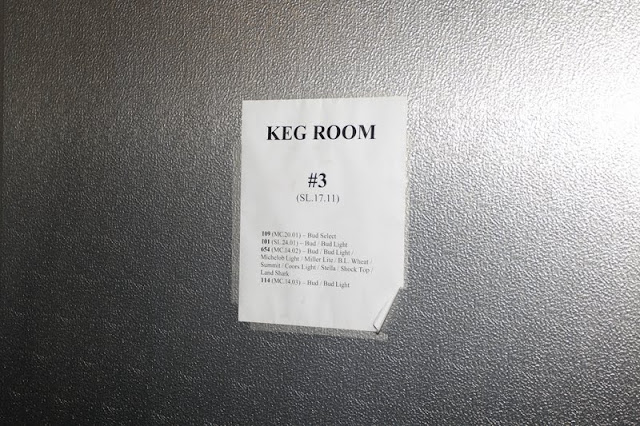 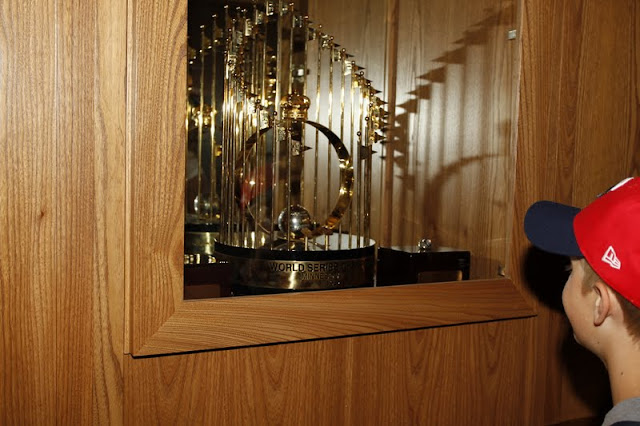 From the lounge and dining area of the Champions Club its another 10 steps to your seats and the field.  All of the food is included in the cost of your tickets... 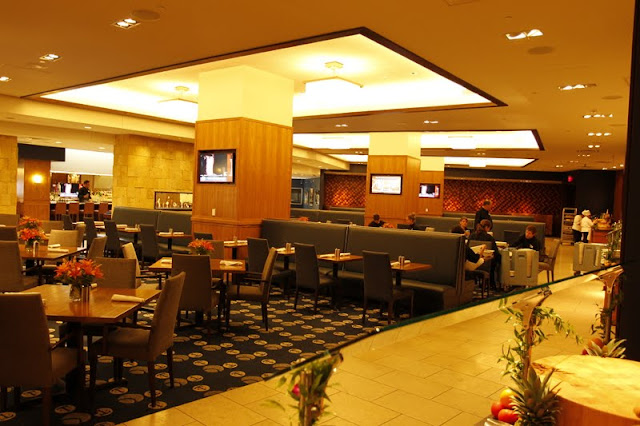 This is Tom, showing us the broadcast booth. 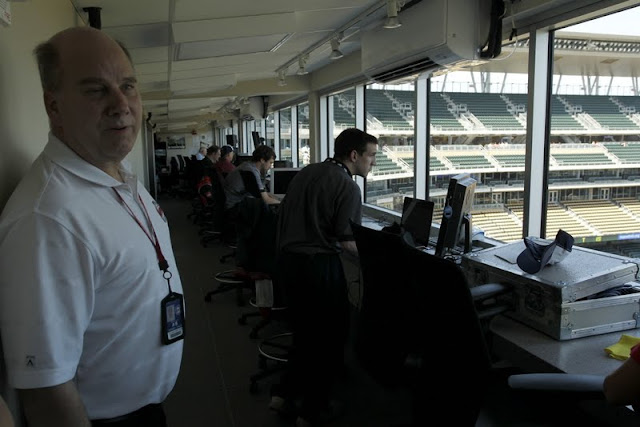 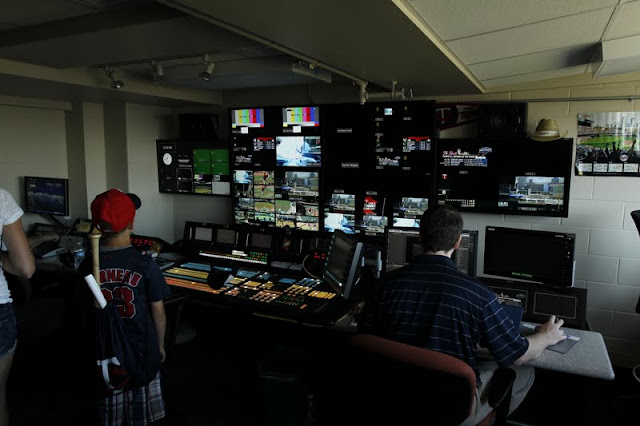 The two places we were not allowed, the locker room, and the dugout.  This was as close as we got to the dugout, but the boys were thrilled with getting a good look. 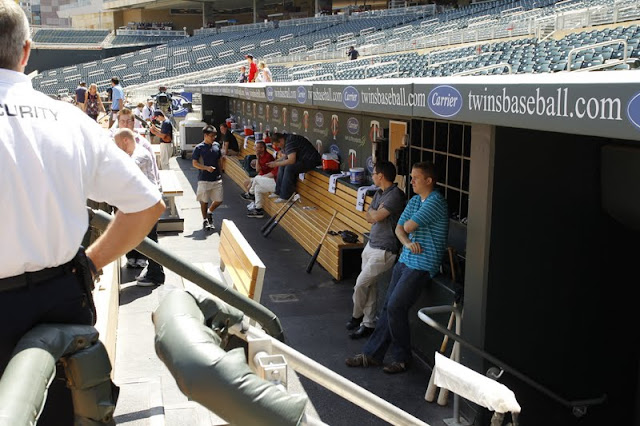 Since batting practice had started, the boys simply did not want to leave the field.  Each boy staked a claim at a railing just waiting for a ball to come their way. 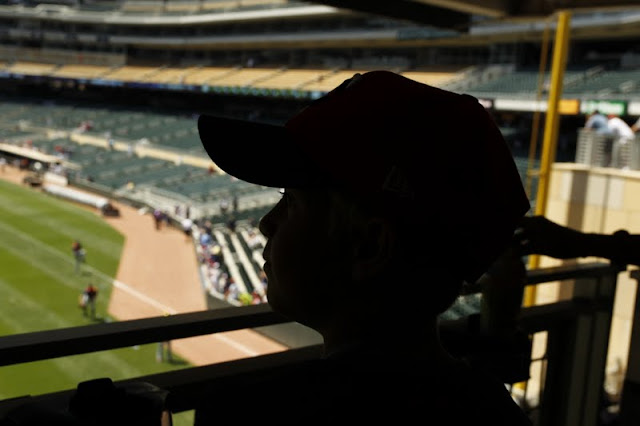 Nolan was taking so much in, he was actually quiet.   He didn't want to miss a thing. 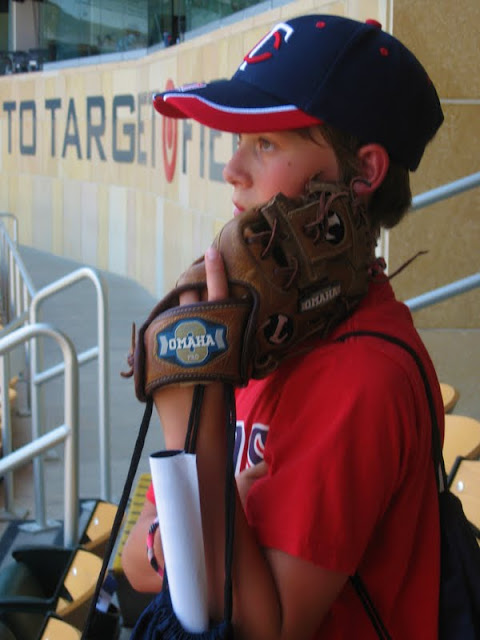 Our seats were directly behind home plate in the The Legends Club.  A few steps away from our seats was air conditioning and amazing food, more than just your ballpark standard food.  Even I was able to get a veggie wrap with goat cheese... so yummy. 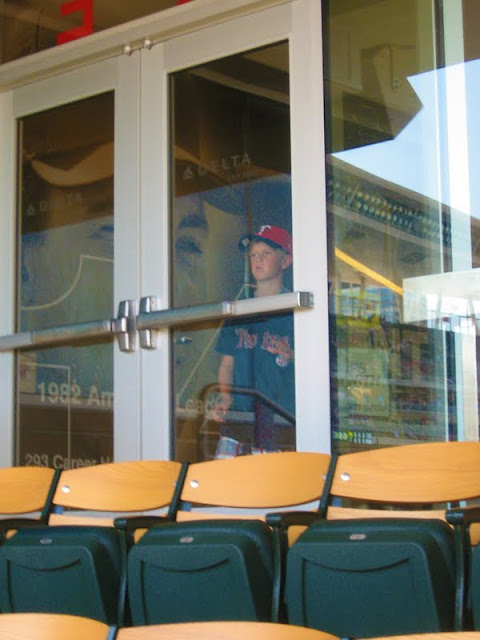 The view from our seats.  We even had waiters/waitresses for beverage orders, so we didn't have to leave our seats- cushy seats too, I have to say. 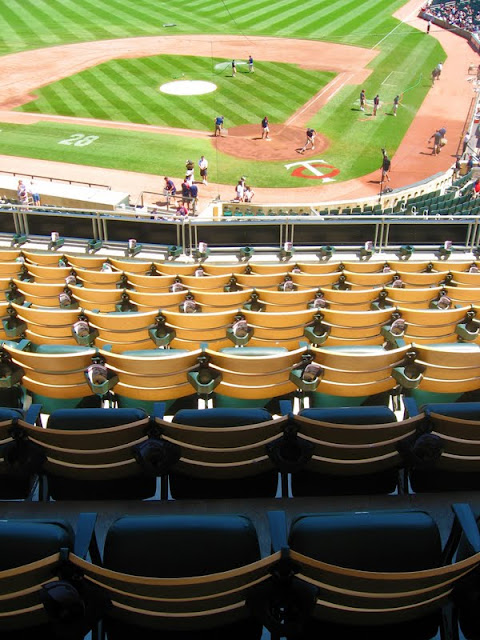 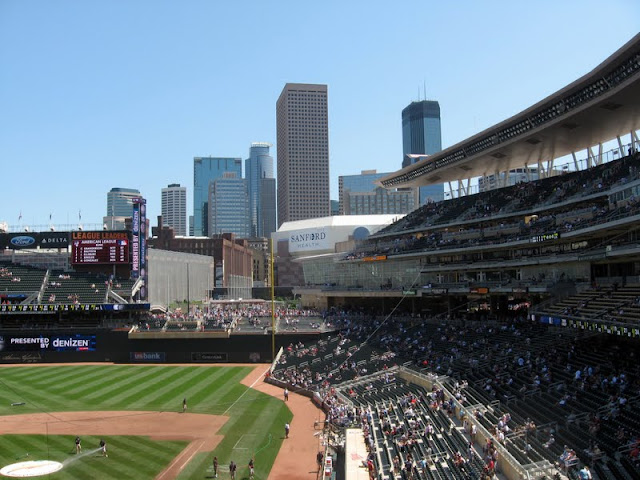 It was Colton who saw our names with a greeting flash across the scoreboard.  "Mom, look, thats us!"  "They know we're here!"  "How'd they know that?"  The innocence of being 9, and the wonder of it all...  from a mother's perspective, I love these childhood moments. 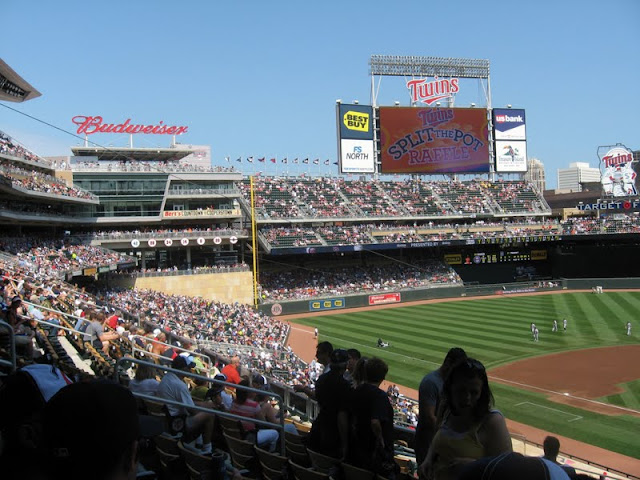 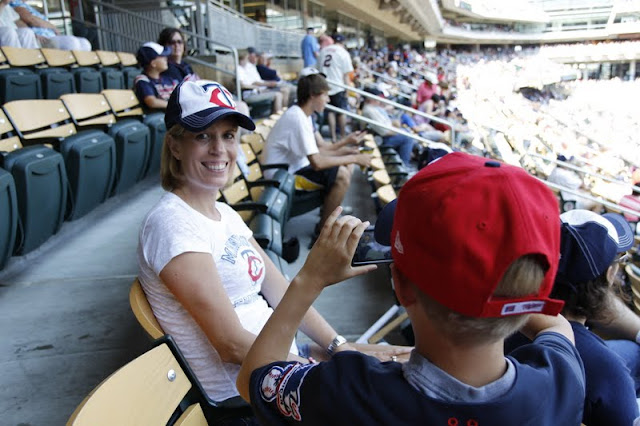 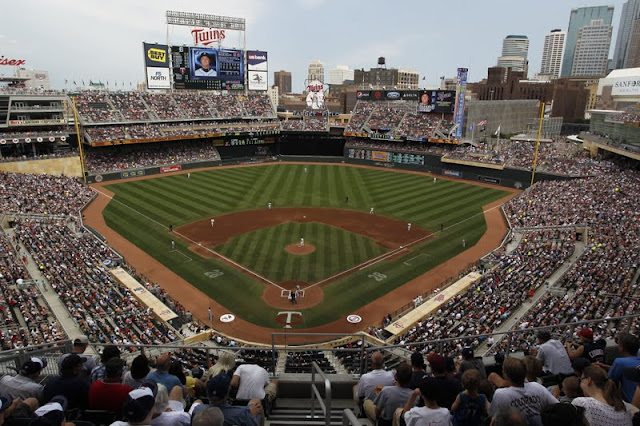 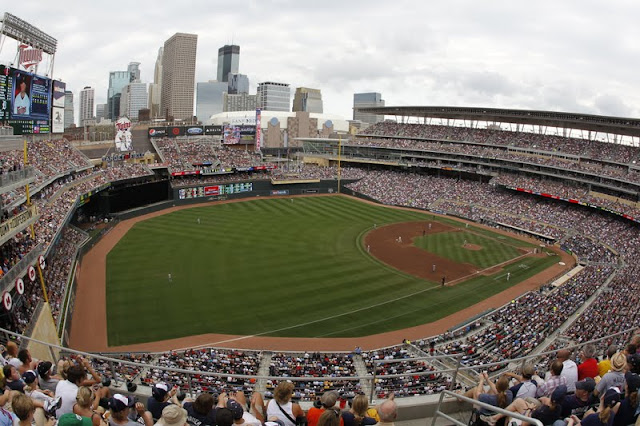 One final surprise came.  An usher calling out our name.  "Are you the Westra Family?"  She had a bag full of Twins goodies, from all of the Miller family who generously thought of every last detail. 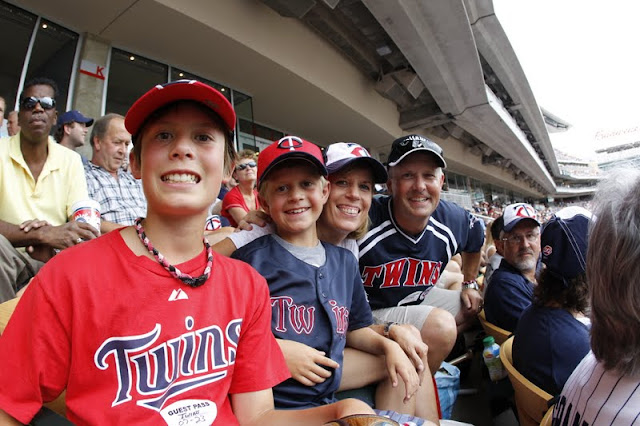 We even had an unplanned surprise at our hotel.  As we drove past the stadium on our way into town we saw the opposing team's (Detroit Tigers) bus parked outside.  As we sat waiting for Rick to check us into the hotel, the Detroit Tiger's buses pulled in ahead of us.  They were staying at our hotel!  Nolan was so enamored with the players.  He would hide his Twins cap and take a baseball around for them to sign.  They graciously signed his ball and he managed to get a lot of the player's autographs by the end of our stay.  We'd like to think we brought the Twins some luck... they won Saturday night, the only game in a four game series.
Our utmost thanks and appreciation goes to Chris, Katie, Caroline, Marty, Mike, and Tom, and perhaps a few people whom we don't even know, who created our unforgettable Twins weekend.
I can honestly say most days I have a hard time forgetting I am a woman living with breast cancer.  Last Saturday, the biggest gift I received, was forgetting about the cancer, and experiencing just how "alive" I really am.
Posted by Vicky at 11:14 AM