I hope its all I ever have, tiny regrets. This photo is one of those. Its the only year we didn't send out a Christmas photo or letter. It is the only semi-acceptable photo we got, but we couldn't get past the look of our oldest strangling his younger brother.

But its classic for who they are as brothers.  Even with scribbles over the top of it,  this photo has  become one of my favorites.  Nolan's love is big, fierce actually.  His hugs leave you breathless, and he won't let go until you hug him back equally hard.  And Colton has been the unwitting recipient of these overly exuberant hugs for years now.

It's Dakota's eyes in this one however that are the most telling. She is already panting, her sure-fire sign she wants to bolt from sight, and there is this pleading quality to her big brown eyes, "pleaassee can we be done before that boy wraps his arms around my neck too?" 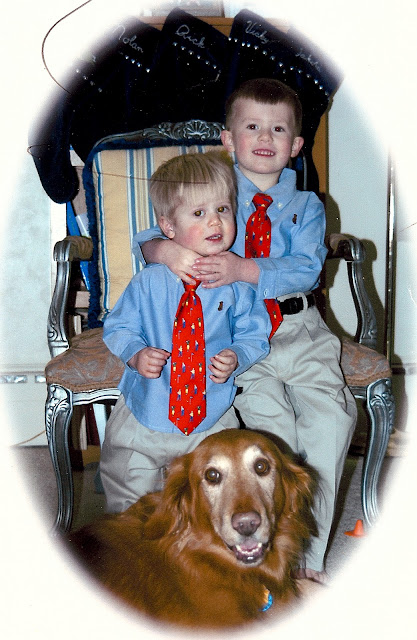 At some point Colton started to fight back.  They had epic battles of each one asserting their will over the other.  Separating them was our only respite.  But they're growing in their relationship. The harmony doesn't last long, but in the quiet moments, I witness it occasionally.

Last night in the car, Nolan was  having a heated discussion about his future hockey career. With 7 years of hockey under his belt now, I do think "career" is a valid term, even when you are only 10. So I overhear Nolan say "Maybe in high school I'll go and play at Shattock St. Mary's." Two things about this school, we're not catholic, and even though Sidney Crosby attended and played hockey there, we don't have 40 grand a year to throw into it.   So as we gently break it to him that we'd have to sell the house just for tuition, Colton chimes in with, "yeah Nolan, that wouldn't work, mom and dad could not just sell their house and come live with you."

At this point I am thinking to myself, ahhh, they are finally starting to grasp the concept of money, and the idea they will be independent of mom and dad one day. I look back to see Nolan nodding his head... "yeah Colton, you're right. Mom and dad could never come live in the dorm with me and all the guys... because..."

Colton is nodding in total agreement, as Nolan says... "it'd be too stinky." "Oh yeah," says Colton, still nodding, just what I was thinking, way too stinky with all of those hockey players, for mom and dad to live there."


Yeah, well okay, so maybe we still have some work to do on that "understanding" of the world. I'm just going to go with the fact, they were in total agreement with one another for 3.5 seconds. Sometimes you just settle for that.
Posted by Vicky at 12:25 PM