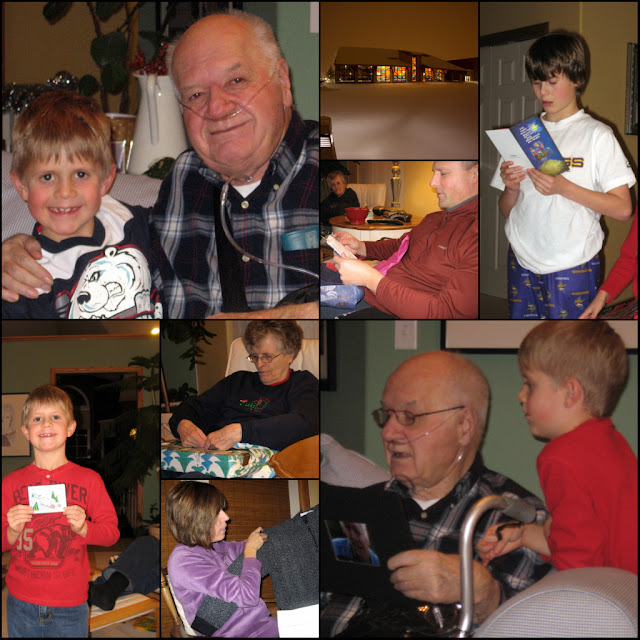 We had a joyful Christmas and felt so blessed we got to spend it with at least part of our family. With a big blizzard breathing down our necks we didn't venture too far from home. With the wind whipping the snow about and the roads slick and slippery in spots, Rick picked up mom and dad and brought them to our house Christmas Eve.

I enjoyed watching the boys get just as excited to see Grandpa and Grandma opening their gifts as the boys did opening their own gifts. I've spent a great deal of time making a photo book for my dad with all the pictures from his 80th Birthday party. I also edited a stack of photos for my mom from her retirement party and made some prints for her to scrapbook. I even saved my babysitting money and used it to buy some things for Rick, something I haven't been able to do in a long time.

My dad surprised us all with his own gifts for us. He wrote a card to the boys and enclosed it with a small check for them. He thanked them for all the little things they help him do and told them how much he loved spending time with them.

He also gave a card to Rick and I. But he shook his head when he we opened it and found only his words inside... as if to tell us his words weren't enough. No explanation was necessary. I know what limited "spending" money my dad has. He makes due with very little and yet he has never focused on what he lacks. So I shouldn't have been surprised when he told us what he had done instead of being able to give us money.

With what limited money he had, he decided to send some money to the pastor. He knew Pastor Craig helped people get a hot meal from time to time or helped them when they had a specific need. Dad wanted to contribute to helping Pastor Craig help others in need. He also sent a small amount to the women's circle at church. They have always sent cards and well wishes to him and prayed for him. He thought it was only prudent to help them be able to buy more cards to help others who might need some support.

Despite the fact we got a Wii for Christmas, and Nolan got a new hockey stick and Spud sweatshirt, and Colton got Star wars Legos and a Wii game, and many other generous gifs, its my father's words in a simple card that were one of the best gifts I received.

The other favorite gift I received that day was a visit from a friend. I need to seek her permission before I share about it, but either way, I'm noting for the record her visit really touched me and I am grateful.
Posted by Vicky at 12:05 AM