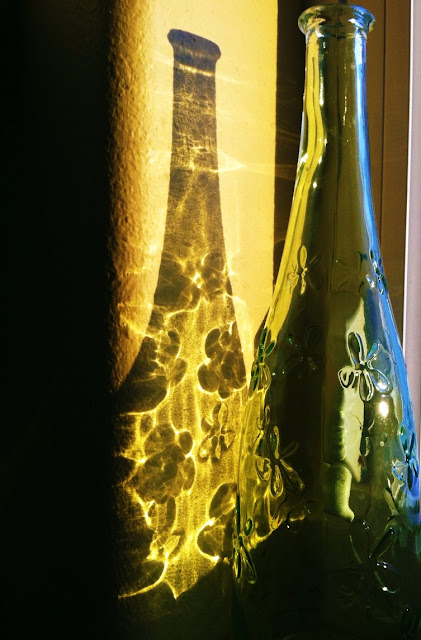 “When we walk to the edge of all the light we have and take a step into the darkness of the unknown, we must believe that one of two things will happen. There will be something solid for us to stand on or we will be taught to fly.” ― Patrick Overton

Two years ago, March 24th, 2011 I had my first PET scan.  It had been scheduled for an earlier date, but a storm had intervened and the truck carrying the dye for the scanner, could not get to town- so it was rescheduled.

We awoke yesterday with a huge ground blizzard in the works.  I couldn't help but feel a bit of deja-vu.  But nobody called from the clinic and at 1030 Rick, Colton and I headed off for the appointment.  Thank goodness for 4-wheel drive, steady hands on the steering wheel, and a firm resolve by all of us to get the scan completed.

The part of the scan that had me the most concerned was the injection of the dye.  I've had a serious reaction to CT scan dye and wondered how I would react to the PET scan dye.

But I think all of your prayers, helped everything run smoothly.  The tech knew me.  Her kids attend the same school as mine.  She was so warm and friendly, she put me at ease right away.  The dye isn't driven in any longer, it is now flown in and had arrived safely already.  She assured me nothing in the dye would cause me to react.

She also told me deep sedation was not necessary, as the scanner was a CT type scanner.  Instead of an enclosed tube, it was a big donut shape- that enabled my head to remain outside of the scanner until the last 3 minutes.  Whew.  Relief flooded me instantly.

She apologized at the first failed attempt to insert the iv needle.  As she set about trying to find another vein, my phone began buzzing. After a few buzzes she asked if I needed to check it and I assured her no- its all my prayer warriors reminding me I am not in this alone.  She smiled and said the power of prayer is awesome.  She also effortlessly guided the needle into a different vein and this time it worked. We chuckled as my phone went off a few more times.

I rested under warm blankets and reclined in the chair waiting for the dye to be taken up by my body.
The scan itself went by fairly quickly.  I was only mildly sedated and used the quiet time to meditate and pray.

The only surprise was when I opened my eyes and a new tech was helping me up from the table.  He simply handed me my things and said it would be a few days and then my doctor would call me.  I had wanted to thank the first tech, but I assume she was busy getting the next patient ready for the scanner.

Actually, there was one more surprise- my craving for a hamburger afterwards.  I was somewhat groggy- and still find it hard to believe I asked for McDonalds.

I arrived safely at home, crawled in bed, and let my mind ride with the incessant buzzing of my phone, as I drifted off to sleep for the night.

Rick continues to recover from the flu.  He has been plagued by headaches and achy joints and wears out easily.  He told me maybe he got the flu to help him fully appreciate everything I go through with treatment.

On the flip side I'm embracing my superwoman powers as I tackle the care giving role on top of parenting.  I've shoveled snow, driven boys to lots of hockey games, hauled goalie gear in and out of the rinks, helped rescue the dog trapped under the deck, and haven't felt more revitalized and capable in a long time.

I haven't been able to respond as quickly to email, and blog comments and texts.  But I assure you I have read every single one and have been encouraged and blessed by each of you!