Thursday night we headed out to the Scheels Arena for the beginning of the "legendary" Squirt International tournament. The Fargo Squirt International Hockey Tournament draws 128 teams at the Squirt A and B levels to the Fargo - Moorhead area from across the United States and Canada for a 3-day Tournament. According to their website, the tournament "Started in 1985 as an 8 team local tournament and has since grown in stature and reputation across the country to be know as the "Worlds Greatest Squirt Hockey Tournament." This was Colton's first year of playing in the tournament and he hardly slept the night before. 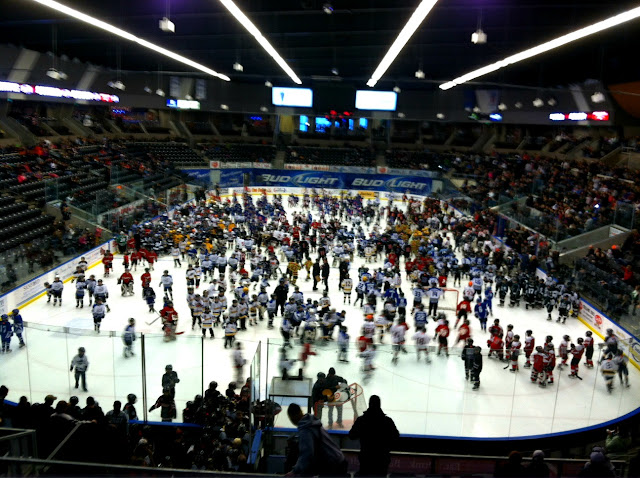 They begin the night with a group photo that doesn't seem possible- but every year it usually makes the front page of the newspaper. We watched a few of the relay races for the "squirt olympics," and then Colton wanted to get some rest for his games the next day.  We were facing a team from Colorado and had no idea what to expect. 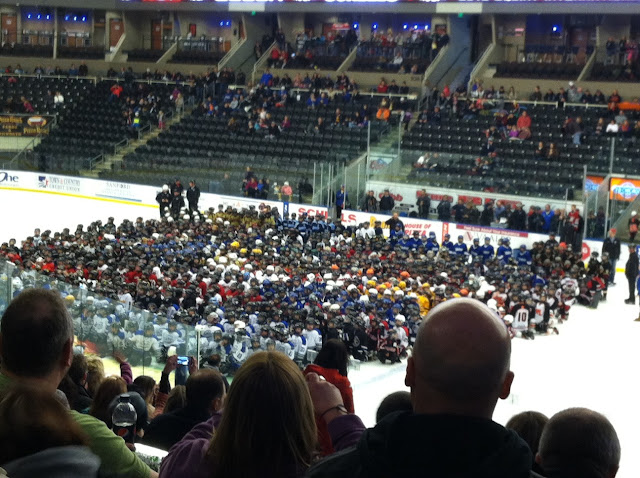 It was a beautifully frosty morning as we started our treks out in search of all the rinks we'd be playing at.  The sun has peeked through a few days and the temps are feeling warmer. 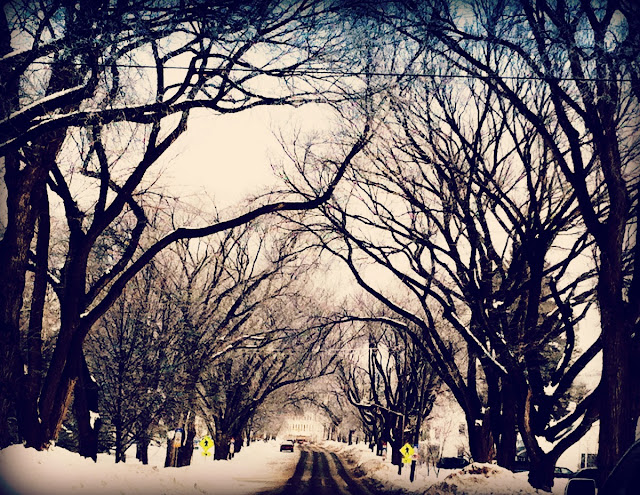 With the distraction of such a fun event for the boys, we tried to leave cancer world on hold and immerse ourselves on the rapidly ending hockey season.

But I thought this was fitting Friday night... right on- indeed new things are on the horizon and taking a chance is something I have to get ready to embrace. 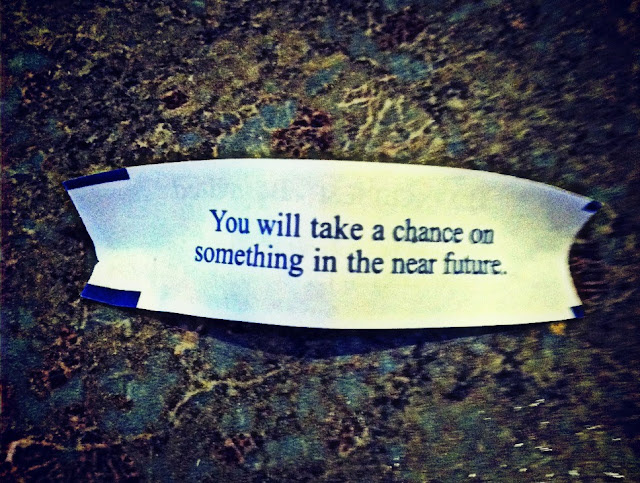 Siblings of players have hours to amuse themselves at the rink.  These two cuties crawled under a table to trade pins and play games. 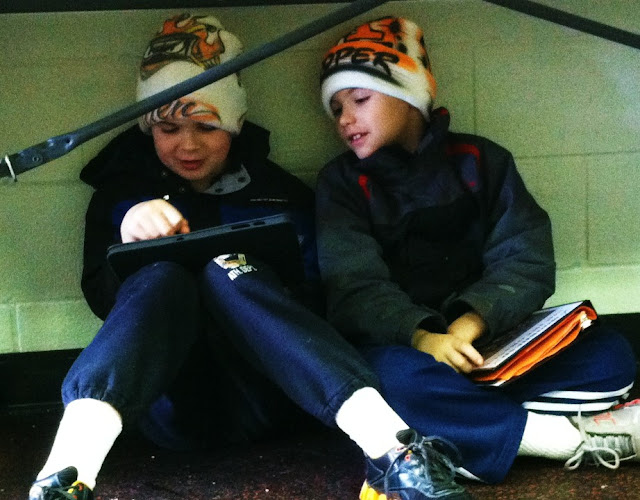 It seemed fitting that we would play a Fargo team at the iconic Sunmart rink.  An old warehouse was converted into an ice rink.  The ice is smaller than we are used to, the rafters are low, the smell is rather distinctively unappealing and non-hockey-like.  And there are religious sayings all over the walls.  And yet, we have fond memories of having played in that old barn. 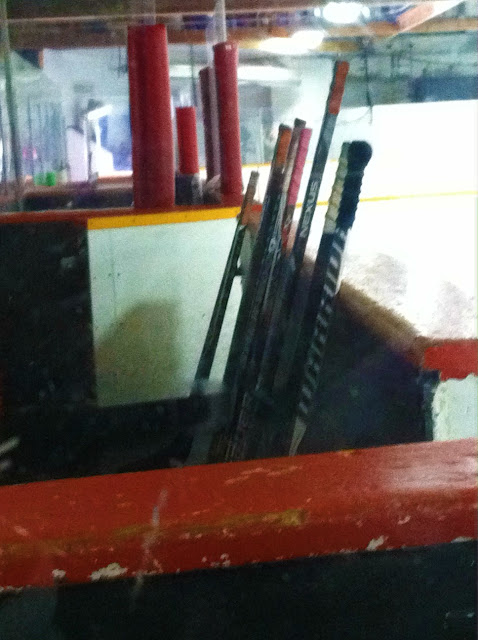 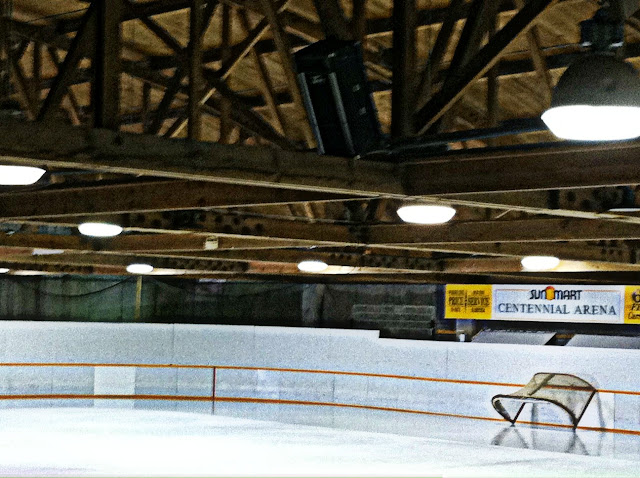 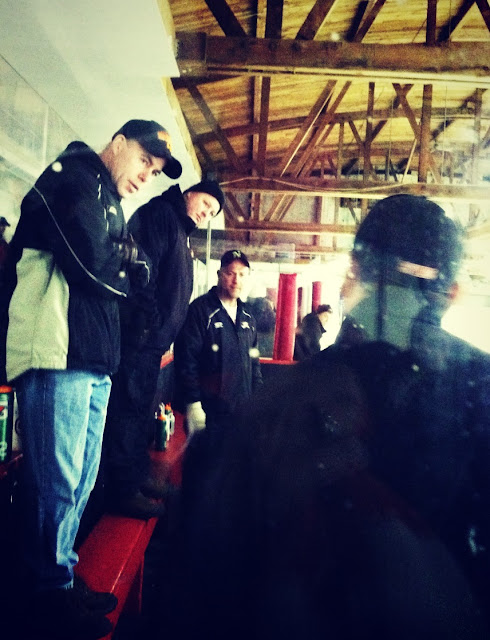 I would say parents and kids alike found a lot to get excited about.  Lots of vendors come and set up their hockey wares.  These spray painted hats are hugely popular.  Colton saved his money and had this hat made Friday night.  They can choose from pages of emblems to have put on the front and back of the hat.  Colton chose front the orange M for Moorhead with hockey sticks for the front, but it was the back that left me with a huge grin.. 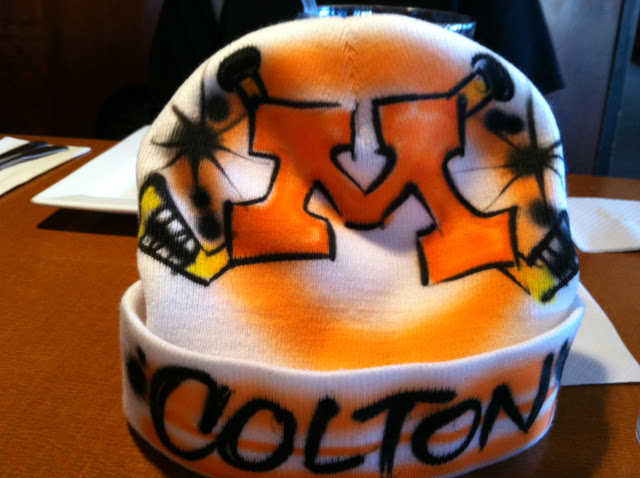 The Pink breast cancer ribbon wrapped around hockey sticks chosen by my son... but 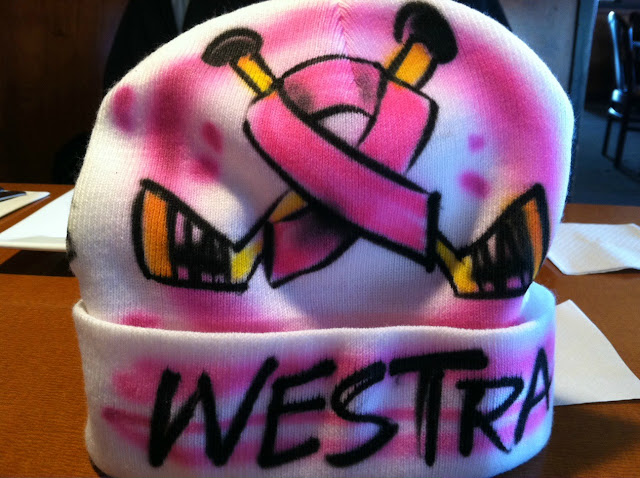 not just my son... half the team decided on getting the ribbon on their hats and I suspect this cute kid had something to do with it.  Jackson has been in Colton's class since 2nd grade.  He wears "Fight Like a Girl" shirts in my honor, as well as other pink ribbon items.  He gets the biggest grin on his face when he tells me- "its for you Vicky!"  Gosh I love that kid!! 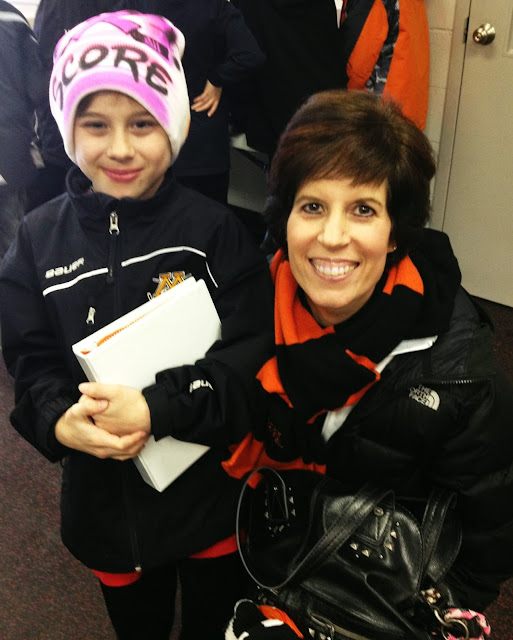 Our last game of the tournament was yesterday.  Colton is below getting his participation medal.  We were vying for third place in our bracket, but lost this final game. 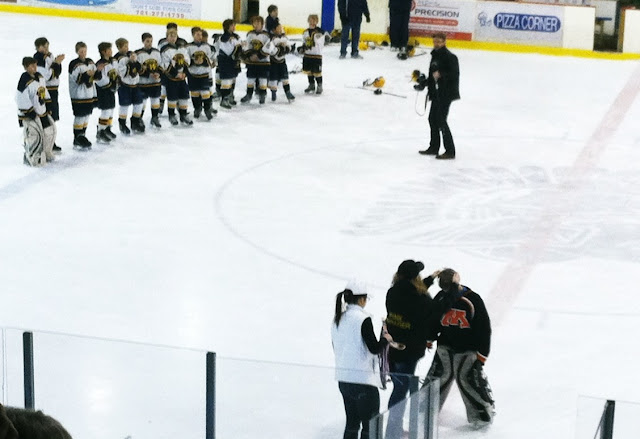 I don't know what I did to my arm Friday. I just know I fell asleep on my arm Friday night and woke up yelping in pain the middle of the night. My arm was swollen and it felt like I had a hundred bees stinging me from the inside.  It also felt like I had an internal sunburn.  I went straight for pain meds and after a couple of hours it subsided.

But Saturday morning it quickly began to throb again.  I used hockey for distraction but yielded to pain meds early Saturday night.  Lots of pain meds and a serious thought of having to go to the er.

The lypmh node, swollen now- in all likelihood, with cancer, impinges on a nerve that runs down the inside of my arm.  When that nerve gets pinched- its one of the most gut- wrenching pains I've ever felt.

I stayed home from the Saturday night game.  And I begged Rick not to leave me Sunday and take Nolan out of town.  I was prepared to go to the er for help.

Miraculously, the pain subsided Sunday morning.  I was able to use Advil the rest of the day and detox from the Oxy- yuck- that stuff works but sure makes the rest of me feel horrible.

I have infusion tomorrow for herceptin, and then 1 week from tomorrow I will see Dr. P.  I've moved past the not knowing.  We have a big last week of hockey and I am going to enjoy it as much as I can.

Thank you all for your continued prayers!  I think they work in so many ways, in so many days~ I am deeply humbled.