Squirt International and the Hornet's nest...

Hockey is a game filled with cycles.  Sometimes the disappointments stack up to a staggering amount.  And because of these low points?  The highs are truly worth celebrating!

What an intense, emotion filled, exciting and fun hockey weekend we all had.  We had no expectation of how we might do this weekend.  We were one in a field of 64 teams from across the country.  We knew we were in one of the toughest brackets and would face stiff competition.  So we tried to instill as much confidence in our kids as possible.

But we started off the day early Friday morning with the news that one of our players, had a fever of 102 and would not be able to play.  We only have 14 players on our team to begin with, so we would be playing short right off the start.  Fortunately, our kids had some jump in their stride and didn't miss a beat even with messed up line rotations.  We beat St. Paul, 5-2.  Our next game was at 2 at the Scheels arena against another Minnesota team, Mankato. Amazing facility and fun to see our kids play in such an exceptional venue. 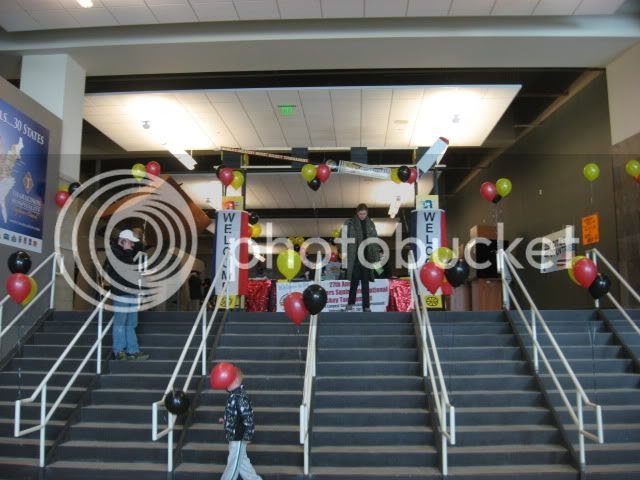 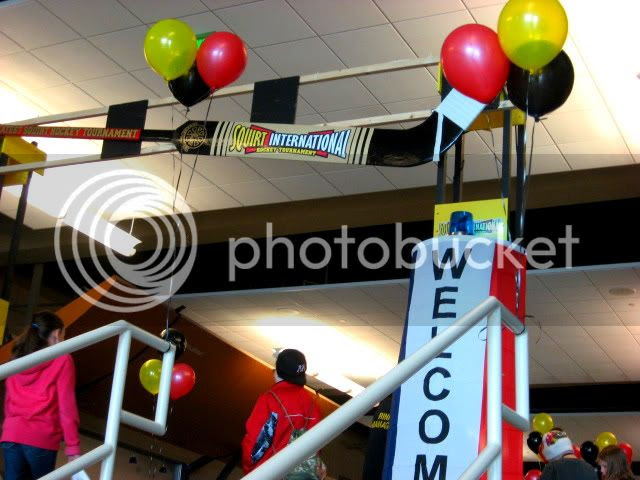 The team didn't pose near the problem the "big" ice did for our kids.  They played a close gut wrenching game and managed to come away with a 2-1 win.  Whew.  We were just happy to get out of that game.
It was later that night that we discovered our two wins had put us in the Championship bracket!
Nolan almost scoring against Mankato...

The puck is under the goalie stick on the goal line...

Great save by our goalie to keep us in the game... one of many he would make!  See the puck tucked inside his leg pad by his skate? 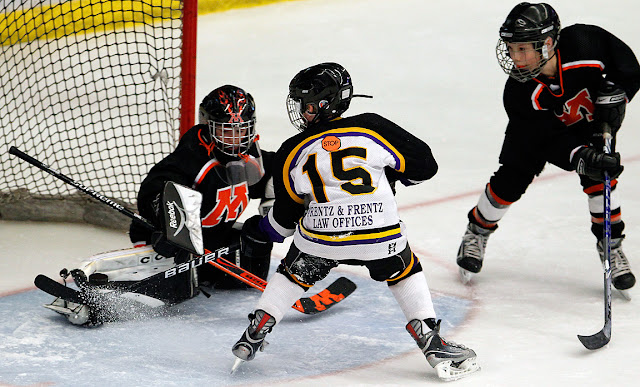 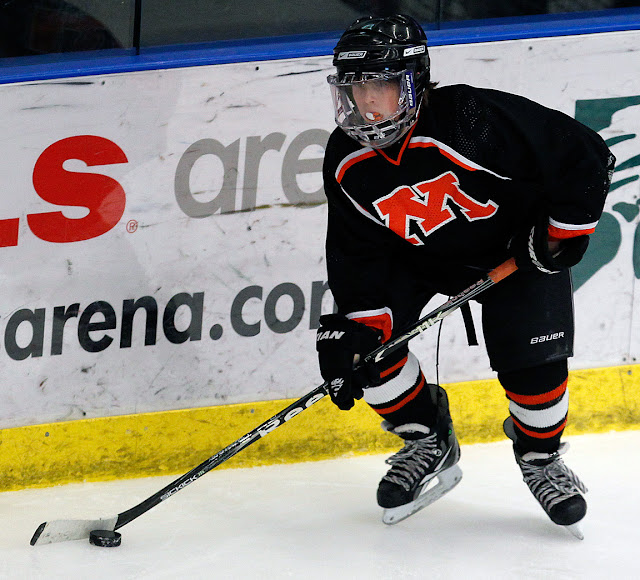 Our next game was an early 7 am game against... (insert ominous sounding music here) Eden Prairie- the defending Squirt International Champions!!  Oh boy, how would we do?  I was so excited and nervous I couldn't shoot a single picture.
We got an early lead, but they quickly answered to tie the game.  Then before we knew it, they had scored 2 more goals and suddenly we were down 3-1.  My gut was in a knot!  The goals had been weak and one of our players was hurt during one of them.  Now we are skating two players short.
And here is where I crossed over into being a total Hockey Mom... I went and yelled, screamed, jumped up and down and tried to boost the kids.  I wasn't alone.  We told them they could do it, we told them to keep working and not get down on themselves... and they scored, and the crowd exploded.  When we scored the third time, tying the game up at 3, we pounded the glass and yelled some more.
We were headed into overtime!  I can't even in my mind tell you when.  But as I stood watching, we peppered the goalie with shots.  He saved it once, then gave up a rebound.  Another shot, another rebound and then I look to see Nolan in the corner reach with his stick and ...
HE SCORES!!
Nolan received a special medal and NeckLace for scoring the winning goal. 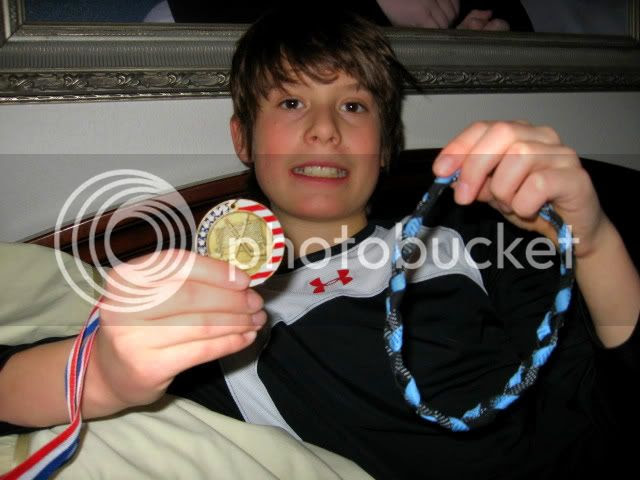 Parker won the other medal for his hustle in the game... 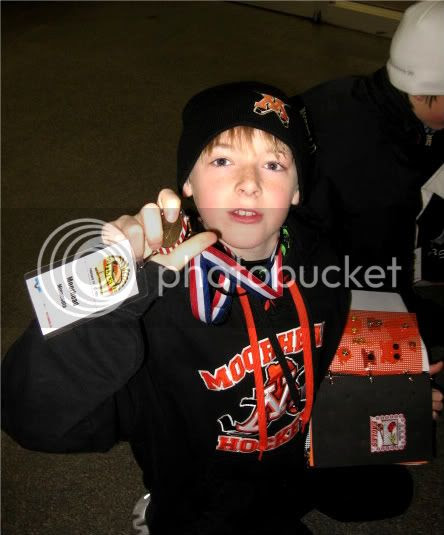 And then we got down to the serious business of trading pins! 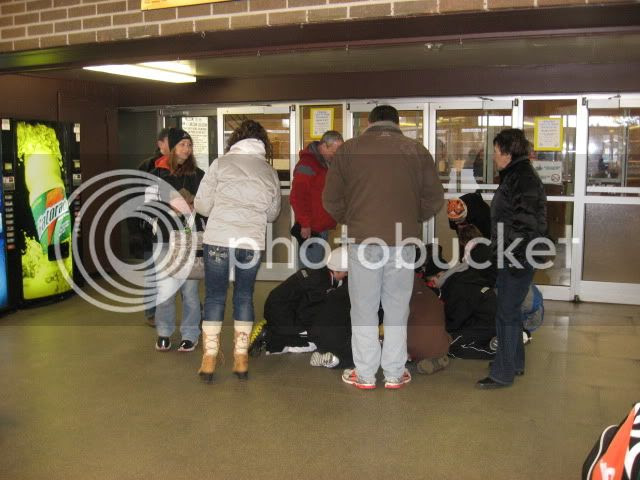 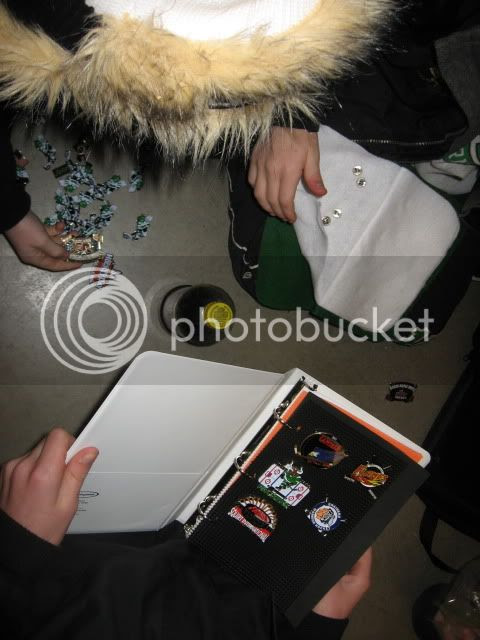 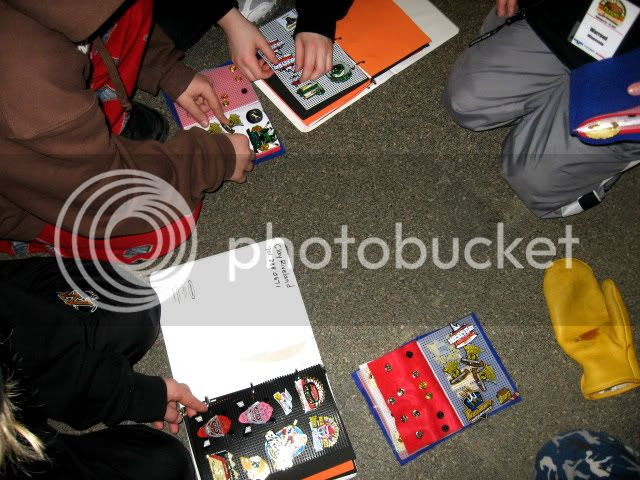 But we didn't stay long... we had another game to play... and it wasn't going to be an easy one, we had earned a one way ticket straight into the heart of the Hornet's nest, otherwise known as Edina.  Edina has quite the reputation.  Edina happens to have a 30-0 record having not lost a game all season.  In fact their scores were all 10-0, 18-0, 13-0, etc.  Nobody could come close.
So we brought all the team spirit and pride we could muster.  The texts and fb messages went out to our hockey loving friends.  We filled the rink with black, orange and white.  We donned hockey jerseys and prepared for battle... and 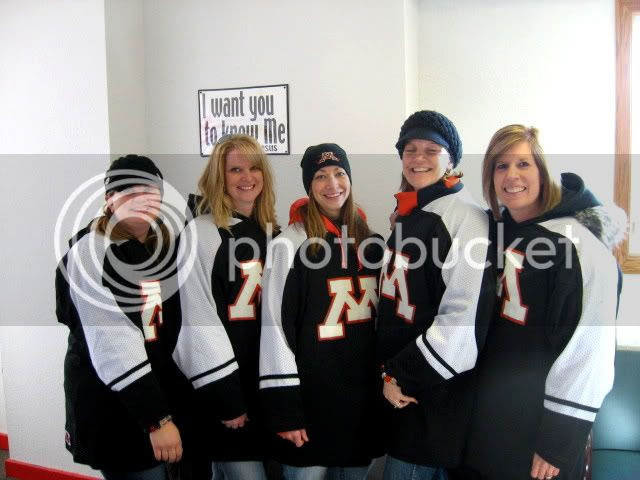 we got killed- just like everyone said we would.  They were amazing.  We are still asking ourselves, "What was that we all witnessed?"  They won easily, 12-0... but nobody could feel all that bad.
We were still 3 and 1 and in the top 8 of 64 teams!  To our knowledge its one of the highest finishes of a Moorhead team in the recent past.
Sunday morning we played Eagan for our final game.  While we looked a little tired and took a lot of penalties, we won the game 5-1 and finished our year with great pride.  We ended up in the top five tied with several other teams- but we'll take it.
Way to go Moorhead Squirt A's!!! 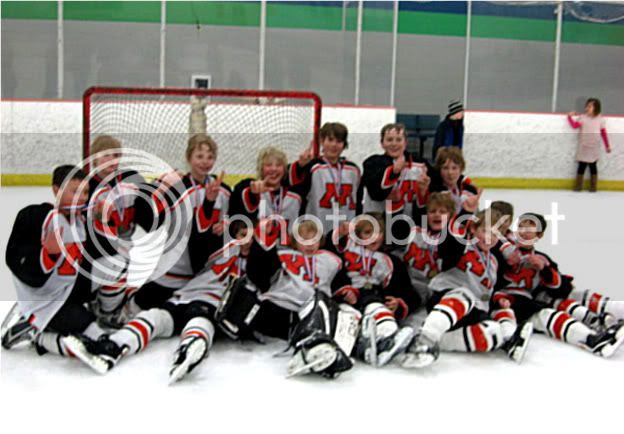 Nolan receiving his medal at the end of the game. 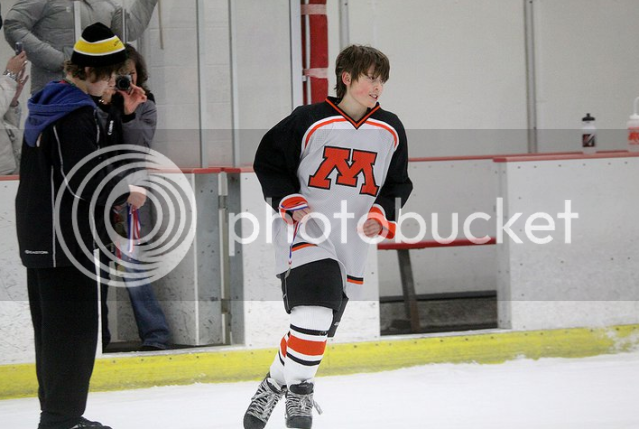 The last official shot of jersey #25. 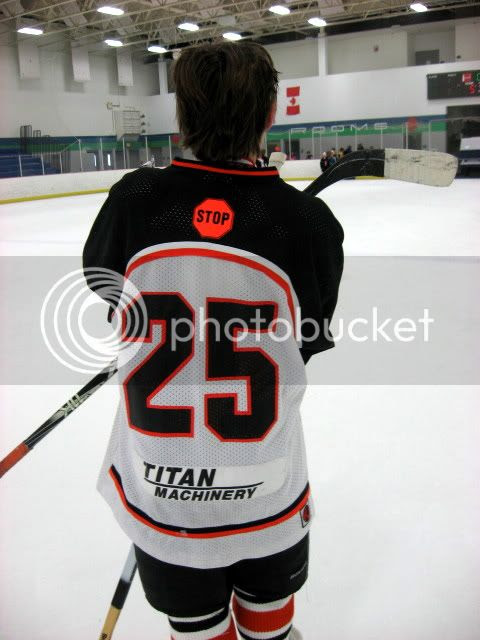 One more week and then Nolan will officially be a Peewee.  Checking school- here we come! 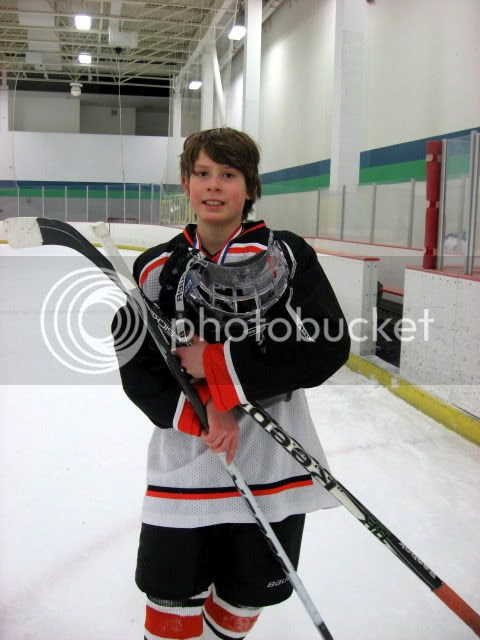 Our coaches who worked tirelessly with our boys, encouraging them, instructing them, and helping instill character in them.  Well done! We can't thank you enough for all you do... 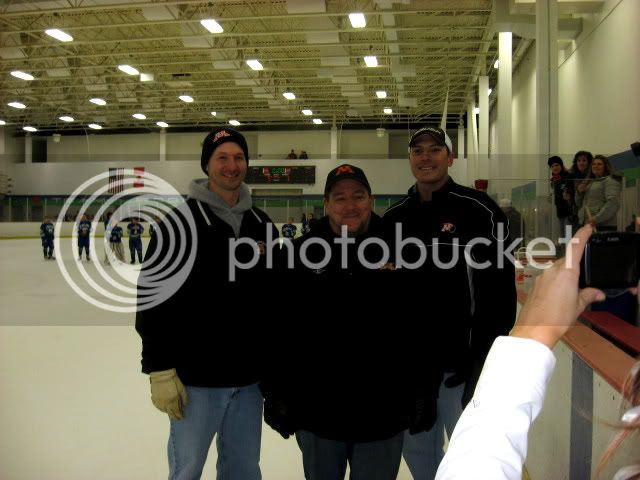 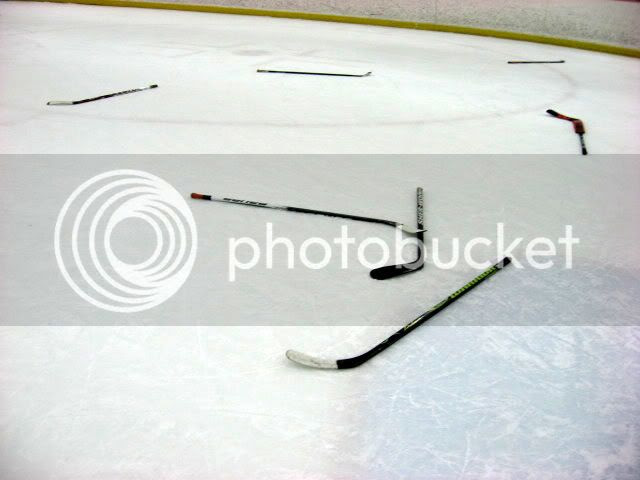 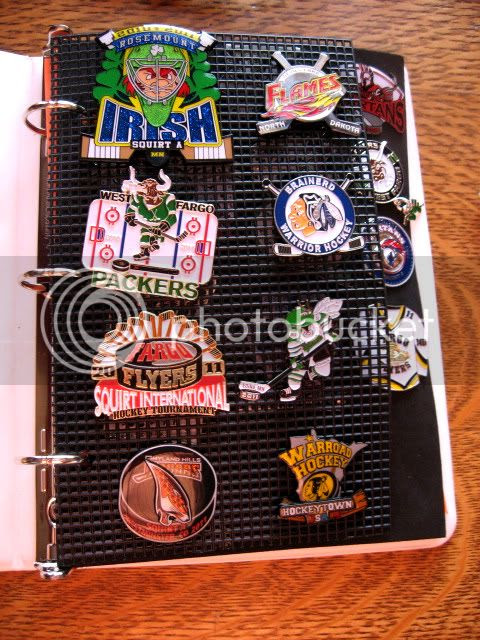 The pins of the teams we beat, and the only one we lost to... 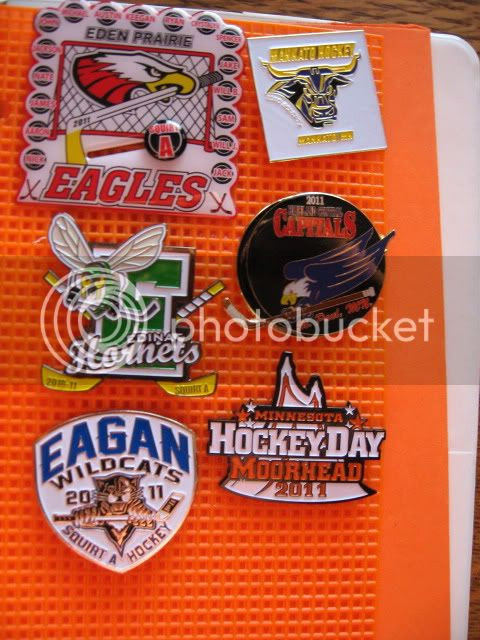 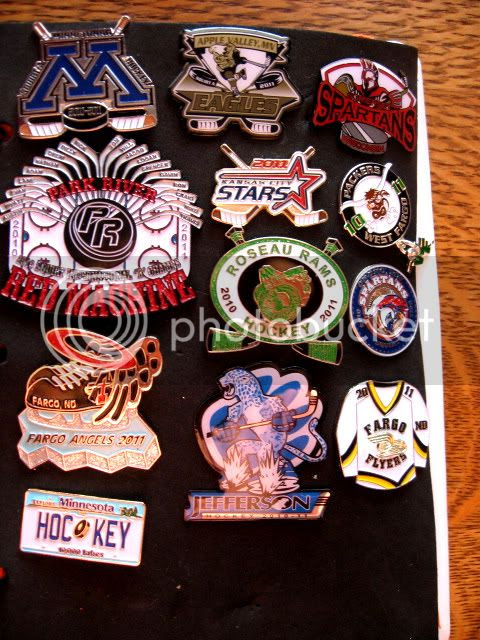 So proud to see our name amongst all the top teams! 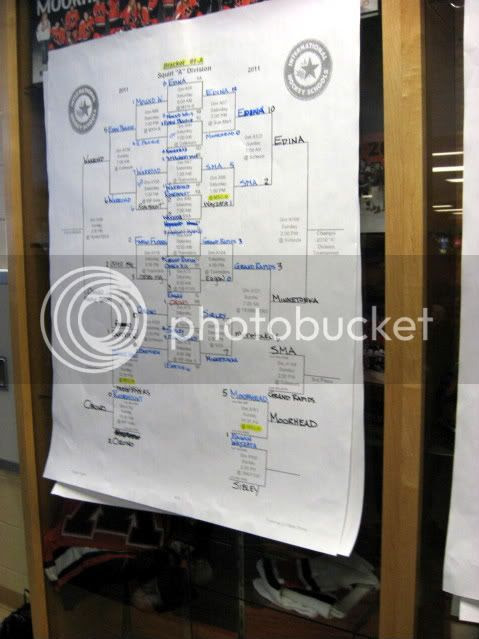 We of course went to the championship game at the Scheels Arena. 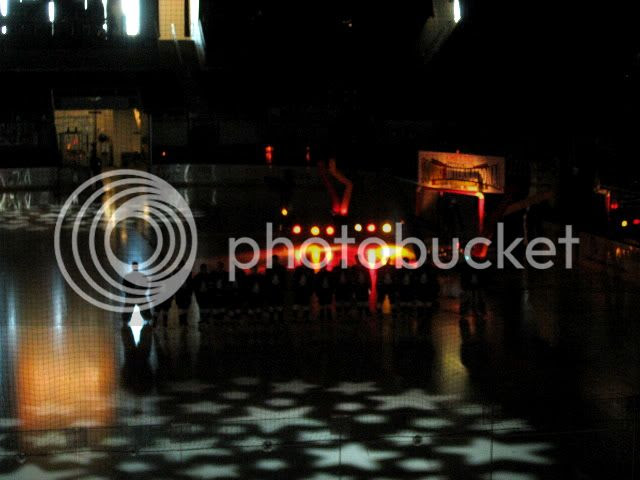 Ironically, the other team facing Edina for the championship was Minnetonka... the team we beat earlier in the season.  Oh what could have been... smiles...
Edina won, 7-0.  Its the 6th time they have won the championship.  But thats okay.  We're only Squirts.  Edina, we'll see you at the State tournament when we are in high school- we're coming for you! 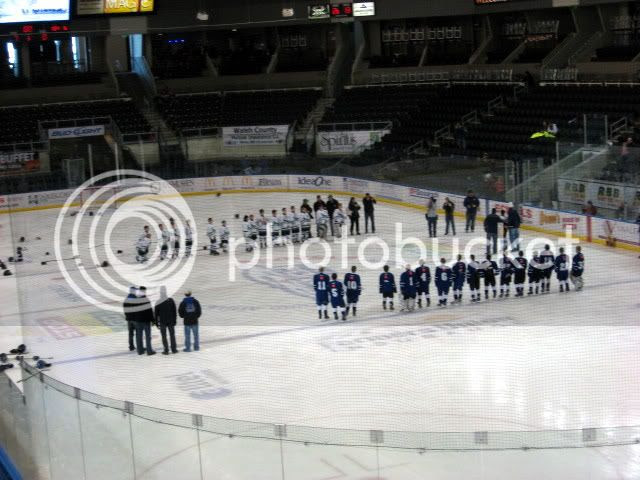