By all accounts, Hockey Day Minnesota 2011, hosted by our hockey community of Moorhead Minnesota, was a HUGE success.  The sun shone brightly and made it warm for the fans enjoying a full day of outdoor hockey.  But the warmth created a challenge for the players trying to play on ice that was a sloppy, mushy mess.

This is the official game program that my hubby and his uber talented graphic designer, Jena, created for the day.  Between her eye for design, and Rick's photos, I have to brag on them and say they created a beautiful commemorative piece.

My job was to sift through the boxes, and boxes of history and memorabilia to piece together a comprehensive story of the history of hockey in Moorhead.  It took numerous hours, lots of editing and piecing time lines together, and the use of my good friend google when I got stuck.

We arrived at the rink early Saturday morning.

Colton's team was the first to take the ice at 8:00 am.  It was chilly and we had to break out the hand warmers, but the air was electric with excitement for the events of the day.

Rick took these photos of Colton and his team in dark blue. 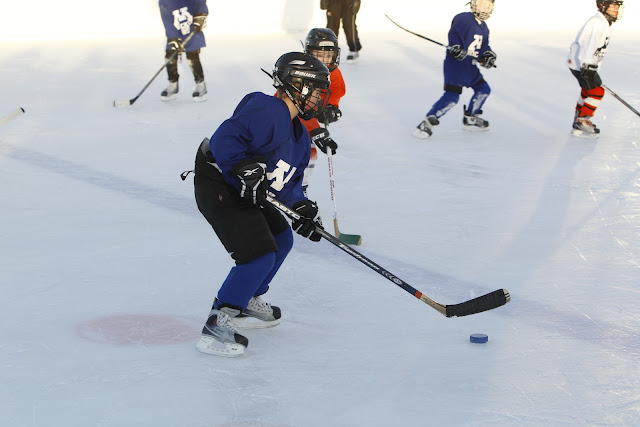 Colton with the puck... 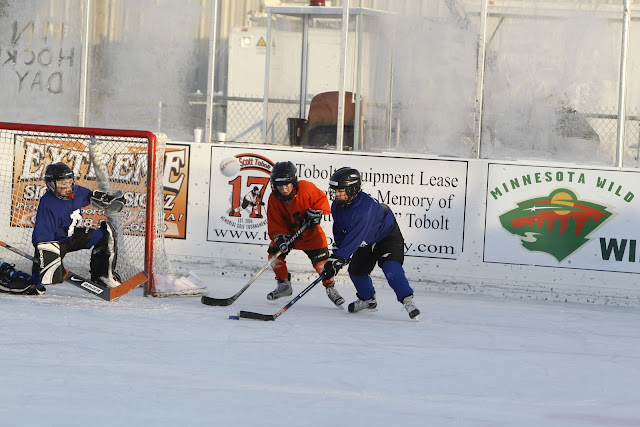 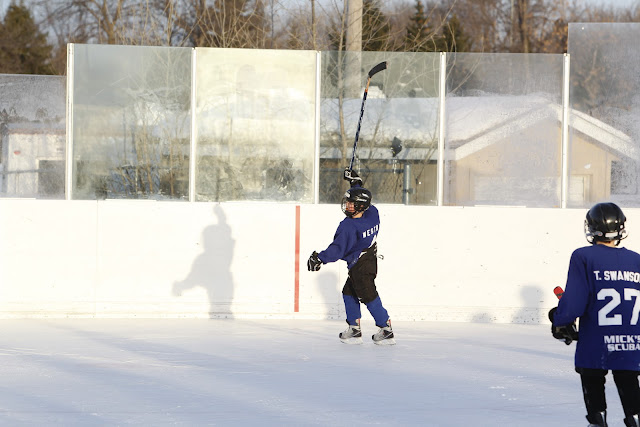 At first I thought this was a replica of the rink- but duh, no, its a cake!

Governor of Minnesota, Mark Dayton, with the ceremonial puck drop for the face-off.

Science lesson for you- did you know that ice painted blue melts faster than red or plain ice?  It wreaked much havoc around the goalie crease, and the blue line.  Co2 was brought out to try and "freeze" it but by this time not much could be done.

Our high school team, the Spuds, ranked number 15 were playing, Hill Murray, the number 1 ranked team in the state of Minnesota currently.  We were very pleased with how evenly the teams played, even though we lost 3-2.
We were so honored as a community to have been chosen to host this annual event in only its 5th year.    After taking in the whole experience you realize that your one piece in the puzzle, was just a fraction of the huge collaborative effort it took to make the day a great success.  It took thousands of volunteer hours, and hundreds of volunteers to make this day such a success, and we all felt really lucky to be a part of it.
Posted by Vicky at 2:22 PM