He was sitting at the computer the other day engrossed in a game.  I almost didn't notice.  But then, appearing out from underneath his chair, was a splash of pink.  I had taken my fuzzy pink socks off by the computer late the night before, and he had put them on while he was sitting there.  The tough kid, hockey player, was wearing pink fuzzy socks.

I saw the moment and wanted to capture it.  How many more times will my 10 year old even dare to wear my pink socks?  But he is savvy now, and on to my motives.  He has been blog fodder one too many times apparently.  He tucked his feet underneath him when he saw the camera, and when I still wouldn't go away, he took off the socks and threw them down.  "Mom, I don't want to see pink socks on your blog."

He is growing up.

I guess that is why they are called "tweens."  Not quite a teenager, (thankfully), but not really "little boy" anymore either.  He came home from hockey practice with lots of instructions from his coach about his tournament this weekend.  He quickly set about getting dress shirts, khakis and shoes all ready to go.  Its  the first time he has had to dress up for hockey like the older boys, and the importance of the tourney is not lost on him.  He then gathered shampoo, body wash and deodorant (thankfully, this one is not optional these days.) 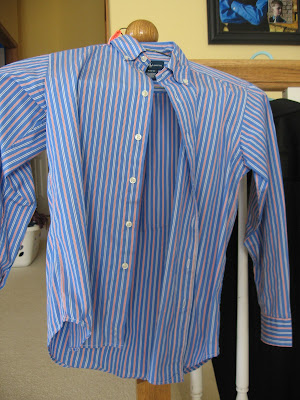 He remembered t-shirts, sweats and his favorite boxers.  He must be preparing for an epic floor hockey tourney as he packed 6 shortened sticks.  Sniff, sniff... so mature.  I didn't have to remind him of a thing.  He didn't need my help, or ask for it.

But I smiled when I saw the rest of what was under his clothes.   Hidden underneath the sticks and his clothes, was a pile of his favorite stuffed animals.  Whew.  He is at least a fraction of a little boy still.  I'll take what I can get. 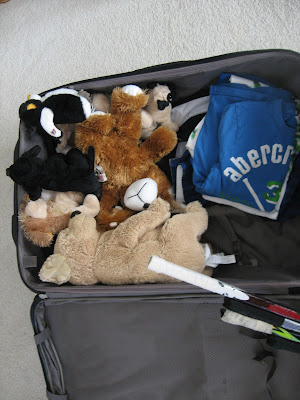