“One must sow love to reap love. But only by daily cultivation will the harvest be abundant.” — Unknown

I had to call dad tonight to check one of my facts for this post. I think the proof of a really good party, is in how many times it gets retold. This was my third retelling so far. He is still reveling in each moment, each joke, and each memory. He has been reading his cards daily and soaking in the words.

This, at last, is a glimpse of his party.

The scrumptious cake was just what dad ordered, white cake with a raspberry filling inside. We demolished the entire thing. 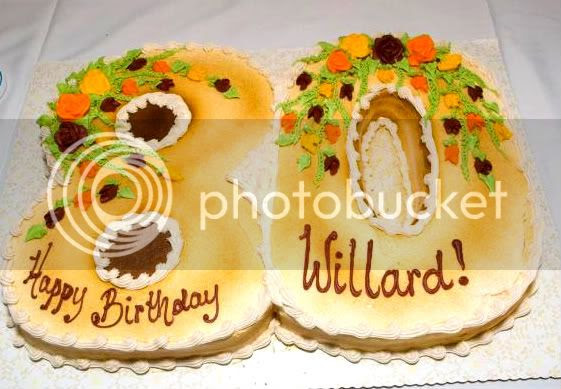 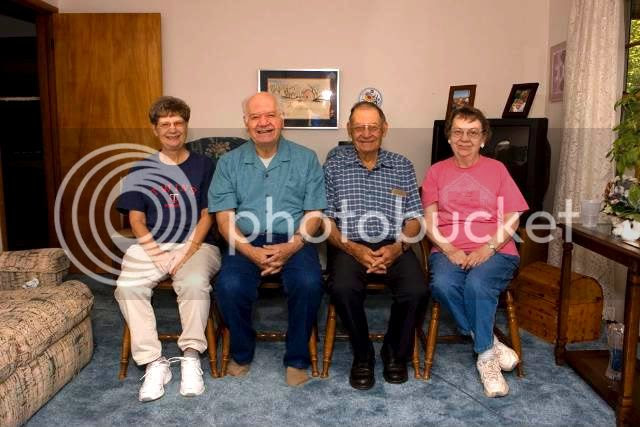 A party before "The Party" evolved into a large gathering of cousins, second cousins, aunts and uncles and some friends. My mom graciously hosted everyone at her house. 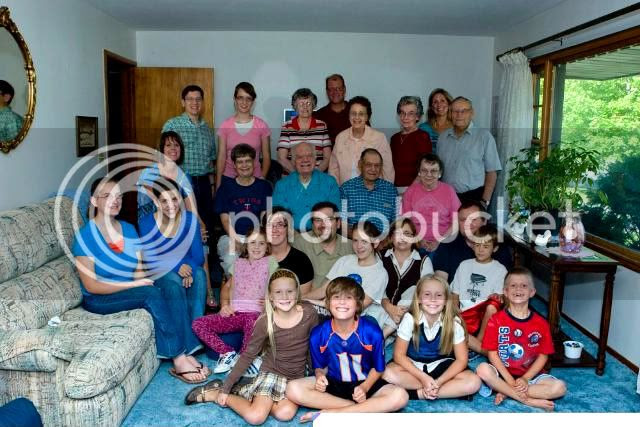 My brother's daughter, Madison. They flew in from Hershey, PA. And yes, its THAT Hershey and they brought lots of chocolate! 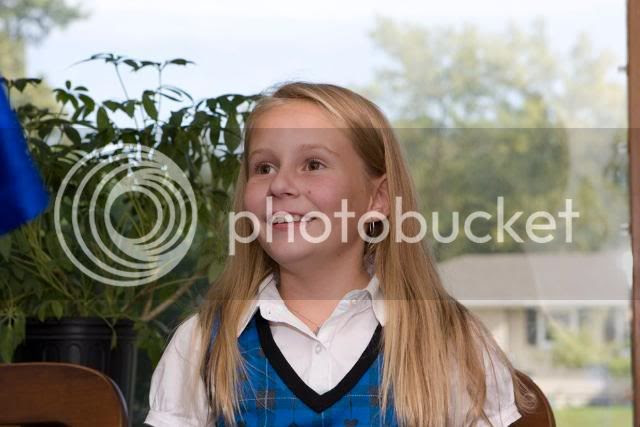 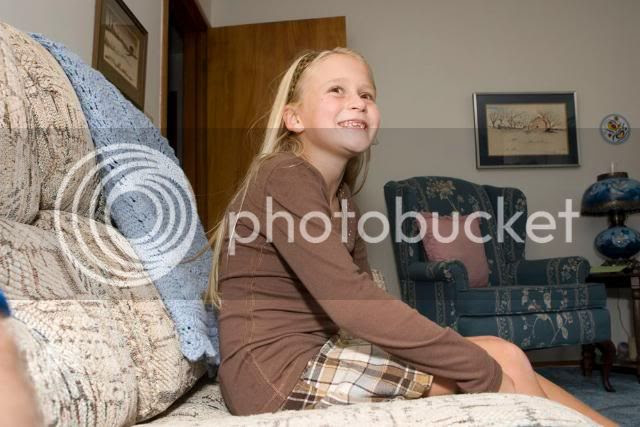 Dad's oldest brother Marvin who traveled 4 hours to see him and back home again all in one long day. 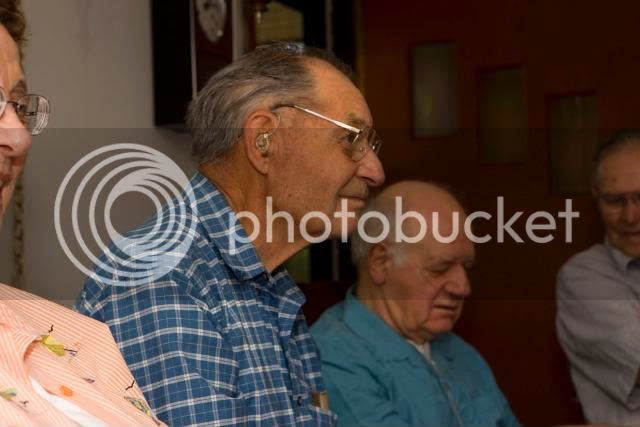 The is Dad's second cousin. He told a story of how he needed to borrow a car once so he could take a girl out. My dad offered the use of his car but told him he had to have it back by 8 the next morning so he could go to work. 8 o'clock rolled around but not the car. So my dad found another way to work. Later the car was returned and an apology was offered and accepted. Dad never gave it a second thought. But all these years later, Glen felt indebted to dad and put a little something extra in a birthday card for dad, money for gas plus a whole lotta interest after all these years! 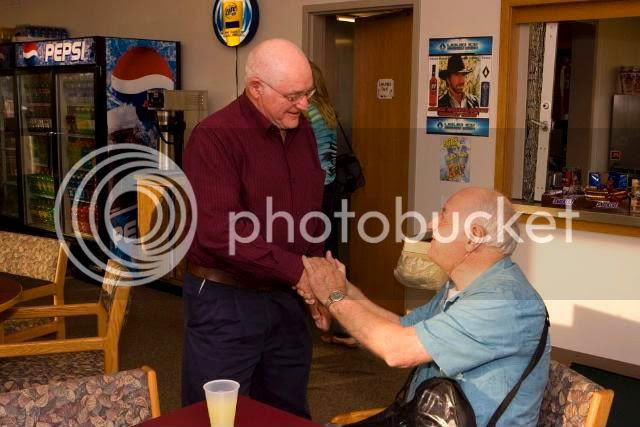 This is my cousin Steve who I didn't even have an address for. But his sister called him and found out although he lives in Colorado, he was going to be in Fargo for the weekend. How's that for a coincidence? 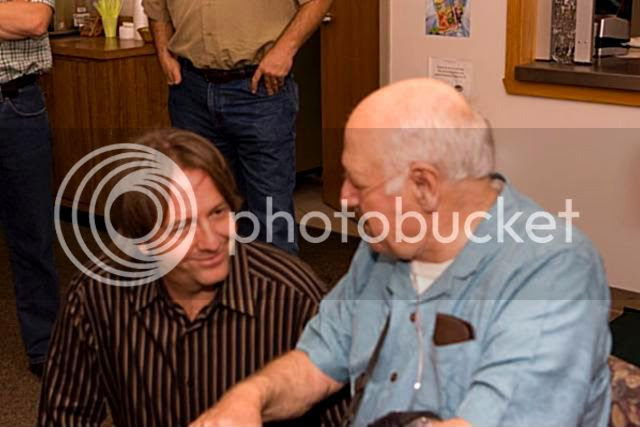 This is my aunt Marnie, who is my mom's sister. I used to be mistaken for her daughter all the time because she looked so much like my mom. But the funny part is she has 3 boys. 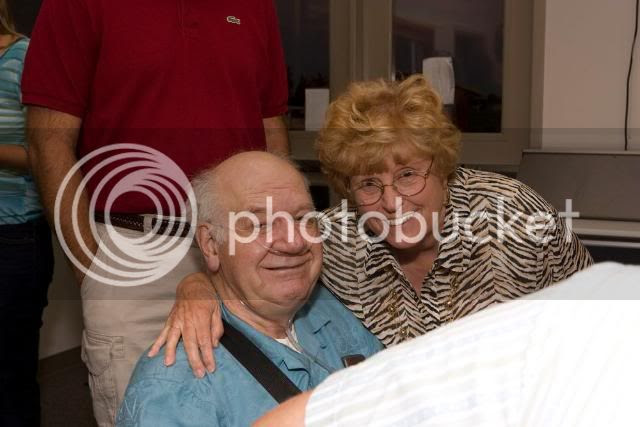 This is Lorraine who also traveled from the small town my father grew up in. Her and her husband Gordon farmed down the road from where my dad's family farm was, which was farmed by his brother Marvin and his family. 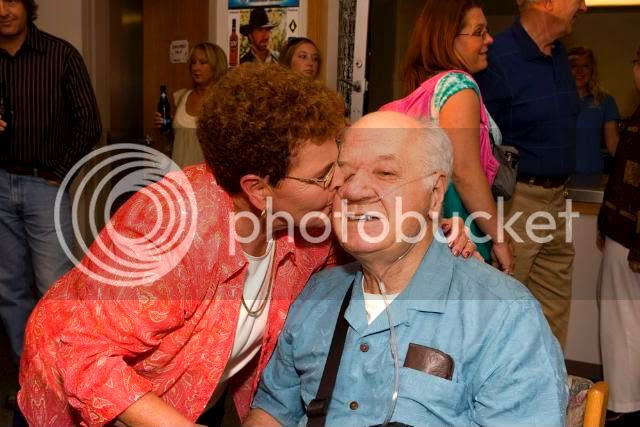 Out of my 12 first cousins on my dad's side, 9 of them traveled from very far away just for my dad. 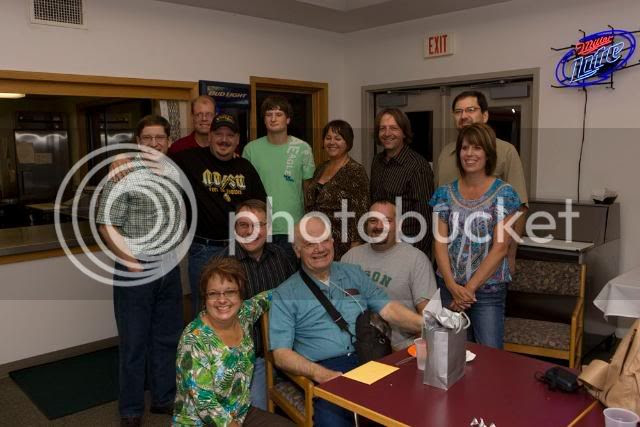 This is my cousin Kirby who has a very "infectious" laugh. I am sure he is joking with my dad about something. But we also enjoyed teasing him as he is the state epidemiologist with the North Dakota Department of Health, and all of our hugging and handshaking is on his list of no-no's in the midst of flu season! 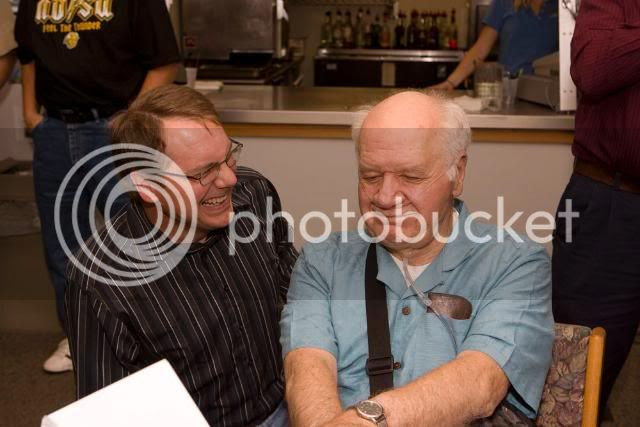 This is an extremely happy girl watching the magic unfold before her and filling her with more gratitude than she can express. 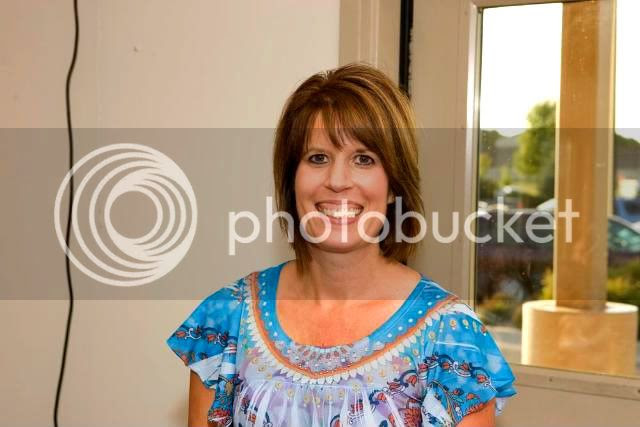 This is Ivan, or to some of us, Mr. Camrud, as he was a teacher for many years. But he has also been a good friend to my dad.
And even though Ivan himself has to be in his 80's, he painted the trim on dad's house for his birthday. That is a huge kindness that is difficult to repay. 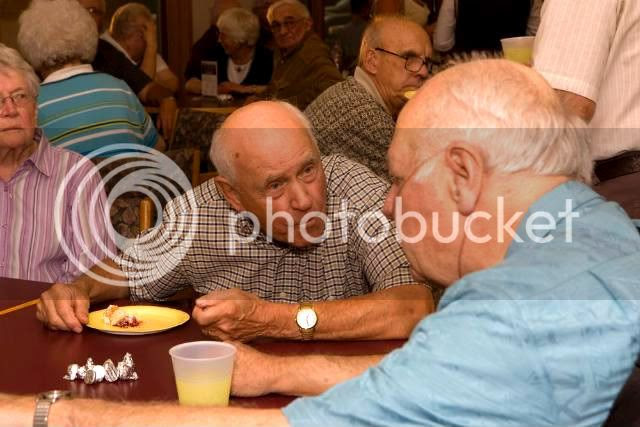 Did I mention how yummy the cake was? 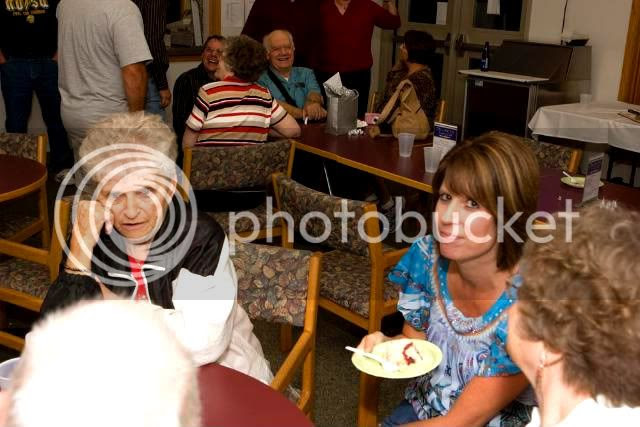 This brought me to instant tears. This is my Great Aunt Myrtle who is 98 years old. She is my grandpa's sister. Yep, 98. We invited her to include her, never believing she would come. But she did and shocked the heck out of so many of us. She taught me how to gamble with dice when I was young and we played for money. She has a keen sense of humor and sold her crochet work for years. I can't wait to share a story that she wrote some day... it may be where my writing chops descended from. 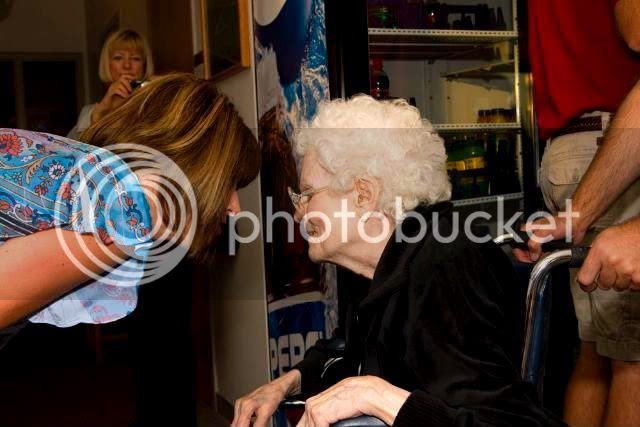 My brother Lee talking with Myrtle. 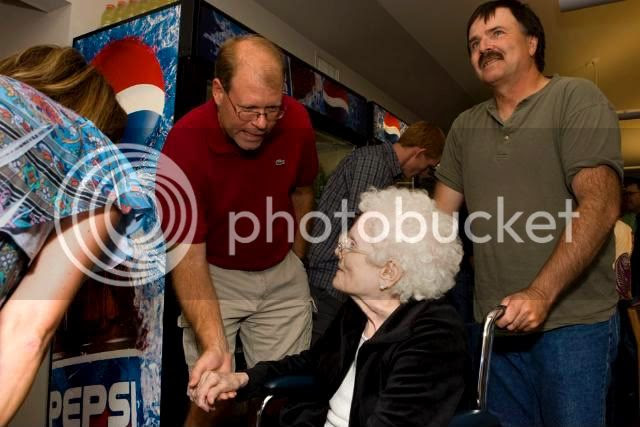 My cousin Dean and his family who had been out of town but made it home for the last hour of the party. 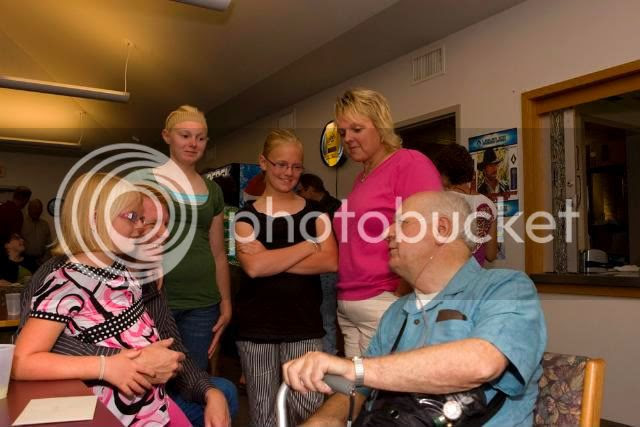 One of my favorites from the night. Watching my brother's daughters clearly looking up to him with what might be just a bit of adoration. I might know a bit about how daughter's look up to their dads. 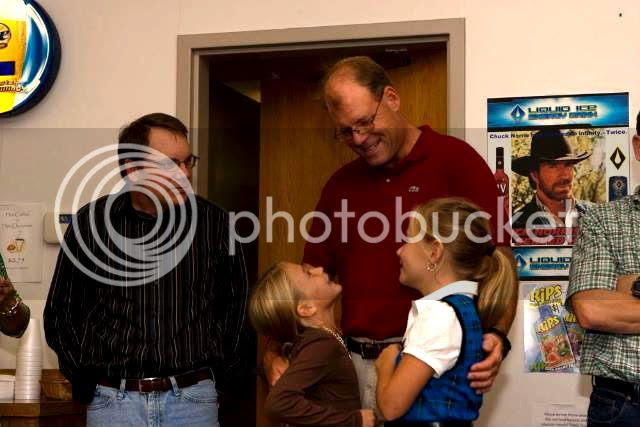 My cousin Kathy, the only girl amongst 4 brothers. 4 out of the 5 Kruger kids were in attendance. 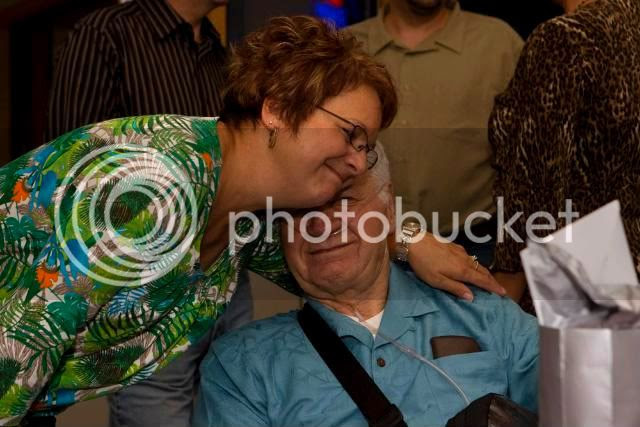 11 out of 14 first cousins (including my brother and I) We used to go to the small North Dakota town they all lived in and play at the farm. We even brought our camper and stayed at the farm. I learned how to ride bike there as did many before me. We all have fond memories of our time spent together. 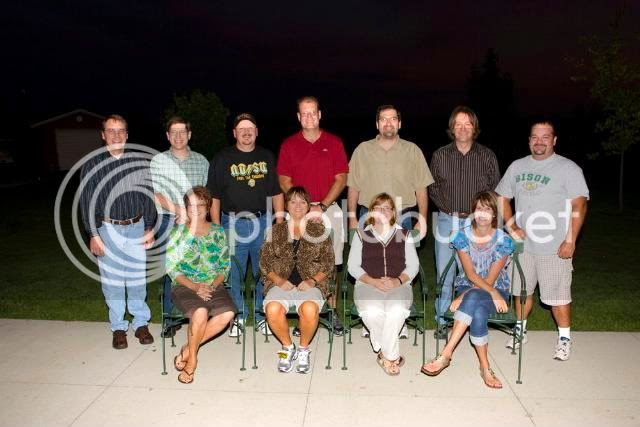 This would be my mom who is 74, works full time and still is as feisty and spunky as ever. I think she has a bit of Myrtle in her.

The view from outside the club house. My dh took all the pictures the night of the party and I am eternally grateful to him for that. 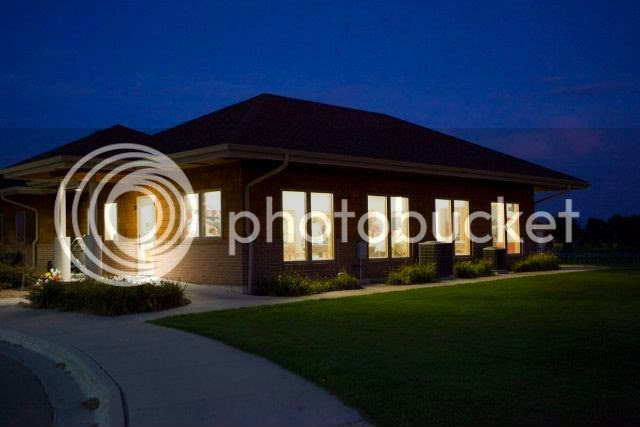 This is my brother Lee, his wife Kelly and their girls, otherwise known as "The Hershey Helds." Kelly was an amazing hostess and made everyone feel welcome and included. She enabled mom and I to relax and enjoy visiting with our company instead of performing hostess duties. I hope she knows how much we appreciated it. 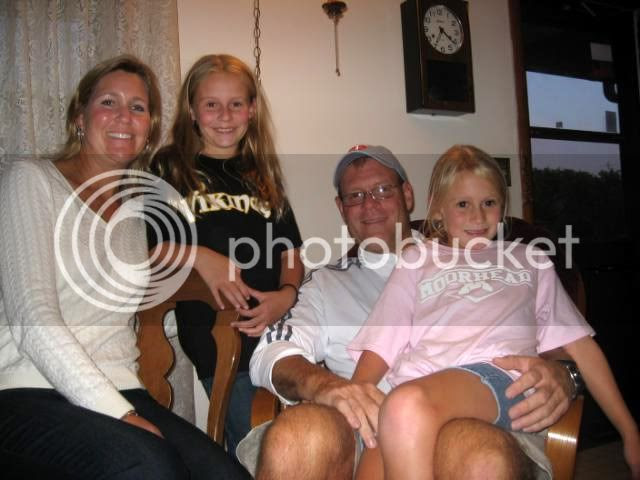 This compilation is a mere fraction of the people, the stories, and the photos from the party. What became abundantly clear to me, is that my dad has been a cultivator. Its true he grew up on a farm and honed his skills farming and cultivating the land. But he has built his life cultivating friendships, and relationships. His harvest is truly abundant and filled with love.
Posted by Vicky at 1:12 PM