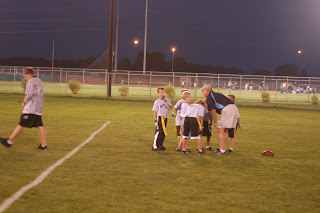 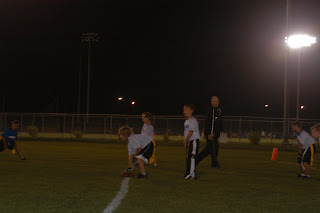 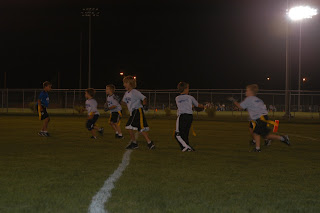 Its well established that Nolan loves sports... ALL SPORTS... and has been waiting to become old enough to play football. Although its become evident to us that his grasp of the sport is fairly limited. For the longest time we have had questioned Nolan about the "position" he would like to play and he has always responded he just wants to run the ball in for a touchdown. In exasperation with our line of questioning one day he finally responded... "Dad, I just want to be the one in back who cathes the ball... you know the catchingback!" And no matter how many times we've tried to explain the various positions he adamantly refuses to acknowledge that a wide receiver or tight end or quarterback even come close to what he wants to do.

Of course it hasn't really mattered since the kids don't have an opportunity to play football in Moorhead until they are in 4th grade. But then we discovered a secret... there was a place the kids could play and were having a blast doing it... Fargo. Fargo parks and rec. has a flag football program starting at 6 years old. And they put all the Moorhead kids on a team according to their school. So far we've played two games. While technically not keeping score, we "won" the first game 35-0. Last night's game was a real contest however and we squeaked by 7-6.

As for the catching back? It didn't take him long to figure out that if you wanted to have contact with the ball more than just a few times... that the appropriate position would be quarterback. I will reluctantly post a few dark pictures but between figuring out one of Rick's cameras and swattng mosquitos I was a poor picture taker! Lets just say after last night many of us were left with the feeling we had room for improvement.
Posted by Vicky at 10:58 AM