standing at the edge of grace 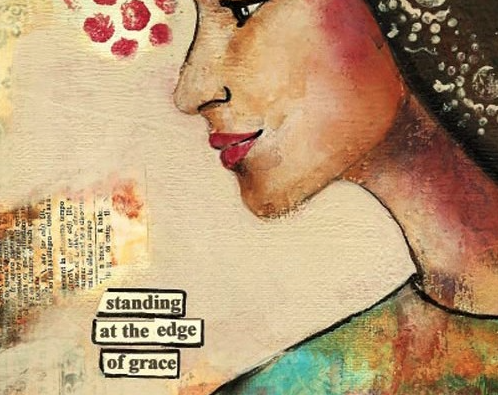 “Grace is the sweet moment you never expect but turns up to get you through a day, an appointment, a reality you never, ever dreamed for yourself.”
― Kara Tippetts, The Hardest Peace: Expecting Grace in the Midst of Life's Hard

Some of my moments of Grace this past week...  Hard Grace... but still Grace.

For just over two weeks, I checked on Mama, the dove sitting on an egg in the flimsy nest of twigs and fluff, and stuff, in the tree in our back yard.  Every time, she was there.  She weathered the storms, the downpours of rain, the gusts of wind.  Through it all she remained hunkered down. 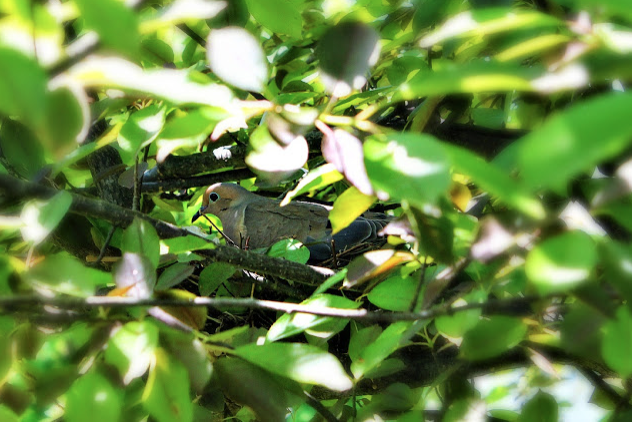 Till that one day last week.  I looked.  And looked.  Up through the branches on my tiptoes, all I saw were twigs.  So I quietly slid a chair over and slowly raised myself up on the wiggly chair.  To my utter delight, there it was- her baby!  The top of its head was fuzzy.  The feathers short.  I had to thrust my camera over my head to get a somewhat clear photo. 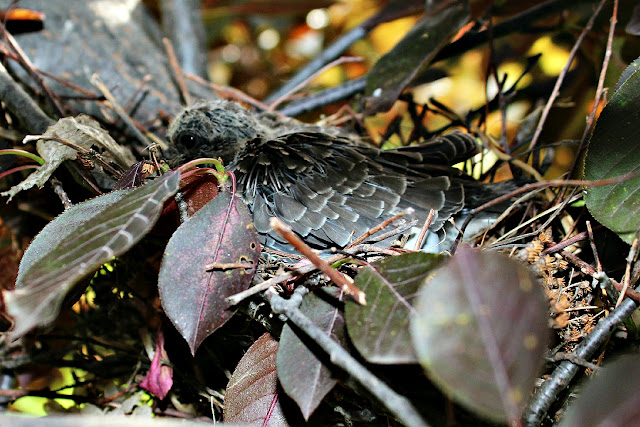 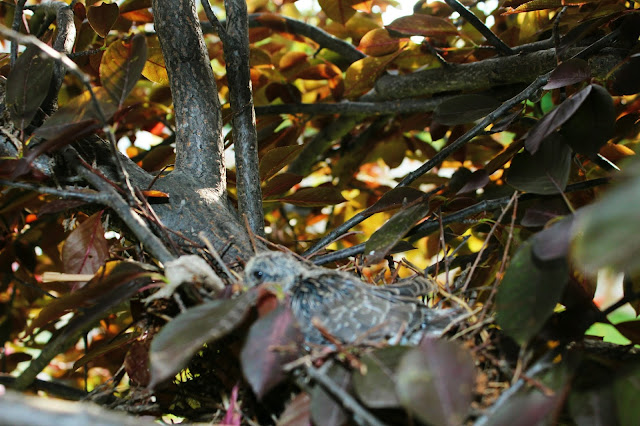 I've seen Mama come and go.  But the fledgling baby remained. Crosby ran in and around barking, and lounging underneath the branches, yet the doves just came and went as they pleased. The mourning "coos" were loud and abundant throughout this nesting phase.

Though I keep checking, as I've heard the doves mate for a lifetime, and often have several sets of babies throughout a season.

In the meantime, we were back at the hockey arena full time.  It was too hard to capture the below in a decent photo- but I wanted to remember this moment of Grace, and gift, despite how the photo looked.

Nolan, and one other of his hockey team mates, were invited to attend the 2015 Fargo Force Tryout Camp.  It was such an honor to be asked to go.  Technically, he is too young to even make the team.  It was such an irony to see young men, with birth years of 1995- 1999, as the ones old enough to garner a spot on this USHL team in Fargo for next year, listed on the roster.  Then we see the '00.  And right next to that, is our son Nolan.  Too young to make the team, but wide-eyed and hungry enough, and brave enough, to say he'd love the chance just to try.

The speed of the skating is fast.  The style is physical and gritty.  The skill is awe-inspiring. You have to be quick with your decisions, and even quicker in the execution of moving that puck.

But each game, Nolan, got a little more confident.  A bit more used to the style.  He started getting shots on net.  And finally- he tipped a puck in for a goal! 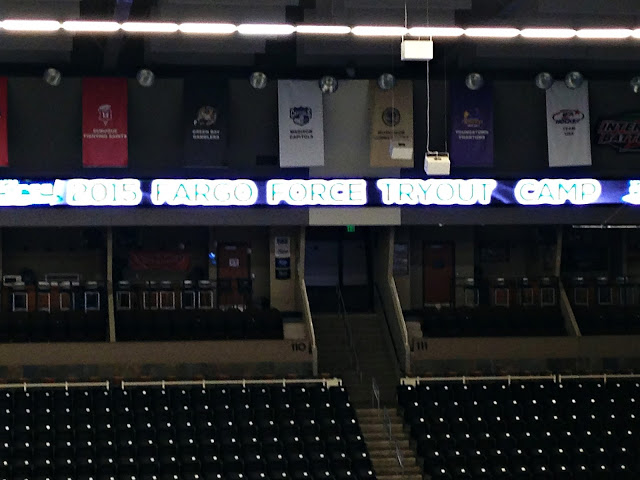 Coach Eades said Nolan could play with his son, Eddie, on the green team.  Love that "Sioux," color matched up with that team. 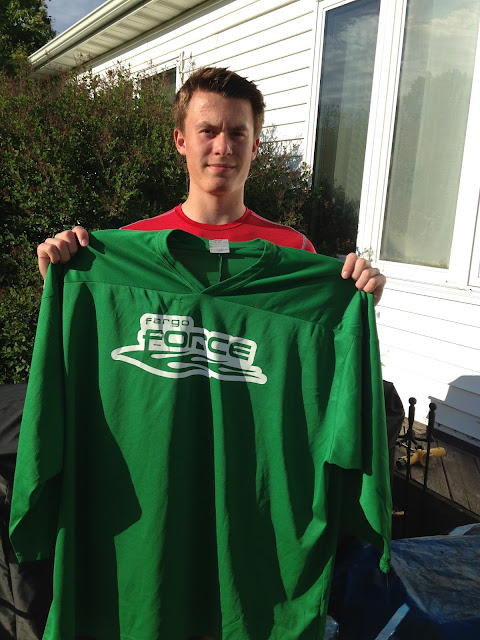 There are all kinds of ways to dry your smelly and wet  hockey gear.  Love the jersey looking at home as the license plate. 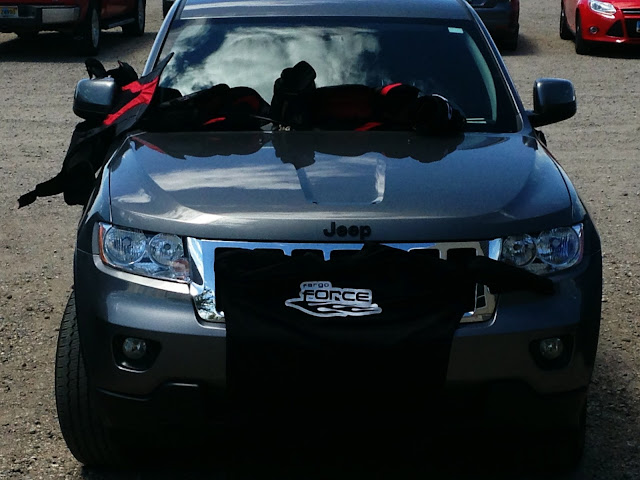 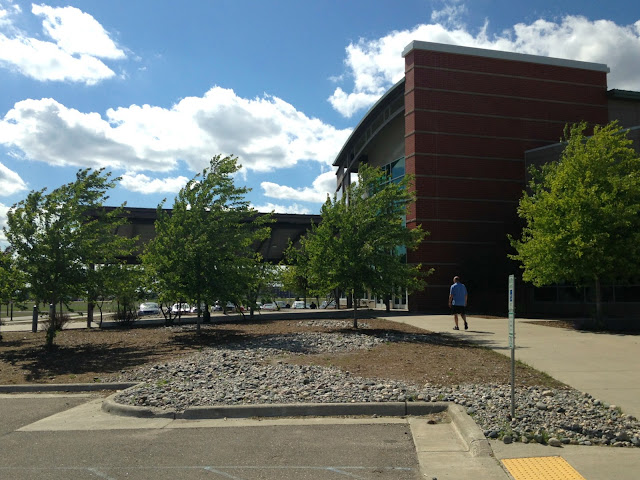 Nolan played the last game Saturday afternoon, and then we thought we were done.  So we packed up and headed out to eat.  But in the middle of our dinner, his phone rang.  His face broke into a smile.  It was coach.  Would Nolan like to play in the "Young Guns" game?

This time they were divided into Blue and White teams.  Coach Eades took the bench.  It felt like a glimpse of what going to a Fargo Force game next year, will look like.

Nolan rose to the occasion.  He skated well and played more physically.  Even though the puck hit the post, it bounced in, before it came out and technically, everyone knew Nolan had scored a goal. 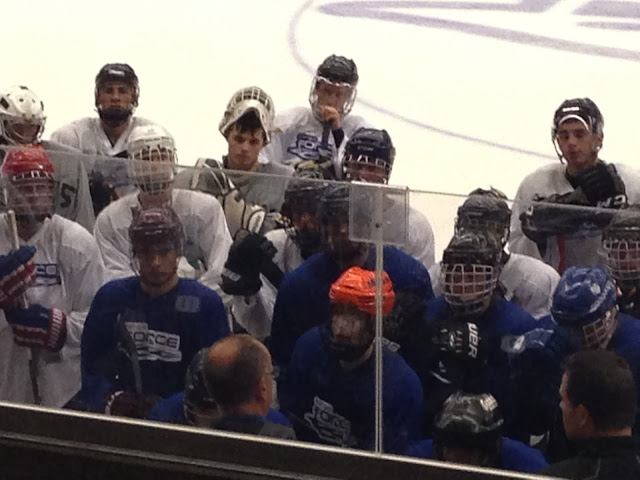 We left that night with a small taste of what Nolan's next few years of hockey may be like.  His eyes are open, wide, with the hard work it will take to get himself up to the next level of competition.  But he remains determined.  Filled with hope.  And ready to embrace all the ups and downs along the roller coaster ride of living the hockey life. 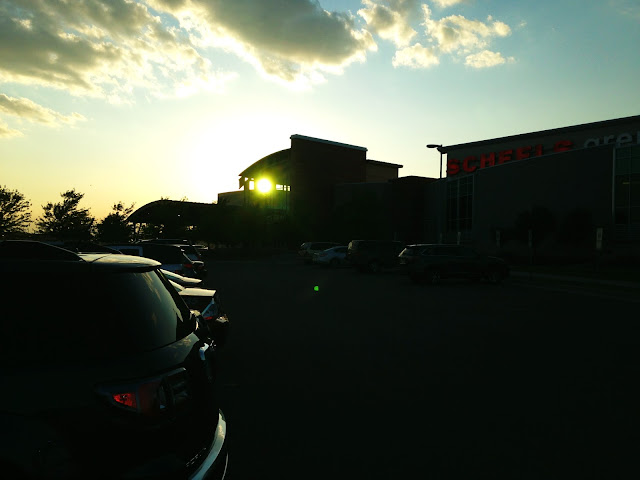 When you think of grace, this isn't what you'd normally think of, is it?  This is my Dad's old pick up.  With 4 flat tires, peeling paint, and seedlings growing out of the dirt in the bed of the truck.  We were thrilled when we discovered that Make-A-Wish could garner $500.00 for the donation of our truck to them.  They would even come and get it for us. 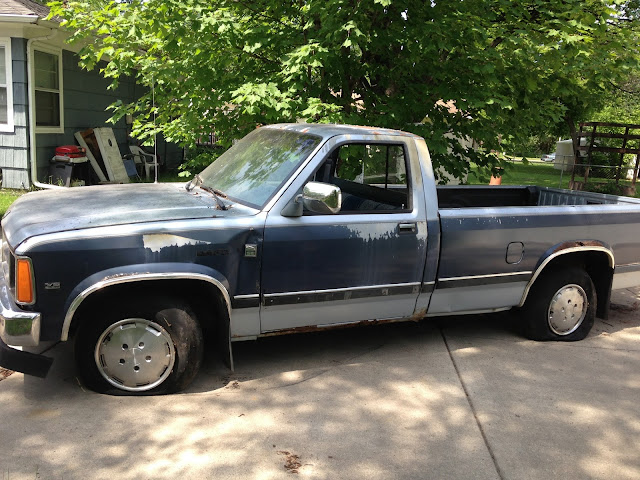 So we watched the young man pull in with his truck and hauler.  He placed a charger on the battery under the hood and we sat chit-chatting a bit.  We chuckled at the thought of it starting.  No way.  We'd tried so many times, just wanting to move it.  It wasn't going to budge for us.  We were convinced the young man would have to winch it the whole way. 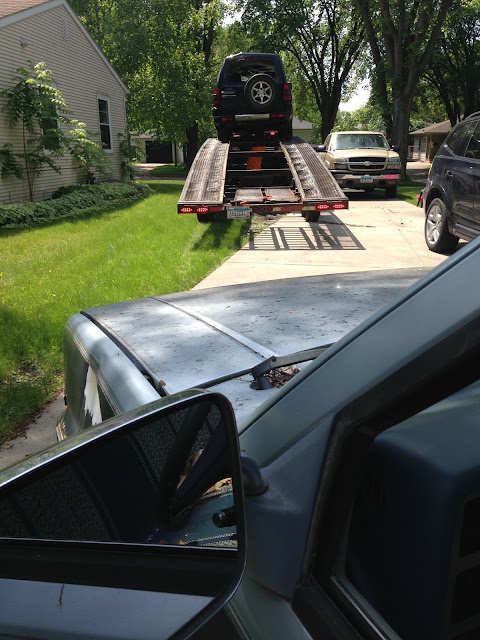 The young man insisted we try to start it.

We had to go in search of Dad's keys.  We watched as the young man inserted the old key into the steering column, and turned it over.  It chugged, and sputtered, but the boy sat turning the key, and low and behold... it sprung to life and started!

I mean- it started and ran so smoothly- we all just sat chuckling, and shaking our heads.  And all I could feel was my Dad.  Smiling.  And saying "That truck was the best truck I ever had. It was never much to look at, but that engine just kept going and going."  That truck sat outside for two Minnesota winters, with no protection from anything- and started like a charm. 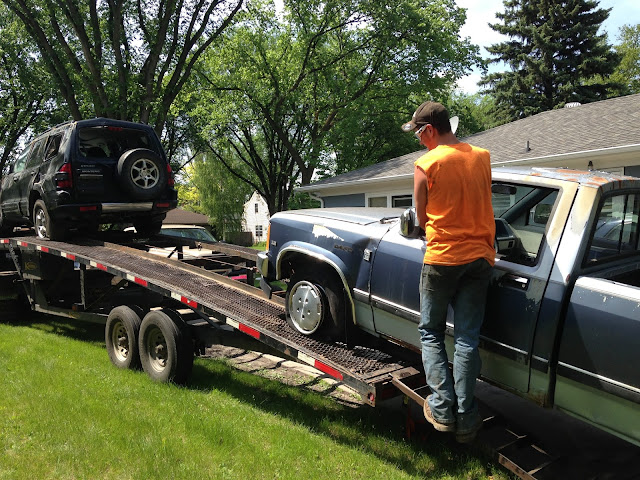 As I've watched and listened, I've discovered Grace can even come knocking on your door.  It was nearing a time when I settle in for the night.  Fatigue has been gnawing at me and I am resting in bed early evening.  But the knock on the door was insistent.  Who could it be?

A Cash Wise Grocery Store, delivery driver, asking if I was Vicky Westra, by chance?  My eyes wide in wonder, I assured him I was and he smiled and said okay- lets get this thing started.

Crate after crate was opened, as bag after bag of groceries traveled into my kitchen.  Bunches of fresh fruit.  Bags of chicken breasts.  Bags of lunch meat for sandwiches.  Cheeses of every kind.  Eggs, potatoes, and pizzas... etc.  A turkey even, with stuffing!

The bags on the floor were just a small part.  The table and counters were all filled as well.  I lost count at 24 bags of groceries!!

And the driver?  Said it was all anonymously ordered and paid for.  He couldn't give me a clue!  He said he was a supervisor for the store and wanted to personally come out and deliver these to me.  He also stated this has happened only a couple of times over the years.  You could tell he was as touched, as I was.  We have eaten so well, because of this!  Colton has cooked away.  And Nolan was well fed for all of his hockey games.  We're so touched and humbled by this generous and thoughtful act. 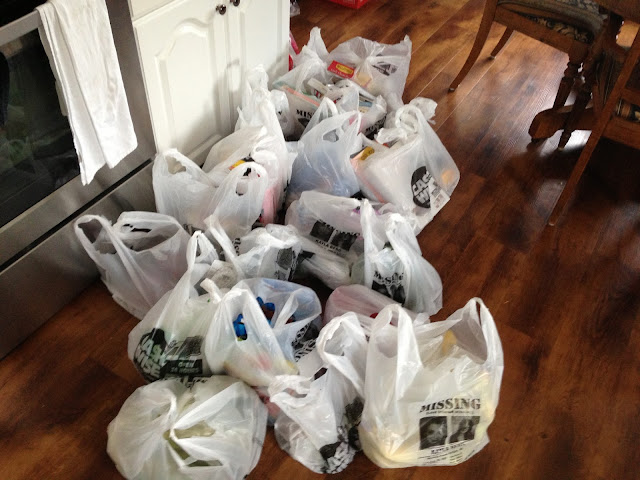 It seems as though, God was preparing us for all that was to come.  Our "nest" of comfort was being prepared for the newest journey we are about to embark upon.

We got right down to business at my appointment with Dr. Panwalkar on Tuesday.

I think the word we could use to describe my test results would be "stinky."  Or some variation of that.  As we went frame by frame through my scan, slowly the yellow spots, indicating active cancer, began to appear.  Some of the ones in my lungs have been there for a long time.  But alas, there were quite a few new ones as well.

And then he kept scrolling.

And there's my colon- shining bright yellow in a huge blob.  And right next to that?  Another huge blob on my uterus.  Oh and then- a spot in my pelvis... and then? Yeah, it just keeps going.

Stinky.  Way too yucky to even know how to respond.

My mind just thrusts itself forward and wants to know what we're going to do?

"I think we should consider chemo again," he says, hesitatingly.

And my face blanches, as I recoil.

"No?" He quickly questions.

"Maybe we can try another estrogen blocker?  A different one?"

But I tell him.  Even though what my face tells him is true.  As much as I don't want to do chemo- I don't think I have any other choice but to do chemo.

Aggressive chemo is indeed what I need to do.

Which one does he think?

And somehow, as I sit nodding, I know there is more.

He smiles and says...

"Perjeta, and of course Herceptin."

"You will lose your hair.  Your white cell counts will go low.  You will have to come in the moment you have a slight fever.  Your sense of taste will be off.  Diarrhea is often part of it.  You will have to do steroids- and watch for rashes..."  His voice trails off...

I'm sitting and nodding and knowing.

And somehow, despite how yucky this all is... I don't want cancer to steal my joy.

He is my tower of Grace I lean on.  Will he do another picture with me?  And when I tease about how "famous" he is, he shakes his head and laughs his hearty laugh.  And we smile.

Because living well?  That is what beats cancer.

Living our moments well, with as much Grace as we can. 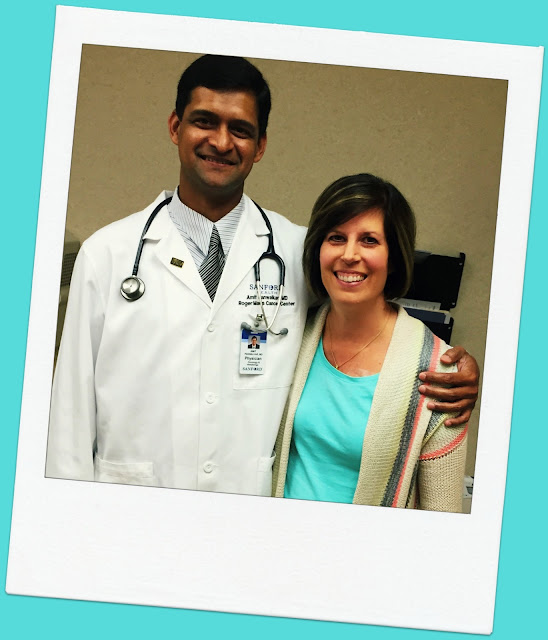 We may be needing some help with the boys, and other things, but as we slowly figure out this new path, your ever faithful prayers for guidance and clarity and strength are so appreciated.

~much love to you all~