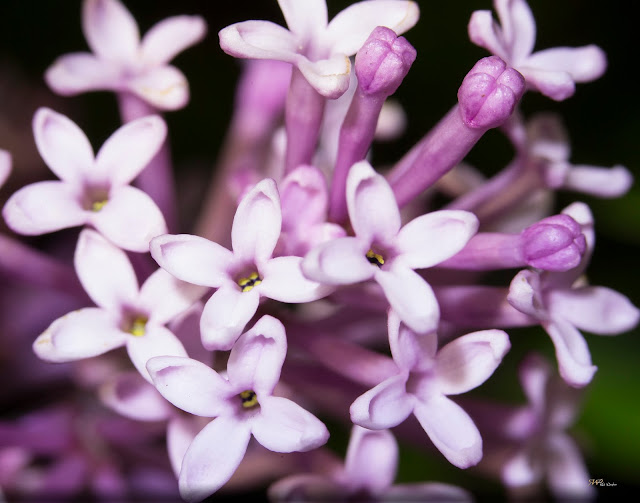 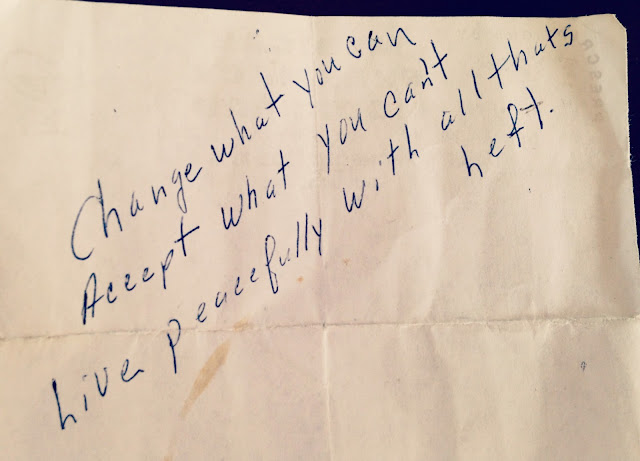 It fluttered out of a pile of cards mom had saved.  Someone must have said it to her.  Or she copied it from something.  Her ability to read was compromised, and she'd skim and scan for details, bits and pieces, but was never one to read from beginning to end.  She never made it through a blog post.  Or a magazine piece I'd written.  But she'd find a detail she could talk about.  A picture of someone.  Some small thing she would tell you.

So the scrap has been a mystery.

I've been staring at that bit of paper on my desk.  Words to live by, maybe?

It brings me back to that day.  The day she would surrender and begin to let go of the only thing she was left hanging onto.  Her family.

The tears were hard earned.  She'd gracefully accepted, over and over again, the things she couldn't change, while at the same time changing the biggest thing she had left- herself.

She was softer.  Gentler.  A side of her, I had always longed for in a way.  She gave up, so, so much, that she became, stripped down, and real.  It was just her.  Not her things, her possessions, her bills, or even where she lived.  None of those things meant very much to her at the time.  It was just her.  Her memories.  Her stories.  Her heart's longings.

Living peacefully was what she clung to.  And we all helped her achieve that in any way that we could.

Until, that day they told her.  Her body was beginning to fail.  No treatments were left.

And she laid back in her bed, and I leaned down to be at eye level with her glassy eyes, peering through the side rails of the hospital bed. "But you, all of you..." she choked out. "That's what I don't want to leave."  Her heart, so entrenched in each word uttered, each tear shed.

It was one of the truest moments we've ever had.  She had let down her guard, and was as vulnerable as I've ever seen.  We'd traveled over lifetimes, it seems, in just the past year, suddenly arriving at that place where we give all that we have left- ourselves.

I sit surrounded by some of her things.

Its those words, printed out in her handwriting, on a scrap of paper she found somewhere, that I return to time and again.

The tattered note.  With a coffee ring left on it and a crease in the middle.  That somehow saw her through her illness, with peace, and grace, until her very last days here on earth.

I was typing these words yesterday when the phone rang.

It was Dr. Panwalkar.

The doctor at MD Anderson, does not think I would benefit from IT Herceptin.  She did not want to see me.  I could still go to the breast cancer center, for a second opinion, but it would not address my brain, which is what needs treatment.

I'm disappointed.  And I have no idea what to do... next.   Dr. Panwalkar suggests we scan again, in a month, and go from there.

I trace the words again... "Live peacefully with all that's left."

It leaves a lump in my throat, and tears sting my eyes.

But the fragrance of lilacs freshly blooming in my yard are strong.  My mailbox fills with words, and gestures, and grace, and gifts.  Words carved in stone rest heavy in my hands.  While joy fills the faces of my boys as they open Birthday cards that scatter across our table.

And my heart seems to know, its enough... all thats left, is more than enough. 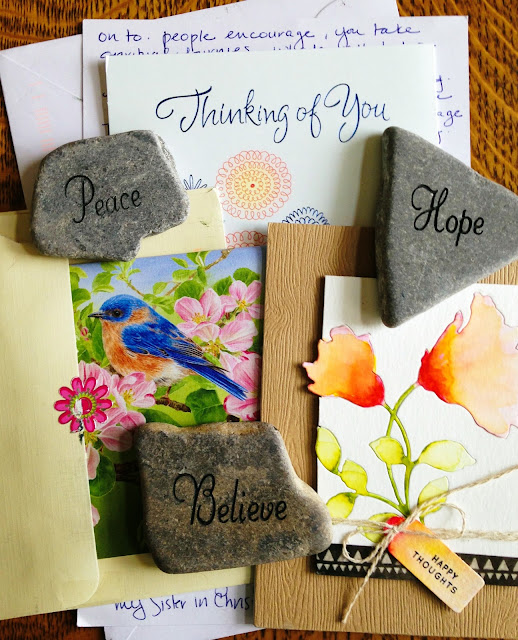