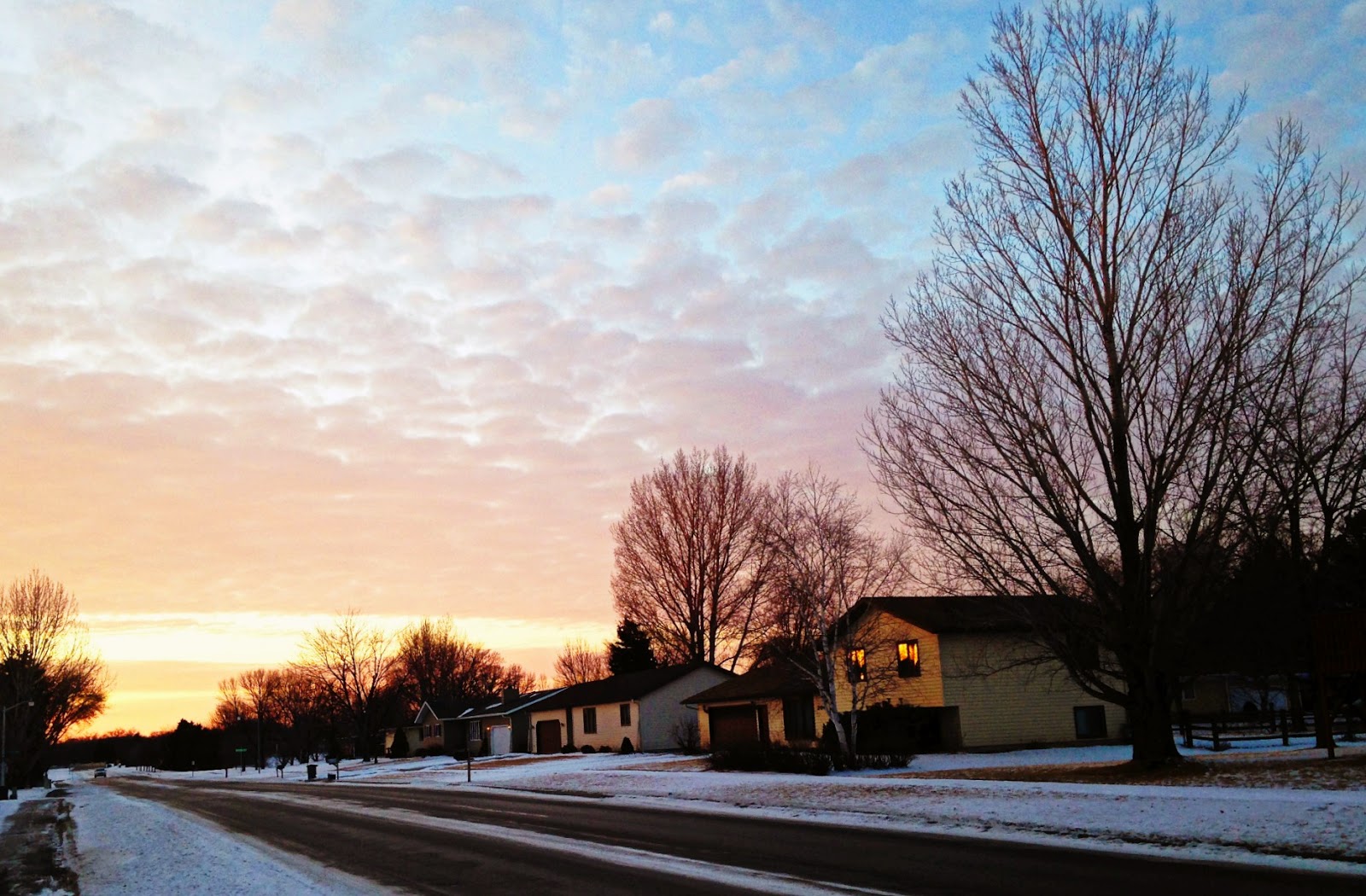 "If you can breathe and murmur your thanks, it’s still a mighty good day."  Ann Voskamp

The street by the side of my house goes straight past our house, and down in a straight line where if you squint your eyes, you can see a car down by the tree line, in the photo.

But what you can't see?  The sharp curve in the road to the left, down by those trees. Because if you continued to go straight?  You'd end up right in the mighty Red River.

A second later, the brake lights would be streaming from that car.  You have to slow down, to take the curve.  But you do it, without thinking about it.  With a new flood wall that's been built, and the thick trees, you might never realize the river is merely feet past the embankment.  So you bend with the curve.  Because its simply the next thing to do.

The reason I like this picture?  Has little to do with it being a great photo.  It was more about taking the photo.  I love the fact I could take my mittens off, and stand there, still feeling warmth in my hands to shoot the photo.  Again and again. It was close to 5 pm, and just light enough to shoot a glorious sun setting.  I stood there taking it all in, a long time.  It captured a mere moment, but one I lived well.

It's mid-January, and the temps are mild, and the snow is thin, and as I breathe deep, I think this is all gift.  Plus the sun?  Has been peeking out through the clouds, more times than I can remember in decades of January's in Northern Minnesota.

So I was gathering up Colton, and his gear, and my Target list, and jumping in the truck and leaving.  I smile, even though the engine light glowed at me, and the rumble of the truck grows louder as the rusted sides grow more pronounced.  It's showing its age and gentle decline.

Dr. Foster says my brain scan is a bit like that truck.  There is a "fissure," a bend along part of my brain, near the front, on the side, behind my eye.  If you follow the natural curve, an old rusty spot of cancer resides along the edge of it.  Its been treated before, and appears to be growing now. So it can't be treated with a targeted therapy again.

But you have to keep following the curve, and as you do, the next spot appears.  A new one.  A small one.  Not so very far, from the old one.  Close enough, that targeted therapy to this new spot is highly questionable too.

We're staring at this juncture in the road, pondering what to do…  because even though the engine light is shining, and the rust is gathering, and the signs all lead to a truck veering down the embankment…

the truck still goes forward.  It still steers.  It still drives.  It may not be held together with anything more than a wing and a prayer.  But it's going where the road is taking it- forward- into all it's tomorrows.  We already know-the terrain is uncertain, unknown.  So we'll slow for the curves, and watch for the sunsets, and live all our ordinary moments.

And if by chance you're standing on the side of the road, and you want to come - just throw your thumb up, in hitchhike fashion.  We're so happy to have you come along.