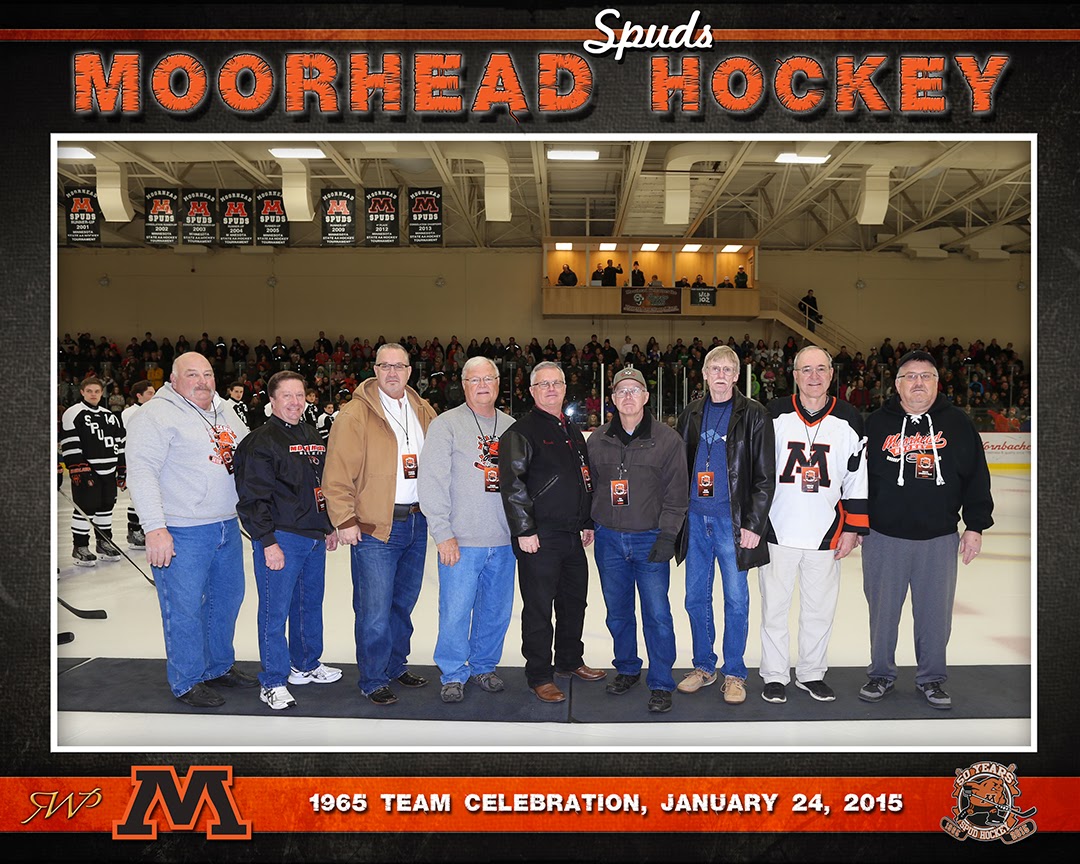 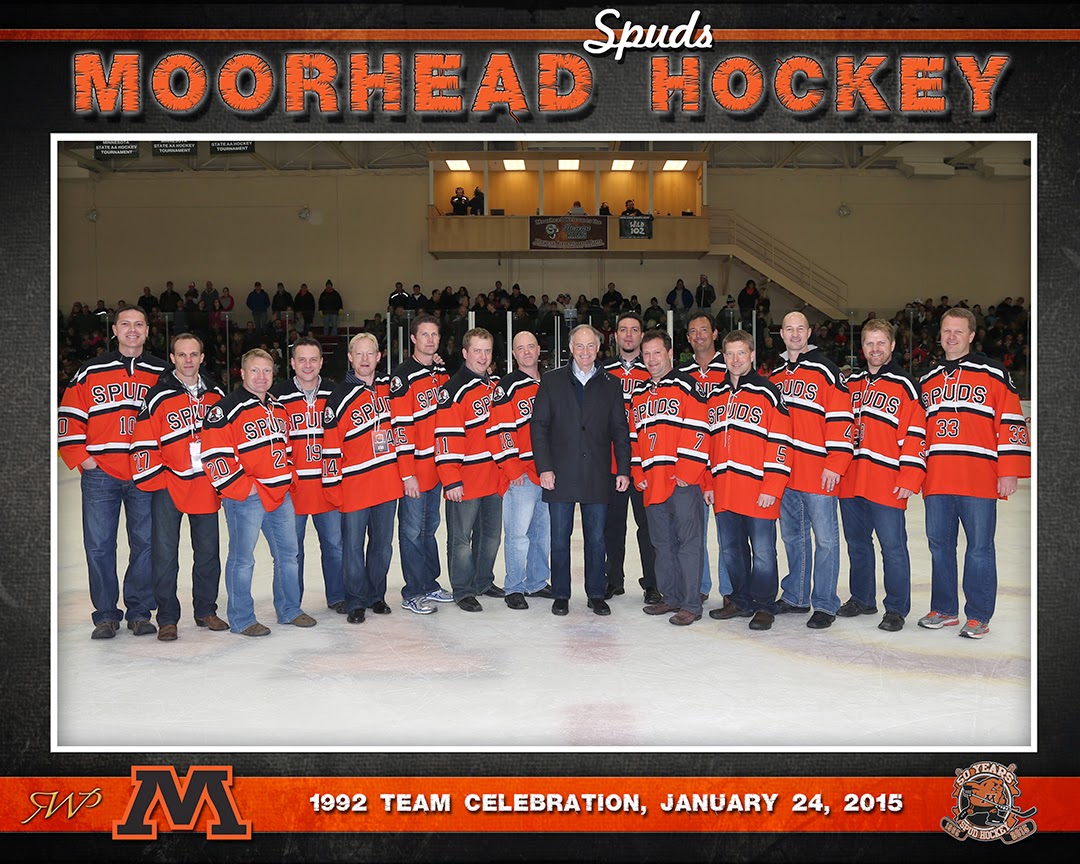 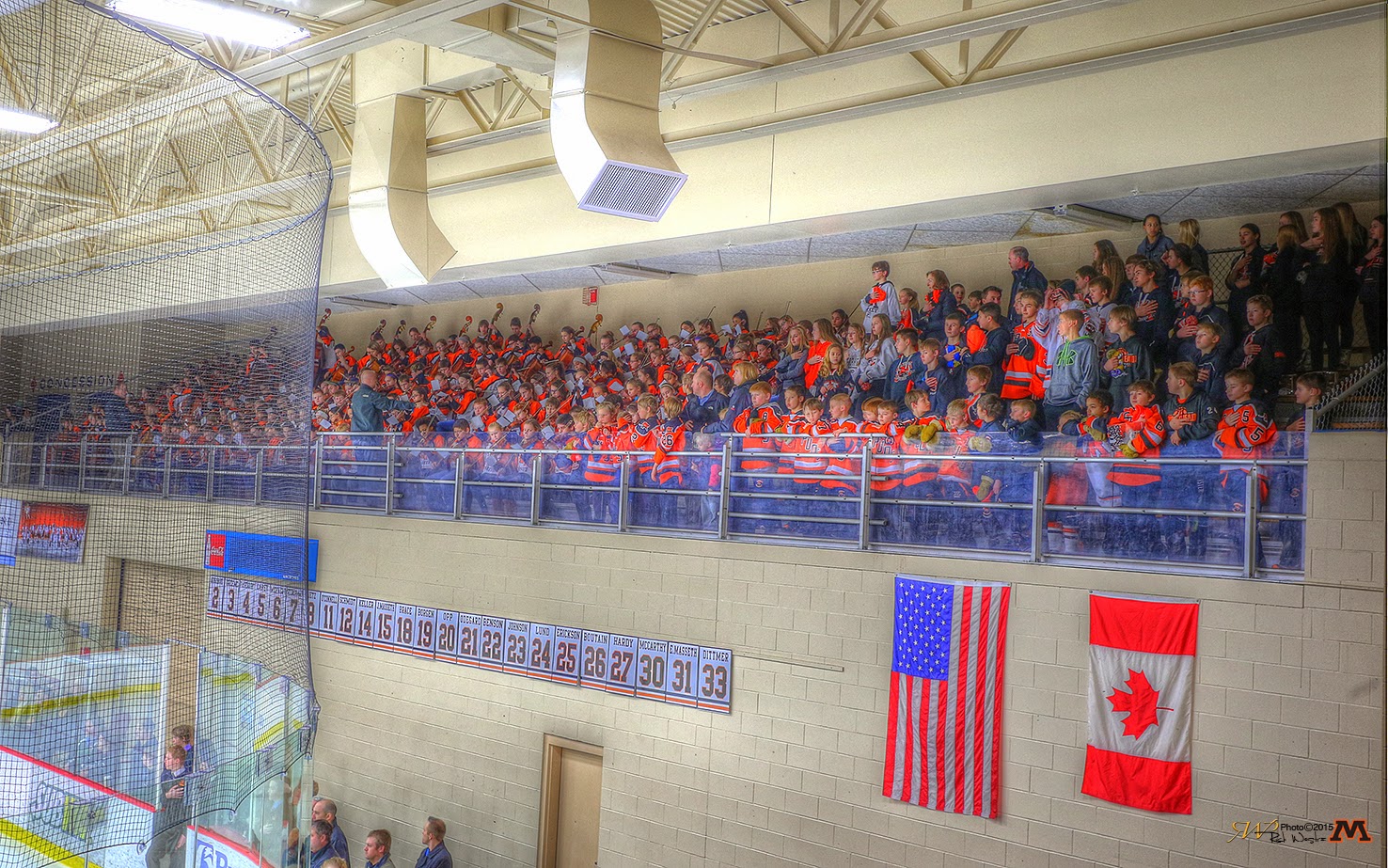 The mini-spuds, aka our Rookies, waiting to go out and play in between periods of the high school game.  (Hi Brady) 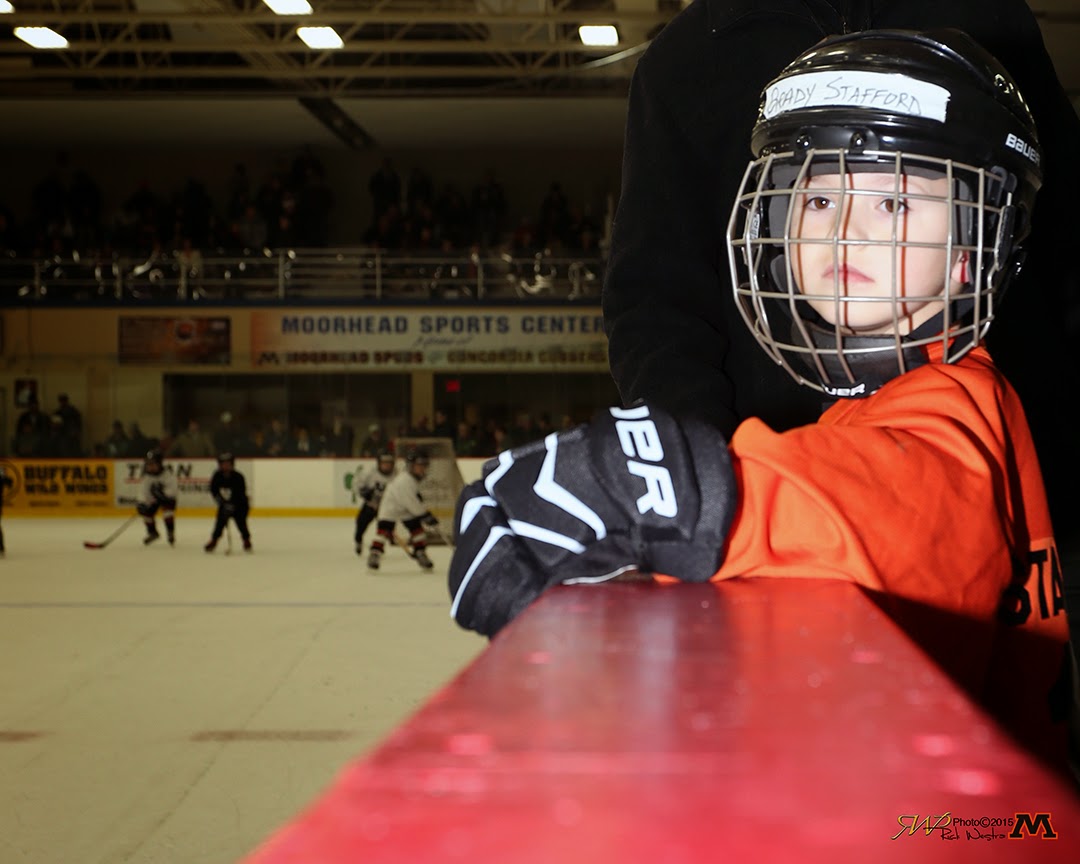 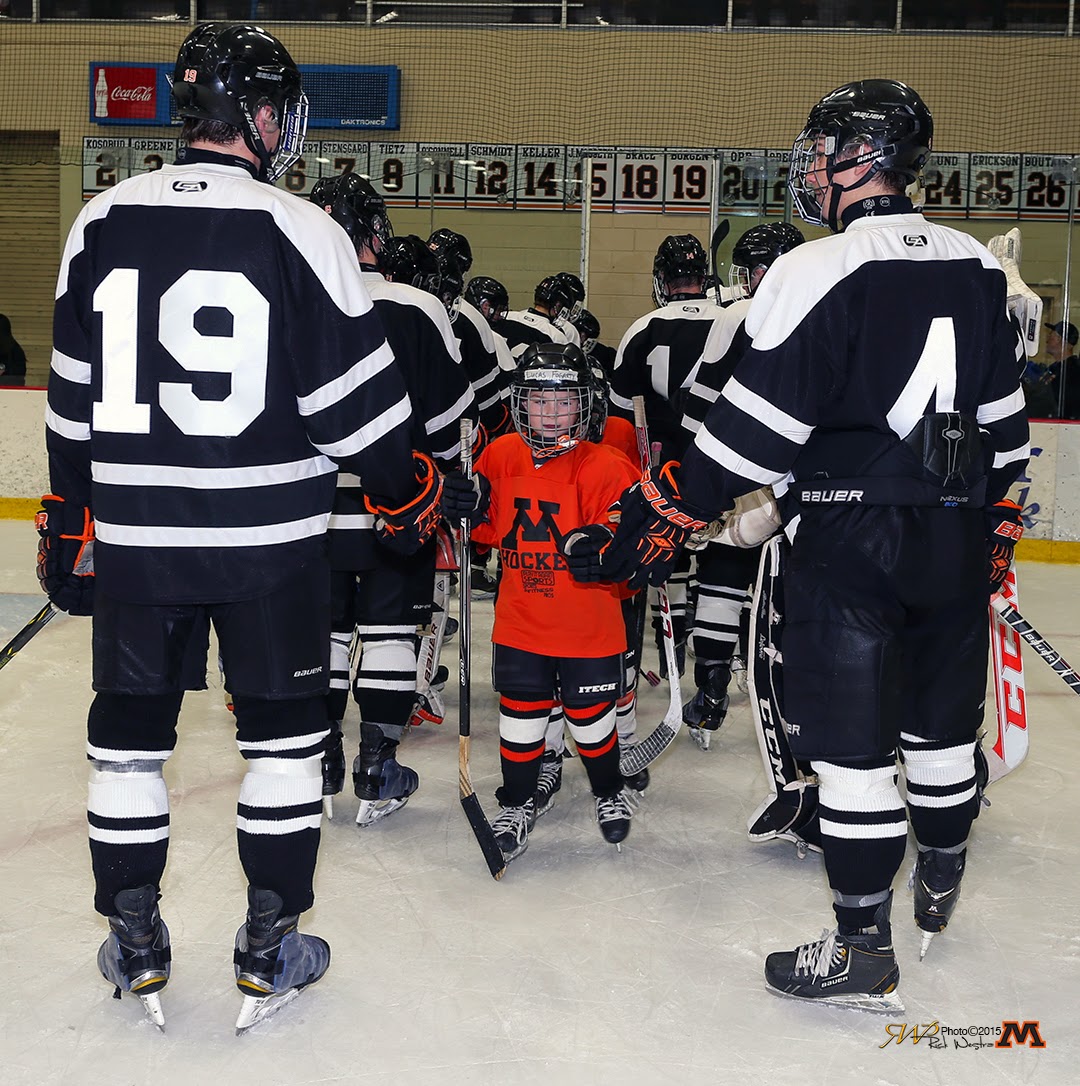 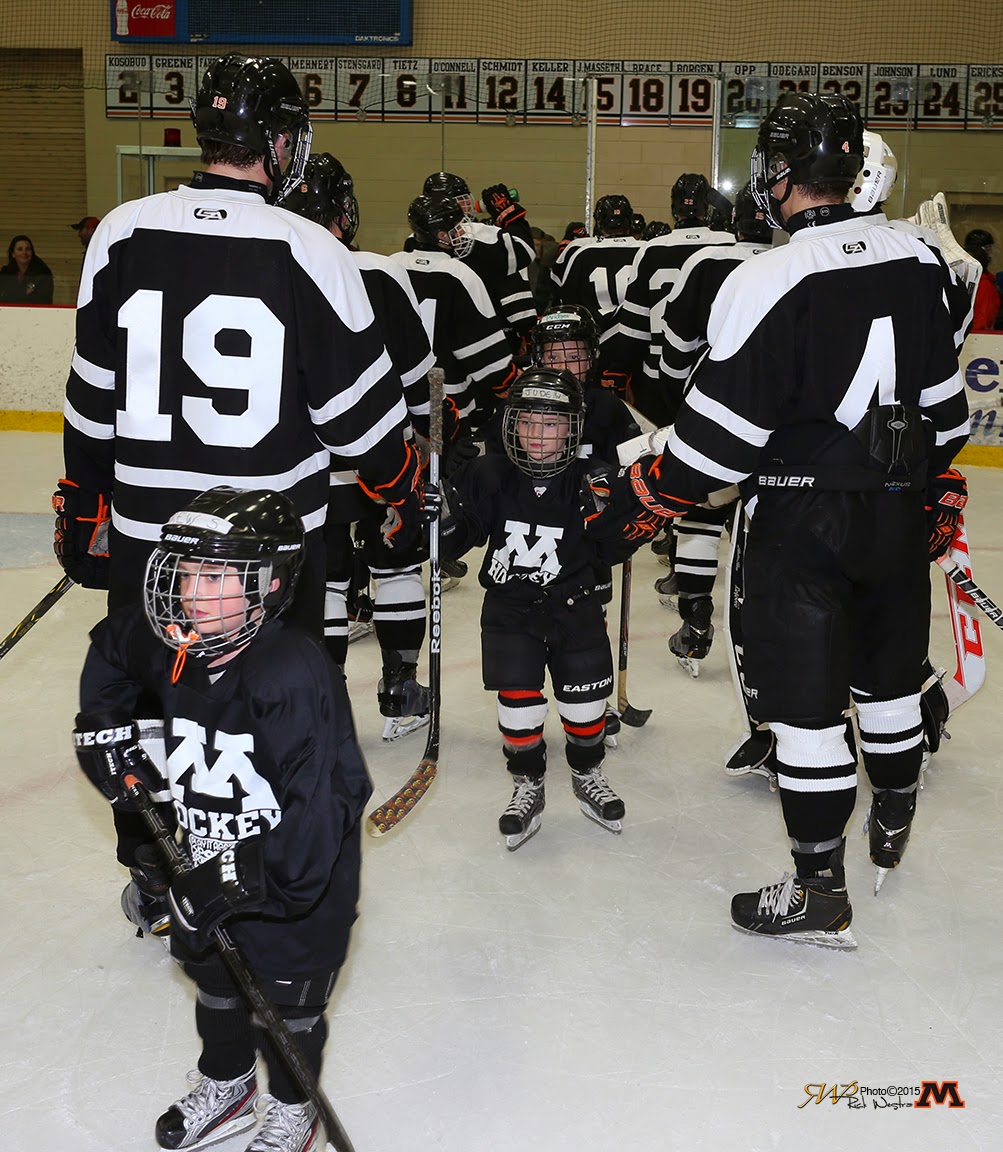 Another panoramic of the big social after the Spud Game.  It was so well attended and the committee that organized this big event did an outstanding job!

It isn't often we can get the 4 of these guys in one place at the same time.  In fact, we're missing one- Chris VandeVelde is playing for the Philadelphia Flyers, NHL team, and wasn't able to come home for the event.

But from left to right we have Matt Cullen (Nashville Predators,) Brian Lee, Ryan Kraft, and Jason Blake who all play/played in the NHL. 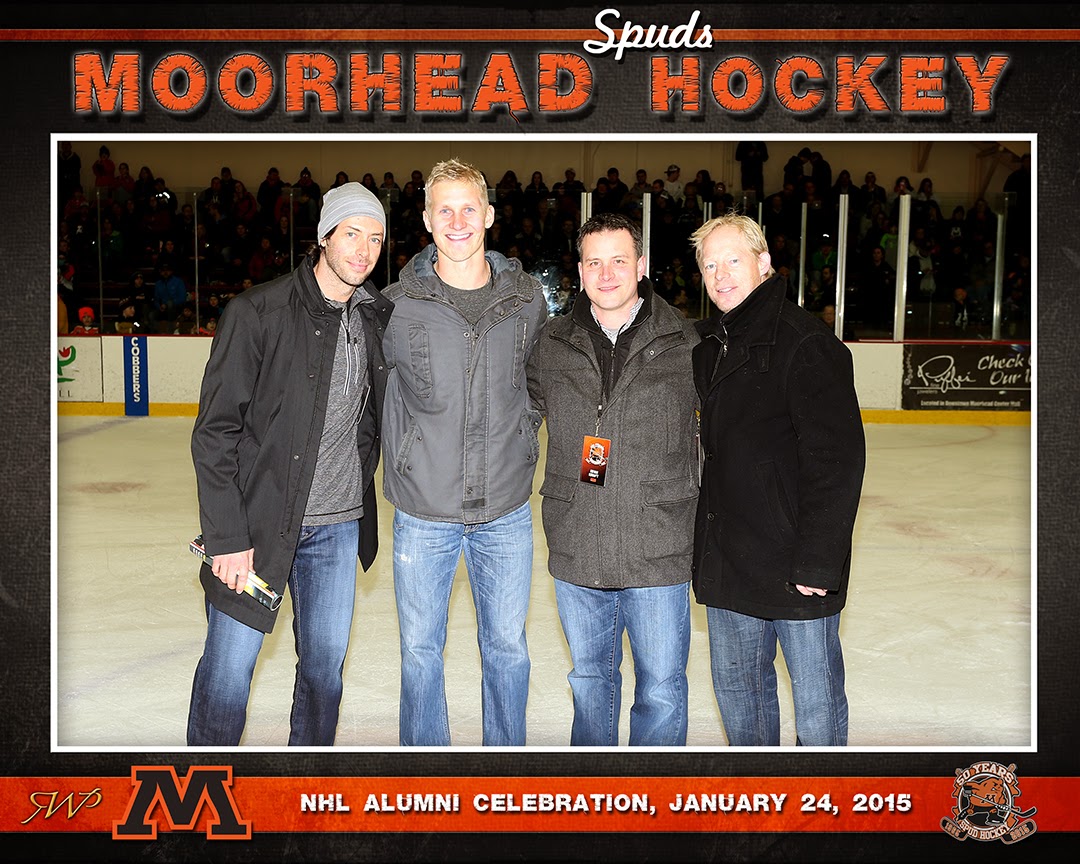 Last Saturday was such a memorable and celebratory day for Moorhead Hockey.  From the youth level which starts with Rookies who begin their hockey careers at the ripe old age of 4- all the way up through the high school level, and up even further to the very top level- the NHL- Moorhead hockey was well-respresented all day.

Colton's team played a game early afternoon that we got to attend.  Then Nolan's team played, right afterwards and the rink filled with fans coming to watch.  Nolan's team also won their game.  Nolan had one of those "dream come true, moments."  Former High School Hockey Coach, Dave Morinville, was at Nolan's game and saw him score a goal.  Dave came to us and mentioned what a sweet goal that had been.  I told him that group of Bantam AA boys, have always talked about their dreams of someday playing for Coach Morinville.  Even though Morinville has retired, those childhood dreams of playing for the Moorhead Spuds, live on in those boys.

We then went to the Sports Center and watched the Moorhead Spuds defeat the Roseau Rams in front of a packed house of fans from across the generations of Moorhead fans and players.

I felt like Rick's ability to shoot photos throughout the day, and physically carry and set up all his equipment, time and again, was an answer to prayers.  He seems to have turned a bit of a corner in managing the nerve pain from the shingles virus.

While Rick shot pictures of the speakers at the social, I marveled at how I knew so many of the people in attendance.  It truly felt like a reunion.  A family reunion of sorts.  There isn't anything we wouldn't do for one another- in and outside of hockey.

Like Cinderella at the ball, shortly after midnight I began to fade fast.  My energy drains quickly in large crowds, and I'd surrounded myself with them, all day.  Prince Charming was right there beside me, and we slipped away into the quiet of the night.

Mom moved Monday!  She is back in her room at Bethany Towers.  Between her hospital stay, and the care she received at Elmwood Square skilled nursing at Bethany, she hadn't been in her own room for almost 4 weeks.  She was so relieved to be back surrounded by her belongings.  I spent all of Monday morning packing, unpacking, arranging and sorting.  I got the phone transferred and left as both of us began to wane in the energy department.

So the next challenge has arisen- figuring out how to pay for her ongoing care.  With only her house left, we're seeking out all of her options to ensure she gets the level of care she so deserves. 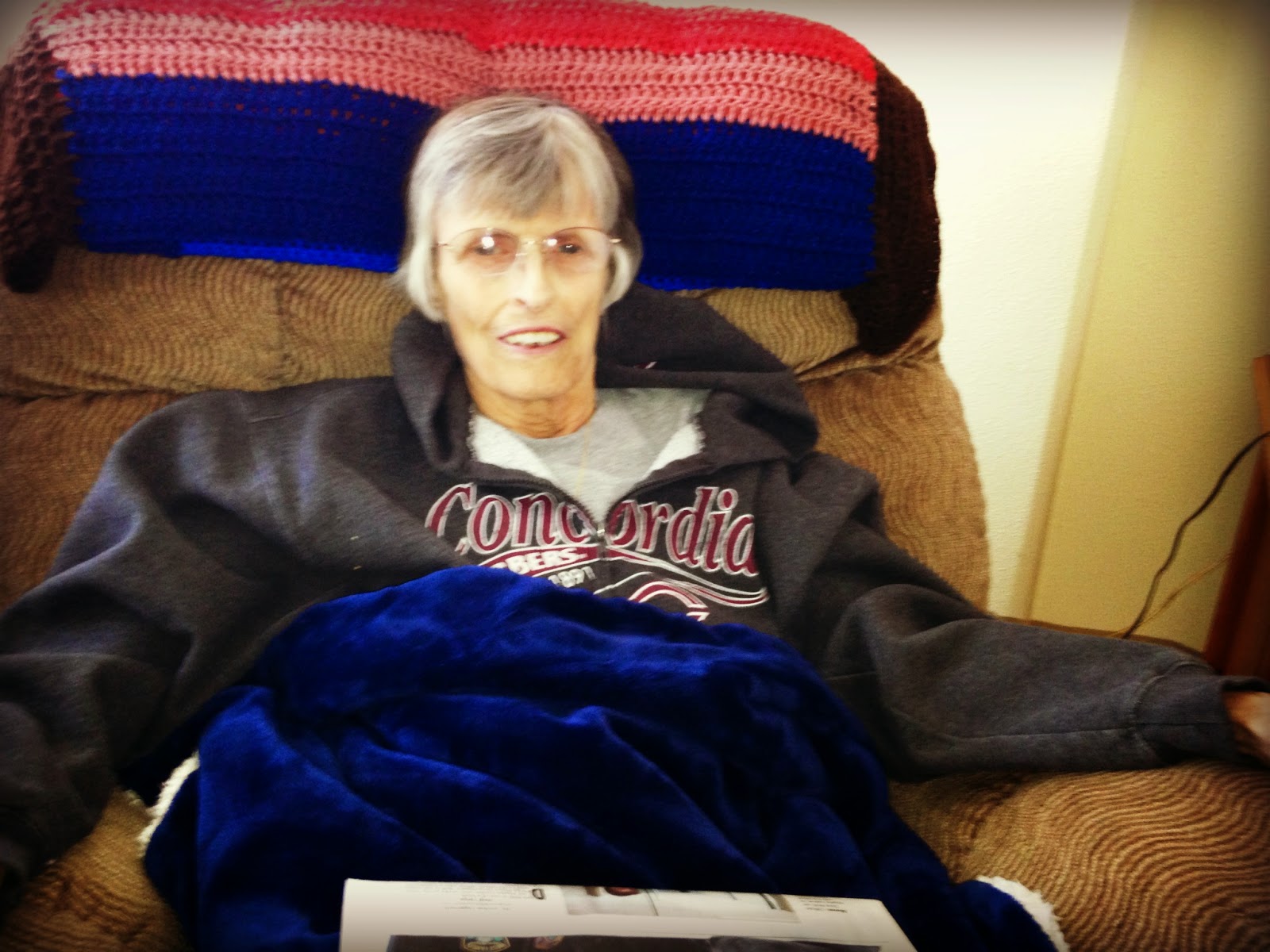