You'd think he was in a Halloween costume, the way he dons his "turnouts," in record time, practicing, in case there is a fire.  But its clear, this firefighter, my nephew, is not playing.  He may be 4 years old, but Ethan longs to be a firefighter and protect people when he grows up.

So when he flew to Minnesota with his Dad, (Rick's brother, Matt), Ethan walked into our house fully decked out in his turnouts.  Plus one other surprise.

His Dad promised him a trip to a local fire station.  Ethan has gone before and usually is given some crayons, a coloring book, and maybe some badge stickers.

But this day, would be his lucky day.  The fireman said he had something for Ethan… and came out with this authentic, and real firemen's helmet!

It has a dial in the back that allowed us to get it to a size that rests comfortably on his little head.  Wow, is that thing heavy!  But Ethan lifts it with such pride, he was literally beaming with that hat.  We rarely saw him without when given the right occasions to wear it. 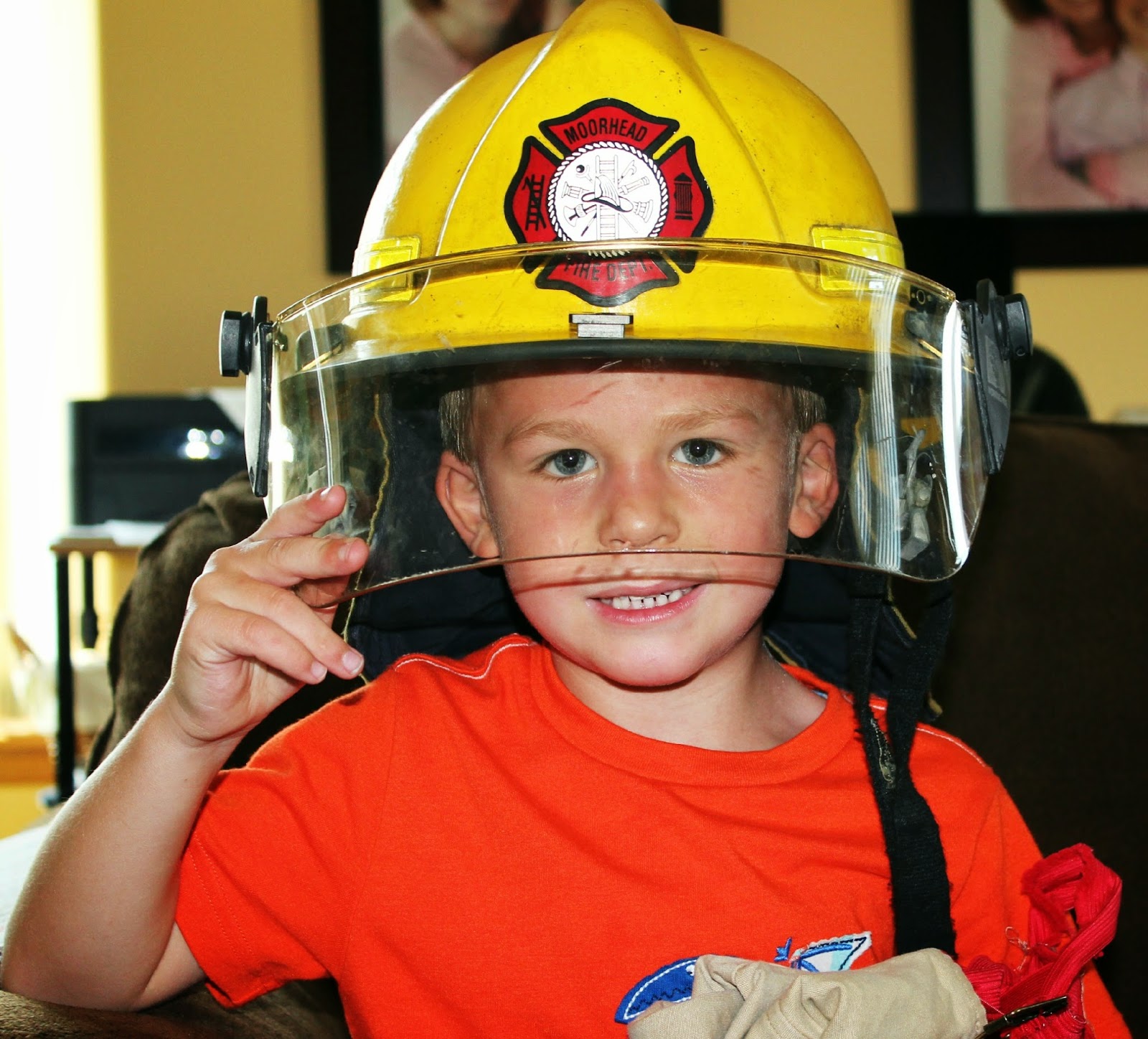 Here he is with his turnouts, gloves, boots, and that hat that he hoists to his head, again and again.  "Practicing," he'll tell you, just like firefighters do. 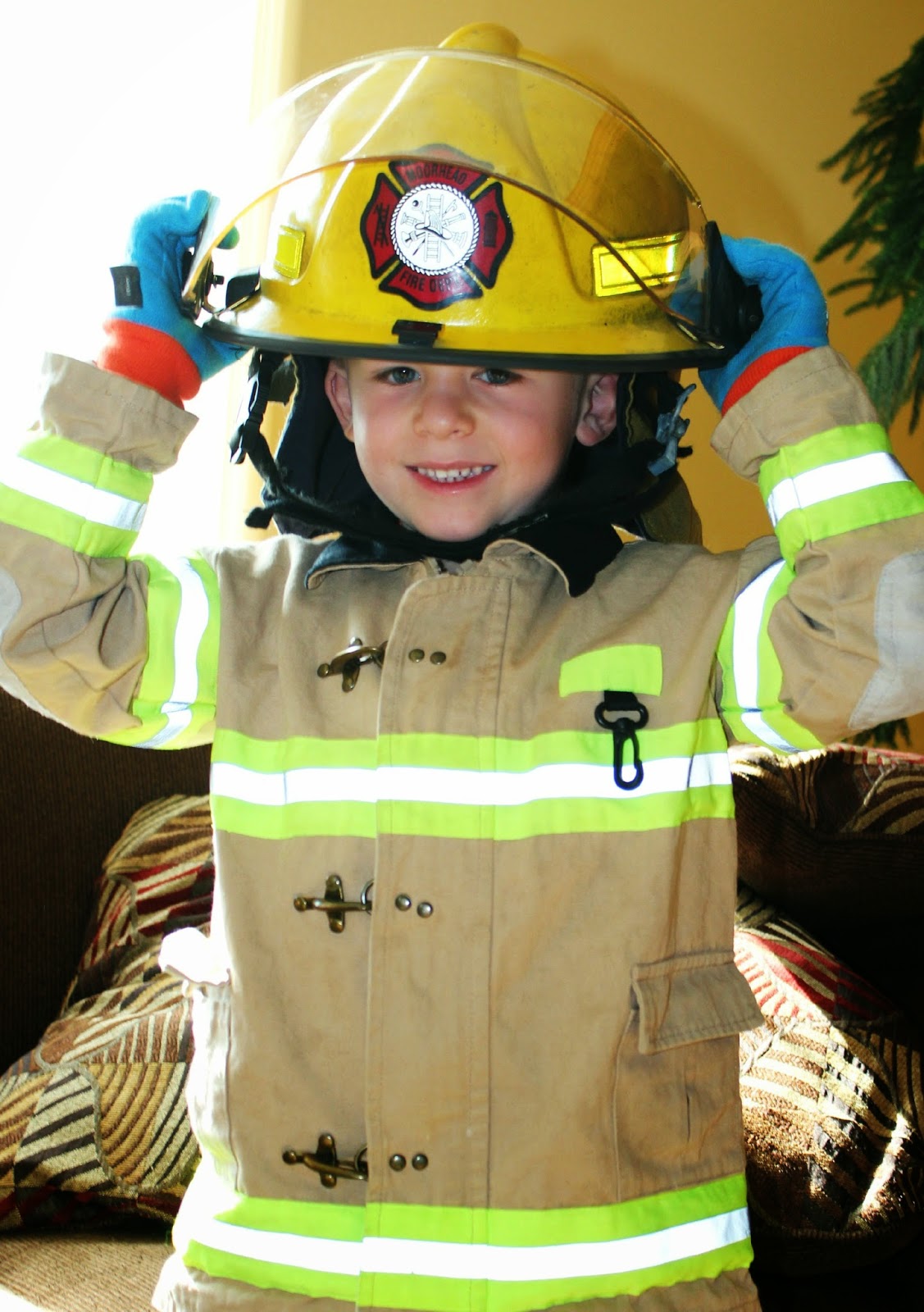 These two cousins, were instant buds.  Colton did a great job of keeping up with a 4 year old who was creative and active and simply a joy to be around. 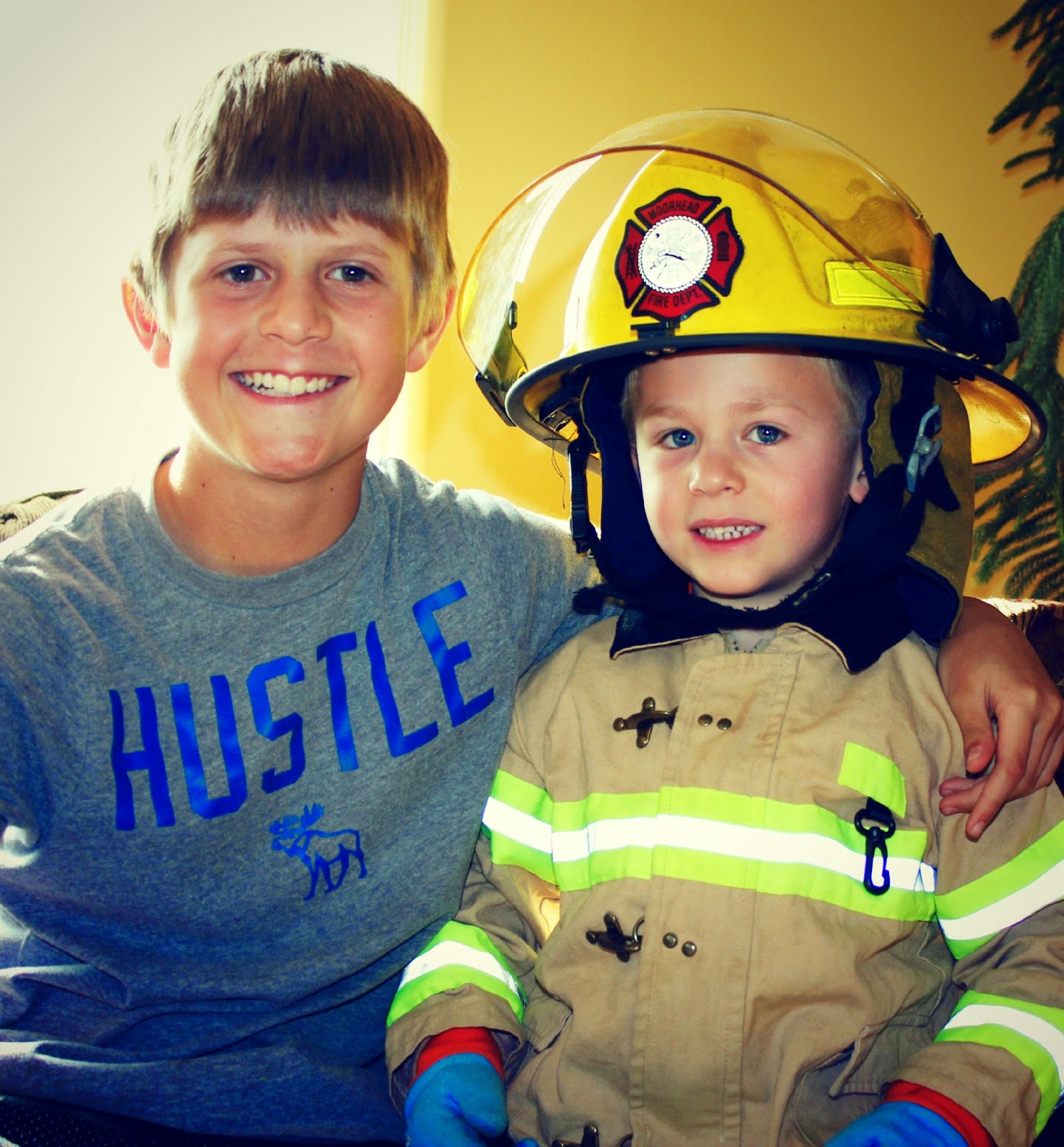 Our next day with Ethan and Matt, we took the boat out to the lake.  While I sat on the beach, the rest went out fishing. 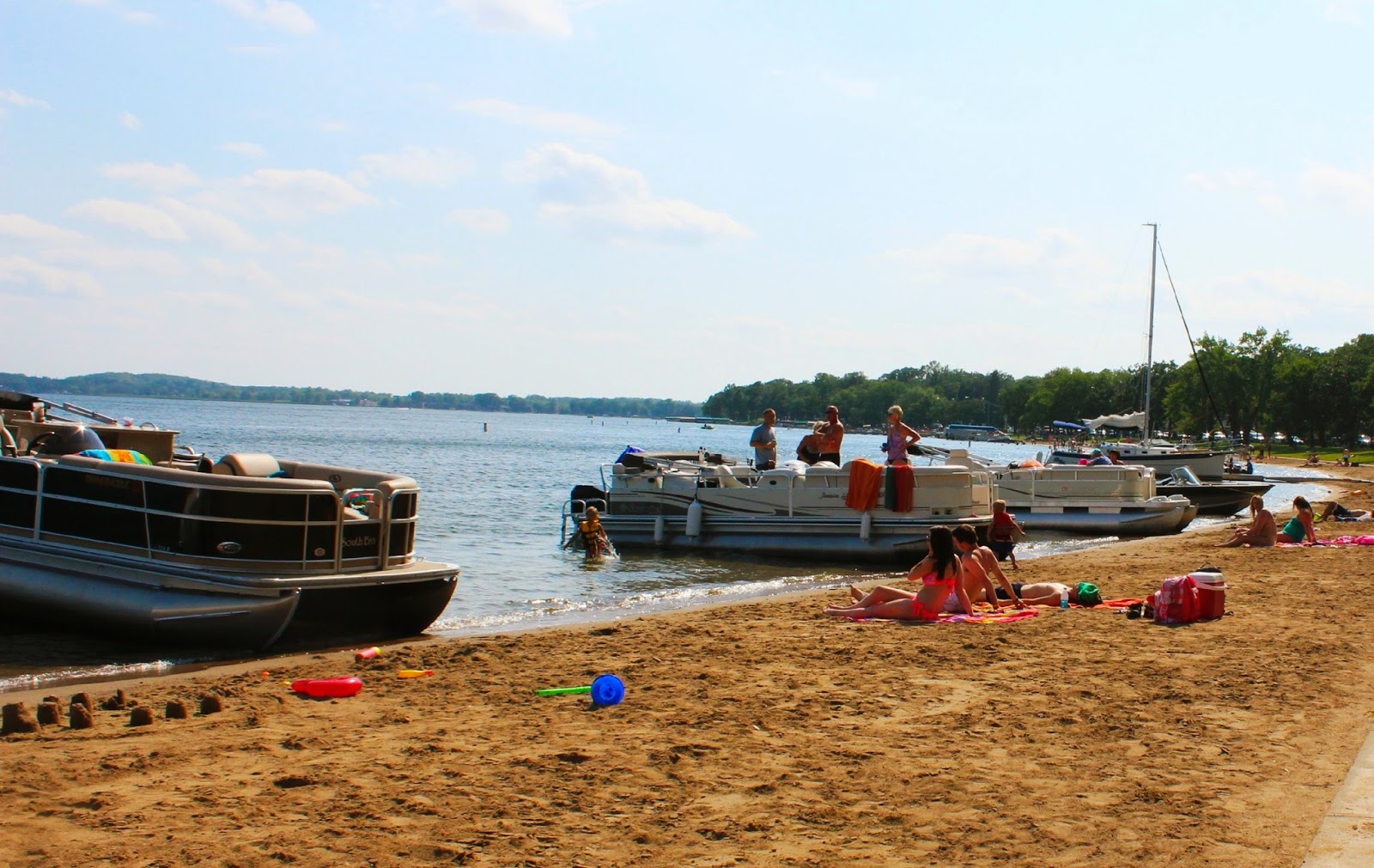 Suddenly, my phone buzzed, and this image came through.  Nolan had snagged a muskie, a BIG muskie, by the looks of the tail end diving back down into the water.  But alas, the size of the fish, Nolan's eagerness to catch it, and his meager 6 lb line was not enough to land the fish.  It sure has made a good "fish tale," out of that fish "tail." 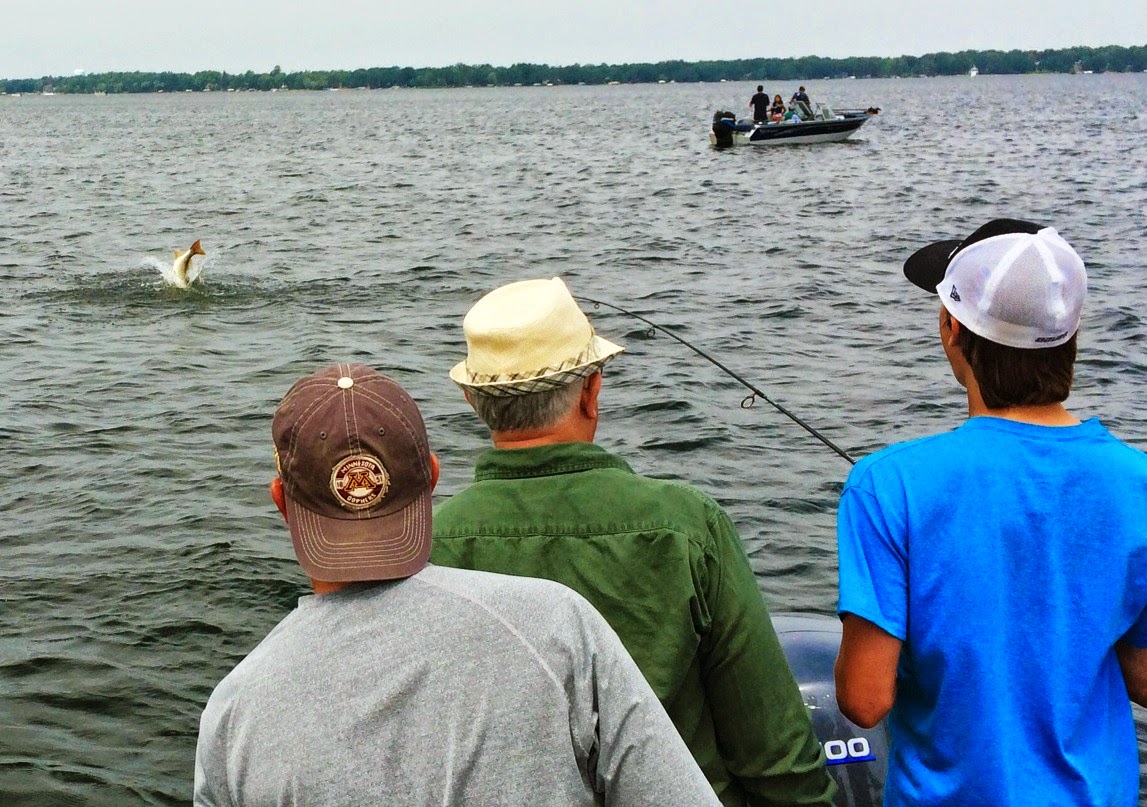 After a pizza break at Zorbaz, the boys left to go home with Matt and Ethan, while Rick and I took the boat back across the lake. 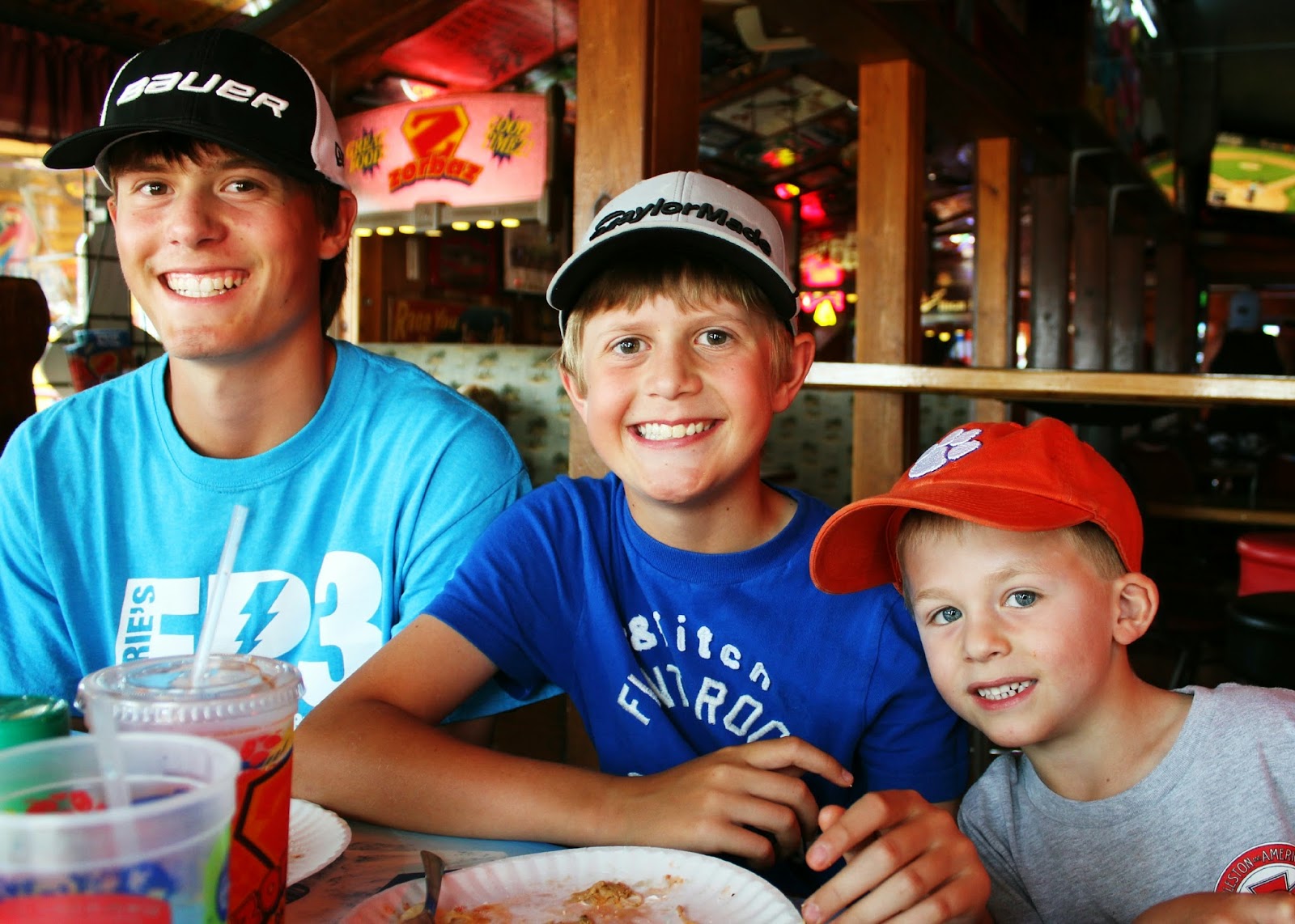 The sand bar was filled with pontoons, music and quite the party atmosphere. 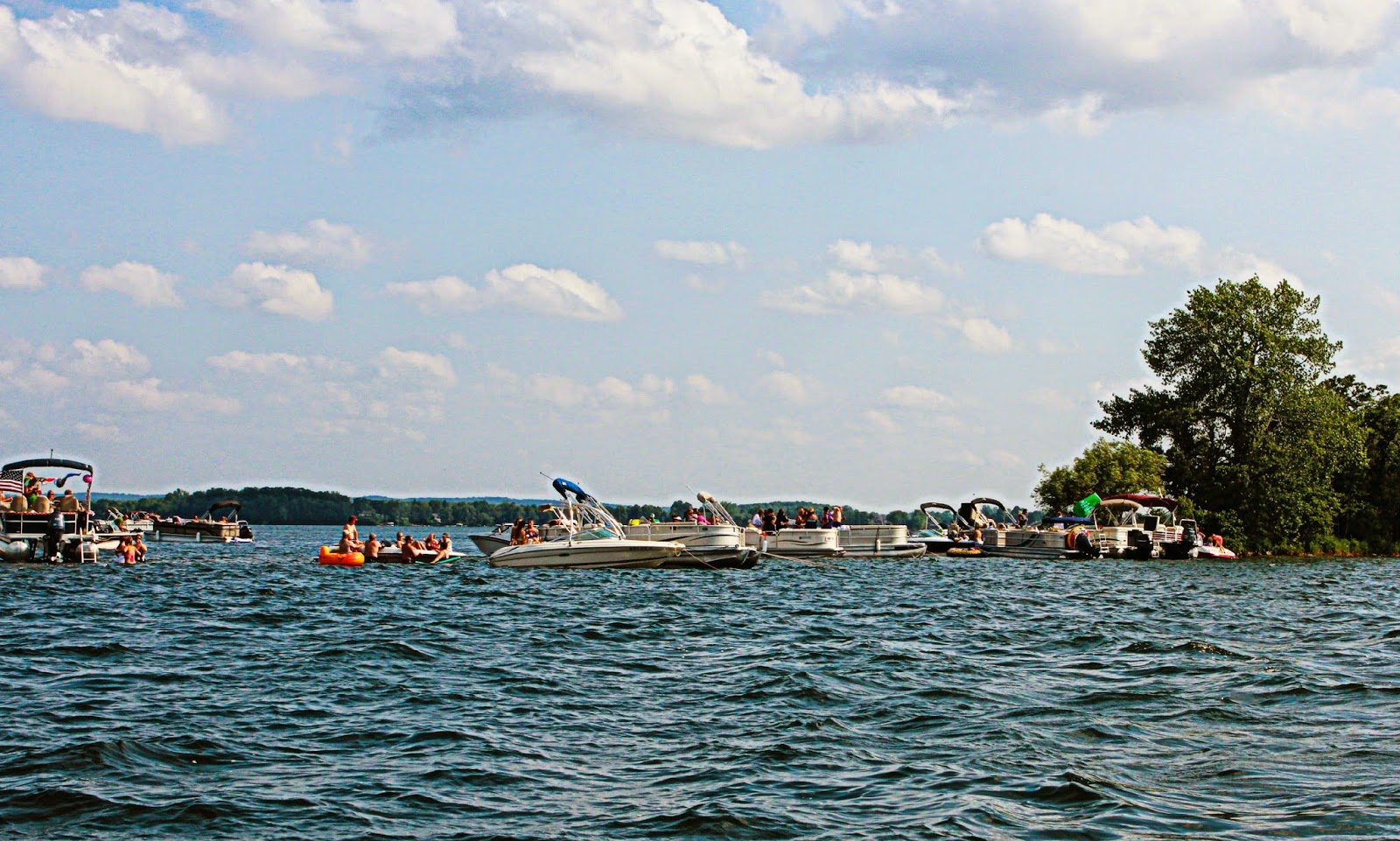 But the wind had come up, and the water was getting choppy. 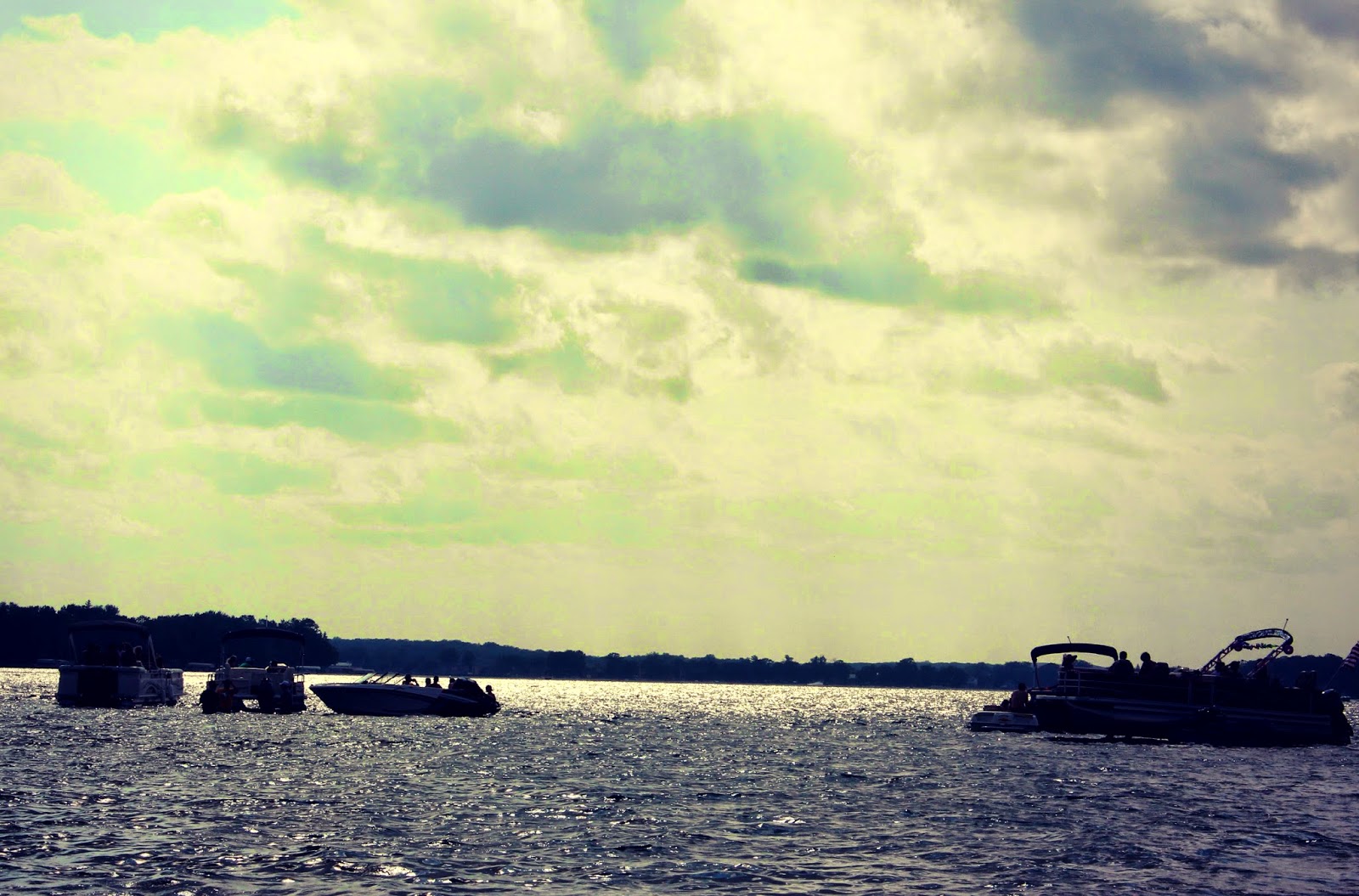 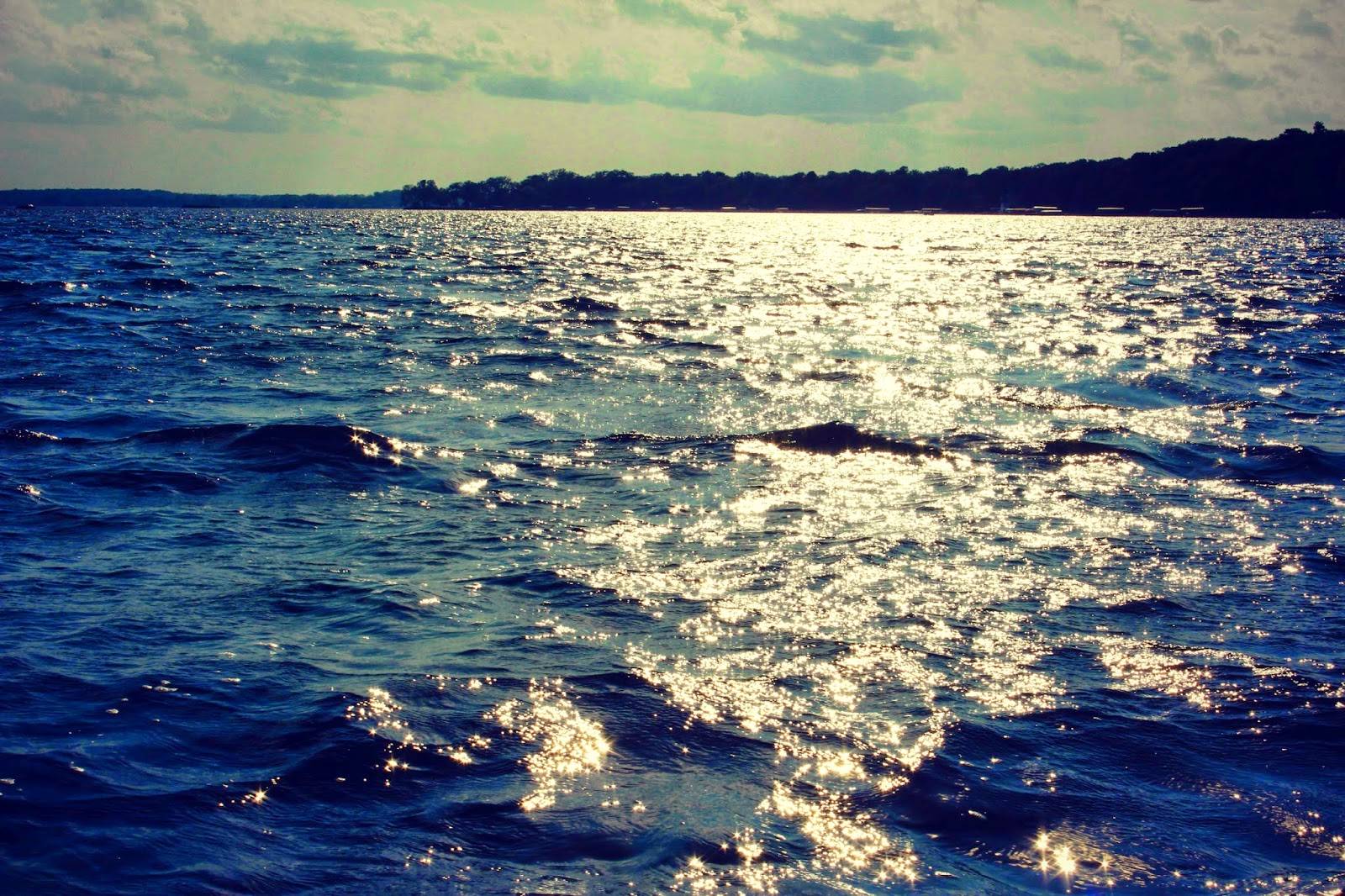 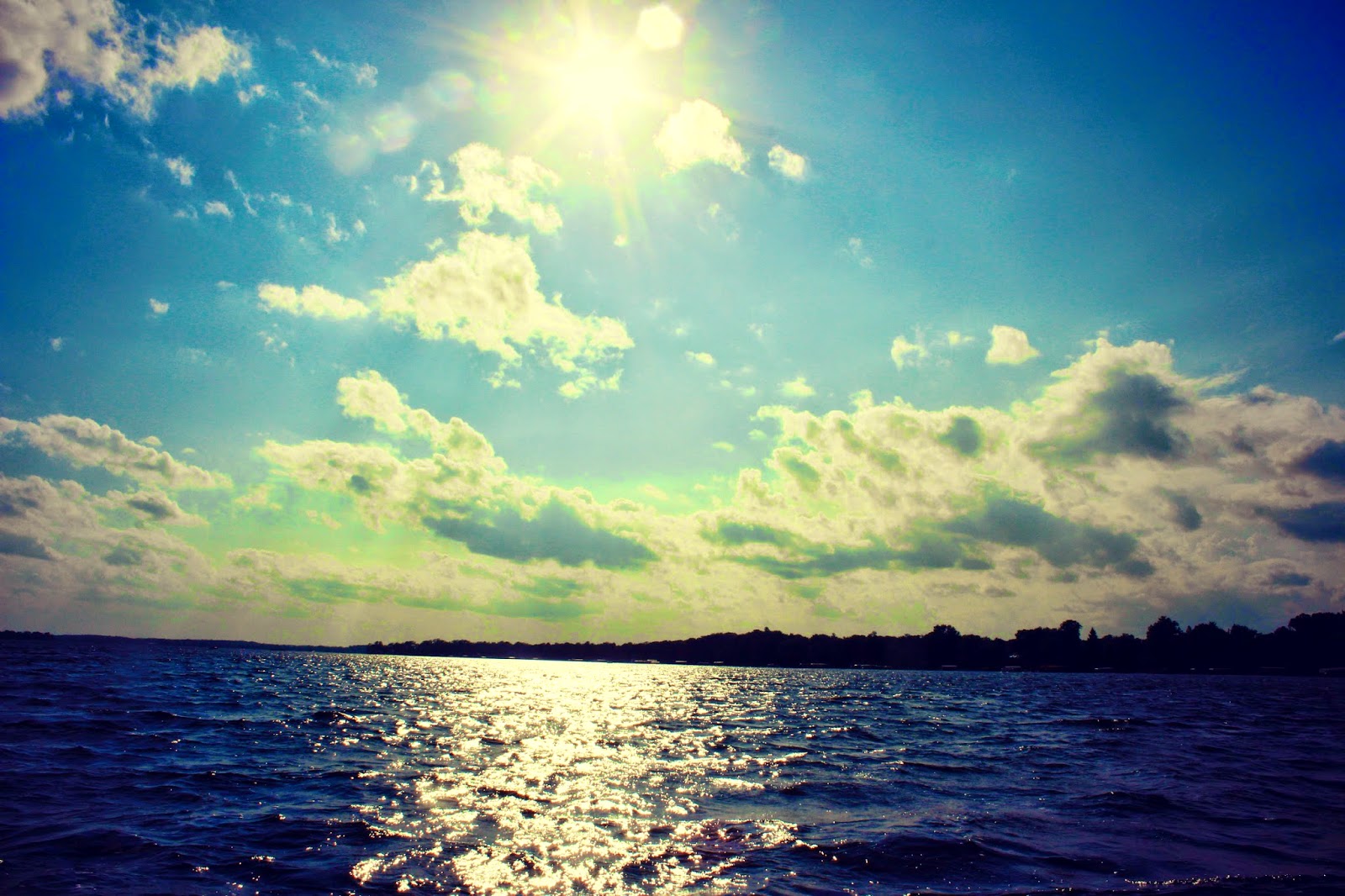 When the white caps on the top of the waves started to appear, we headed for the boat landing and headed for home.  Our next adventure was just around the corner...

The next morning we packed up the car, and headed to Silver Lake Recreation Area for a Westra Family Reunion.  It was a beautiful day. 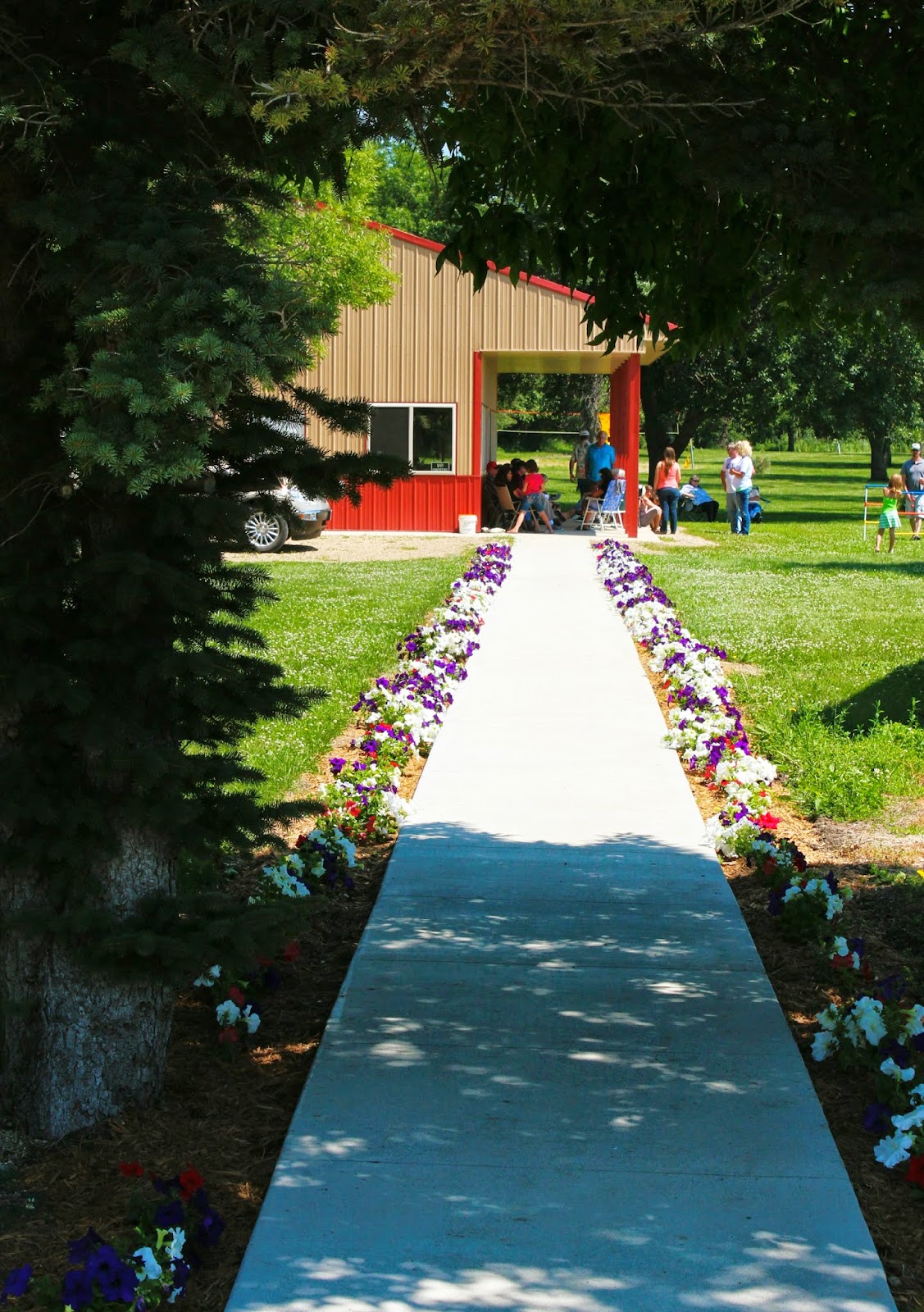 We just needed Ethan's older sister, Mackenzie, and his little brother Bennett to join us for all the Westra cousins to be together. 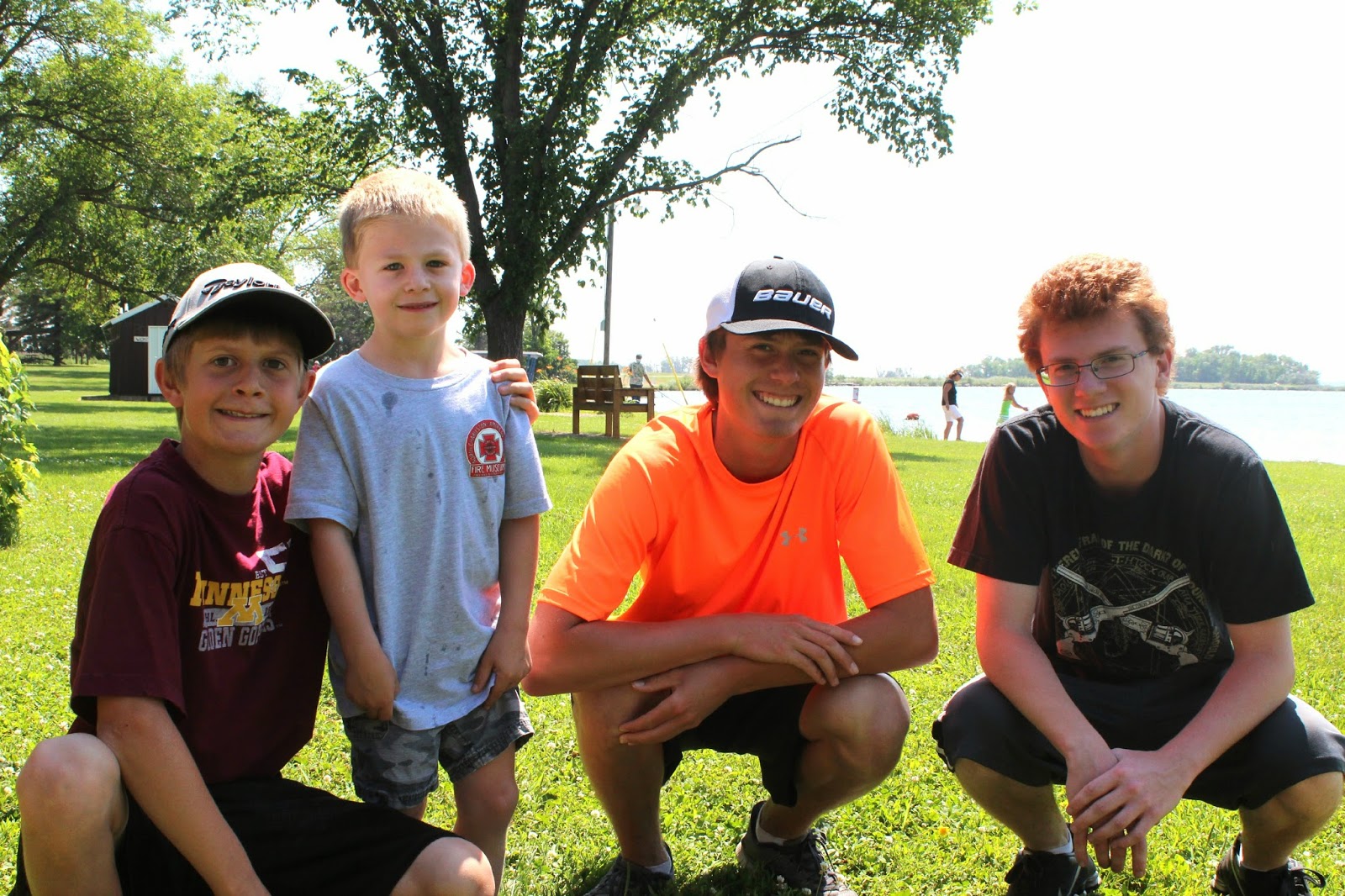 One of the fun ideas the Westra Family does to raise money to pay for the Shelter, is hold an auction.  Each family is asked to bring an item to be auctioned off.

There were small lap quilts, embroidered dish towels, home made jelly, bread, and all kinds of fun and unique items.

I loved these towels- I have an entire quilt my Grandma Held made for my bed out of these prairie women.  I was so happy to win!  I also got some home made apple butter and bread. 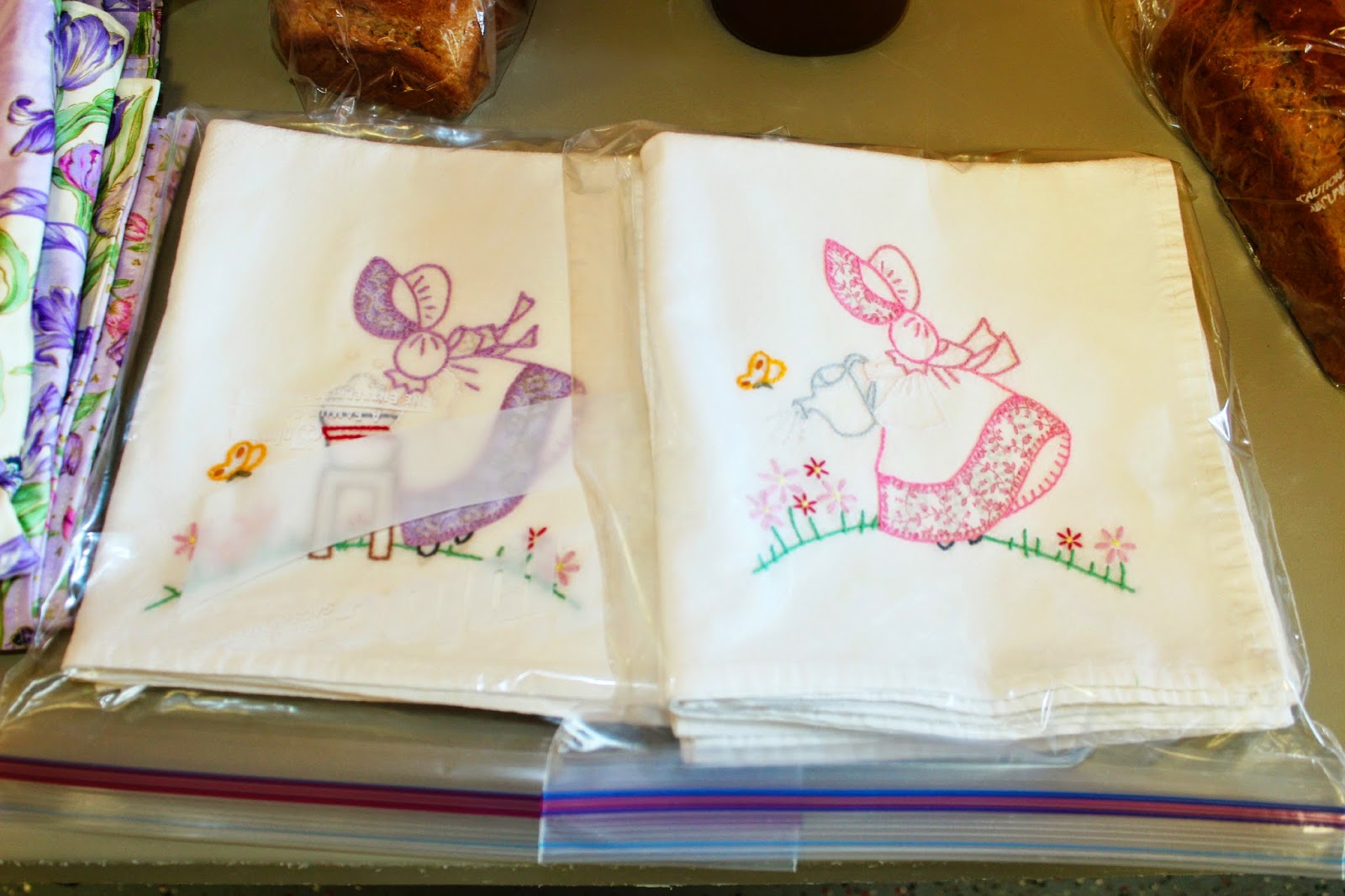 And then there was Colton.  It wasn't the hot wheels cars he wanted.  Or the water throwers.  Or the soccer ball.  No. 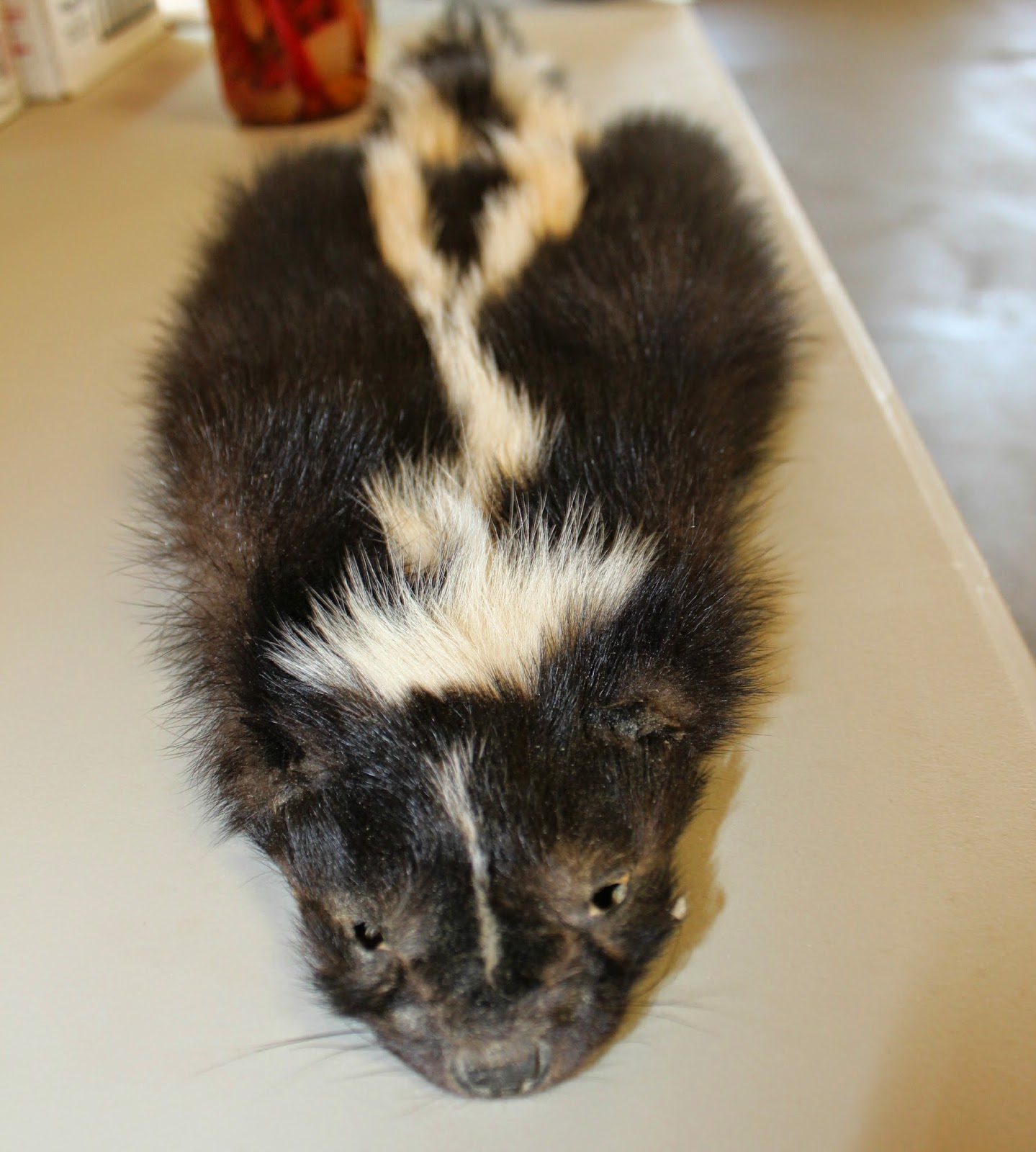 And so for 18 of his own dollars- he walked away with his newest "stuffed animal."

I can barely stand to look at it, let  alone want to walk in his room where it is so artfully displayed.

If I'm being honest… it was an emotionally exhausting week last week.  For so many reasons, more than I can possibly say right now. I feel a post in the making however, and soon hope to come share more.

I went with my mother to see her liver specialist.  Her latest ultrasound shows that her kidney's have begun to atrophy, which is part of her disease progression.  Her creatinine levels are high too, also in keeping with her kidneys and their present condition.  Her blood sugars are all over the place.

And yet, her doctor is a ray of hope- he smiles and encourages, acknowledging she looks good, despite some of the ongoing health concerns she faces.

She has been working so hard to not just maintain, but to improve herself.  She has worked to lose all the excess fluid she carried for so long.  She dropped over 25 lbs of fluid.  Her doctor was impressed.  And when she broached the subject of traveling to see family, her doctor said this fall was the time for her to do that.

He looks me in the eyes and tells me now is the time for mom to do that.

I swallow hard, and smile big, and nod, understanding what he is telling me.

As mom goes to say goodbye she tells him, "Every morning I just plan for today, and hope for tomorrow.  Nothing more I can really do."

Such wisdom, in the smallest, everyday exchange between a doctor and a patient, as witnessed by her very humbled daughter.