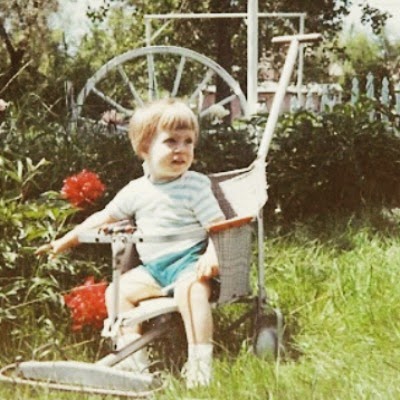 Its one of my favorite photos.  I am out at my father's family farm where he grew up.  For all I know I am sitting in a stroller once used for him.  And I am wearing some blues shorts and reaching for the peonies and my love of those two things hasn't changed.

He strode into the room, shook hands with a big smile and sat down right away.  "Lets look at your CT scan from yesterday."

As he matches the one from January next to the one from yesterday, I see the changes before he mentions them.

There are what look like white "clouds" billowing around several places in the lung. He said to him if he didn't know I had radiation, it would look like pneumonia.  But he felt it was scarring from the radiation instead.  "How is your breathing?  How do you feel?"

"There is also a pocked of fluid under your right arm that looks concerning."  He is more serious when he says this.  And is letting it sink in.

But my mind leaps forward quickly and says "Do you think its a seroma from my recent breast surgery on that side?" (a seroma is another term for pocket of fluid)

He thinks for a moment, and says, "yes, actually that makes sense, and I am not even worried about it now."  He smiles again, and seems relieved.

So then we try to ascertain what the three areas of lung mets look like, but here is where its kind of tricky.  One area is under a white cloud… so we can't tell the status.  Dr. P doesn't even try to explain something that can't be seen to know.

The other one is also not appearing in any of the slices we try to go through.  And the white spaces that are normal, and the ones that aren't in the lungs, look so similar to me, I can't tell them apart and have to rely on the doctors to distinguish the difference.

But finally we get to one we can see, and it almost looks slightly smaller.  So we go to the slice just above and its not even there, nor the slice below it.  So we can conclude that this tumor is a little smaller than it once was.

Stable Mable, pops into my mind right away and feels like a complete gift to me.

I can hold off on radiating my lungs again and causing further lung damage.

I can keep staying on my Arimidex that hasn't caused me a lot of side effects.

In two months I will have a full PET scan to see how the rest of my body looks.  We do have to think about my ovaries that had cancer on them, and if the cancer could have spread from there.

But for now, I am faithfully leaning into, stable.

So Dr. P asks about our summer and tells me about his trip to Alaska.  He lights up when talking about it, and its refreshing to see him come so alive when he talks about travel with his family.

He examines me and is surprised when I show him my new mastectomy incision.  He says its way more extensive than he thought, but looks really good.

We laugh as my heart thumps away, rather fast, but truly we know its my anxious state.  My body will always be a little bit in fight or flight mode after that stage iv bombshell landed on me 3 years ago.

But when Dr. P realizes its been 3 years, he pauses and joy fills his face.  "That is lovely to hear. 3 years."  And he shakes his head almost in disbelief.  I so get that.  Me too, I think.

We conclude with my list of questions for him, that he so patiently answers for me.  Its nearing infusion time and he has been with me almost an hour.

We leave the exam room and as I gather my bags and go to sit in the waiting room at the infusion center, he pats my back and smiles again.  He nods his head as I say thank you, and off he goes.

I get called back to infusion right away.  My nurse is Alesha whom I've had many times before.  She wishes me an early happy birthday, and then quietly shares that it is her birthday this day.

We both giggle when my bag of Herceptin comes back from the pharmacy covered in Birthday stickers. And she offers to share part of her Birthday cookie with me. 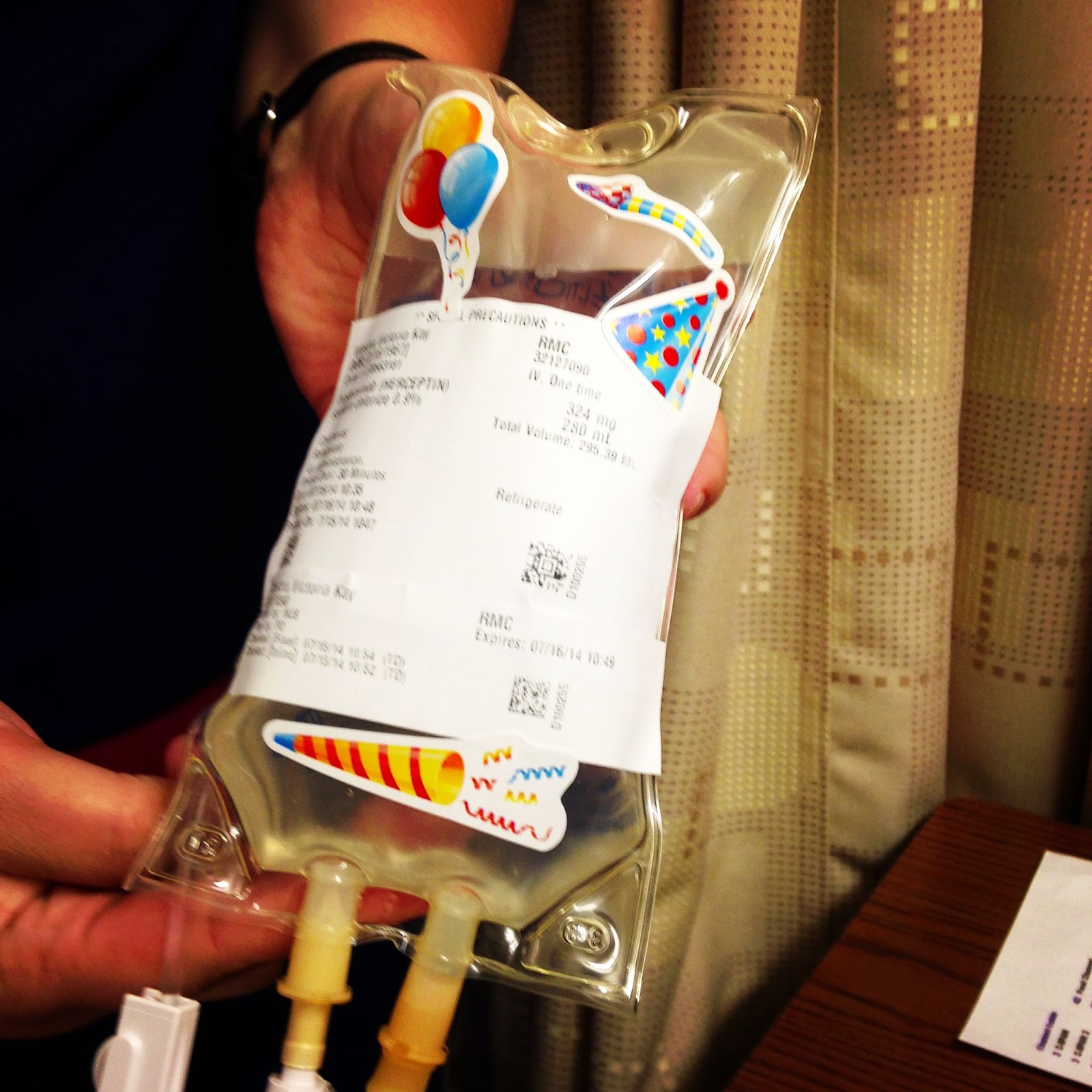 But the nausea will settle in soon.

So I pack up my bags and go outside to sit in the sun and wait for Superman to come pick me up.